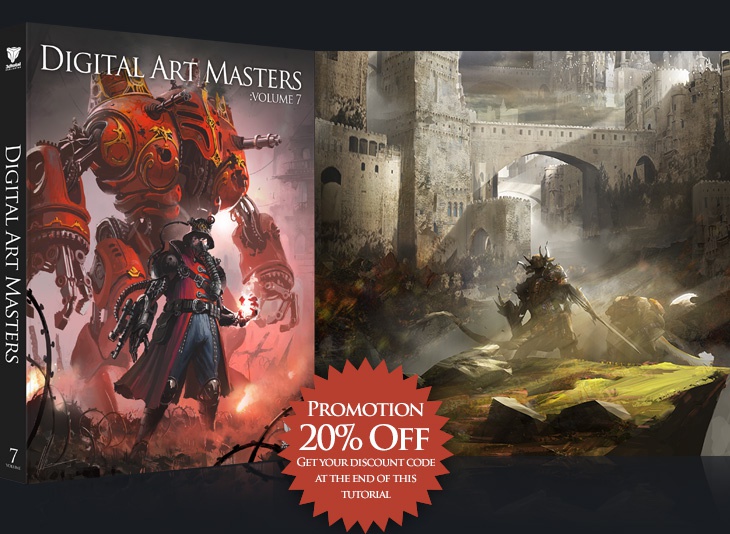 As a Senior Concept Artist on Guildwars 2 I spent my time on a variety of exciting projects. The piece in this article was actually created for the Guildwars 2 cinematic. Often when I wasn't designing props, architecture, or environments I was tasked with creating paintings for the in-game cinematics. The creation of Guildwars 2 in-game cinematics consists of a multi-layered painting created by the concept artist which is then shipped over to the cinematics team. The cinematic team would then use their insane motion-graphic skills to create basically moving paintings. Creating the cinematic paintings can prove difficult at times because you can never flatten your image. You have to maintain a large number of layers that can later be moved around by the cinematics team. Any sort of color adjustment, contrast tweak or layer mode has to be applied to each individual layer.

This specific piece was created for a set of three different shots involving a massive dragon flying over the land causing destruction in its wake. In reality I made six full illustrations for about ten seconds of screen time! Each shot had a before and after state as the dragon passed through the image. I was given a loose storyboard to set me on the right path for this piece.

As with most of my work I never have a go-to process that I use to create an image. This keeps everything exploratory and allows me to stumble upon happy accidents and new techniques. For this piece I started by taking the previous background layer from the painting I did for the first shot in this sequence (Fig.01). I ran a simple motion blur filter on it to knock out all the detail but maintain the values and palette already established (Fig.02). I often like to reuse older paintings and layer in them in a variety of modes, along with brush strokes, to create an abstract base to begin with rather than a blank white canvas. 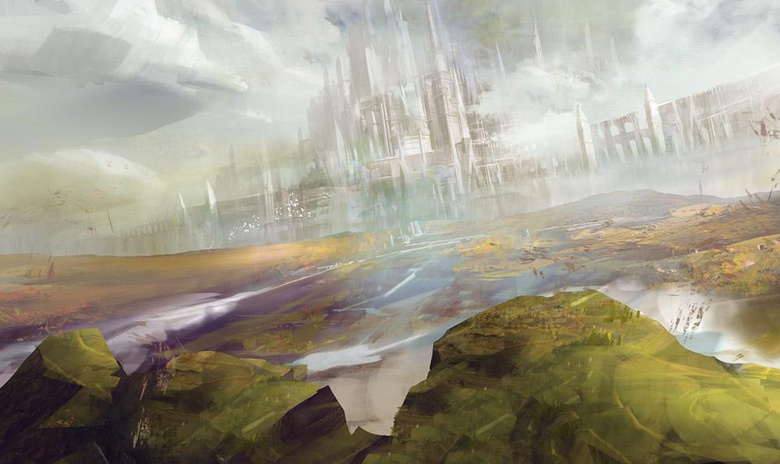 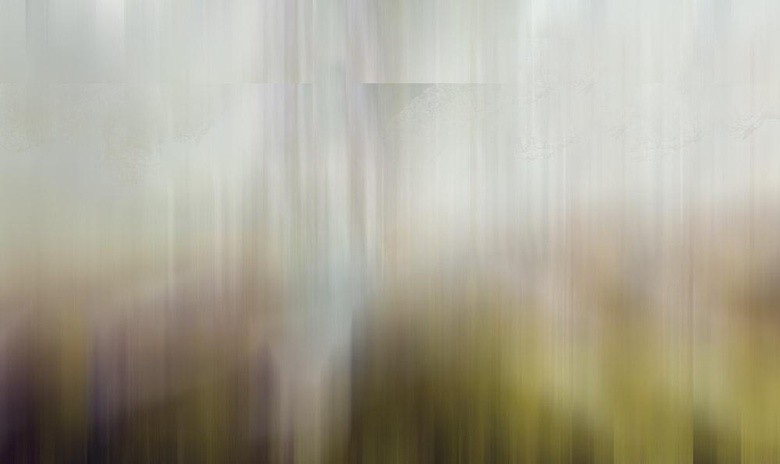 The next step in this piece was to begin with the foreground elements. In accordance with the established story board I would need a couple of characters placed in the foreground to view the oncoming destruction. To do this I simply painted an abstract chunk of land and a simple loose silhouette for the first character (Fig.03). After I had the base set up I began to render the first character, added a second one and then developed the chunk of land supporting them (Fig.04). I also threw in some quick brush strokes to block in the effect that could allude to a dragon flying by. I then decided to block in loosely what I imagined the dragon to look like (Fig.05). The fun thing about these cinematics is that they are super stylized so you can have fun with shapes and paint strokes to create everything. I also had to keep everything on layers so I could easily hop around the painting and be able to turn elements on and off. This helped maintain my interest and prevented me from spending too much time rendering anyone element. 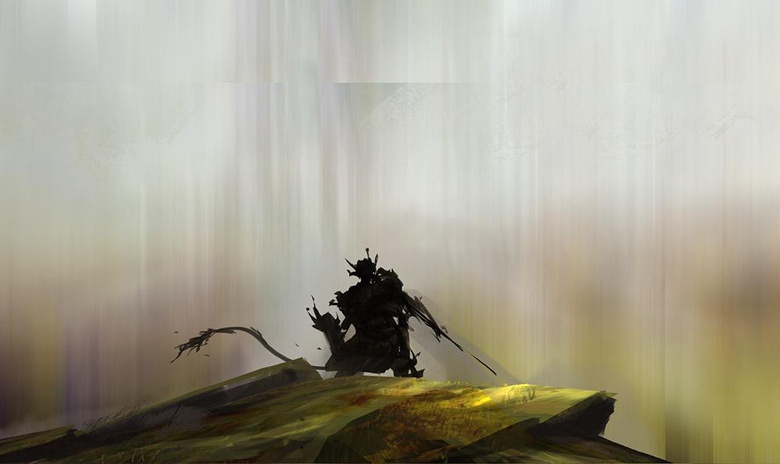 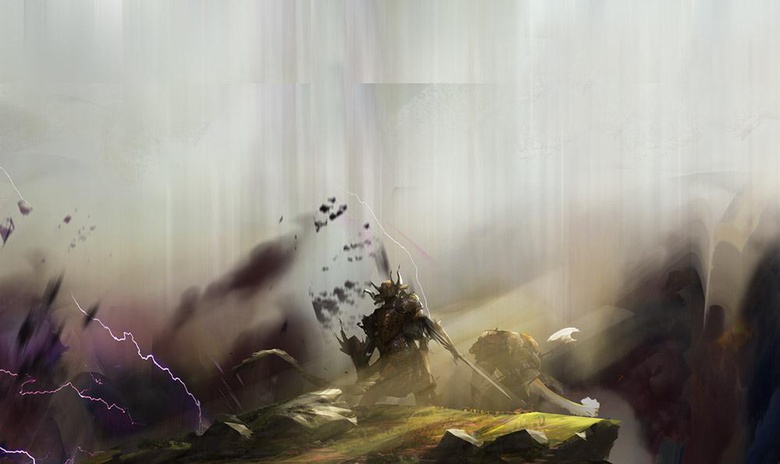 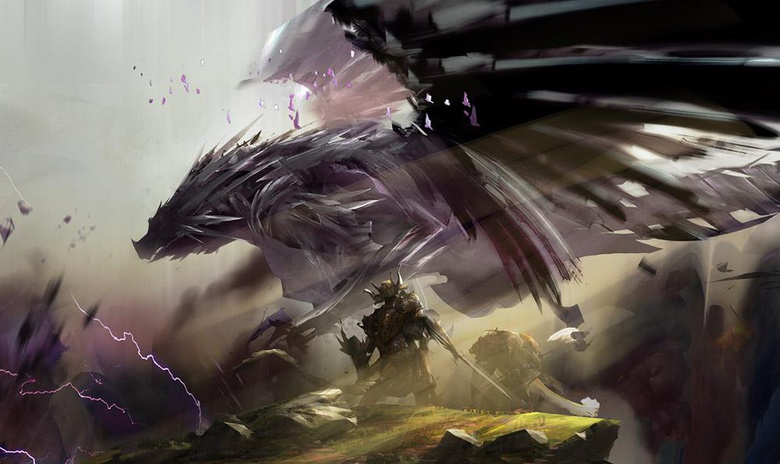 Now that I had the foreground elements blocked in I moved onto the most important aspect of the piece which was the city-like elements in the background. I continued with the abstract method of establishing the piece by blocking in selections with the Lasso tool. I then sampled some of the motion blurred background and darkened it (Fig.06). Now with a very loose idea of what I wanted I began to use a simple square brush to block in larger shapes, add textures and use the Warp tool to drop everything into perspective (Fig.07). Due to time restraints being imposed on this piece I also employed some photo reference as textures to quickly achieve some finer details this piece. 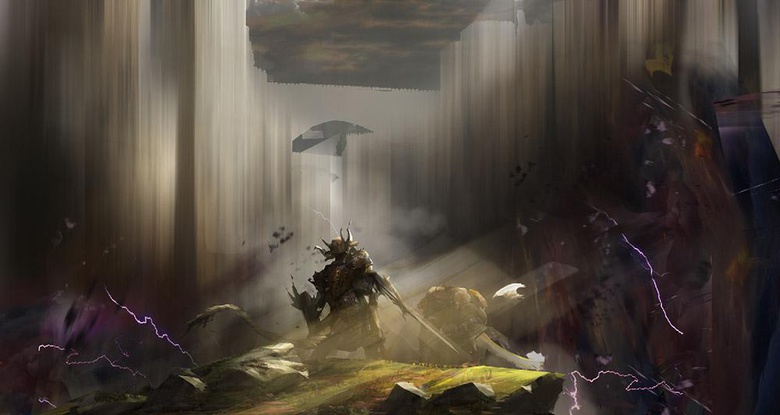 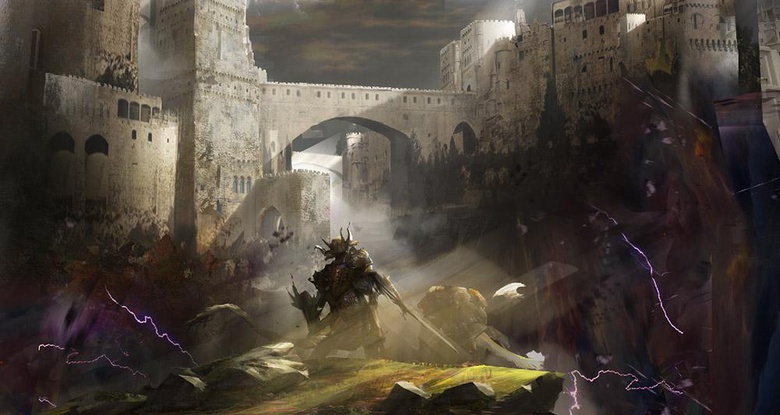 With a simple background base established I decided I needed a bit more overall depth. A quick way to achieve this was to simply copy all of the painted city elements and paste them into a new layer, lighten them, and then drop them a layer back (Fig.08). I then painted into certain areas and added some more elements to really lock in the depth. Since I had added a bit more depth, I now wanted to bring some of the city elements closer to the foreground. This also helps lead the eye from the foreground all the way to the background. I quickly blocked in a few shapes with a brush and then pasted in the previous detail to continue building the city out to the right (Fig.09) and the left (Fig.10) of the canvas. I also of course added the mandatory fantasy birds in the background for scale. 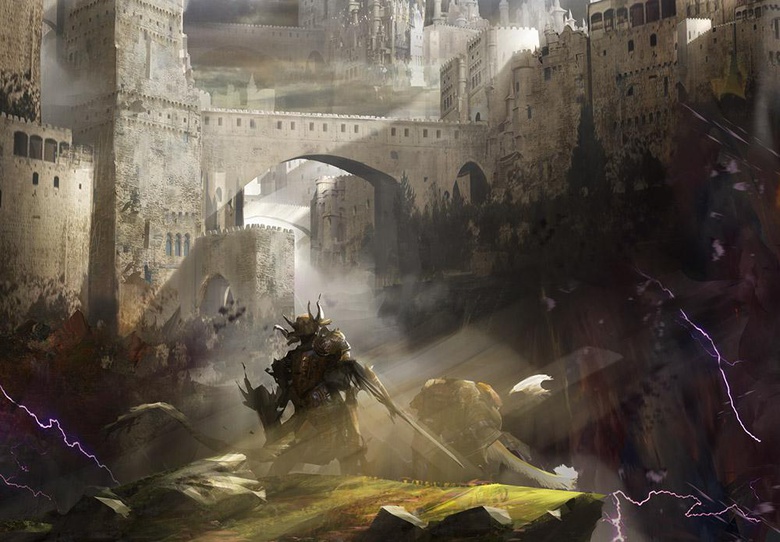 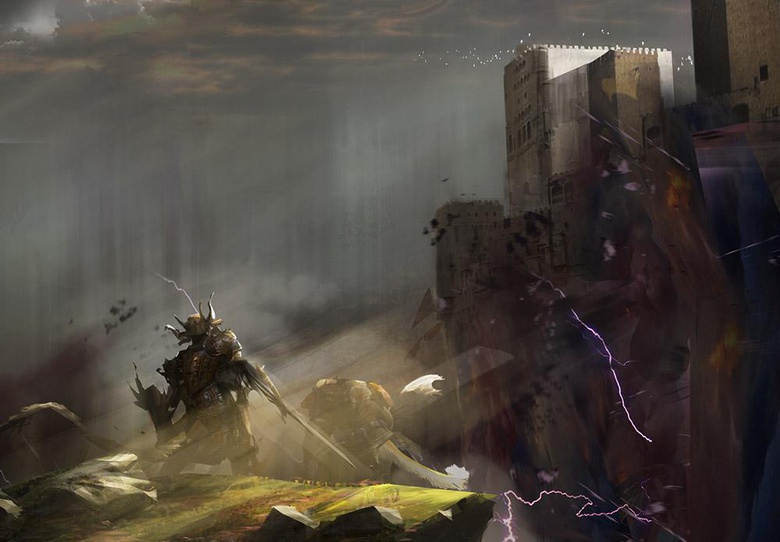 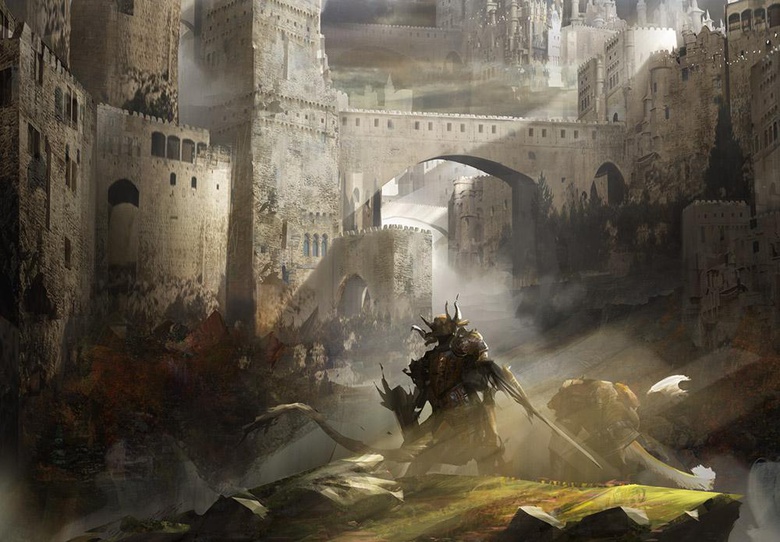 At this point in the process I stepped away from my computer, grabbed some snacks, ran some laps around the office and then came back to the painting to correct any issues I may have previously missed. After some slight polishing I decided this piece was ready for the pre-destruction phase of the shot. I've included a quick glimpse of the 'post-destruction' painting after the dragon has flown through the image (Fig.11). Once again this was done with a mind-numbing amount of layers and effects, but in the end it all paid off when I got to see it in motion. 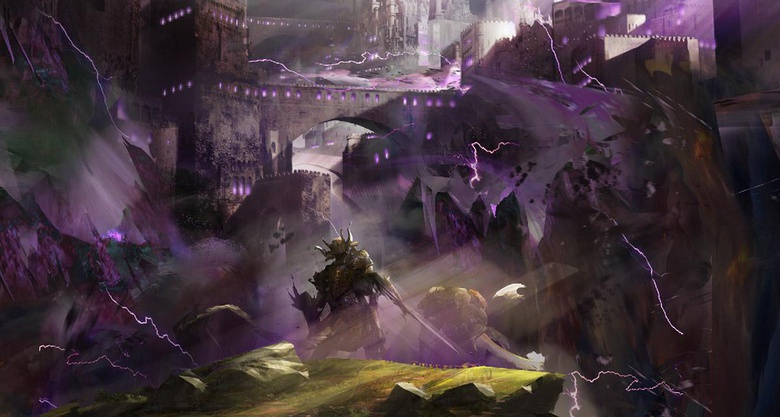 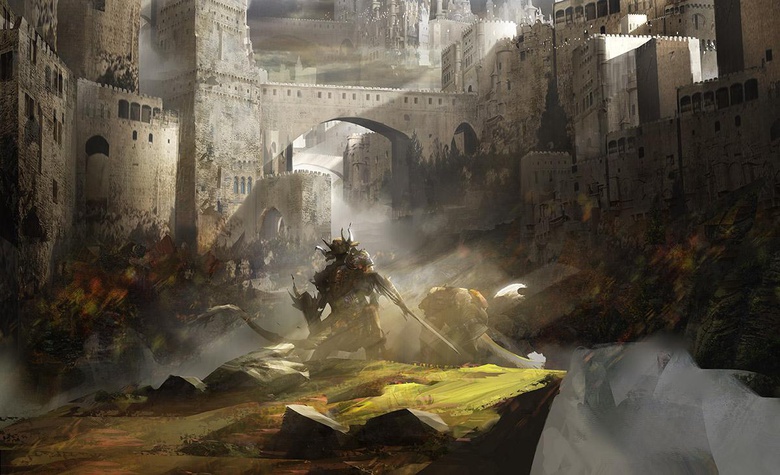 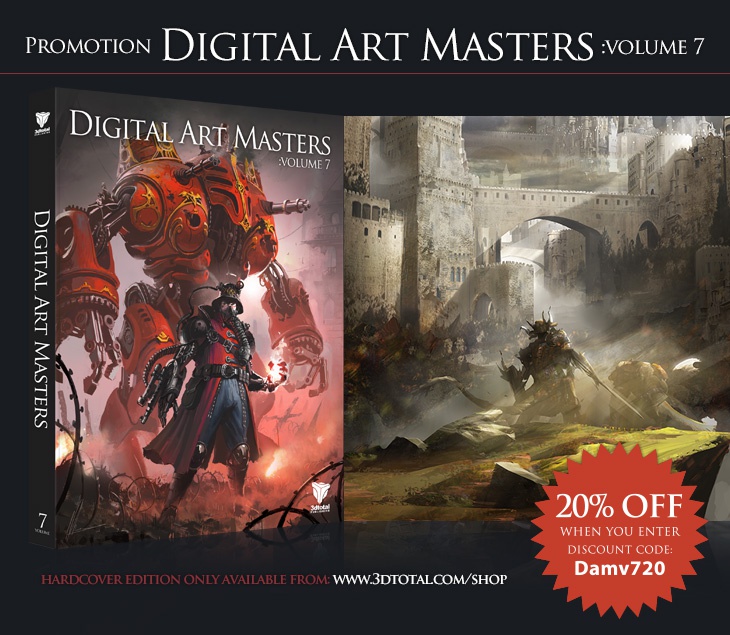