Miguel Nogueira continues designing a cyberpunk shaman with part two of his tutorial series, focusing on the sculpting in ZBrush…

This part will be trickier, but nonetheless fun. We’ll go to ZBrush and attempt to sculpt hard surface robots. It takes some practice and patience to get used to doing this, the trick is to find a method that works for you, and I’ll show you what I found that works for me to get a hard surface look. Just like the drawing phase, it involves making a series of passes to our sculpting, of blocking to refinement. 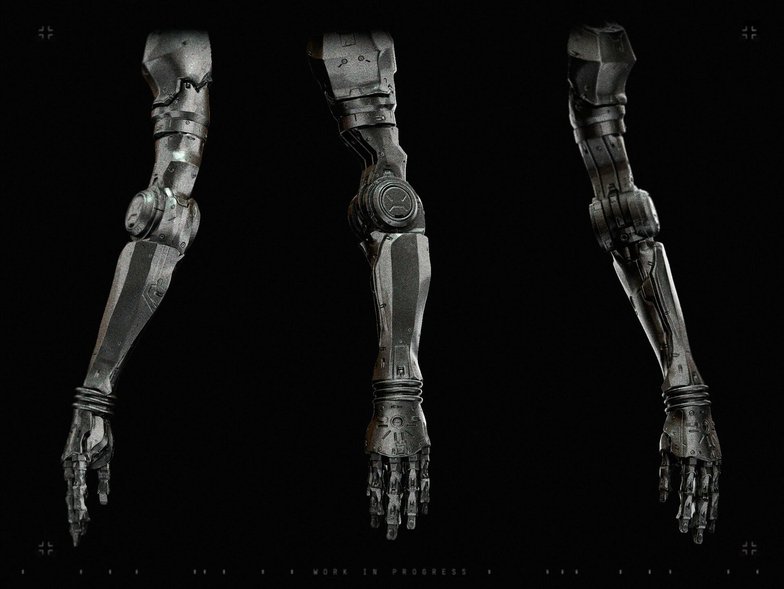 We’ll try to achieve a refined sculpt by using a base mesh to work on, approaching something like this may look tough but the trick is approaching it in bite-size pieces.

We’ll start to exemplify the process on a simple sphere. ZBrush users should be no strangers to this, I’m using the Clay brush to build up a volume first. What we do here is to bring in some clay to have a base to work on; you do not need to be precious with this stage. 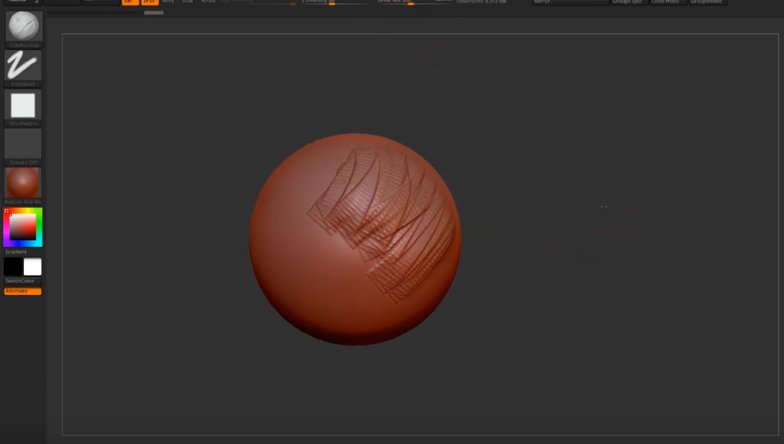 The irregular use of the Clay brush all over the model will allow you to be a bit free and find the forms you want for your mech.

You should explore as much as you like, this is the time to push, pull, pinch, and allow yourself to be crazy with forms and silhouettes. Only by experimenting you can measure what’s too crazy and too literal and easy. If anything goes wrong, it’s digital art, so you can always go back and find balance. 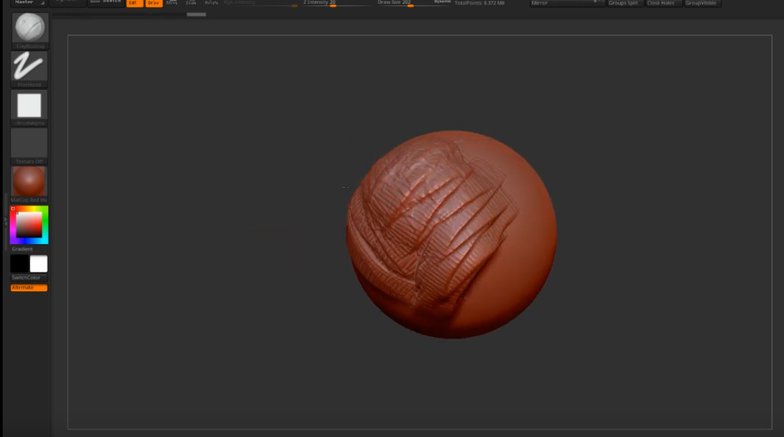 This stage is no different than the previous one; instead, we’ll focus on pushing it forward and backwards, second guessing what we have in order to find a good sweet spot

Once you’re happy with the forms you have achieved, you can start using a trim brush to even out the chaos from the clay; this should allow you to feel how the hard surface will feel later and also teach you when to stop building forms to then tackle refinement. It’s like taking a knife and refining a clay sculpture, cutting parts of it, carefully. 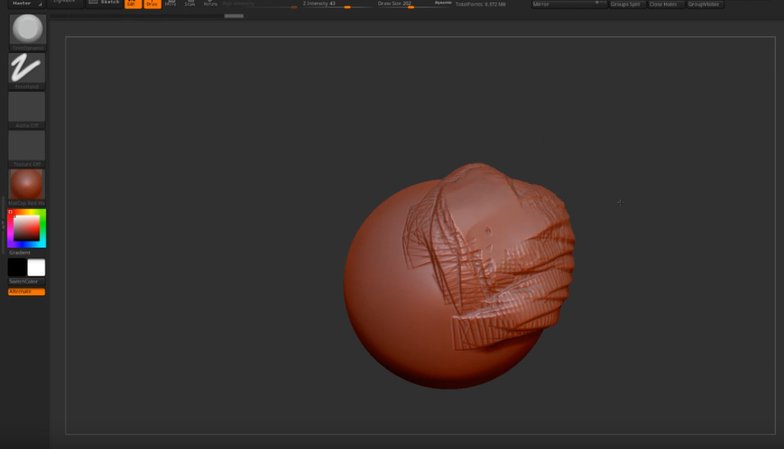 By using a trim brush, we can quickly and effortlessly turn any random, over-textured blob into an even form

Refinement of other faces

Refining one side of the sculpt is one thing, now you should go around it and apply the same brush again, taking your digital knife out to carve out different hard surface faces. As soon as these newly created even surfaces meet on the edges, it’ll already start feeling a lot more of a hard material, rather than clay. 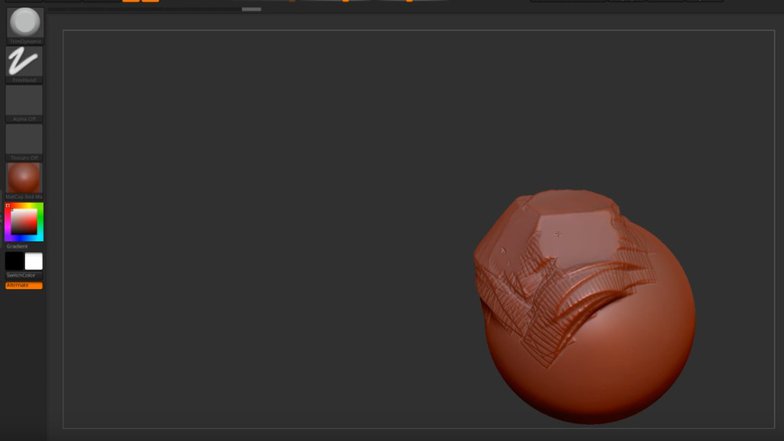 In this stage, you can still experiment, even though we’re getting results, we can still refine more later on. Always push and pull the forms until you find something good

Being original is hard, but mistakes can make your sculpt feel creative. In this image, I pushed the trim brush too hard and ended up making a concave face somewhat. This doesn’t mean it won’t work like this, because there are hard surface products out there that do this sort of thing, you can either embrace it to your design or get rid of it. Ideas are hardly original anymore, there’s so many people creating stuff and everything is a riff of each other, but your mistakes are yours, use them. 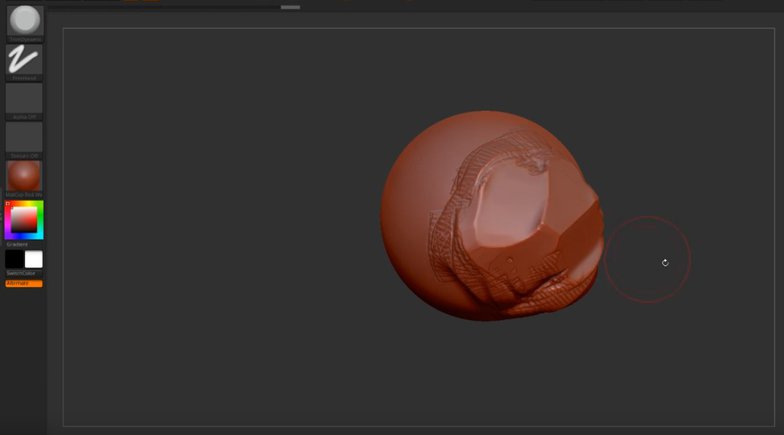 This is an example of too much pen pressure as well, so be mindful and avoid being heavy handed when sculpting

To try to get rid of concave faces or edge imperfections that may still not be dead on hard surface, or if you just want to push the hard surface look further, you can use a different brush to strengthen your palette of tools. I find the Polish brush to be really good at evening out the mesh further, and reach places that the Trim brush can’t get to; they’re both wired for different looks and one doesn’t do what the other does, so using them both in different stages is key to a stronger hard surface look. 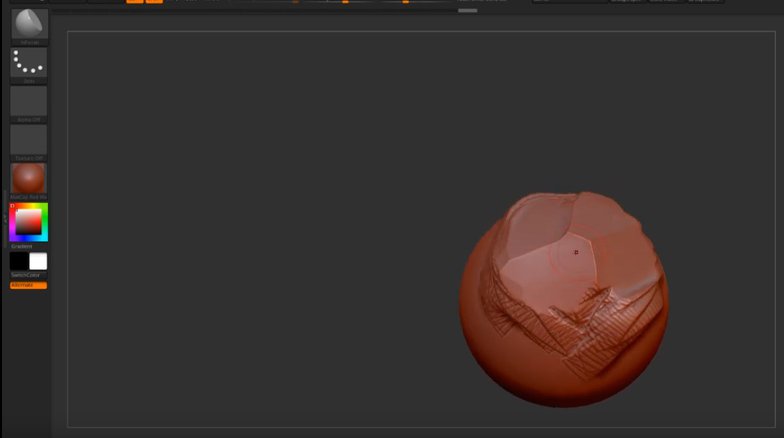 Just like in the drawing chapter, where we do different detail line passes. In here, we are doing different refinement passes as well, but with sculpting

Now that we get closer to the hard surface, linear look we want our mesh to have, it’s time to take care of the edge details, I find a Pinch brush in Zbrush, a great tool to pinch the edges together and get a tighter look, finishing the job that the other two brushes didn’t do as well, as they were worried about the face linearity more and not it’s edges. 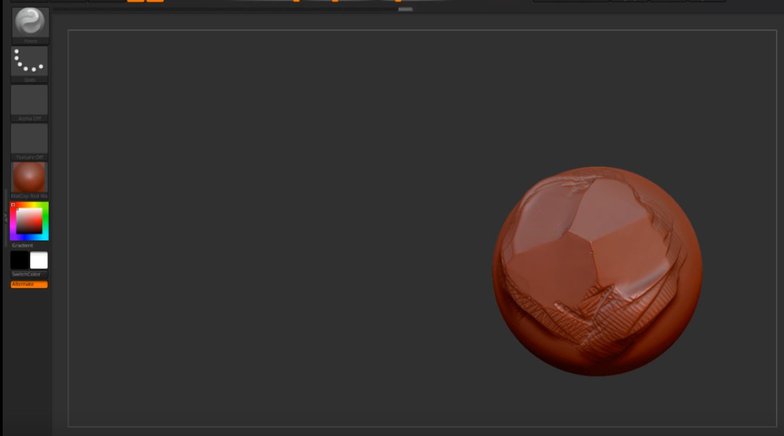 The Pinch brush can be used for pinching and bringing mesh faces closer, it’s like pinching things into place and leaving them at the spot, hence the name

Now that we have our mesh mostly in place, you can experiment with the Polish brush once again, sometimes it gives even tighter results. Be careful not to overwork areas that are otherwise fine, be mindful that polishing too much may ruin it as well, as some of these brushes are destructive if you have a heavy hand (too much pen pressure). 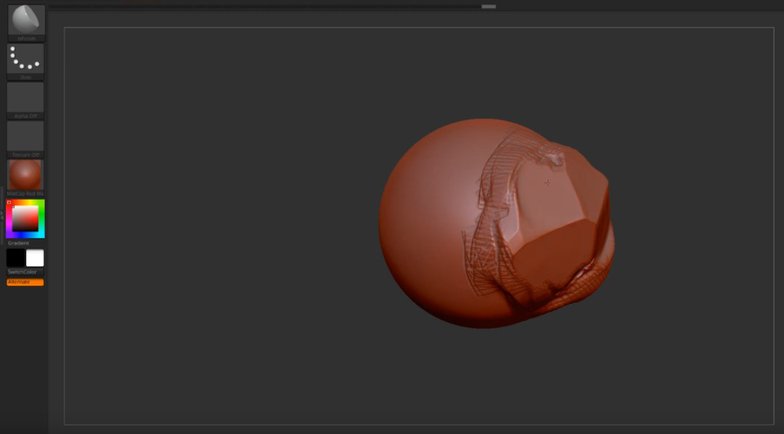 By now we should be about done with the hard surface look as base, but always experiment and explore, you never know what you may find

Once we’re done and happy with the look of the mesh, we can either bring decals, alphas or even use the Standard brush and Dam Standard brush in ZBrush to cut some mechanical cut lines into the mesh. Properties like this help sell the concept of hard surface, like real engineers got together to build it and had to cut into some places to make it fit, in a factory environment. Story-telling helps function and vice-versa. 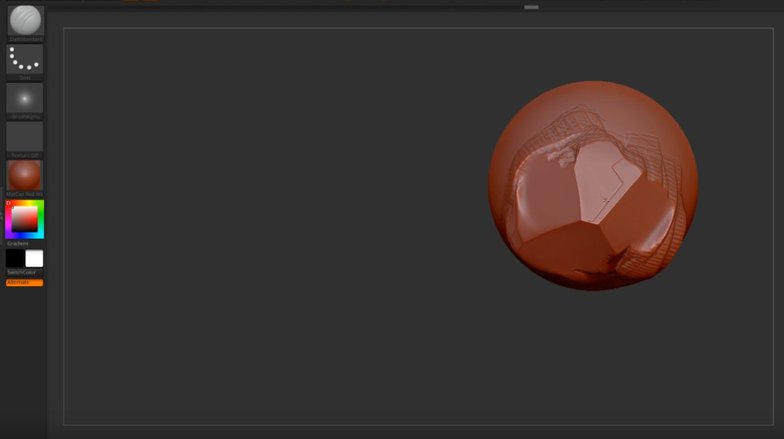 Always think about rhythm and shapes. Placing screws and other lines arbitrarily may feel stale, look to entertain with your visual language

If you know your character is a robot but they are still getting two arms and two legs, there’s nothing wrong with using a base mesh and sculpt on top of it, it’ll speed up the process. You can even use ZBrush default base meshes!

Read chapter one of this tutorial here