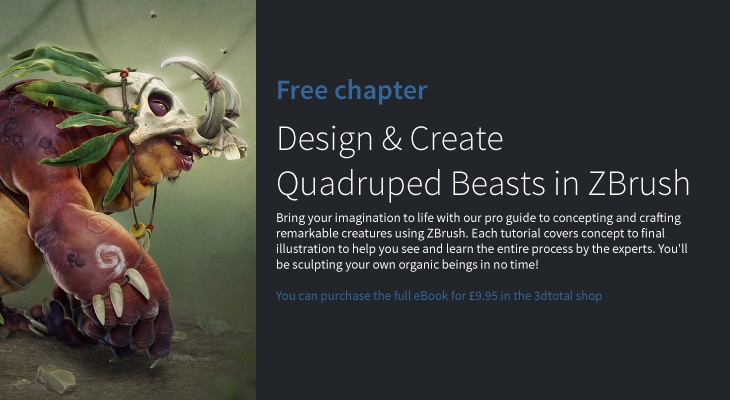 I started with some fast sketches of what I had in mind. I already had a few ideas about some of the features I wanted on the creature, so I included these in the sketches. These were things like the skull mask, beads, robe, leaves and the overall voodoo feeling. At this stage I try to not work on one sketch for too long, but rather explore and try different proportions, creating many fast and loose sketches and silhouettes. (Fig.01). 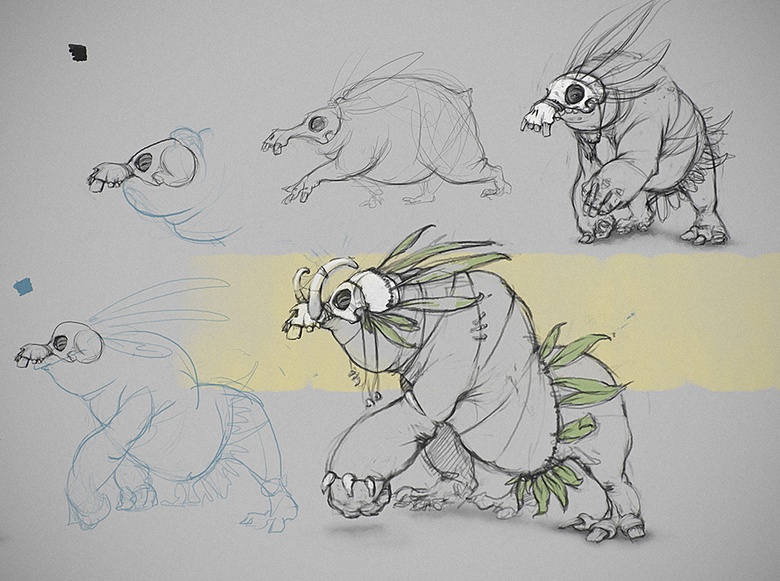 When I come to a point where I'm clear about what I want, I continue working directly in 3D, where it's easier for me to understand and visualize the creature's forms and proportions.

So at this point I moved to ZBrush, where I used ZSpheres to build the body of the creature and then continued to DynaMesh it. The coolest thing about DynaMesh is that it is super-fast for creating concepts and exploring your ideas directly in 3D. At this stage I tried not to stick to my concept too closely, but rather developed it further. I worked on a big scale, mainly with the Move and ClayBuildup brushes, set to a larger brush size. I tried not to spend too much time on one part of the model, but to move across it and develop it evenly (Fig.02). 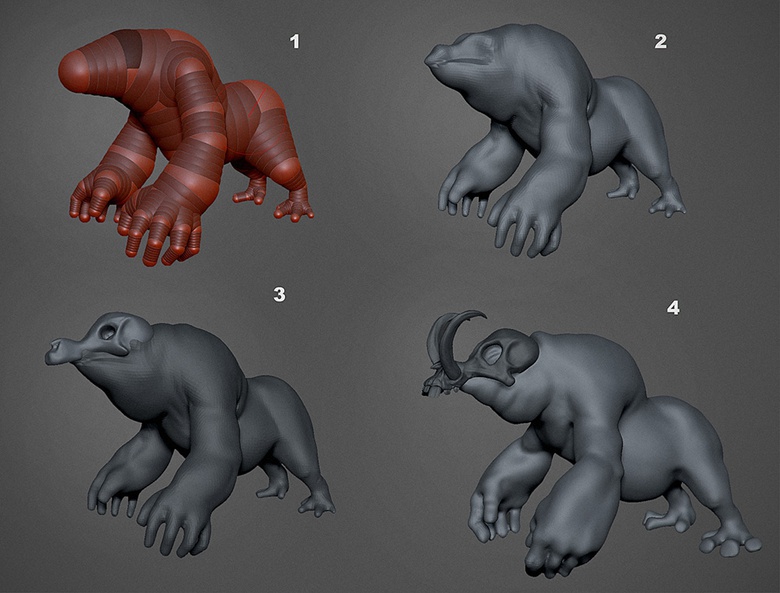 Also using DynaMesh, I created really fast and simple meshes for the leaves, skull and the tusks, as these elements play an important role in the creature's silhouette and it's better to keep them in mind while working on the body.
I used quite a simple technique for making the leaves. I created a plane where I masked an area to look like a leaf and then, using Extract set to a low thickness, I created a mesh from the mask. I then DynaMesh'ed and copied (Ctrl + drag while in TransPose mode) across the areas where leaves will appear (Fig.03). 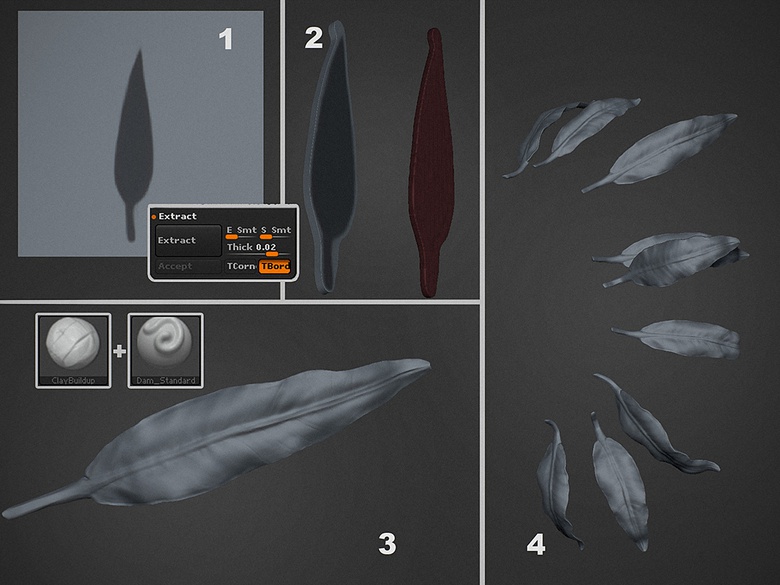 I created the skull from a sphere with a DynaMesh and to begin with I used the CurveTube brush for the tusks, then I used DynaMesh to detail them further.

With all the main forms in place, I continued working on the body. At this point I still refrained from adding in smaller elements yet, such as the beads and robes, as all the small meshes would make posing the model quite difficult.

Plus, these kind of elements all have a different polygon density, so it is best to add them when the model is in its final pose (Fig.04). 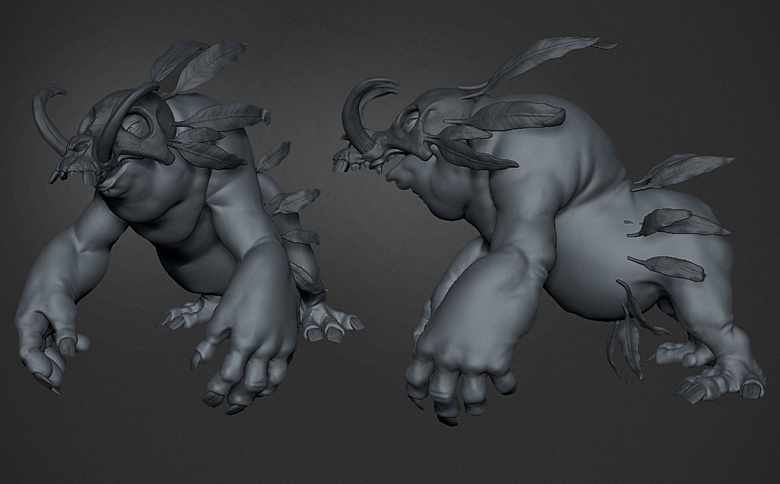 While moving to a smaller detail and up on the resolution slider of the DynaMesh, it starts to get harder to make bigger, more global, changes and extremely hard to pose the model when the time comes.

So at some point I duplicated the mesh of the body and I drew some lines that would guide the new topology using the QRemesherGuides brush. After typing in the desired final poly count I QRemeshed it, which created a less dense mesh with topology more suitable for posing and UV mapping if needed. The last thing left to do was to subdivide it several times and to Reproject back the details from the previously duplicated mesh (Fig.05). 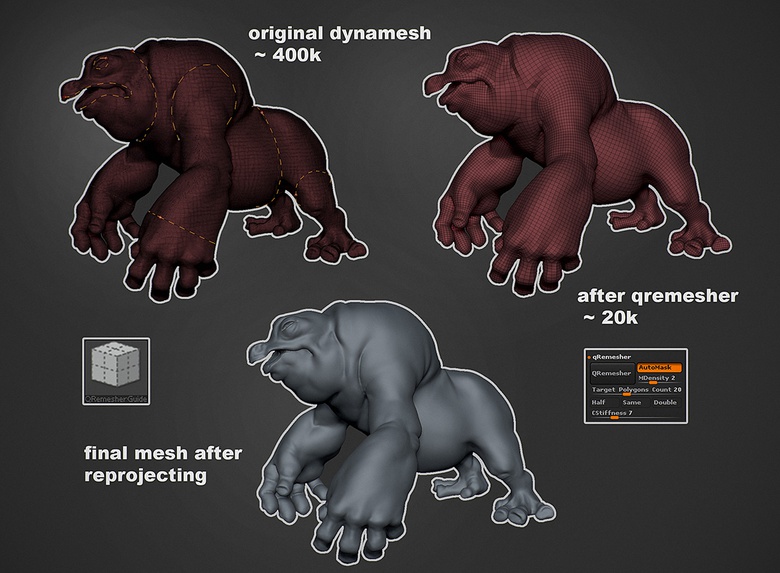 With all the major forms and objects in place, I started posing the model with Transpose Master, which involved masking and moving parts of the mesh with the Transpose tools, with some adjustments with the Move and Move Topological brushes. One thing that makes the posing a lot easier is to have the close polygon density on all the subtools of the model, otherwise the masks get sharper where there are more polygons and softer where there are less (Fig.06). 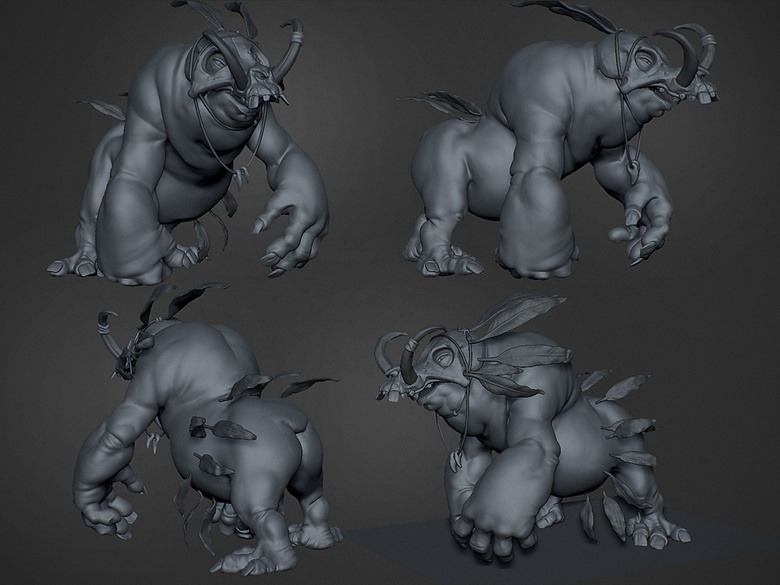 While working on the pose I tried to keep in mind the final view, so that all the important details would be visible as much as possible. When I was finished with the posing, I started breaking up the symmetry, adding all the little elements and also detailing the existing ones. Here I created all the final leaves using the Topology brush, and all the teeth and bones using the plane masking method (Fig.07). 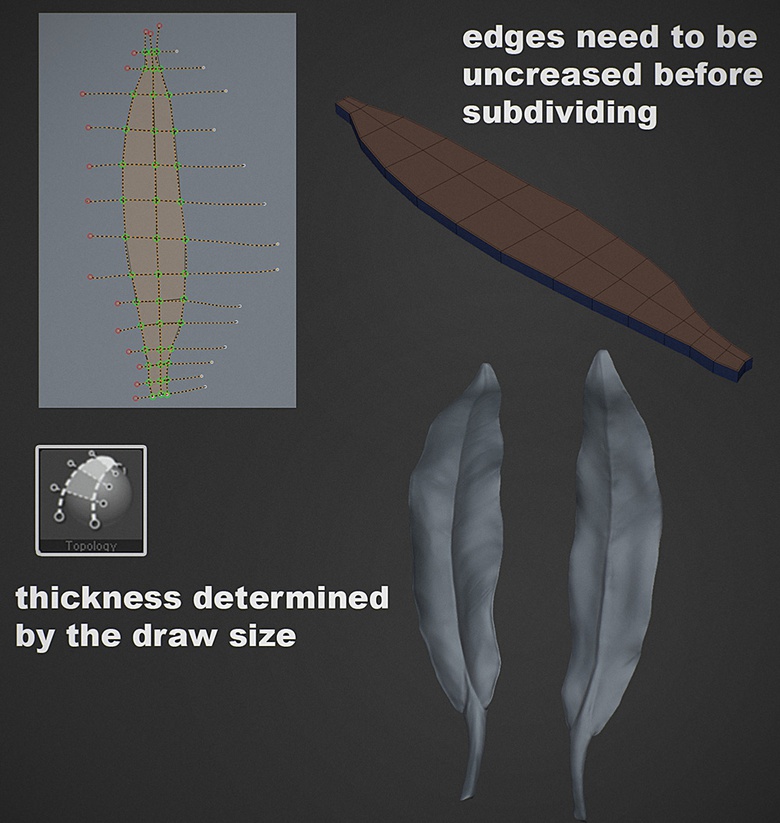 For the robes I used the CurveTubes brush again, and by holding the Shift key when moving away from the surface they snapped to the mesh while also enclosing it. Then I adjusted their thickness by changing my brush size and clicking on the curve.

Working on the fingers, especially those on his arms, was quite difficult because they are so close together. I needed to make a separate polygroup for each of the fingers; Ctrl + clicking on a finger separated it from the others, making it a lot easier to work on. I did this by isolating the fingertip first, because it was easier to select, then I hit Grow in the Visibility tab until the entire finger was visible. I then used Group Visible to group the entire visible part of the mesh and repeated this for the other fingers (Fig.08). 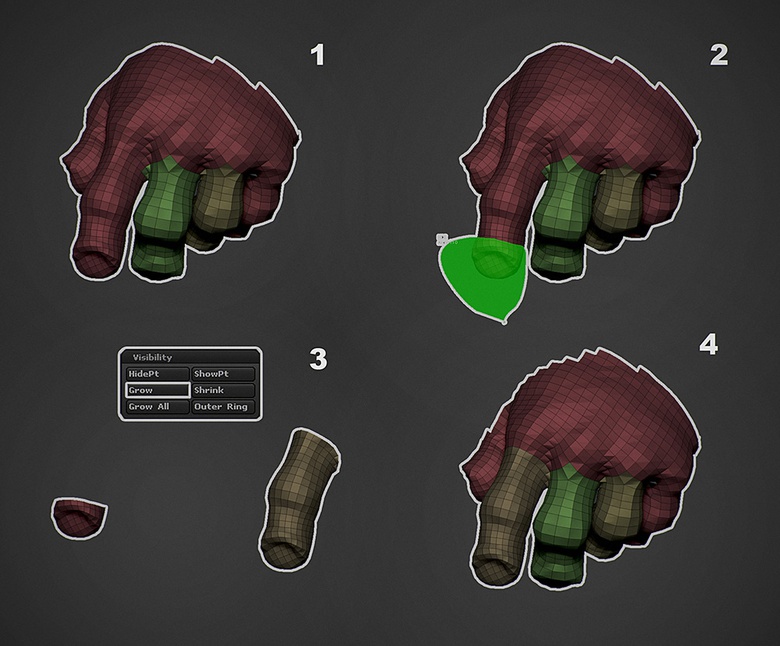 A large area on his shoulders and back appeared to look too bare and boring to me, so using the MaskLasso tool I masked some spots into clusters, and then made these harder details on his back to make it a bit more
interesting (Fig.09). 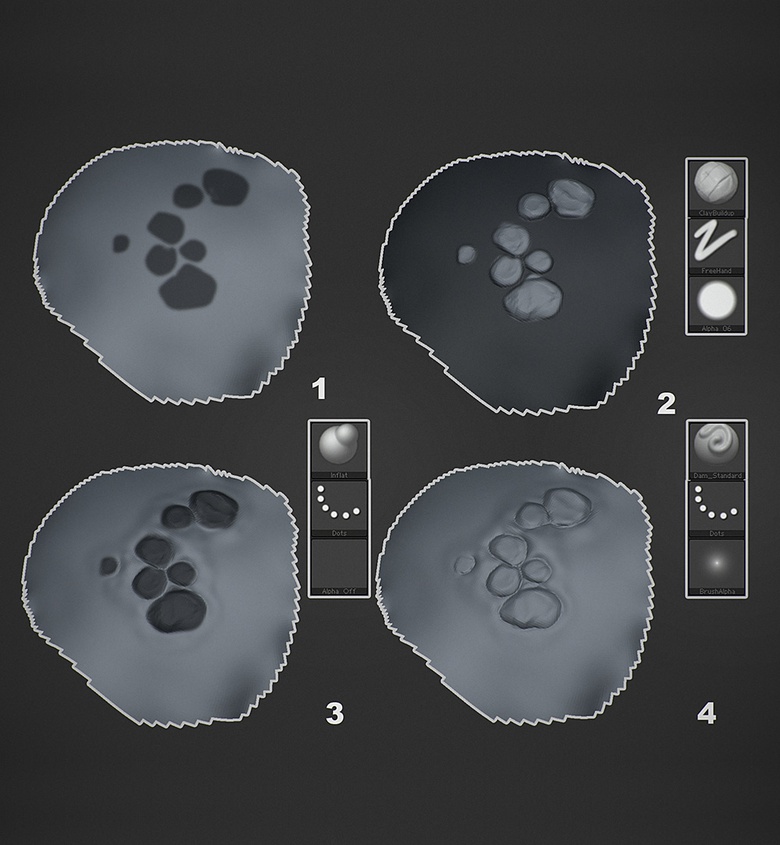 For the beads, I masked thin parts of the robe where I wanted them to be and then, again using the Extract and Edge Loop tools combined with GroupsLoops, I created them one by one (Fig.10). 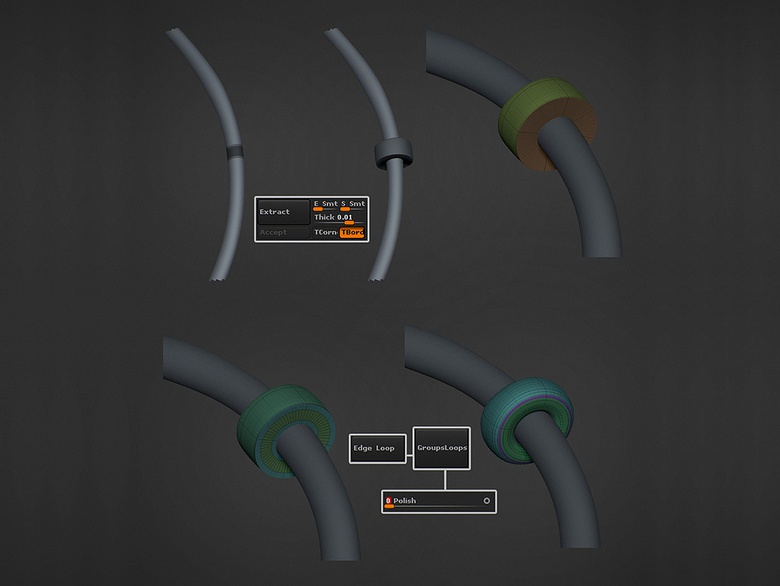 For the finest details I mostly used the Dam_Standard brush in combination with the ClayBuildup and Pinch brushes, with the brush modifier around 40 and alpha 37-38 from the default ZBrush alphas. At this point I was trying not to spend too much time on one area and overdo it, but to keep moving across the model and detail it evenly.

My approach to the texturing is the same as my approach to modeling: moving from the largest to the smallest detail. I first started by rendering the whole model with a white Matcap material and then moved to Photoshop, so I could quickly test different color schemes (Fig.11). 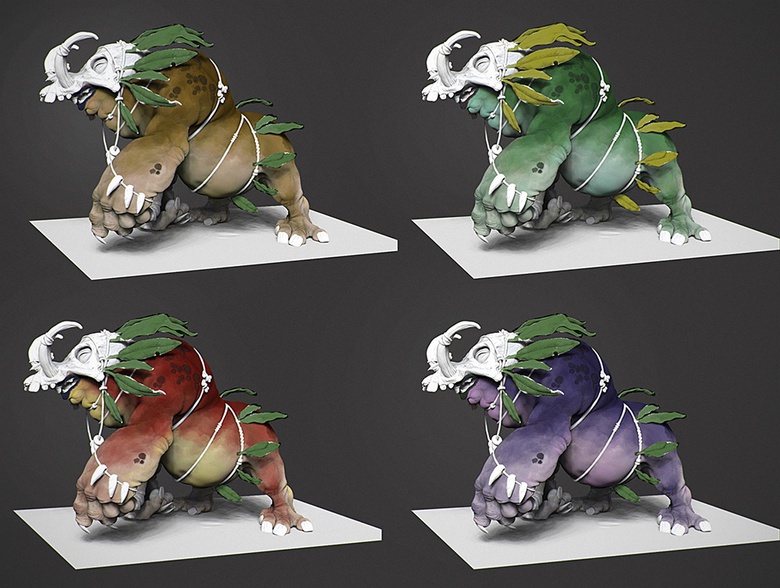 When I was satisfied I moved back to ZBrush, filled every subtool with its base color according to the sketch and from there I started adding color variations and more detail.

At the beginning of the texturing I mostly used a brush with the DragRect stroke and some spray alphas, such as 07 or 08, to create base color variations. I then moved to the smaller detail with a spray stroke, again with these two alphas, and the freehand stroke for the finest details. At the end I dragged in some alphas I'd made from photos to enrich the texture. Mask by Cavity and by PeaksAndValleys are also really powerful tools here. I tried to put some cold and warm areas in the texture and also some gradients to make it look more interesting.

I started the rendering by saving a custom view in the ZAppLink first, so I could be sure that all my passes were from exactly the same view. Then I began rendering the passes, starting with two BPR renders of the textured model. I filled these with the SketchShaded2 material, with a slightly lowered cavity detection; one with Vibrant Shadows and AO turned on, and one with it turned off. I did this because it seemed to have too strong an effect in some areas, so I wanted to mask them out where needed.

Then I switched to a basic material, turned off all of the Polypaint information and picked out black in color. With this setup I started rendering all the extra lighting for the scene by playing with light, color, intensity, placement and the specularity and specular curve of the material (Fig.12). 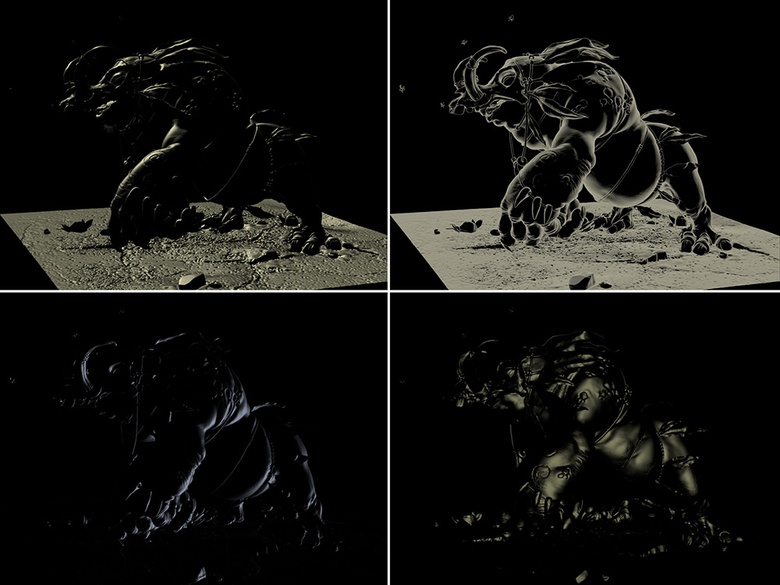 I also made masks by filling all of the subtools with flat color and changing the Inactive Subtool Dimming in the preferences to Minimum.

The compositing of the final render was done in Photoshop. I used my masks to select and color correct each one of the elements of the image, with a Color Balance adjustment layer, to make them look more consistent. Then I added all of the extra light passes above, switched to Linear Dodge blending mode and lowered the opacity where needed. The final touch was painting some subtle effects and adding a bit of a lens blur using the ZDepth pass from BPR. 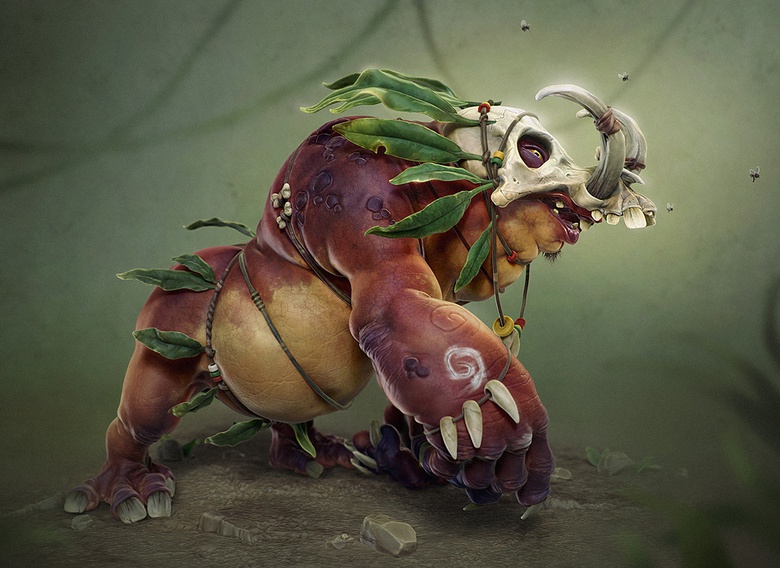