My name is Aidan Gibbons, an Irish 1st year Digital Animation student at University of Hertfordshire, England. The following tutorial is an account of how I created a goblin-like creature (criven) for a course project. The head was modelled in Max but this tutorial applies to almost all 3D applications.

It is in no way the 'correct' way of doing it, just my own method. You should end up with something similar to what i have, which is a very high poly head model. In fact, it is so high poly that you will not even have to use Meshsmooth Iterations! The wireframe picture shown here has no Meshsmooth. I have realised that i have made far to many cuts on the side of the head, so please ignore this. My orginal thoughts were to model the ear from the head, but in the end i modelled the ear separately. I will assume you have a good (intermediate +) knowledge of Poly tools in 3Ds Max for this tutorial. 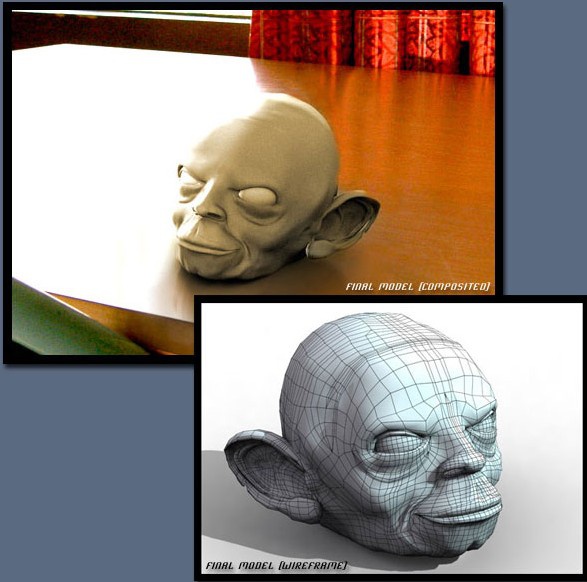 I'm sure it's pretty obvious that Gollum was a huge inspiration for my model. However, I didn't want to just copy him. I used these two pictures (scanned images from the Gollum figure merchandise booklet) to get the general shape of his head. After that, I just went a bit wild. Click here to download the reference setup for the head planes. Use this file as a starting point. 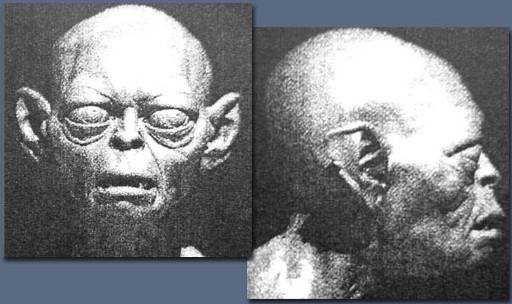 Note: Most of the following shots will not have the reference planes due to the fact that it is easier to see the model without them. 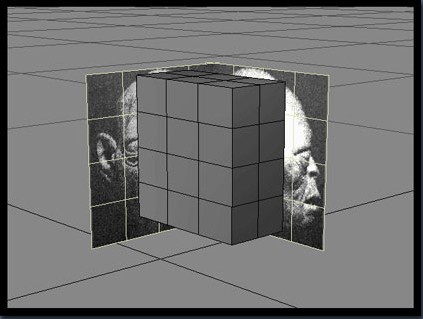 Ok, click here and open 'Reference.max'. There's a cube with the necessary planes and reference. The cube is 4x3x2. First thing to do is convert to editable poly.

Select the back polygons of the cube. Delete these. We will be soon creating a symmetry modifier to model the other side of the head (below).

Ok, now move the cube points around in all viewports to get a very rough outline of the head. The cuts here allow for lips and a lower eyeline. From here on, we will simply be cutting the head to define more form. 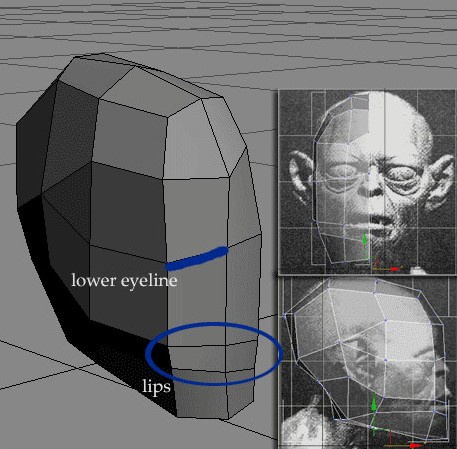 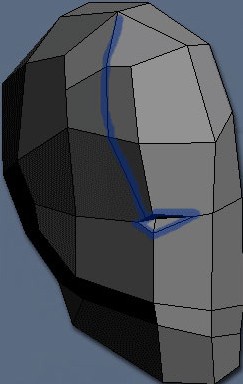 I decided to start defining the eye and areas radiating from the eye. The blue lines indicate where I have cut.

To begin to make the eye more round, cut to the right of the left corner of his eye at radiate upwards. I started to cut more around the back of his head so i could make his head more round. 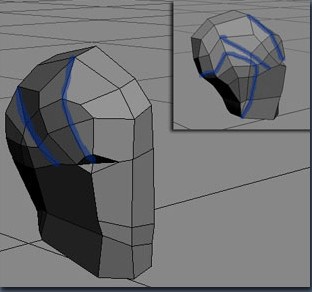 There are no new cuts here. I just altered the shape of his head to fit into the reference images again. I also pulled out two verteces which later will be the starting point for his nose. 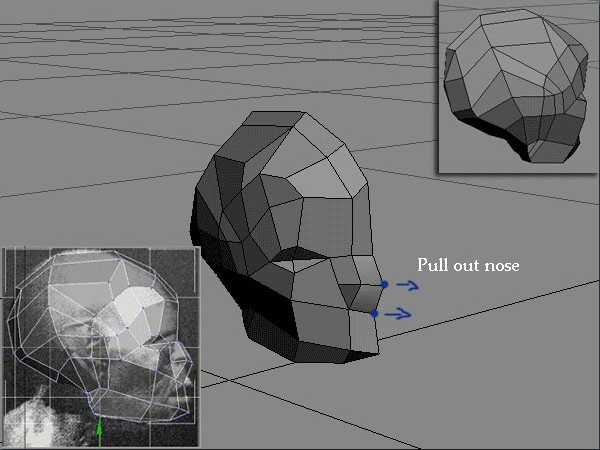 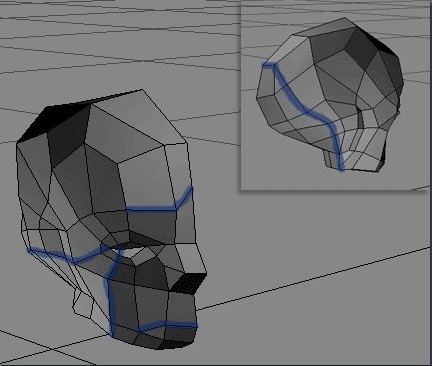 Make some more cuts around the eyes and radiate aout around the head. I also made a cut around the back of the head to define a more sperical shape.

It is around this time that i like to take a look at the head with two sides. It's time set up the head for the Symmetry modifier. Select the higlighted vertices shown below and scale the X axis. This will make sure the points will weld together evenly without seams.

Use the settings I have used to the right to create the other side of his head: 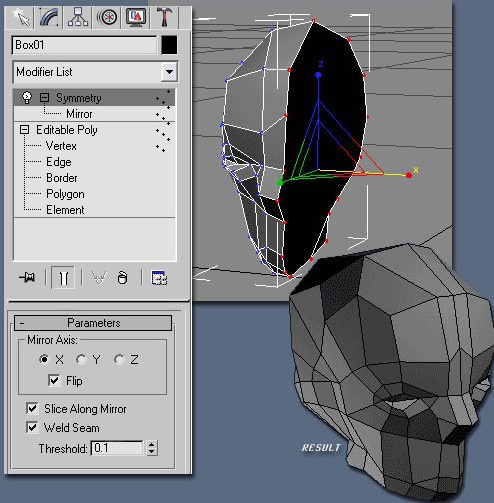 Now i simply looked at the reference planes and reshaped his head, mostly giving him a bigger jaw line. It's quite difficult to get the jaw to look correctworking with only two reference planes. 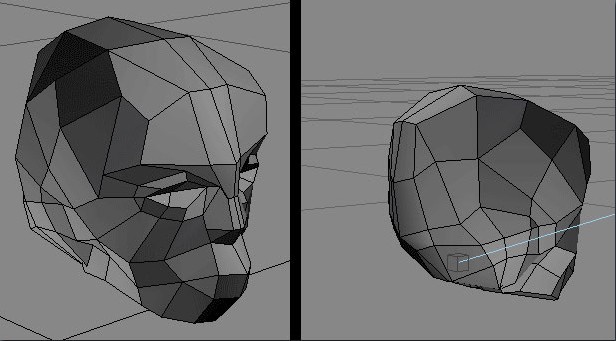 Here I aligned the head up with the ref planes again, paying particular attention to his jawline, eye sockets and mouth areas. 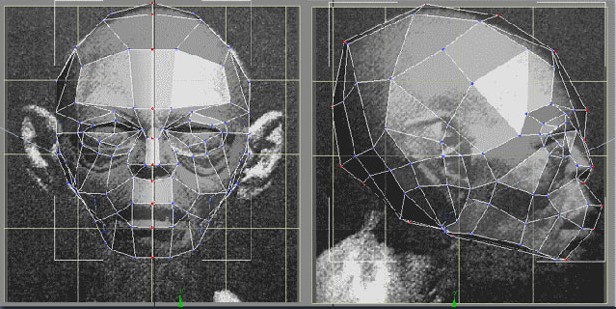 This is quite a large step from the last one, but all i did was cut and move verteces. I've outlined the major cuts. 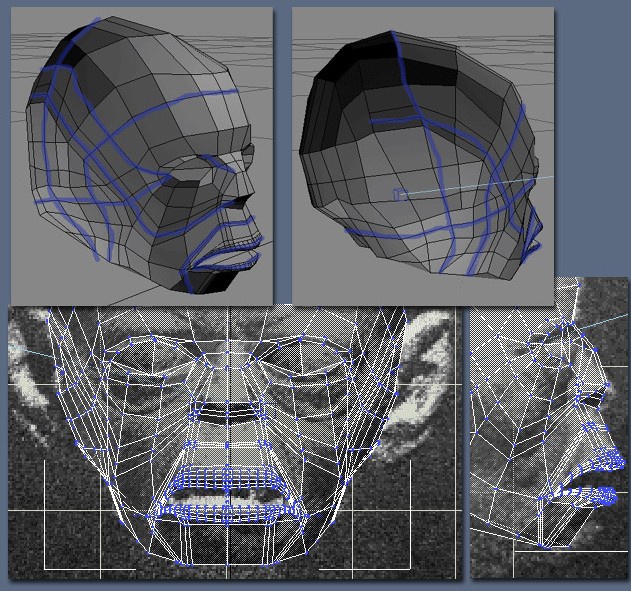 (Above) Looking back, the lips shown here are far too defined for this stage of the model. It's easy to get carried away. You really only need half the amount of cuts i've shown here. 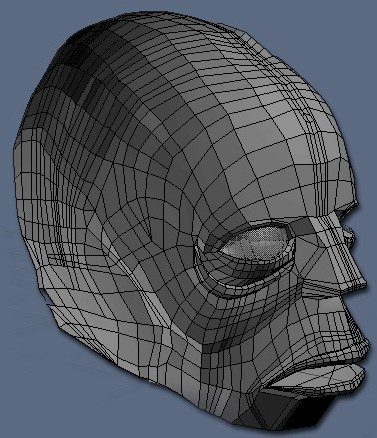 Keep cutting around the polygons for more definition. Here, i concentrated on defining bags under his eyes and his cheekbone.

I added several more cuts around his eyes so that they appear more rounded. I also put in two spheres for eyes and used them to model the contour of the eyelids.

I was really not happy with the way the nose is turning out so i delete it..modelling is all about trial and error. Just keep on cutting around the other existing cuts so you can define the shape better. Think of it as adding more segments to a sphere to get it smoother.

'Poly Flow' is a term i've just created, and refers to the non-linear (smooth) flow of polygons. You can see from this image that the polygons flow from the eye in a circular fashion, right out around the head. Always make sure your polygons flow together nicely.
Â
As you can see, there are far too many cuts on the side of my head. This was meant for preparation of and ear socket. Please ignore, we all make mistakes!

I also deleted the areas above the upper lip, and the entire nose. The reason for this was that the polygons from the cheek were not flowing properly. I starting with a small box and extruding polygons for the nose.

The head is starting to come along nicely now. The nose is now completed and i have modelled some wrinkles and creases. To model the crease on his forehead, simply cut around a row of verteces. Then, select the verteces that you have enclosed, and pull them out a bit using the move tool. I have also put some eyes in so i could model the eyelids and bags under his eyes.

Now we will go on to ear modelling.

Now for the ear. Start with a box, 1x1x1. Extrude around until you get something that looks similar to this 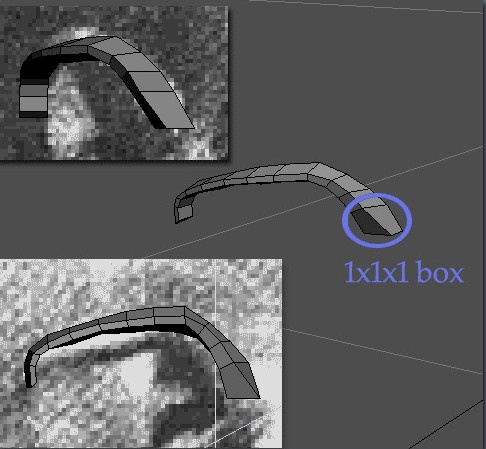 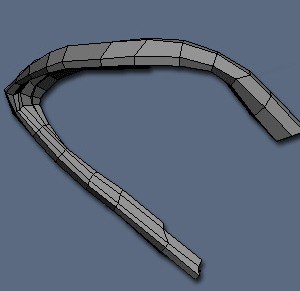 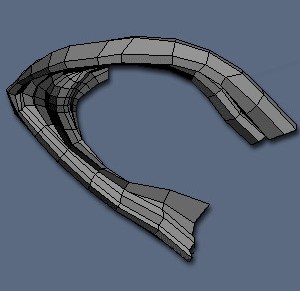 I did not really use the reference images for the remaining part of the ear. I wanted to go a bit wild here. First, continue with the outline of the ear. Then, slowly build inwards. Be conscious of ear creases and bumps. I put as many ear creases in as possible to get a realistic look.

You can see here that i already put in a little mound insed the ear. This, when smoothed, will look really great. 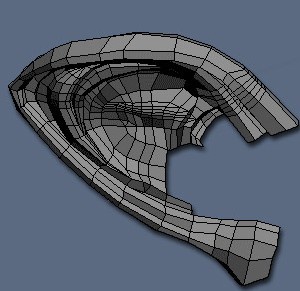 Here is the ear with more bumps and definition.. 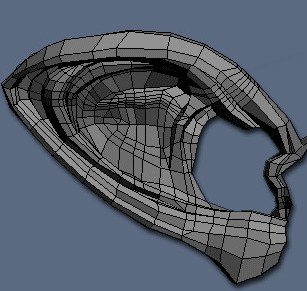 Both ends of the ear joined. Now all i have to do is fill the gap. 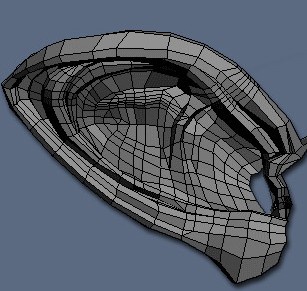 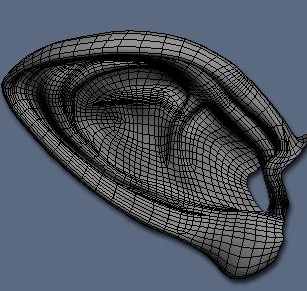 And smooth it to see final result. 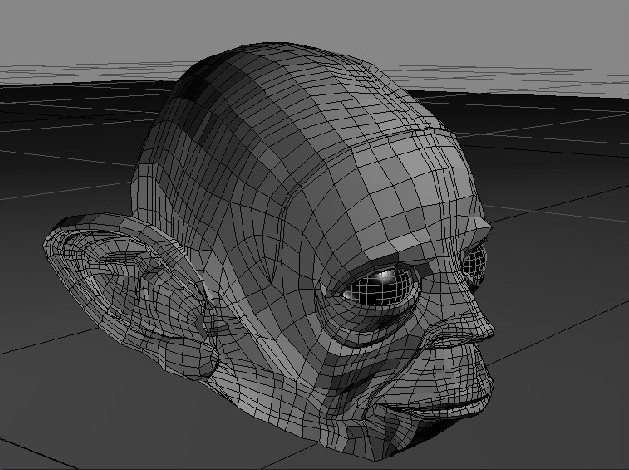 I added some creasing to the ear at this stage, and shaped his chin. This is the cleaning up stage: 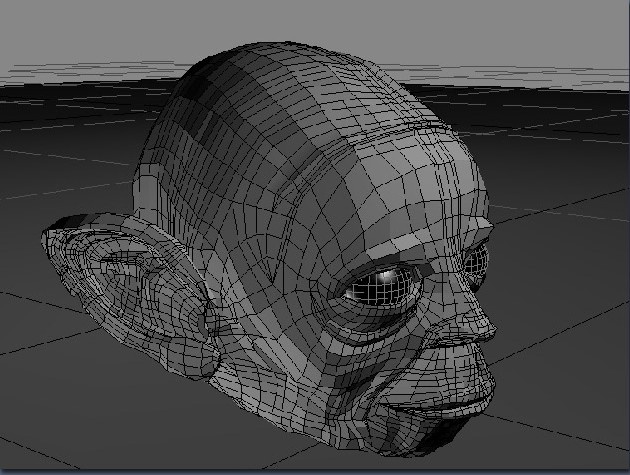 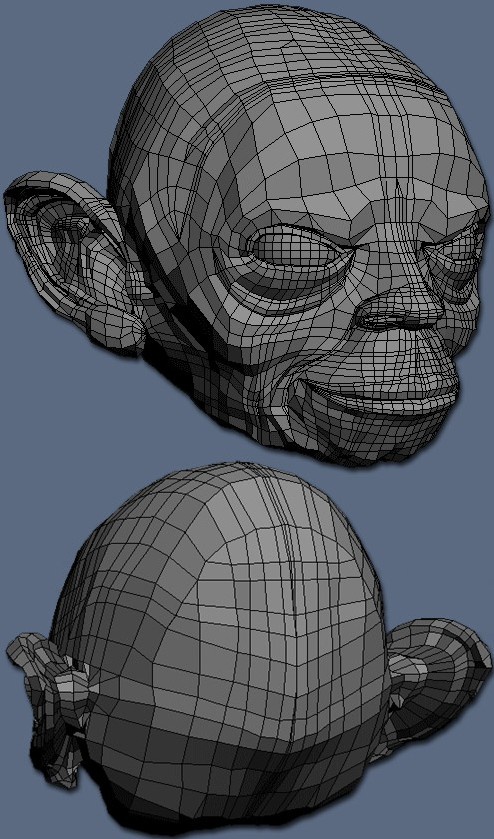 This is the finished version of the head. Apart from texturing of course. In this final stage i have filled in the backs of the ears and attached them (so the head is now solid) and also defined more wrinkles and cuts. I also made his look sinister, by simply lowering his eyebrows.

There are no mesh smoothing on the model, just lots of cuts! To make the model look smooth, like in the two renders at the top, simply turn on MeshSmooth with 0 iterations. This will not split the geometry, only shade the model and make it look smooth. This saves a lot of rendering time and results are great.
Â
I am currently working on texturing the head, and below you can see the UVW Unwrap of the head. I used Texporter for this (a free plugin available from www.cuneytozdas.com).

If you have any questions, comments, tips etc., send them my way! My email address is a.gibbons@herts.ac.uk

Special thanks to Sol and Mark for technical help, and to my family, friends and my girlfriend for ongoing support. I am currently looking for part time work (in UK or Ireland). My website is www.cyblingdesign.com and my portfolio can be seen at www.cyblingdesign.com/portfolio

Also, check out www.3dhit.co.uk to share the knowledge, ask a question or join in on the fun. Thanks and byeeeeee! 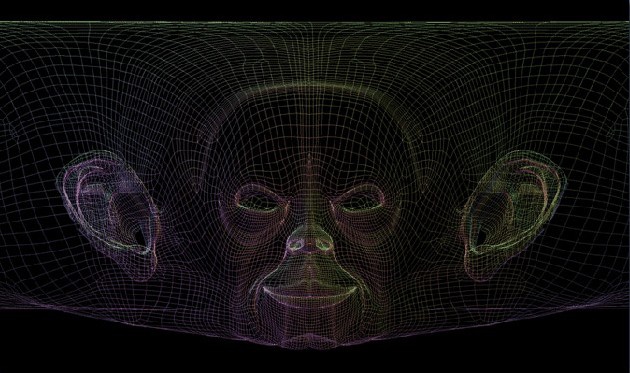