Using only modeling and rendering techniques, we shall create an accurately lit anime/Manga-styled model that will showcase accurate lighting from all angles without using any textures to create fake representations of such lighting events. This means that the result will be a completely universal anime head project for animation or rendering images that can be used for great CG anime purposes, or even translated to game engines like Unreal Engine or Unity.

Defining the proper head-shape and topology

Since we are dealing with a mesh that's going to serve a primarily illusionary purpose, it's key to define the proper base, outlining the points that are going to act as a cornerstone for the entire head shape. These lines are the most important edge loops in the mesh which you should focus on, as they will define the perceived angles while rotating the camera. Having a toon shader with only 2 color layers, you will be working to create the proper illusion of shape and form, which particularly matches the animated Japanese art style. Before you head into the modeling (pun not intended) take note of these key points, and plan out how you are going to incorporate your topology to properly accommodate for these points.

As you move on to the modeling, I suggest starting with the eyes as the primary topological point from which the topology will originate, simply because it starts from an open edge that expands like a spider web throughout the mesh.

As for the actual eyes, as instructed in step 1, the two key edge loops are the actual eye shape, and the shape of the eyelids, which must correctly overshadow the eyes in order to get that thin eyelid outline as per more realistic anime like Sasuke from the Naruto franchise. If you are modeling a less realistic character, you can be free to interpret the instruction as you will, and adapt to the result you are going for.

Moving on from the eyes, the next most logical point to expand to is the nose. Make sure that the nose shape is rigid and perfectly flat in topological orientation and formed as a curved triangle or shall I say pyramid.

The bottom of the nose should be flat and isolated so you can attach a shaded color layer, but more on the shaders will be talked about later in the article. It's also very important to have the proper amount of edge loops to make the corner of the nose rigid enough.

If you are working to adapt this to a game model mesh, you can alternatively configure the topology. How I would advise to do this is to actually Turbosmooth the mesh and then remove extra loops, or if you are going for a really low-poly version, then I guess just have the corner defined, but this whole guide isn't intended for the lowest of the lowest of meshes.

As the nose shape is complete, extend the lower end into the mouth area and define the correct mouth shapes illustrated in the image. Mostly having a flat surface for this type of character and enough edge loops to have that sharp corner defined from the angle like in popular realistic anime.

Again, it goes without saying that you can use your own judgement to address the proper look you're trying to achieve while using the same principled outlined. This same model can be adapted to any type of cartoon, even non-Japanese, which is something I have done.

Following on, you can complete the remaining facial structure while keeping in mind the instructions laid out in the previous steps. You should pay close attention to the cheek line and adhere the rest of the topology to it. The ear is a regular ear that has to have a clean and perfected shape, while also having certain edge loops as per the illustration, so you can use them for defining a textureless shade as you are going to follow the instructions laid in this tutorial. 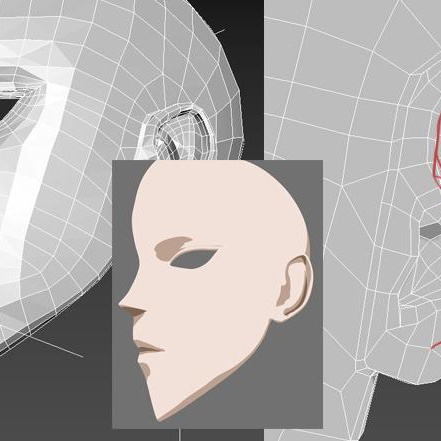 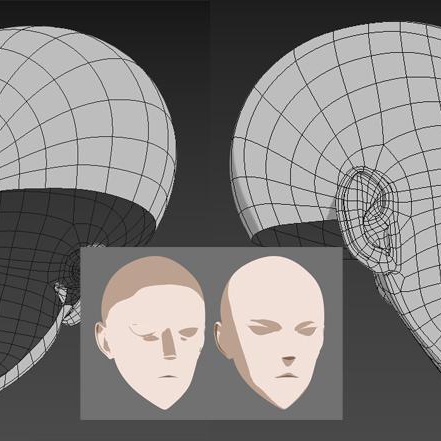 Moving on to the eye structure, the crucial part of the mesh is the inward mesh of the eye that will capture the shadows that occur while lighting the eyes from different angles. Having a hollowed out eye will create shadows that are likely to occur in anime that aren't entirely based on reality, but are enhanced for aesthetic appeal.

Having eyes hollowed out like this, and done so upwards like the extension in the illustration, will leave room for the eye cone to move around in the eye and also receive proper shadows, and also create a highlight at the bottom if you use a third layer of shade for the eyes like I did.

As for the eye cones themselves, the technique described here is key to having the eyes render proper lighting from all angles while looking amazing, without any additional textures.

As described in the image, the eye 'cone' consists of 4 spheres that are of mixed normal orientation. Going from the most outer layer to the most inner layer:

Keep in mind that the whole eye “cone” shouldn't cast any shadows, you can disable this in the properties of the mesh or depending on which software you use. Also, the inverted meshes should not render double-sided or that defeats the purpose of having inverted normals.

Lastly the sphere is flattened and placed within the eye socket at an angle to look great when rendered from all sides.

The last layer that belongs to the eye is the outer eye layer. Opposite of the inner eye layer, this one extends outwards and serves the purpose of adding additional specular reflections to the eye while creating depth.

It’s pretty self-explanatory given the images and the purpose. Just have it bulge out to create angular reflections above the eye. Also, it shouldn't cast any shadows.

You can model the eyelashes and eyebrows in a stylized manner of your choice. Particularly in the case of this article and guide, the meshes were taken from the original topology of the head and extracted as a spline, which was then extended into the shape and modified to look more stylistically appealing.

This part requires some aesthetic decision making and if you have a keen eye for anime character design you can create your own defining style.

As per the shaders themselves, a standard toon shader is used of any kind, or any software is welcome. It's just a 2 shade cell shader, with the proper colors defined for each area. It's key to have aesthetic appeal here and to draw proper guidance from your referenced anime, or create your own style.

The hair isn't something that I'd like to mention as particularly it isn't related to this guide, but is a standard mesh extracted from a spline and modified, and then copied and modified further. You can do this in various ways depending on the art style. Now, as you place lights into the scene, this mesh will render like hand-drawn anime from all almost any angle, and with proper animation you can create your own CG anime easily.

It's key to think of the angles you are going to be dealing with in terms of lighting and camera. This model is always going to serve as an illusion, so carefully crafting the mesh from all angles will only give you the proper result.