In this tutorial I will show you my work flow for creating a twin tip exhaust pipe like the one in Fig.01.

I will be using 3DS Max 2010 but you should be able to follow in pretty much any other 3D software. We are going to start from the tip and work our way across the muffler. First off we will need the front viewport and we want to draw a circle spline and give it a suitable radius and number of sides. I gave mine 12 sides as I am going to use 2 iterations of turbosmooth later and I want it to be smooth. (You can use as many or as little as you want).

Move one circle to the left and clone it to the right so that you can see how the twin tips will look (Fig.02). 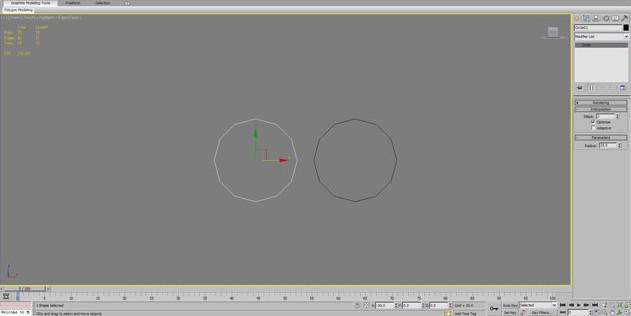 Create another circle with twice as many sides as the ones before (you will see why in a minute) and then squash it a bit so it looked like a muffler. These circles are going to be our blueprints for our exhaust (Fig.03).

Next we want to create a tube with the same amount of sides as the smaller circle and position it in the same place (Fig.04).

Convert it into an editable poly and then delete the back edges so that you are left with a flat circle of polygons. Make sure they are in the same place as the circles (Fig.05).

Next we want to set Max up so that it will snap to the vertexs. So across the top of the command panel right click the Snaps Toggle button, which looks like this (Fig.06).

We then want to make sure that only Vertex is selected. Once you have done that make sure that the Snaps Toggle button is on and then we can start some editing. What we want to do is go around moving the outer vertexes towards the larger circle until they snap to the position, as seen in Fig.07. 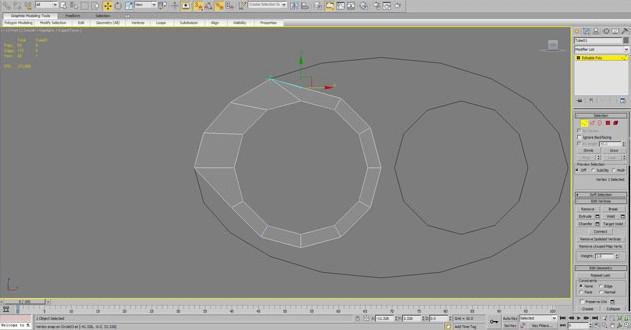 
Keep going around until it looks like Fig.08. Then you can turn Snaps Toggle off. 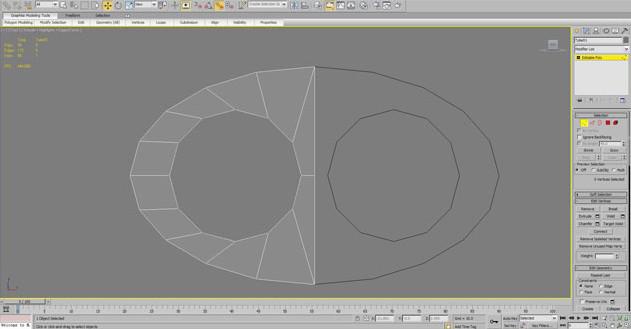 If you want, you can now add a symmetry modifier. Next it is on to the tips; ring-select the inner circle and Shift+drag it to extrude it (Fig.09). 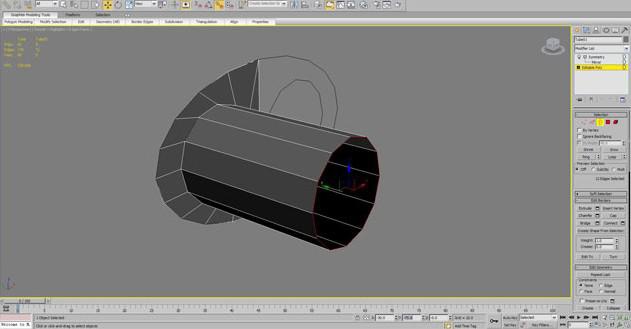 In the left hand viewport give the tip some vertical cuts and then rotate the last loop to your desired angle. You might have to scale it once you have finished to ensure that it stays the same size (Fig.10). 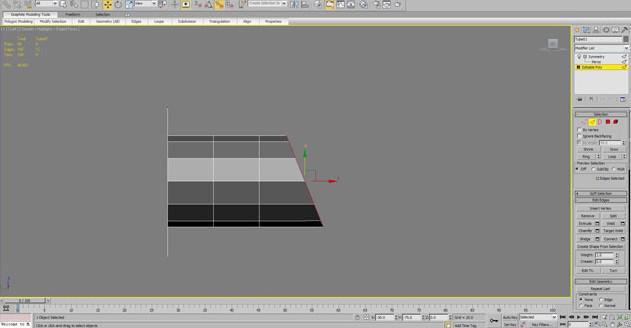 Shift+drag your edge loops to any desired height. And give some cuts to keep the meshflow decent (Fig.11). 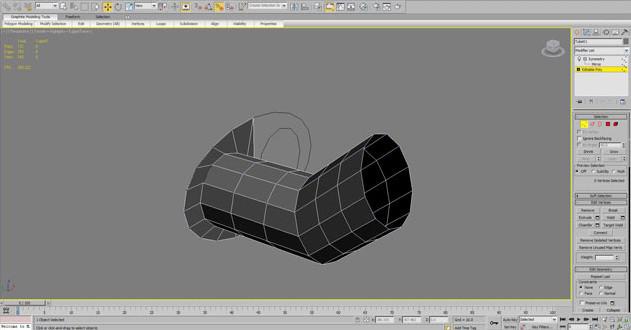 Next we will do a little bit of work using the muffler so select the outer loop of the muffler, making sure not to select the middle edges, and shift and drag to set it somewhere (note my "Y" position - yours does not need to be the same as mine but you will need to know what the coordinates are) (Fig.12). 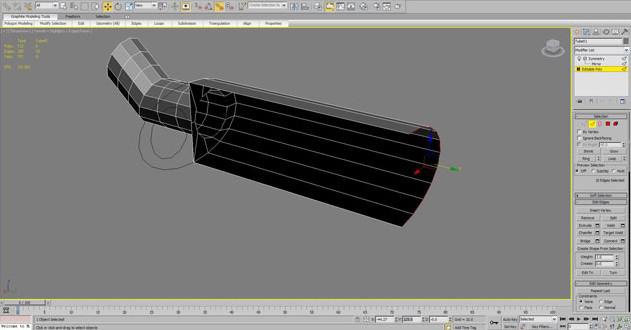 Create another circle using the splines and set it at the same location of that last edge loop you created. In my case it is 225. Make sure it has the same amount of edges as your muffler as we are going to be using the Snap function again, like we did earlier. Select the muffler edge loop and using the Scale function, shift-drag to extrude the edge (Fig.13). 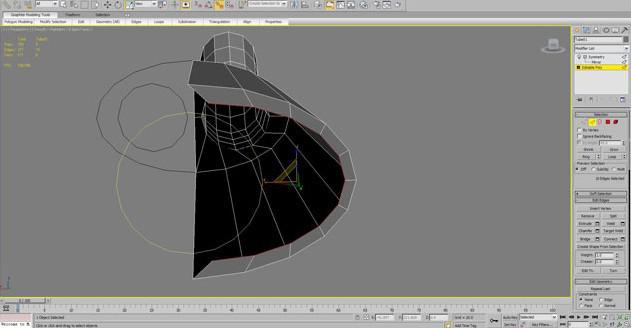 Activate the Snaps Toggle again and snap all the vertexes to the circle spline, as shown in Fig.14. 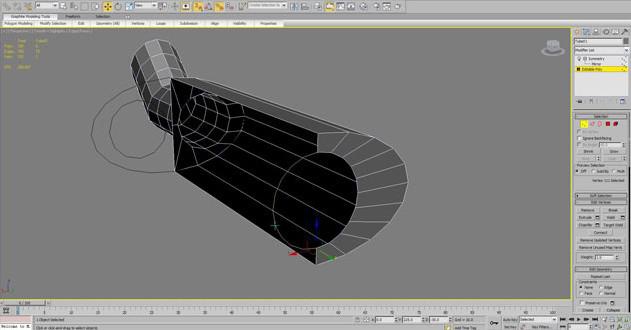 Shift+drag the new edge loop out as far as you want - we will come back to that part later. Next we are going to define the tips a little more.

Loop select this edge and scale it so that it gives the join a little more definition (Fig.15) 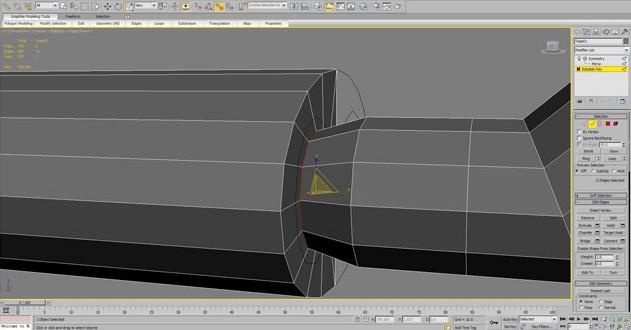 Then you want to chamfer these edges, as seen in Fig.16. 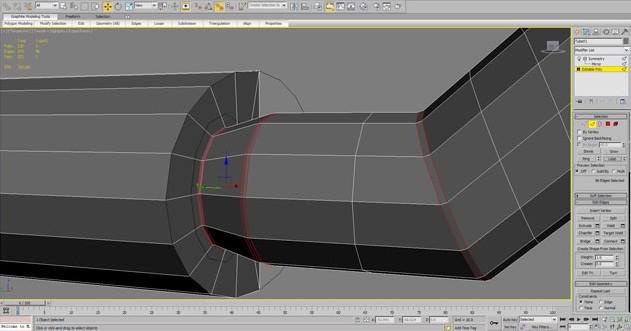 Let's give the inside of the tip a little bit of detail. Select the end edge loop and use the extrude function with something like the settings shown in Fig.17. 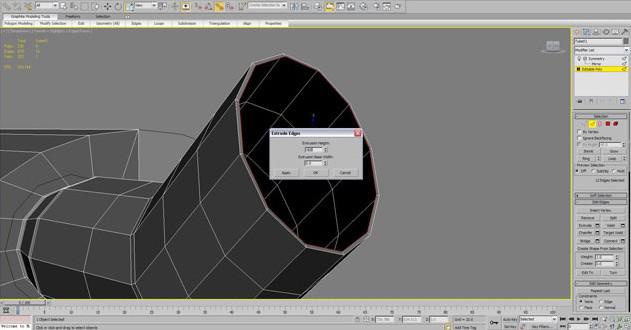 Then go into the left hand viewport again and press F3 to toggle it to wireframe, then Shift+drag that edge (Fig.18). 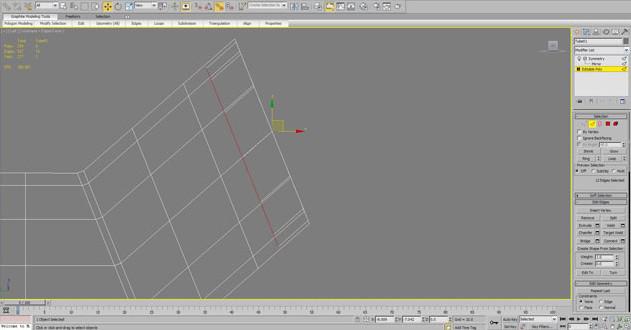 You can make it look however you want. I made mine look like this using a few Shift+drags, as well as the Scale function. I then chamfered a few edges to add some definition to it (Fig.19).

Now we are going to detail the rest of the muffler. So collapse the symmetry modifier by right clicking and converting to editable poly. Then we need some more sub-divisions down the length of the muffler so make those cuts (Fig.20). 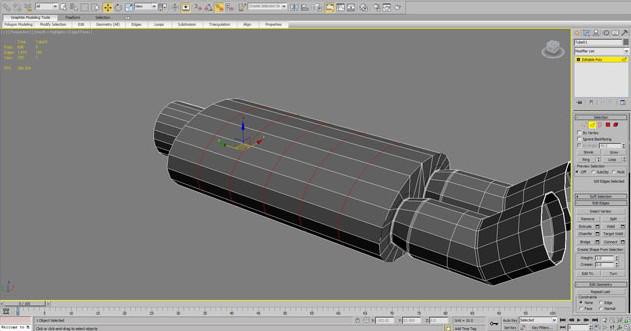 Select the end loop of the muffler, as shown in Fig.21. 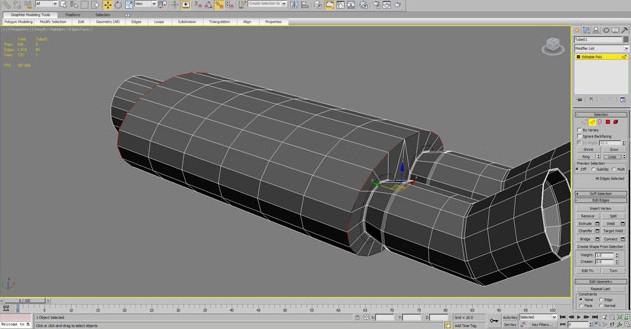 We are now going chamfer these edges with two segments. Once you have done that you might have spotted an error like the one shown in Fig.22, but that's not a problem as I will show you how to get rid of it. 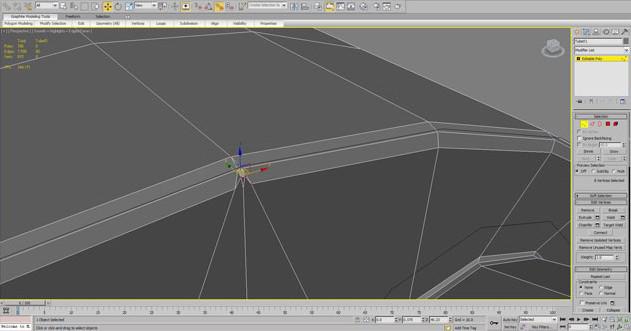 Select the top two vertexes as shown and the click collapse (Fig.23) 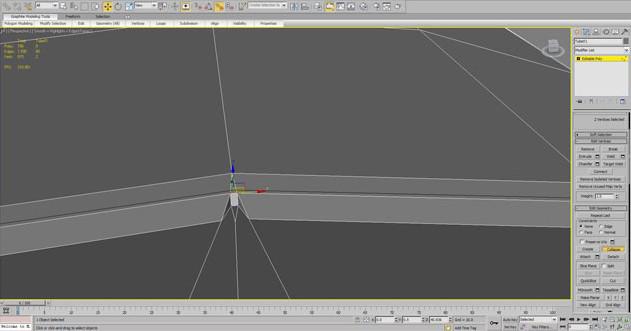 Then we want to use Target Weld for the other. So right click and the select Target Weld and then click Vertex 1 and then 2, as shown in Fig.24. 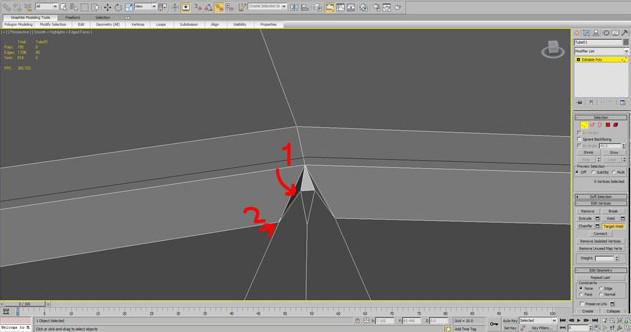 Repeat this on the other side and then weld them to the remaining one in the middle. The end result will look like this (Fig.25 - Fig.25a). 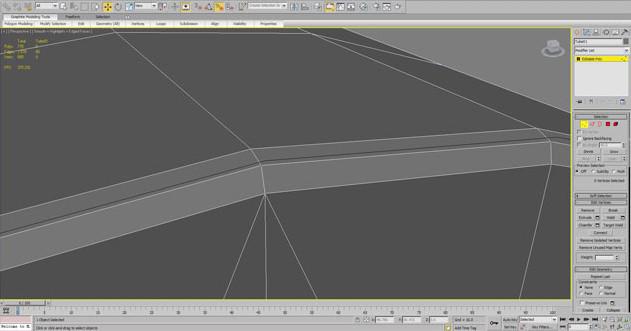 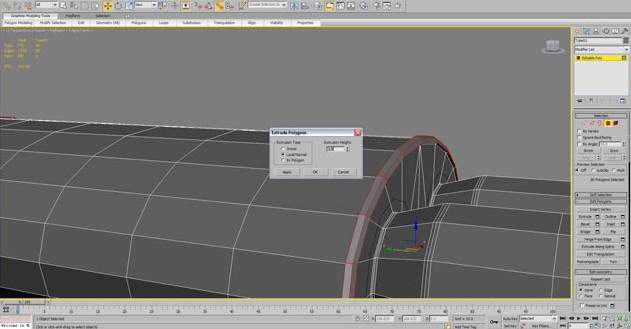 Don't forget that this will have happened on the underside as well, so repeat the steps above to correct too. Now to create the seams on the muffler select the newly created polygons and extrude them (Fig.26). 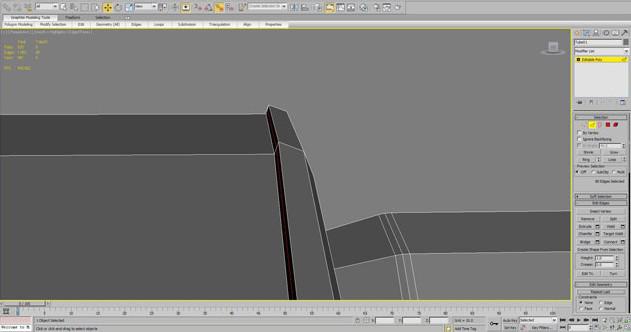 Make some new cuts to define the edges - I used Ring - and then connect to get the edge shown in Fig.27. Be sure to chamfer the other end of the exhaust as well.

Make any additional cuts, if needed. Once done, add a turbosmooth modifier and two iterations and stand back and admire your hard work (Fig.27). Give yourself a pat on the back!

Thanks for reading this tutorial - I hope you enjoyed it.