Hey there! My name is Phil and I'm a 3D Environment Artist currently working at Turtle Rock Studios in Orange County, CA. In this tutorial we'll be going over the creation process of my latest environment, Hell Scene. We'll be going over topics such as level block-out, lighting, sculpting, and set dressing. 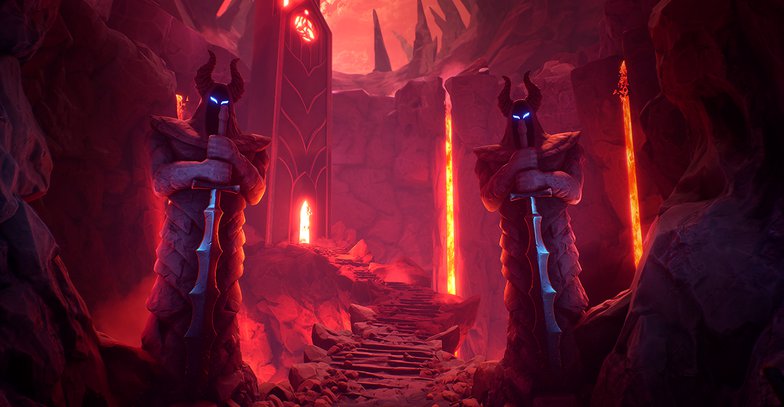 Once I have a concept that I want to work from, the first thing I like to do is set up a mood board. Even though I'll be working off one concept, I find it useful to have several other references up that have interesting and dramatic lighting. It definitely helps influence how I want to light my scene to enhance the narrative. I also like to choose a few references of assets that have the same visual language that I am trying to achieve. 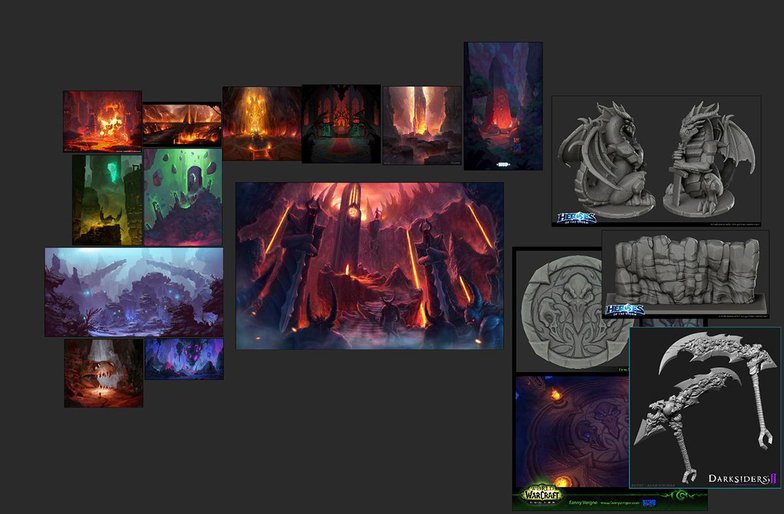 Planning out the environment

Starting a new environment can always be intimidating, but if you can break it down into manageable parts, you'll find that it's simpler than you think. So, before blocking out the environment I like to create a list of props, textures, VFX, and so on. I'll also start to decide where I want my viewers to be looking and where the camera will be (I do this a lot more during the blockout phase). This will help me determine what needs to be built as well. You don't want to spend time making something that no-one will ever see! 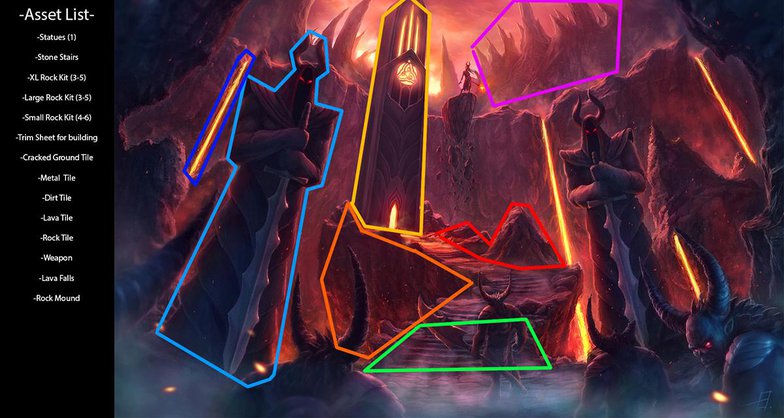 Blocking out the environment

Perhaps one of the most important steps in creating any environment is the blockout phase. I tend to spend a lot of time on this step because it's going to drive the rest of the environment. Things I'm paying attention to are scale, composition, and to some degree, shape language. Blockouts can be as rough as you want. You can see that my statue blockouts are just cubes. It all depends on what you're comfortable with. Also, it's important to play in the level and walk around to get a good sense of space, scale, and proportions. 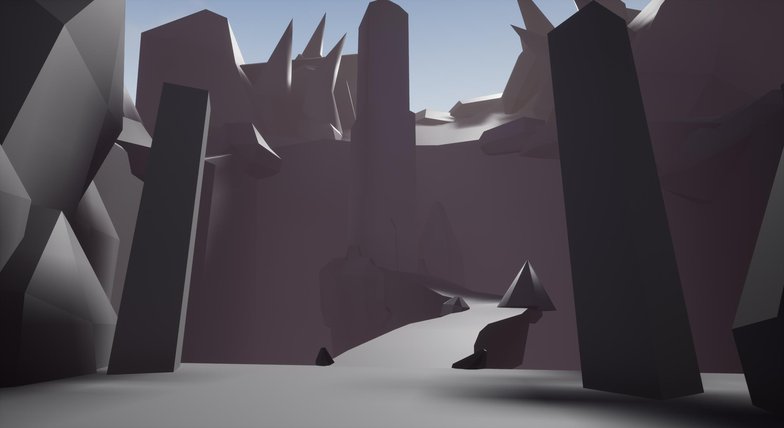 Creating the statue: part one

I wanted to make sure and create the statue first because it's going to be one of, if not the most important features in the environment. Also I knew that I would want the camera to get close up. Or if this level was in a production setting; I'd want the players to get up close to this object. I started out blocking the bottom half of the statue in Maya as well as the sword. For the body, I used the human base mesh in ZBrush and used the transpose tools to place his arms in the desired location. 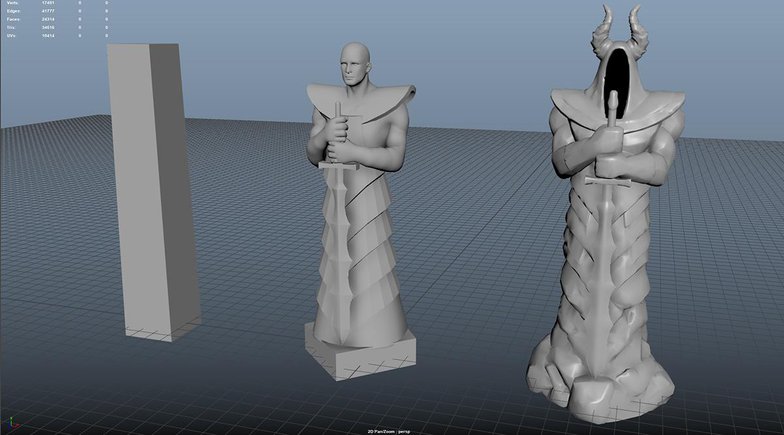 Progression shot of statue from blockout to the finished low-poly

I'll take my proxy that I made in Maya and bring that into ZBrush. I like to use DynaMesh to start merging the appropriate SubTools together like the base and bottom half of the statue. Once I get a nice base resolution to work with I keep it at that number and eventually will begin to subdivide the mesh. Since I wanted the statue to look like it was carved from a single rock, and so I was able to get a nice transition from rock to a more refined stone look by using this process. I really try to pay attention to silhouette during the entire sculpting phase. Since it's stylized I want to exaggerate the forms even more. 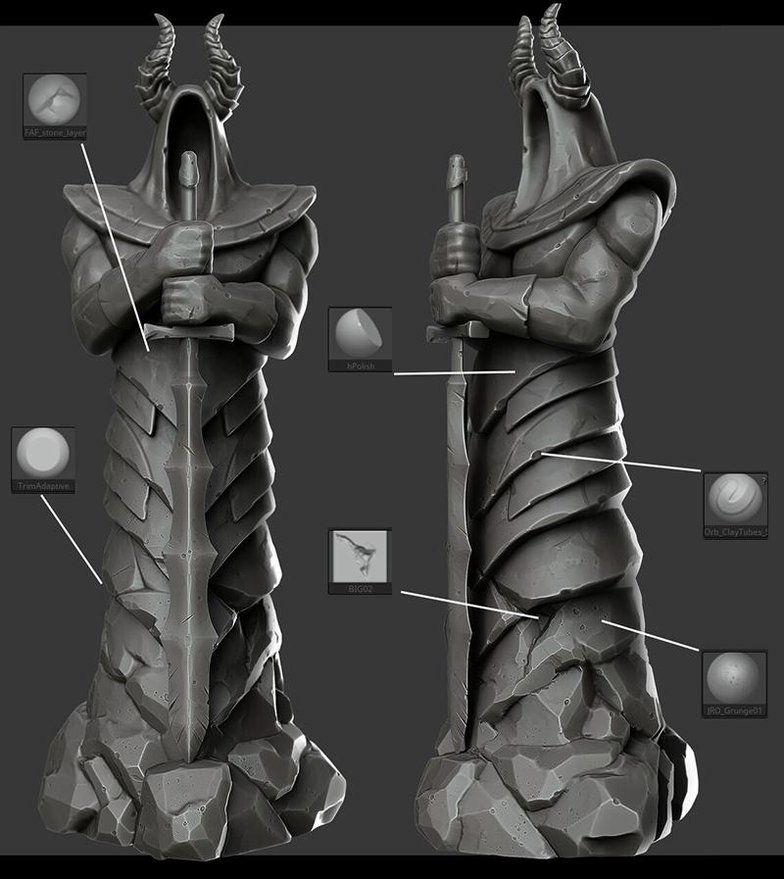 Something I noticed as I was planning my scene out was that it's basically made of mostly rock and stone. Which was great for the low-poly creation. I will usually always use decimation master in ZBrush to get my low-poly model. It's very fast and quite efficient; especially for rocks. Depending on your budget, most engines will be able to handle more tris. The tri count of the stone stairs was 4,276. For all the smaller props I used Substance Painter for texturing. Since the environment is stylized, my textures could be simplified.

For larger assets I used a common technique in Unreal where you use a unique normal map for the object and then you pan tile textures through it. That way you are able to get the resolution back and correct texel density. 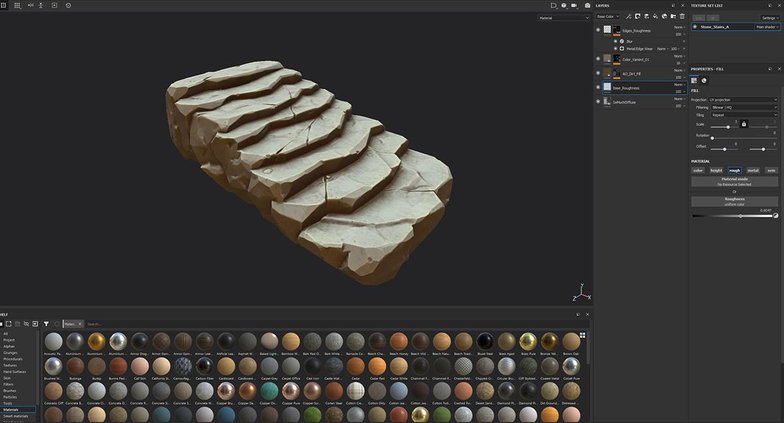 Texturing the stairs in Substance Painter

Though this scene was relatively small, it still required some thought in terms of how I wanted to dress it. If you notice in the concept, there's really only major features, such as the rocks, tower, and statue. So I needed to brainstorm out a few smaller assets to give the scene more life/scale to ground everything else. An easy solution was to add bones along the sides and a few weapons. This helped to further the idea that this place was dangerous. It's good to think about player movement and not place things where the main path is. 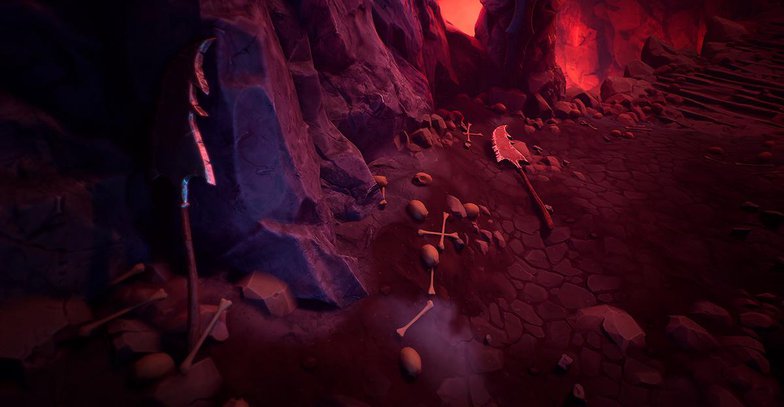 Dressing the scene in Unreal

One of my favorite topics is lighting. So I'll be breaking it into two parts. One of the reasons I chose this particular concept was because I liked the way the artist "lit" the scene. There's nice dark tones of purples and blues in the foreground and it transitions into bright and rich reds, oranges, and magenta tones as you get closer to the background. There's also a nice under-lighting illuminating the center stone pathway from what I assumed was lava. You'll notice in the image that I color picked swatches from a render and did a simple gradient to show the transition of color.

I find it very useful to study whatever image you are working from; and it doesn't have to be a concept. It could be from a photo as well. It's also very important to know where your light source(s) are coming from and which lights are going to cast shadows.

In this scene I did not give myself a budget for how many or what types of lights I'd be using. So in a production setting, this wouldn't be very optimized. However, the goal was to create a stylized lighting effect; so if I needed to add several lights to achieve the look I wanted, I'd add them. For this level I had a main directional light that was aimed at the camera. I also enjoy back-lit scenes. The majority of lights that I used were point lights. Unless I needed to cover a larger area or add a nice rim light affect, I'd use spotlights.

The post-processing in Unreal is also a fantastic way to change the overall feel and look of the scene. One thing I've noticed and am still trying to get better at, is to not play around with post until the end. It can start to get busy and complicated when you're trying to light a scene, and dress it.

For all of my renders I like to bring them into Photoshop and do some last minute adjustments to really make the renders pop. Since this is a stylized environment, I wanted to push the colors as far as I could without it being too much in your face. The standard things I do in Photoshop are a Levels adjustment to make the darks and lights more balanced. If I do a Hue/Saturation adjustment it's very subtle because I like the lighting in Unreal to speak for itself. If I'm finding myself doing many color grading tweaks then I know I should go back to Unreal to make those changes. Lastly I like to do a Smart Sharpen. That will make your renders really feel crisp and sharp. It's important not to overdo it though. 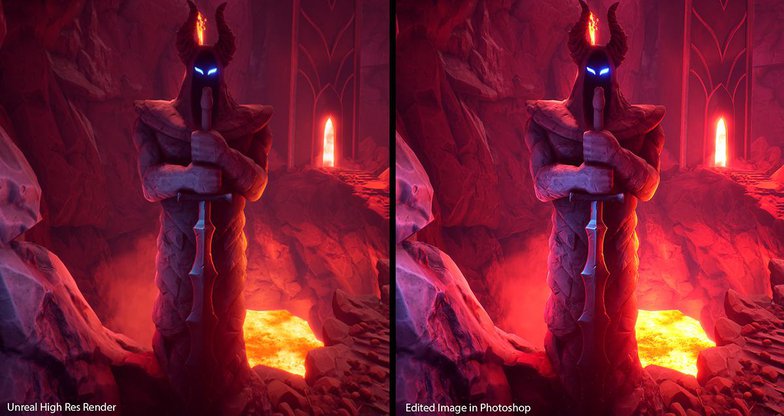