Creating a stylized character with ZBrush, Maya, and Marvelous Designer

In this tutorial, I will show you how I created my latest image “Michi,” based on the concept by the amazing Laia Lopez. I will share the process I followed from modeling (ZBrush, Maya) to the final render (Arnold) and some of the tips and tricks I use for stylized costume creation in Marvelous Designer.

Before I start the project, I like to analyze the concept and sketch on top to understand better the proportions and volumes. This was essential to understand the hair because it was changing in every drawing so it helped me identify the main shapes that would help me later in the block-out phase. 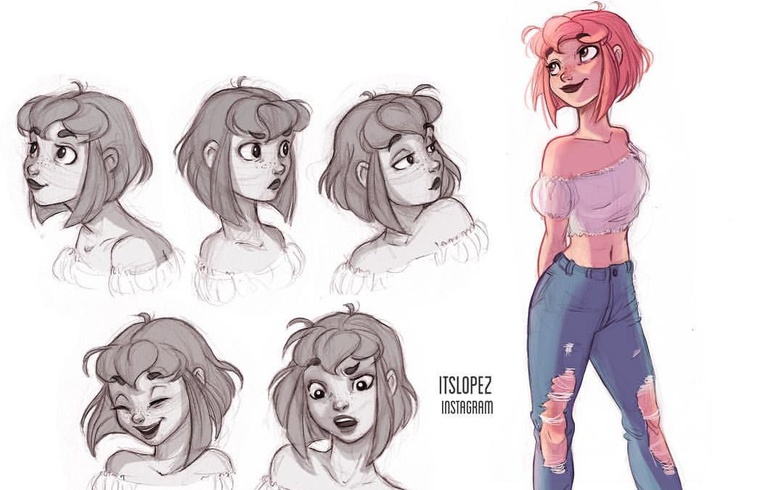 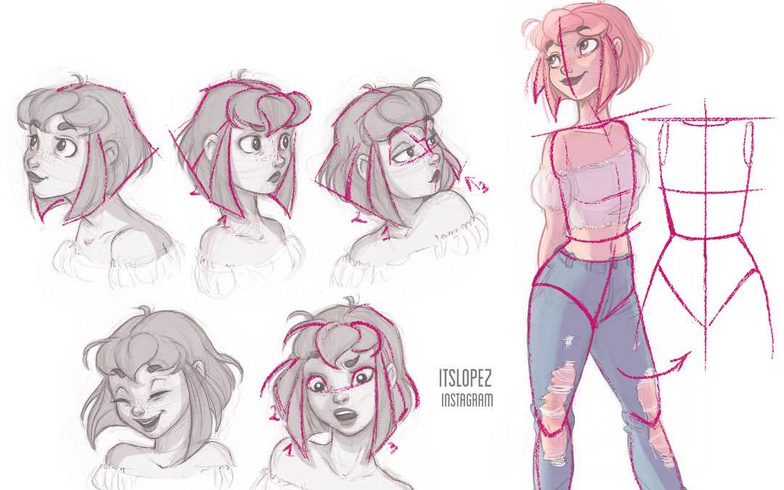 Initial explorations on top of the concept

Analyzing the concept also makes you realize what parts of the character will need additional references. In this case, there was no information about the position of the hands or how the back of the hair would be.

So usually, I spend hours looking for the right references before I start sculpting. It’s also very important to find the right patterns for the clothing (to use them later in Marvelous Designer). I always use Pureref to organize my references and I like to classify them into groups.

Usually, I start from a base mesh but for this model, I began from a sphere and blocked out the character from it (which gave me the chance to explore shapes more freely).

I kept most of the parts as separate pieces at the beginning to allow pushing and pulling things around to get different variations without worrying about the topology. I always check the silhouette window in ZBrush and make sure it reads well from all angles.

Once I was happy with the overall, I dynameshed the parts together and worked on the anatomy. Then, I added some basic topology in Maya and went back to ZBrush to polish the details. I didn’t work a lot on the feet since they wouldn’t be seen with the shoes.

Working on the face

Getting a nice appeal on the face is a key part of a character. I worked on many versions of the face until I found the good direction that kept the essence of the concept while mixed with the stylization I wanted to achieve. While I sculpt faces, I keep thinking a lot about the personality of the character and that defines the type of shapes I use.

Following the same workflow that I applied for the rest of the body, I used Dynamesh until I was happy with the overall direction and after I added the topology in Maya with QuadDraw and continued refining from here. It is much easier to define volumes with a nice and clean topology behind. Then I connected the head with the body. At this stage, I usually start adding some colors in ZBrush because it helps me to see a better approximation of how the character will look like.

Making the hair with hair tubes

I modeled the hair using several types of hair tube brushes, then I modified each clump individually to adapt it to the shape needed and added more or less geometry as required. For complex areas, I edited them in Maya to have more control of the intersections between each other and adapt the topology better.

The bottom of the hair was complicated to resolve. At first, I tried to form it with individual clumps as the rest of the hair but it looked very complex and wouldn't read well. Finally, I decided to simplify it and create a solid volume in Maya (like a hard surface piece) with details similar to the hair clumps on the back.

I started the top in Marvelous Designer while the character was in T-Pose since I find it easier to create the patterns and modify them quickly without the intersections of complicated poses. Once I was happy with the overall result, I waited to have the body posed and then loaded the new body as a Morph Target (you can see the settings in the images below). It’s essential that both of them have the same topology so they can blendshape. This way, since it produces an animation from pose A to B, I also got the natural wrinkles in the sleeves that are caused when you move the arms backwards and the pinching of the fabric between the arms.

I also applied a little bit of “pressure” on the sleeves to achieve the inflated look they have on the concept.

In this final position, I adjusted better the length and the ruffles and added a smaller particle distance to get the maximum details from the fabric (and avoid artefacts on the surface in Maya). After that, I created the topology in Maya with the "flat to pose" method:

From Marvelous, I generate a good UV arrangement for the garments and then I export them in pose and in flat mode. Then in Maya, I create a good topology on top of the flat patterns with quad draw+livemode. Then it’s the moment to transfer the UV attributes by world space from the flat pattern in triangles to the flat retopologized patterns we have created. After that, I transfer the position of the triangled mesh in final pose to the new flat retopologized patterns that now shares the same UVs(If the result needs more resolution I subdivide before this step). Then all is left is merging the pieces and creating seams were needed. With this method, you also keep perfect UVs which is very useful later for texturing.

For the trousers, I modeled them directly in Maya since they were very tight to the skin and the holes had complex shapes, then I exported them to ZBrush to subdivide and add more detail and wrinkles.

For the ripped parts, I used the Curve Tube brush to create the threads, then I tweaked them and added some thickness variation.

I modeled the shoes in Maya too.

Posing and final details in ZBrush

I posed her using transpose Master while the clothing was still on an early stage and before adding details to avoid unnecessary deformations on the mesh.

First of all, I defined the line of action from the concept. Then, I applied the contrapposto principles (this classic pose causes the figure’s hips and shoulders to rest at opposite angles, giving a slight s-curve to the entire torso) and pushed the pose a bit further than the concept to make it more dynamic. Before my final pose, I usually do two or three different poses quickly and then I refine the one I like the most.

Once I was happy with the overall, I worked on the silhouette of the hair, added asymmetry on the face, worked on the final clothing (as explained on the step before) and created the UVs in Maya. As I wanted to use a simple shading, I textured it in ZBrush with Poly Paint and then I exported the maps to Maya.

The lighting and rendering were done using Arnold for Maya. I used a total of four lights for this scene: One area light with warm colors to be used as the main light source, another with blue tones for the rim light to get the edge contour and separate the character from the background and two extra area lights for fill and backlight(to get rid of dark areas). For the close-up render, I also activated DOF from Arnold. Then, I rendered the different passes and did the final comp in Photoshop.

Top tip: Give it a break

There is always a moment while you are working on a new character when things can get frustrating and you feel like it's not improving. My advice is: rest rather than give up! Get away from the pc for a while and return fresh. Also, you can try to do some drawings to figure out that volume or part of the concept that you can't get right. 2D will help to see it from a new perspective!