Lead modeler Darko Mitev shares the process behind the creation of “Oris City”, an atmospheric sci-fi city scene, with part 2 – defining the buildings. Made with Maya, V-Ray, Substance Painter, and more…

One building at a time

As I mentioned in the previous chapter, doing all the models in one scene would make things slow and hard to work with. So, after I exported each building to a separate file, I also exported the locked camera, and the HDRI light into a separate file as well, and I referenced them at the start of the modeling process so I knew how things would look like from the camera  POV. After the modeling was done, I placed custom lights and I did the look development  in the separate scenes to have faster render times.

I tried to be as clean as I could be with my modeling. I used a combination of subdivision and poly modeling to get the project done. My initial idea was to go subdivision on everything, but that would have made things even heavier and harder to work with. One technique that I like to use is to do a poly model with the bevels modeled in, but to have the topology very clean, so if I need to convert it to a subdivision mesh, all I would need to do is just add more edge loops and tweak a little. 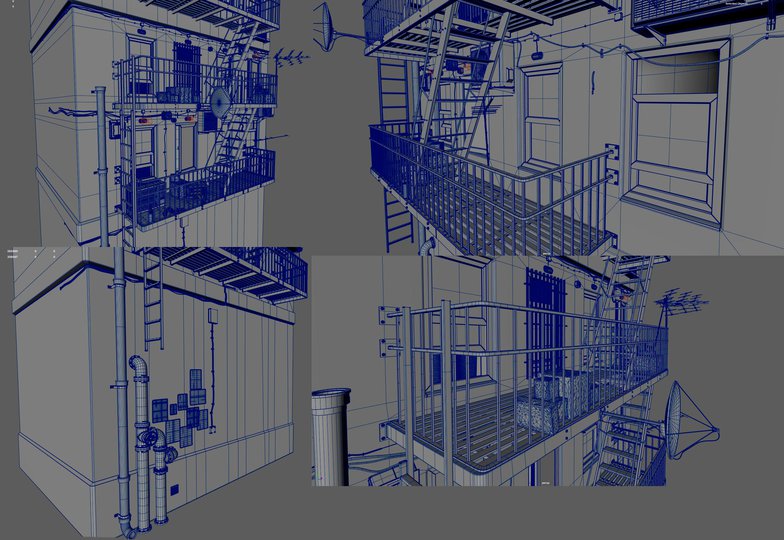 It’s all about the details

Once we have all the models of the hero buildings done, it’s time to really go and spend the time where it matters. Based on the POV of the camera, I like to pick parts of the buildings and really go to town with the details. I usually try to balance the composition, so that I have enough details and areas of rest in between. Detailing every building is time consuming, but it is what distinguishes the good from the great model.

In the end, I had 12 hero buildings, detailed just enough so they look great from the camera POV. If you notice on the screen shots, the buildings are not detailed all the way. That is because they fit together like Lego blocks and what goes outside the camera, I didn’t even bother detailing, because it will never be seen. 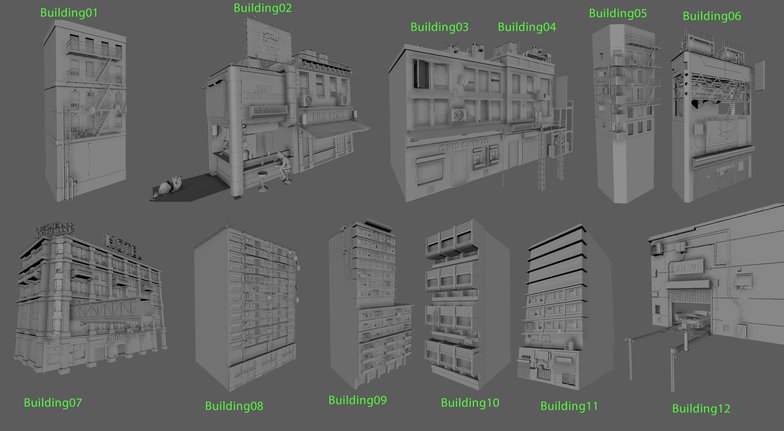 Modeling the rest of the buildings

The rest of the buildings were a lot looser in terms of details. They were so far away that I didn’t have to spend my time making them look perfect. I scattered the pre-made assets like the antennas and ACUs to make them appear like they are on par with the rest. Some buildings were done based on an image texture. I would take a plane, map a texture of a building on it, and start splitting and extruding to make the details.

The Under City was one of the last things I resolved because it was so complex. I wanted to make all the other buildings and props first, so that I can use all of them to kitbash the Under City. For this scene, I made sure that the Under City looked complex and compact from the camera POV, but in reality there are large gaps that the camera doesn’t see. I plan on making another project where the Under City will be more visible, so I left room for some things to be resolved in future projects. 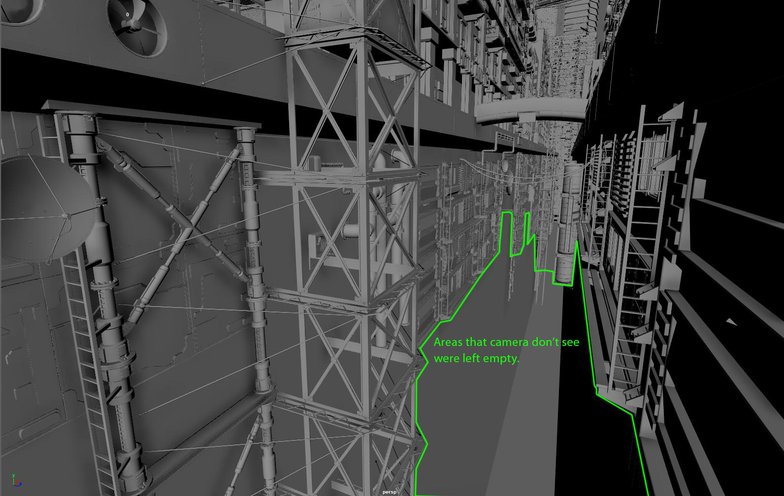 Don’t be intimidated to start large scale projects just because of the time it takes to complete them, time will pass anyway, you might as well spend it doing something that you will be proud of.

If you don’t have a concept that you are trying to follow, make sure you write a short background story of the piece you are trying to create. Then, based on that, find as many reference images as you can. This will save you lots of headaches further down the line!

Make sure you take your time during the block out stage. Don’t rush this! Set your camera as early as you can, and start building your scene from the camera’s POV. This will ensure that you don’t waste time detailing areas that won’t be seen!

Read part 1 of this tutorial here: Create an atmospheric sci-fi city – part 1: inspiration and blocking out