Petr Vykoukal takes us through the 3ds Max, Ornatrix, and Substance Painter workflow for his delightful “Ridiiing!” concept, as a Spaniel races past the Arc de Triomphe on a Vespa!

My name is Petr Vykoukal and I have worked as a 3D generalist for 11 years, mainly working in the advertising industry. In this tutorial I would like to describe the process of creating my artwork called Ridiiiiing! Even though it is not a step by step tutorial, I am glad to describe and explain my workflow, the challenges I faced during the process, and share some tips I consider useful.

Where the idea came from?

An idea to create this picture is a bit of a coincidence and the mixture of several things. It all started when I visited Paris while on my holiday trip. The vibes I could feel in the city resonated with me and with the feelings of freedom I have when riding a bike, or watching my dog playing. It is all connected with the sense of unleashed joy. With the picture Ridiiiiing I aim to express this joy from the ride, in its symbolical and also specific form. 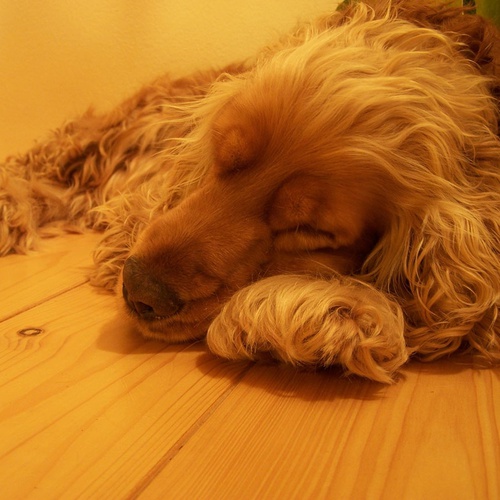 A photo of the dog modeled for this picture 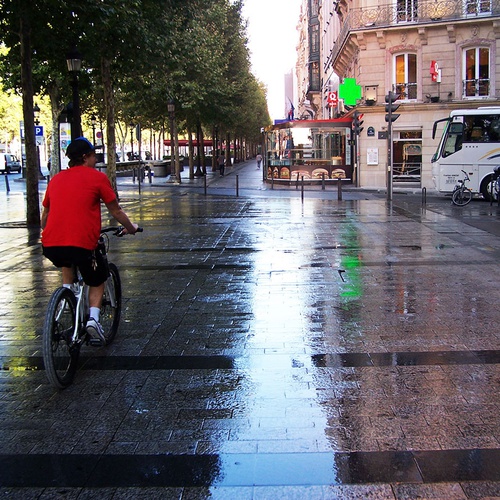 Another picture with Paris and bike

I like to create rough models and play around with their different placements in space, depicted from different camera angles. I often let the project rest on HDD and try to work on different things. This gives me the possibility to look at things like I have never observed them before, with the clear eye and less biased. I review if I’m satisfied with the idea and want to continue with working on it. 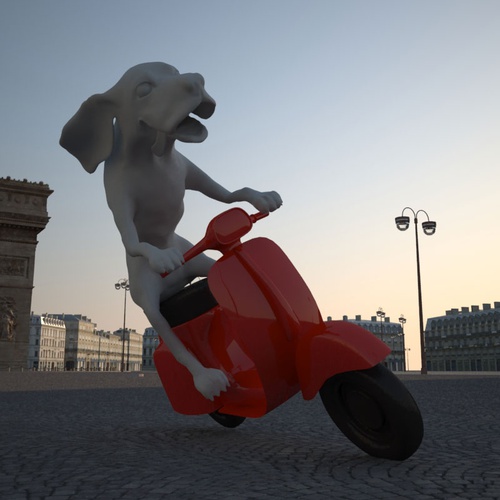 Early WIP image. Trying to find an interesting camera view which would show both the dog and the arc at the same time 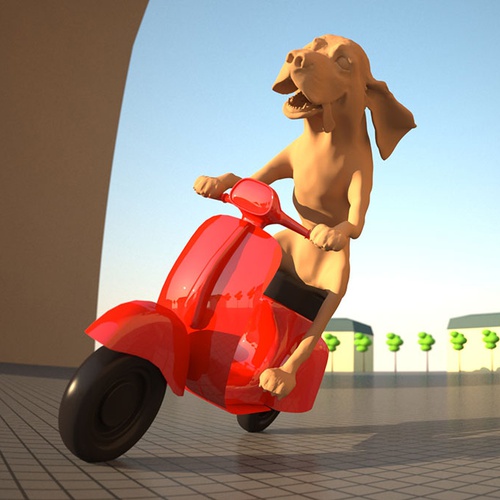 Early WIP image. Trying to find an interesting camera view which would show both the dog and the arc at the same time

At the beginning of the process, I was not sure about what kind of scooter type I should use for my picture. I was browsing the motorbike pictures and tried to imagine what type would satisfy my intended purpose of the picture. The old model of Vespa made the cut. I collected as many examples and references of this type and started to incorporate it into my work.

I don‘t think there is anything special I should mention here about my work that you do not know already from your own experience. My dilemma was whether to use a modeled pattern of tire or displacement. After a test with rendering a final resolution, displacement seemed to be okay. It is faster to paint the pattern to the texture, and I favored this choice as it is more editable and flexible for possible future changes.

Another suggestion about hard-surface modeling. I like to use freeform modeling in 3ds Max. This time it was helpful for the back mudguard and its vents. I used smooth underlying geometry of the guard, cloned it, created the meshflow, and cut the holes to make the rim. Then you can make precise embossed areas using the smooth reference and freeform tool’s offset.

It’s good to make some fast contrast lighting while doing test renders during the modeling stage.

After the UVWs came the texturing in Substance Painter. Every time I’m in this software I’m so grateful it exists. It can save a lot of time. You paint textures, build materials in your final 3D software and render looks as  you saw it in SP.  Mostly no other corrections of textures are needed. 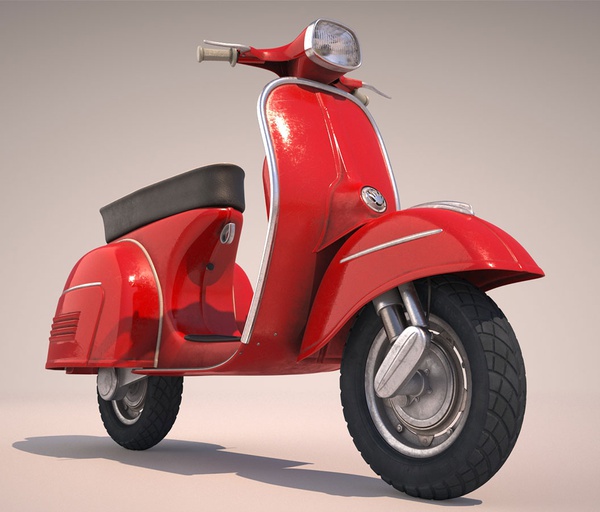 Test render to check the model 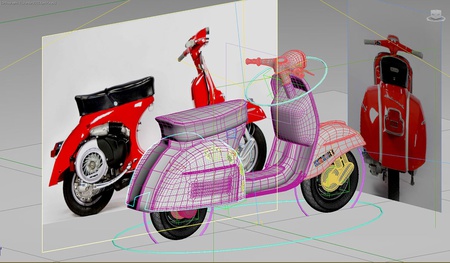 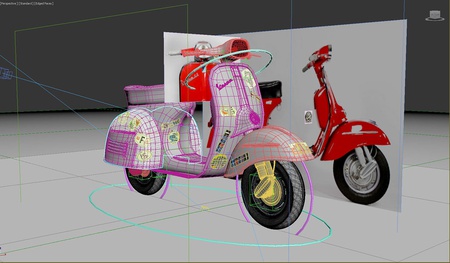 Model of the dog

As I had no intention to animate the scene I didn’t make a rig and posed the dog in ZBrush. I’m always trying to finish the model with all its details and still in symmetrical mode, remesh it, and create UVs. It saves almost half my work. After these steps we can break the symmetry and start with posing.

I used shapes and sweep modifier to create the ledges, and as much symmetry as possible. It keeps the model easy to edit in case you are not satisfied with the final look. I wanted to customize the Arc for the picture where the dog rides on the scooter. So I created repeating reliefs with the dogs instead of the ones on the real monument. I used ZBrush to sculpt them with zremesher. Unfortunately, these sculptures are unreadable in the final composition where the Arc is too small.

UVWs were done with flat mapping and stitching in 3ds Max. Textures were made with Substance Painter. I’ve used this software for maybe 3 years and for the whole period, I’m being kidnapped how much time it can save.

I kept these objects as simple and low poly as possible to minimize the work and poly count. After one building was finished, I cloned it and modified it to three other types. Most of these objects have tileable textures blended with black material. I used V-Ray dirt as a mask. Inserting the dirt map into the output slot enables you to play with the appearance of the dirt map. Use some of the procedural maps to control the dirt’s radius brings variance. Only the roofs were textured with Substance Painter as I wanted to have strong reflections under control. With tileable texture, it’s not entirely possible. Shining windows have big planes behind the glass geometry with self-illumination material. 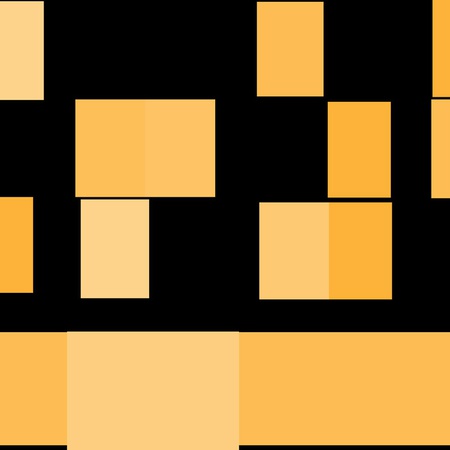 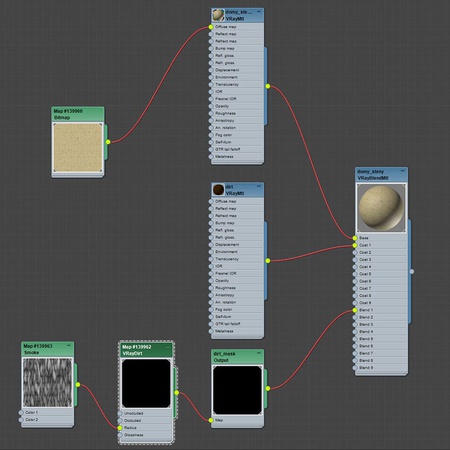 Structure of the material used for buildings

As I have almost the whole scene finished now (except the dog’s hair and the pigeons), I decided to set the final lighting and to do the post-production. I wanted to fine-tune the fur with some appropriate lighting. It also enables me to look at the post-produced image with a fresh eye and try to improve it before the final steps will be done. The basic element of lighting in this scene is done with a dome light with HDR image. Then I added other lights to draw all the important objects.

Some of the buildings windows don’t use the planes I mentioned before but have a small plane lights behind the glass. The city lights and the lights of the cars use two lights in one. One of them with lower intensity is visible and makes the glass/plastic shine. The other one with a higher multiplier is invisible for the camera but builds diffuse light and reflections/specular. I have chosen this way to avoid overburning the visible light sources, and have more intense

When I’m working with Ornatrix I mostly try to achieve the best result with “surface comb,” “length,” and “frizz” modifiers and textures to control the slope, length, frizz, and thickness. A great help when painting textures for the hairdo is to use the Substance Painter and create your own channels for thickness, length, and so on. Everything you are planning to use.

Then you can update all these textures together in one export. But the cocker spaniel’s fur is too complicated, so after I got the best result with my usual procedure, there was a need to add the edit guides modifier. I played with the “hair clustering” and “strand curling” modifiers; their parameters and their order in the modifier stack. I saved many test renders, always noting the parameters I changed to compare the results retroactively. 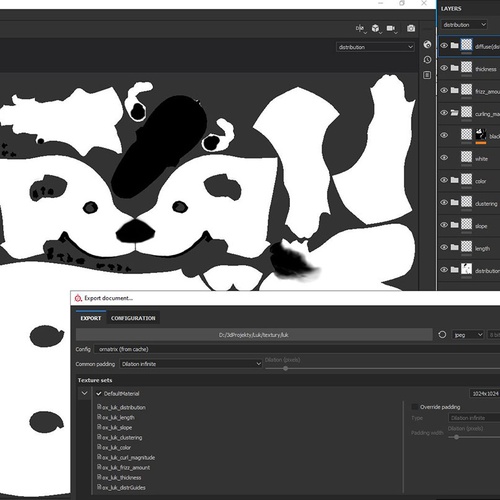 Set of texture channels and export settings in Substance Painter 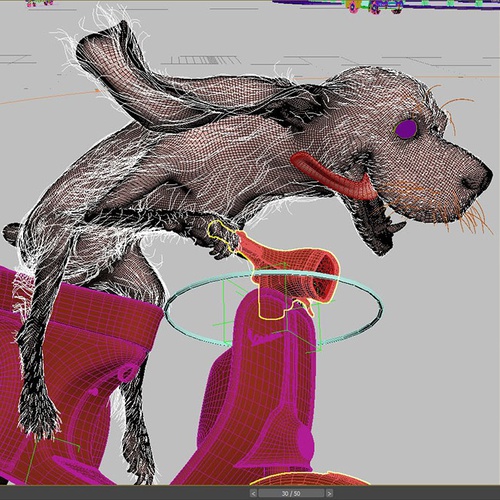 The bird’s feather is made with Ornatrix too. The pigeons are fully rigged. It made the posing of the pigeons pretty flexible. But after everything, it was a bit challenging to set the pigeons’ poses I would be satisfied with. It always acts a bit differently in viewport than in render. So I rendered the image without pigeons and another render of pigeons with alpha channel. I mixed the renders and tweaked the birds’ poses and placement in Photoshop. Back in 3ds Max, I set the pigeons according to this “sketch.“  This was the last step before the final render.

Finding the right pigeons’ placement and tweaking the poses in Photoshop. I tried to find a fine-scale (distance from the camera), bending the wings

I am used to using 32-bit TGA renders and using as many adjustment layers in Photoshop as possible. It allows me to do non-destructive adjustments and quickly replace renders and get new results easily in case of some changes in the scene. I was thinking about the water splashes. If to simulate them in Houdini and render them additionally or to do them in post-production. I found a fine photo which I was thinking it will suit/work, so I did them in 2D at the end.

Good references can save a lot of work and can improve how the things you’re working at look like. I’m working mostly in advertising and everything has to look pretty over there. So I learned to use references for materials, lighting, atmosphere. When you will see some beautiful photos for example you may find that something you are going to render can look much prettier than you were intending to do. Trying to get closer or overcome it can improve your work a lot.