In this tutorial we will look at the making of my latest image called Chloe. Chloe is a super hero. She is the smartest human on the planet and can build anything, and solve any problem. She was part of a series of characters I created to explore the idea: what if everyday school kids got super powers. So in this tutorial we will cover the basic concepts of design, sculpting, modeling – with a focus on topology, texturing, and lighting, doing hair using Xgen, and rendering in Redshift for Maya.

The main thing that I think of when I am trying to design characters, is their personality. Before starting any design I go and write a quick back story of the character, describing in detail who they are, how they look, their age, habits, what they wear, where do they come from, what kind of society they live in, and so on. After that I usually open ZBrush and start sketching a quick design sculpt using basic primitives like spheres and cylinders. At this stage I am trying to find a basic silhouette, and I am not worried about specific features.

Basic structure of the head

After the block out I dynamesh the primitives together to start finding the character. Dynamesh is great for the exploration of different designs really fast. You can push and pull things around to get different variations of the face, without worrying about the topology. At this stage, I think a lot about the personality of the character because that will determine if I will use rounder versus more angular shapes. Chloe for example is one big sphere. If you analyze her face, there is a very little flat and sharp edges. I wanted her personality to be calm, confident, and very lovable. She has a very kind heart and soft calming voice. She likes to keep things for herself, she doesn’t need to prove to anyone that she is powerful. She knows she is and it’s not a big deal. 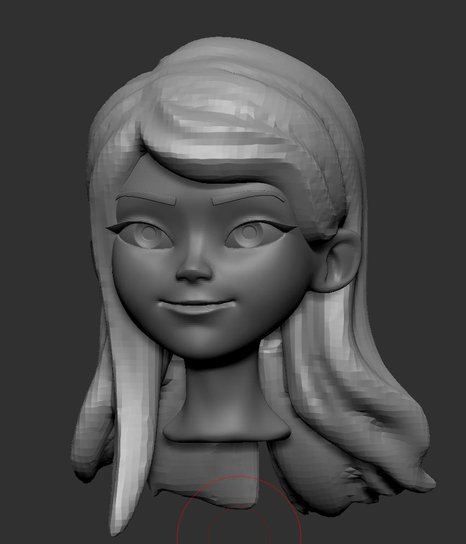 Refining the face and retopology

While Dynamesh is great for shape exploration, I find it very hard to clean and polish characters for final render. So after this step I went in and did a retopology, which allowed me to capture the same look of the face with much fewer polygons, and most importantly to have structure, that will serve u well when polishing the character. I used Maya’s Quad Draw tool for this step. To do that is very simple. I imported the Dynamesh sculpt in Maya, activated the Magnet icon and started drawing polygons on the sculpt using Quad Draw. 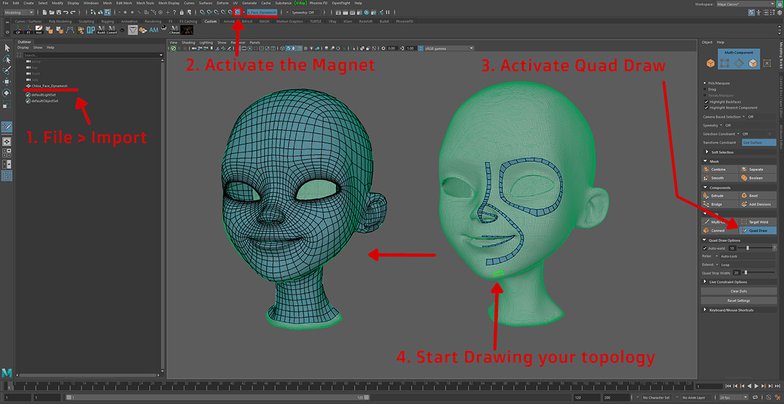 Topology on the face can be quite complex. There are many different topology styles but they all share similar principles. There are usually circular loops that run in concentric circles around the eyes, the mouth, and under the chin, that goes through the Nasolabial fold, and ends on top of the nostrils. When you bridge the gaps between these loops, you inevitable create Poles. Poles are topology junctions, where more than 4 vertex meet in a single point. They are needed to redirect topology, but they don’t deform well in animation. 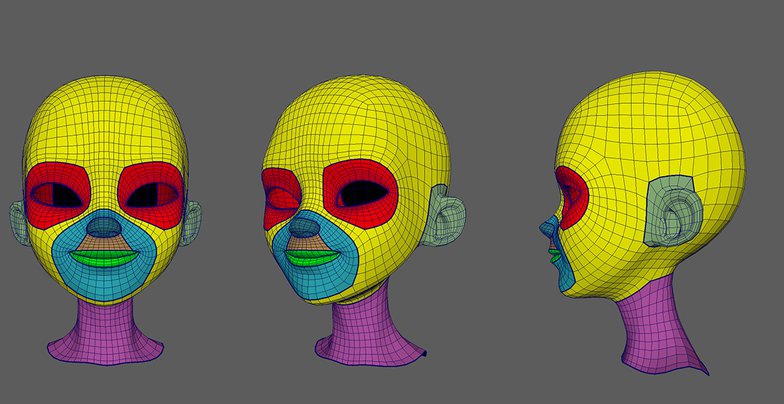 When doing topology, one thing to remember is to keep the number of spans on the top and bottom eyelids (same for mouth) the same, so when they eye closes they meet nicely and form a straight line. Also if you align your poles on the border of a concentric loop you will get even distribution and nice deformation in animation and you can make really nice facial shapes. Last but not least, poles should be avoided near crease lines (at least 2 or 3 loops away) because they can cause texture stretching.

Sculpting the body and the clothing

The body was started in the same way the head was sculpted, and than retopologized in Maya. After that, I masked out the parts of the body in ZBrush where the clothing would be, and extracted them as separate geometry. Using the same process, I sculpted the clothing adding folds and wrinkles, and than retopologized it in Maya. The boots and armor pieces where modeled in Maya using box and edge extrusion modeling methods. 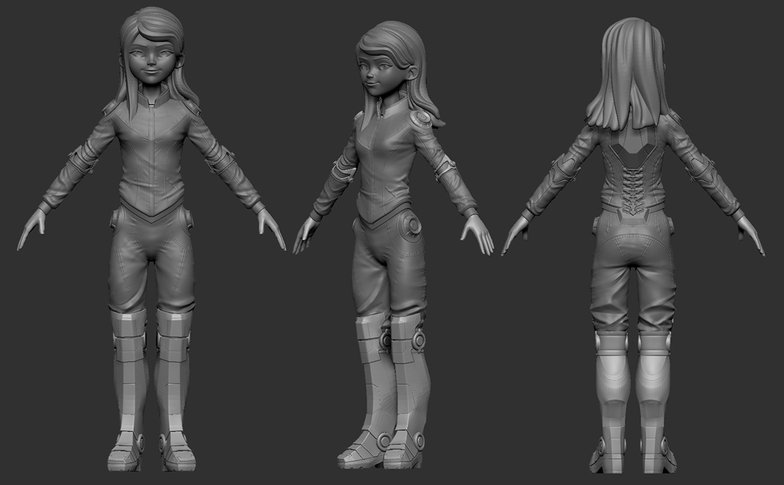 After the initial model was done, I decided to pose the character, and make it more presentable. I also used the opportunity to show more of her personality through the pose. I posed her using the Transpose Master tool in ZBrush. It is very easy to pose characters this way, because you are essentially masking parts of the geometry and moving them in place. Because of her complex armor pieces, the pose took me a while to do, and I also decided to model the hammer and the armor around the arm to enhance the appeal. 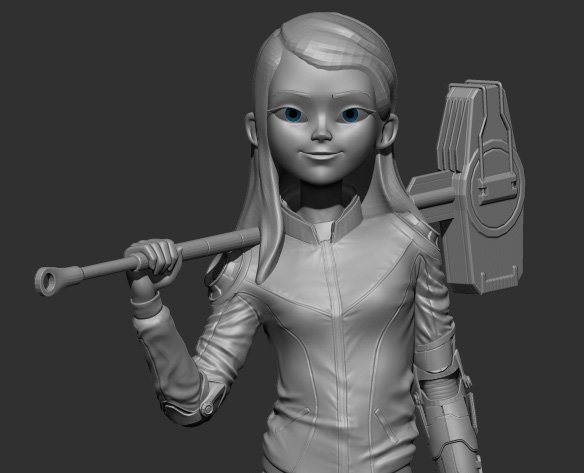 The textures for Chloe were done in Substance painter. The face was very simple; I pretty much hand painted the diffuse map using fill layers. Instead of painting the different colors on the face with normal layers, I used fill layers and painted a mask instead of where that color would be visible. I than used a few grunge maps to break up the roughness and modulate the color a bit. This is a very effective way of texturing because it gives you a lot of flexibility to change the colors and tweak values after you have painted everything. 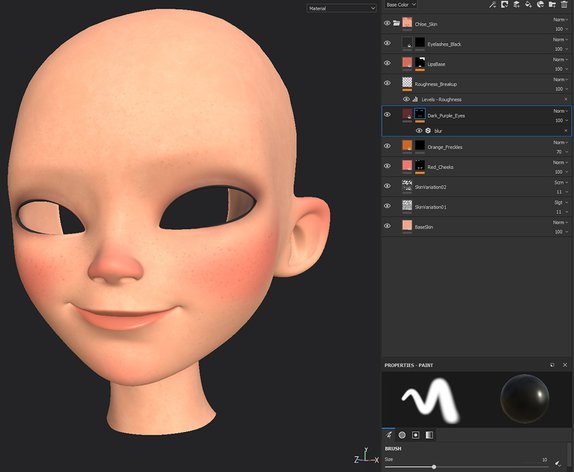 Texturing the armor & the clothing

For the armor, I started with a basic metal smart material, and started to build the layers on top. I created a yellow paint layer for the color, and using smart masks I added some chips and scratches to reveal the shiny metal underneath. Then I did the same for the black paint layer, and to finish the look I created detailed layer, where I painted some custom panels and screws and cut lines, to add more complexity. For the clothing, I used a few fabric materials from Substance Source and I mixed them together to get the final look. 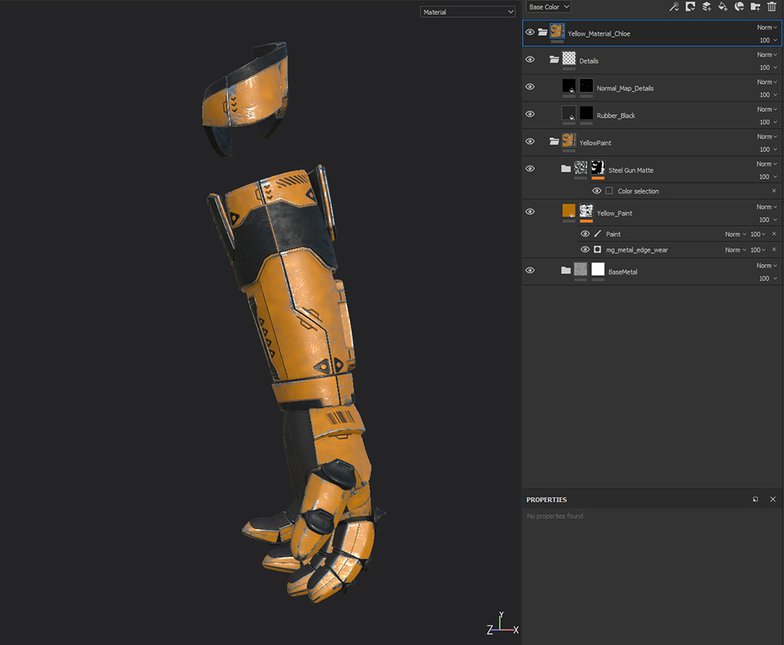 The hair for Chloe was done using Xgen. I imported the hair sculpt and started tracing it with the curve tool. After that, I converted the curves to Xgen Guides and started to groom the hair. I separated the hair in to multiple collections so it’s easer to groom and control. After that I painted density and region maps to have further control over the look. To wrap things up I added some modifiers like clump, cut, noise, and curl. After the hair was done, I added eyebrows and eyelashes, as well as tiny face hairs for peach fuzz. 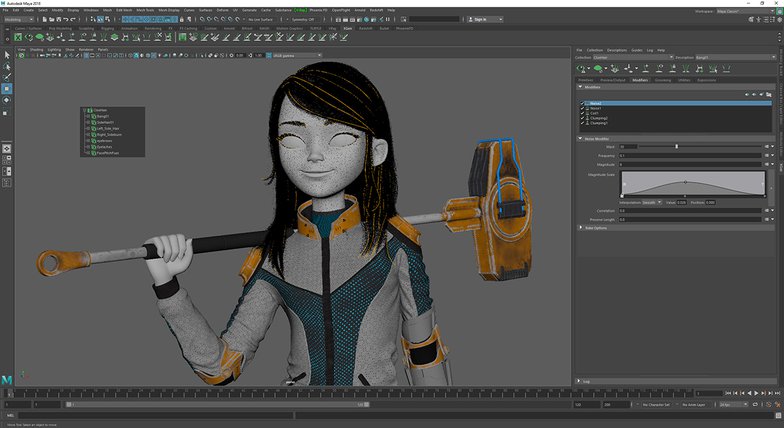 The lighting and rendering was done using Redshift for Maya. Redshift is a GPU renderer, and it is insanely fast, if you have decent GPU in your system. I used a total of six lights for this scene. One area light serving as a key light, three other area lights with white, blue, and orange colors as rim lights, HDRI Light for fill and reflections, and one area light set to disk, that is specular only light, linked to the eyes for nice highlights. 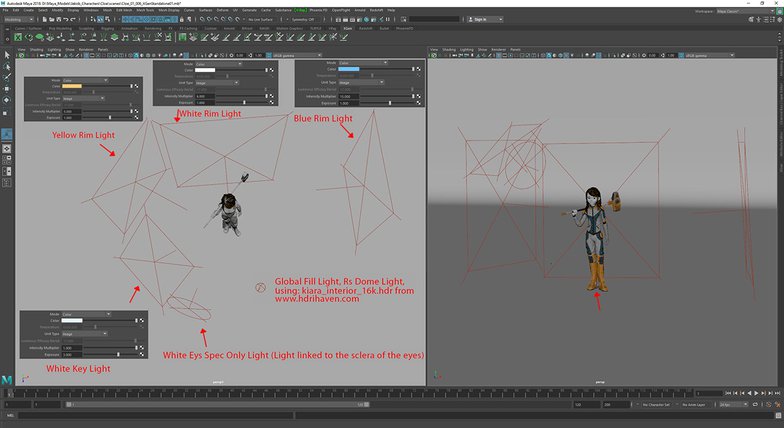 The render setup for this was quite simple. I used a combination of Brute Force, and Irradiance Point Cloud for GI solutions with 128 GI samples. For Antialiasing, I used Min Samples of 4, Max Samples of 256, and Adaptive Error Threshold of 0.008. I also activated the AOVs and decided to use AO, Reflections, and Specular Lighting as separate passes that I used in Photoshop to enhance the final render. 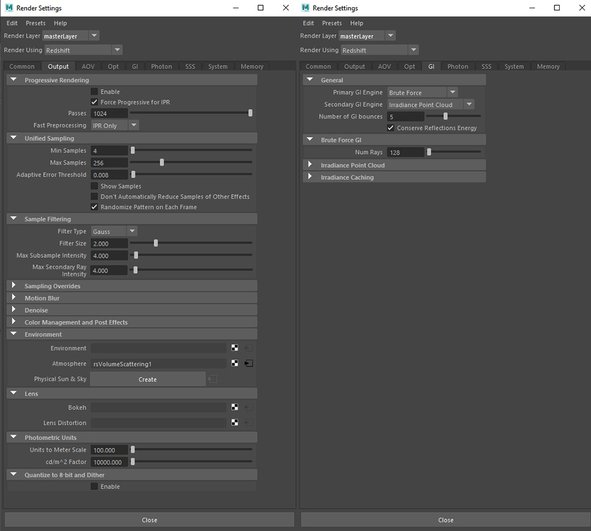