Character artist Tarek Samaan takes us through the workflow behind his latest image “Who eat my cherry?” using ZBrush, Blender, and Photoshop…

Lately I have been doing some real-life studies of mushrooms, so I decided to make a character inspired by a couple of studies I did on Amanita muscaria, commonly known as the fly agaric.

In this “making of” I will show how to take your finished ZBrush poly-painted sculpt to Blender and create an interesting simple light setup, create a subdermal skin texture using your poly paint only, and then render it in Cycles. In Photoshop I will show my process for compositing a final image.

This step is all about exporting a correct OBJ with poly paint information so later when importing to Blender, the poly paint would be assigned a base color automatically. In ZBrush it’s important to unwrap your model first using the UV Master plug-in, then go to UV texture palette and click on create from poly paint, and export as OBJ.

Adding lights to the scene

Once all OBJs are imported to Blender, poly paint textures are assigned to the base color for each object. Now we are ready for lighting. I used a dark HDRI night scene or underground scene as a starting point to get environment reflection and a little light, then I added color to the background by using a light path node. I added 4 area lights to get the mood I was looking for. 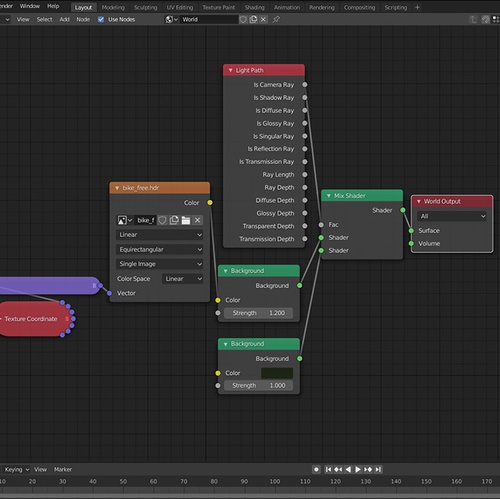 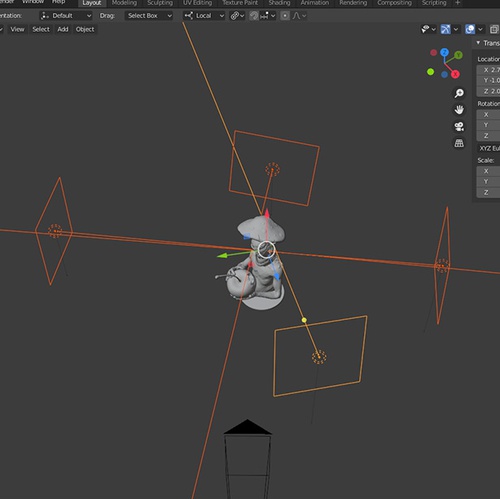 Dappled light is a spotted or sun light which typically comes through gaps in a tree canopy. I felt the lighting scenario was missing that forest feel so I added spot lights with two planes as gobos to create dappled light. You can use sunlight instead of spotlight as well. I like using texture on a plane rather on light so I can change the light type later if needed. I blur the gobos texture in Photoshop a bit rather than changing light size in Blender since the second option produces lot of noise. I put the spotlight size to 0.

My character has a lot of skin, so I needed a simple way to create subsurface scattering. Of course I needed a subdermal texture. I took the base color texture and plugged it into the hue/saturation node. I also created a curvature and roughness map for specular and roughness slot, and had to use color ramp to adjust the textures a bit. I did the same thing for the rest of the character. I gave the cherry piece a bit of transmission and a nice grunge tileable texture.

After finishing tweaking the shaders, now it was time to render. Often, I try to adjust the camera FOV to get the best shot; I also try different angles and do some early renders for testing some post work ideas. I wanted the character to look right at the camera to make it look like he was asking the viewer (who ate my cherry?). I kept my settings very simple. I rendered using my CPU, so I had to reduce the tiles to 16px and did some testing before I got the best sampling.

I render 16- or 32-bit image format, this way I can have more control over the image in Photoshop. I find the HDR format very useful in Blender, when opening the image in Photoshop and converting it to 16- or 8-bit, the HDR Toning window allows you to adjust lighting, shadows, and boost details. I make different options of the image using this method and put them as layers for blending modes. I also rendered different passes to use in the compositing. For this artwork only normal, AO, and mist was needed.

My render size is 5000X3000 pixels, so I organized my layers and take the time to name each one to avoid confusion when working on details and adding extra layers. I Googled a forest-like background with green tone and blurred the image. I made a layer which had HDR Toning with details slider on +45 to boost the body details and masked out the face since the face details were boosted enough. It looked like the pose needed fixing as the body should tilt to the back a bit since he is holding a heavy cherry. 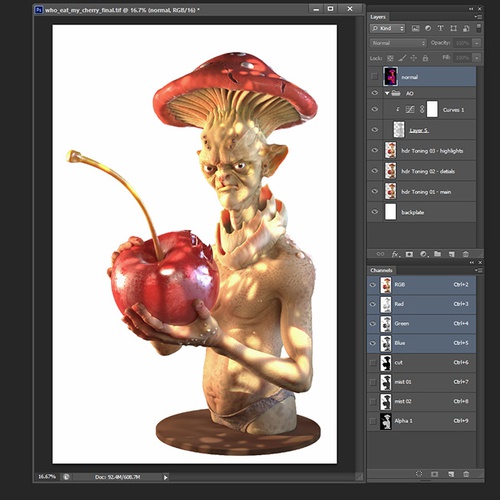 Compositing and adjusting the image 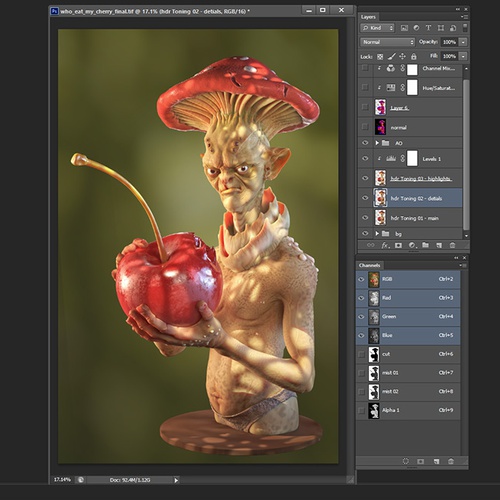 I slightly rotated the image clockwise to fix the pose and cropped the bottom area of the character. I retouched some areas where I felt it was needed – I wasn’t happy with the eyes poly-paint so I put some extra time in to enhance them. Initially the base was made in the sculpt phase because my plan was to 3D-print the character in the future.

Having a normal layer is great if you want to add or boost lighting in certain areas, you just have to use two adjustment layers (channel Mix and Hue/Saturation). In the Channel Mix reduce the red and you can reduce the green if needed, now go to Hue/Saturation and move the Hue slider, it will look like the green is rotating around. Now go to your channels hold control and click over the green channel, you’ll have a selection of the green areas. I added curve adjustment to boost the lighting 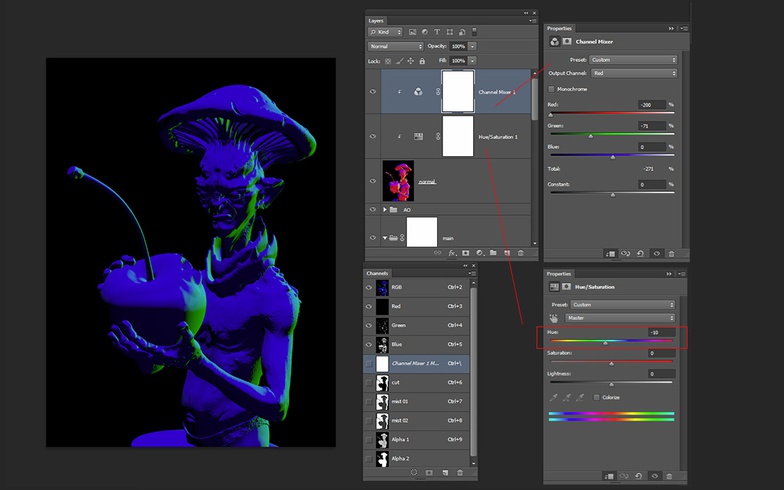 Creating a selection to adjust lighting using a normal layer 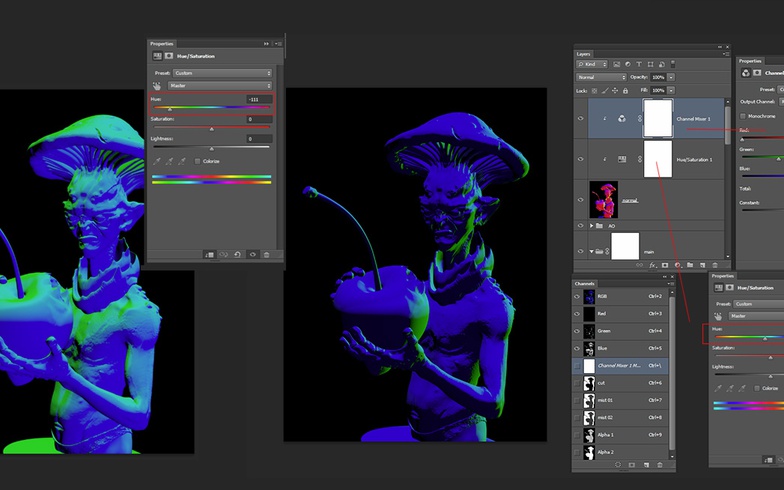 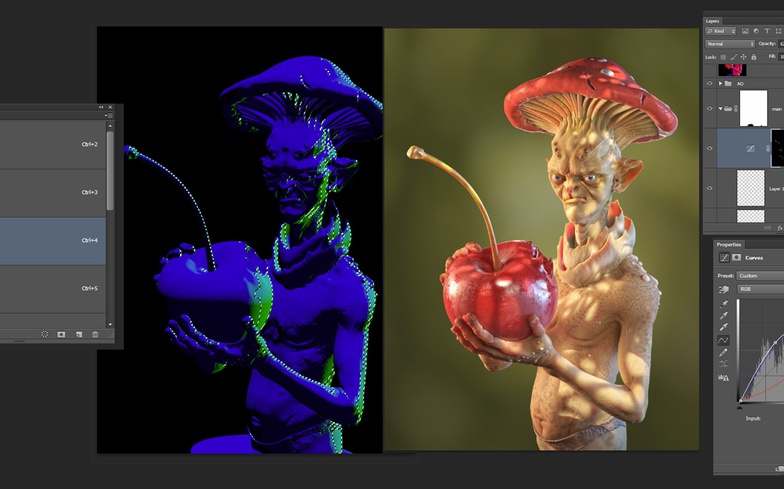 I am not an expert on this topic but I like to grade my renders to make them tell a story. I tried different looks and went back and forth until I decided on the final look. A good way or maybe fast way is to save a JPG image and open it on mobile to test the image under different photo filters. Once finding the look I wanted, I went back to Photoshop and tried to create a similar mood for my final image.

I keep going around the image and flipping it every now and then to refresh my eye and look for areas to tweak. I added vignette and depth using mist in the alpha channel and finally added some noise to reduce the sharp look of the 3D rendering, and blend the background. Also, I went back and adjusted the colors before calling it done. I try not to look at the image for at least 24 hours so I can see it again with completely fresh eyes, and maybe there is some room for tweaking.

Do some more renders and try different moods, you’ll learn a lot in this process. Adjustment layers are great to change your render mood completely and make your image pop.