As a Spanish Concept Artist and Illustrator I studied Fine Arts degree and Master in Design, moving into traditional way and digital techniques to create the best mood

What are the important elements from the text to focus on?
Alvaro Escudero: After reading the text I realized that there were two important characters: the city and the police. Represent the relationship between them and the sensation to be surrounded by huge buildings filled and covered by a neon sea is the direction and feeling to take with this. On the other hand, there are two movements; driving along and going up to the sky. Showing this speed and craziness through the colors of the lights and motion effects will be key.

What goal are you looking to achieve with the final piece?
AE: To show the characteristic color palette and mood in this future city environment. Something that can be very difficult if you don't have control of each part. There are a lot of elements and it can easily be chaotic, we usually feel a fear around this. So, we are going to learn how to get the full control here. Also, I want to tell a story in only one picture that avoids any confusion for the viewer. The selection of composition, colors, shapes and perspective is going to be the key to organize it all, and create a very attractive image.

As I like to say, the coffee creative moment. Take a seat, read the text, search for photos, and if you have any doubt about elements and their behavior, and finally use ink to start with the big black-and-white masses playing with the positive and negative. Go for compositional blocks. This scene can be complicated by too many city elements that we have going to organize as less blocks as we can. 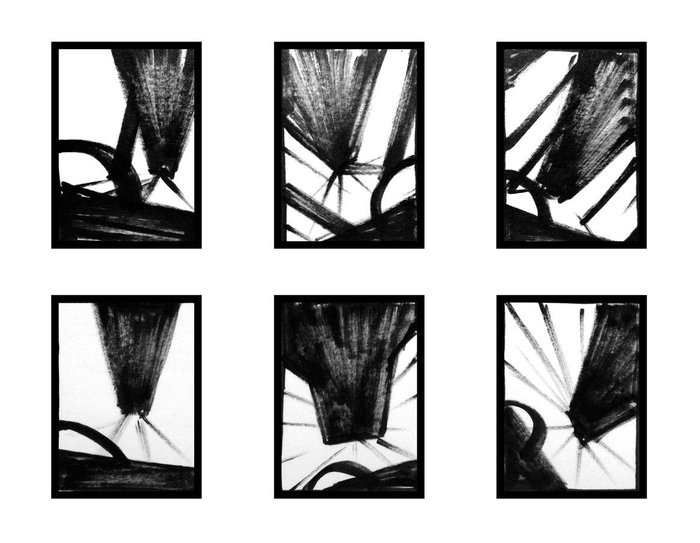 It is the moment to stablish all the elements that our picture is going to have. As I've started telling you, it could be complicated if we don't organize it very well from the beginning. As inspiration for this piece I studied the Akira movie. There are a lot of elements but also very simplified and established with three big masses; foreground, mid-ground and background. I decided to go with a two-point perspective. This was to include the police, with POV and 3rd person representation. I had the two key moments I needed. To connect them in the composition I liked the idea of integrating his face on the car mirror like another neon screen, using the same direction of the buildings, similar to comic vignettes. 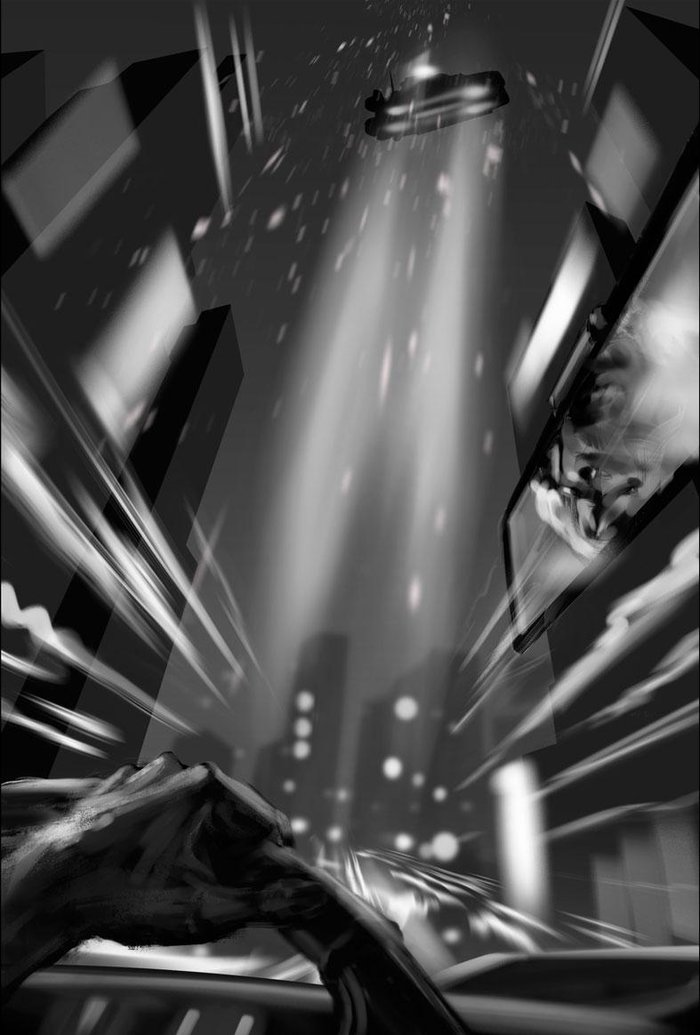 Be simple at the beginning. I like to start with the sky as it is the most influential light source. I divided the background into two blocks of buildings. I started with the silhouettes, helped by the perspective lines to create my own clean shapes. It is important from the beginning to add some color variations with the correct light conditions on the volumes. After that, I used some photos in light mode for the neons and windows, erasing some parts, over-painting and designing other elements. The transform tool was my best friend here. The same thing for the mid-ground, but I added a Motion Blur filter to show the speed. In the foreground for the car, face, and hand, I started the color block with overlay mode.

Here, I want to mention how I created all the neon sign details, and the kind of effectsthat I used in different parts of the picture. You only have to design a white form with the line tool. After that, apply a Layer Style with Outer Glow effect, I recommend Screen Blend Mode. Chose the color of the neon and you have it! Play with Spread and Size to find the correct intensity that you're looking for. 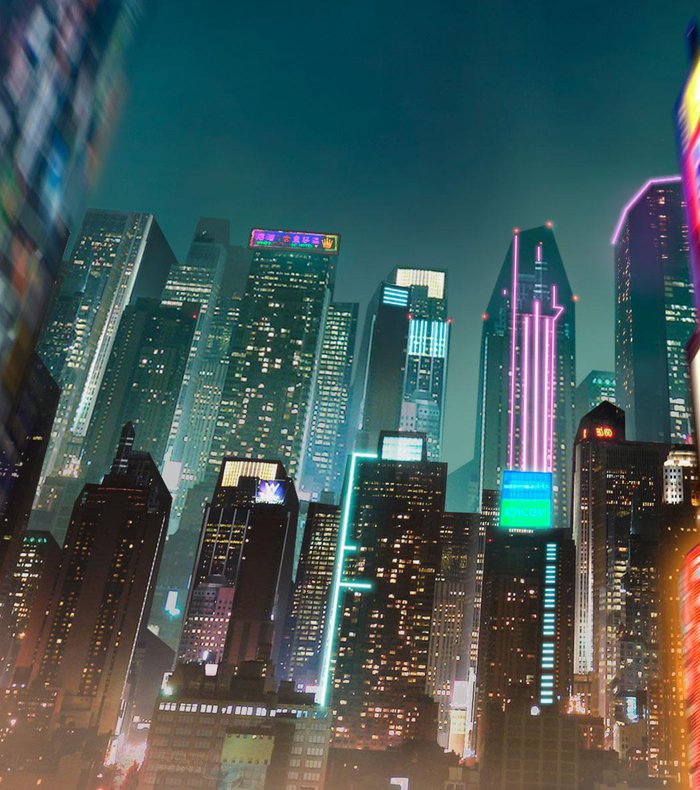 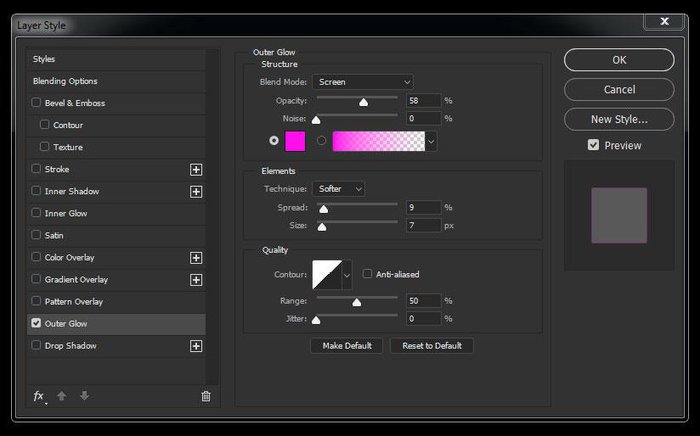 As you can see, I've hidden the buildings to show how the ray effect works. To create the square neons, I used the previous step 4 technique but using motion blur too. For rays I had to draw some white lines but this time I played with different brushes, experimenting. Finally, I used the Transform and Warp Tools to increase the motion following the perspective, while adding more Motion Blur. 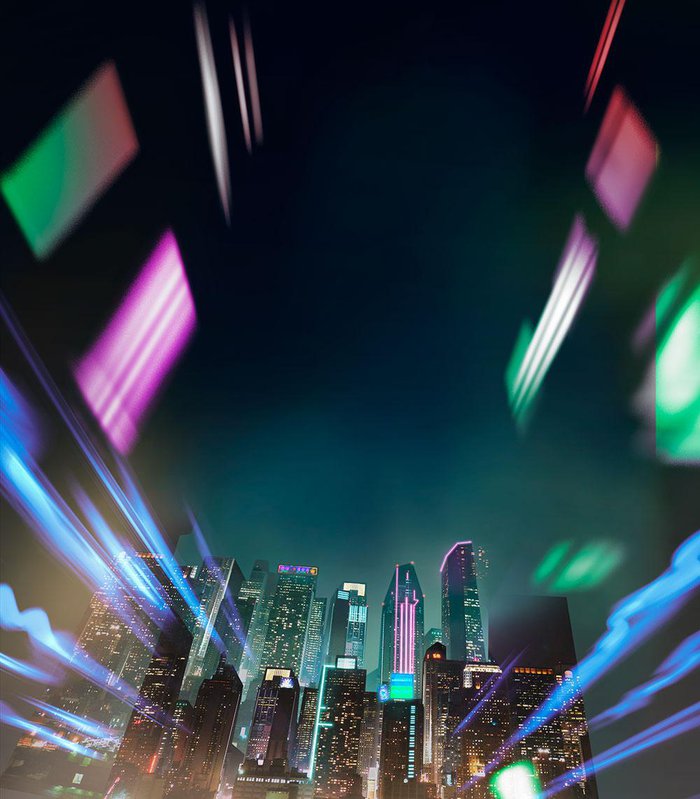 Now, for the color, I created a Gradient Map and took the ray I designed and linked both to a black full layer in screen mode. With this I could design other kinds of neon signs. In fact, this is useful for fire or highlights. Take time to test the gradient map color options. 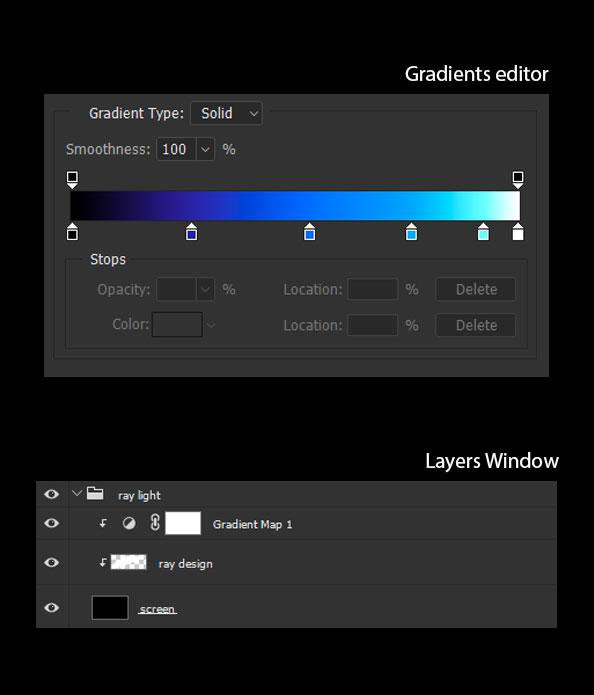 I began to bring all the effects together. I almost finished the background and mid-ground, adding the ground and some traffic with a hard motion filter. I didn't need to show a lot of detail, the intention was to create the correct mood and ambience, with speed, light, and awesome colors. In this way I could better show the city and motion sensation. 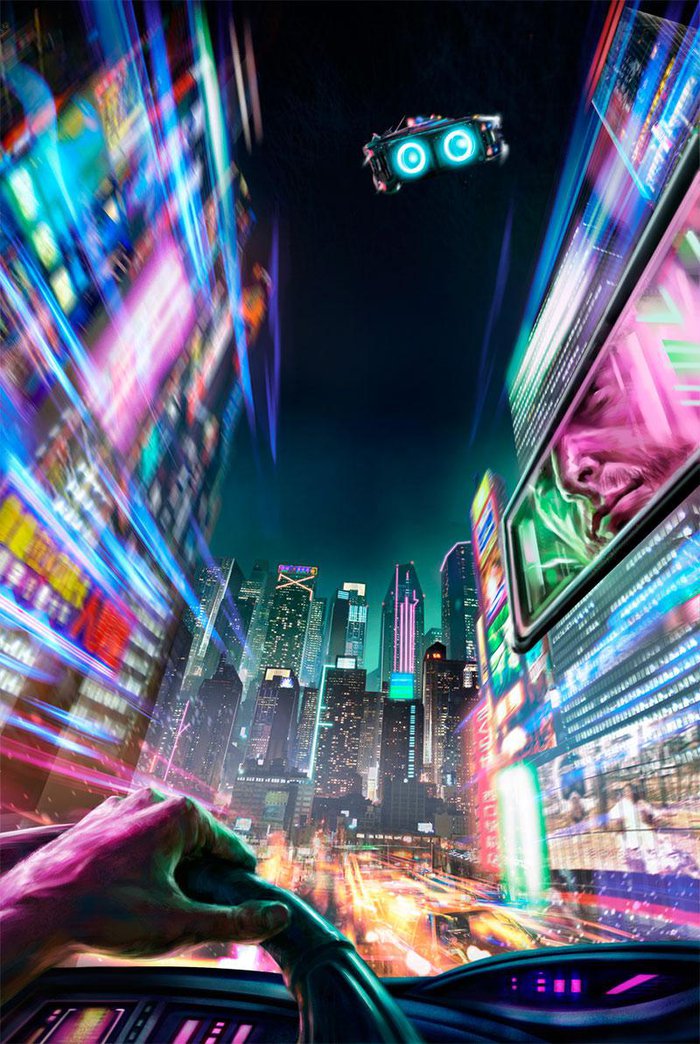 I began to concentrate more on the character rendering; the skin and the car design, adding the same neon effects. I took the liberty of flipping the light source on the face to improve the composition, and didn't divide the picture into green and magenta sides. Sometimes we can play with these kinds of changes, it depends on the work we are doing. This kind of verisimilitude here doesn't matter, with tes contrast it works better to read the sequence.

I left the rain effect for the end. It could easily work without it. To design it you have to use different dot brushes with different sizes, and then apply Motion Blur once more, using the Transform Tool to adapt the perspective. I used a couple of layers for this. I also improved the position of the flying car too. I thought about the idea to integrate some of the window of the car to show the difference between inside and outside, only very slightly. So I created a yellow reflection in the middle part with some dust and rain drops. For the flying car, I had to change the long light effect I designed on the sketch. It seemed more like a UFO than a police car in the end. 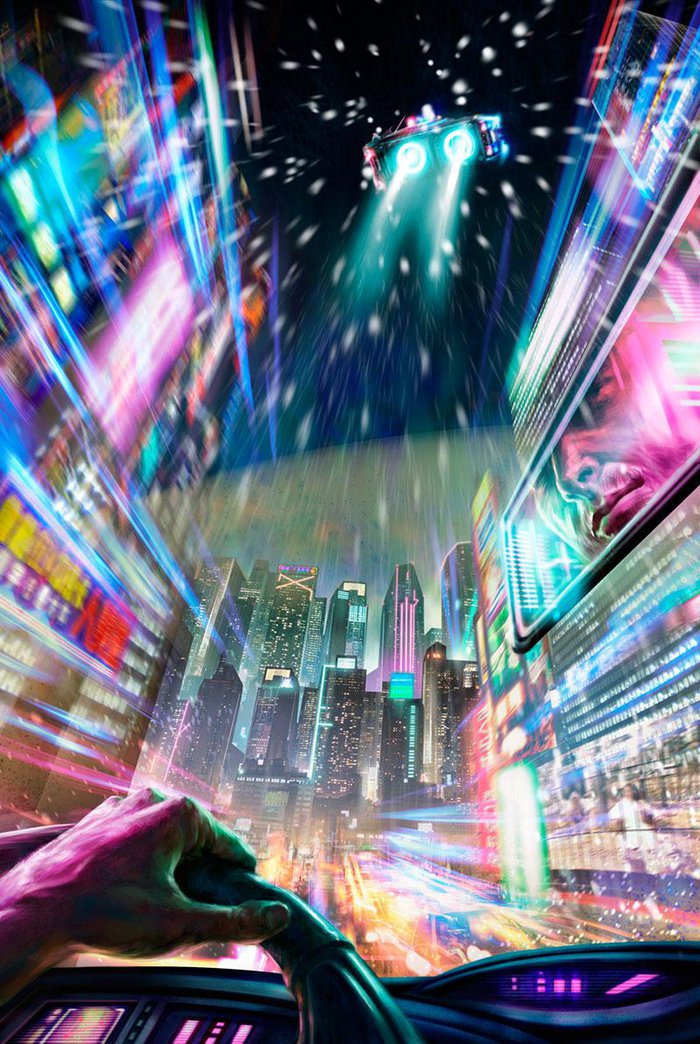 Finally, for the car screens and buttons I used a very easy trick. I drew some parallel white lines in Soft Light mode and then erased the parts that held no interest. 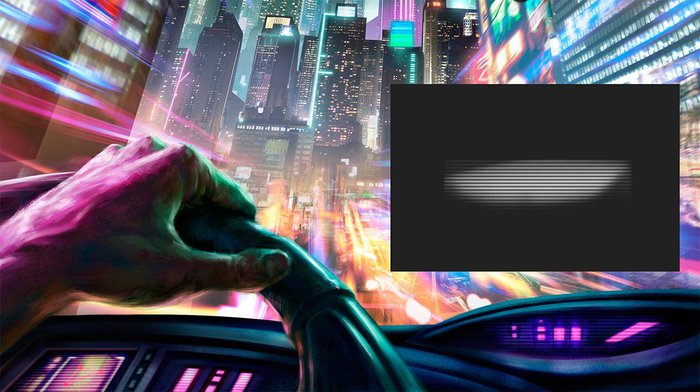 Before finishing, I decided to change the thumb position, as I wasn't very convinced with it. Sometimes this kind of thing happens. You really think that it works from the beginning, but step by step you start getting more and more uncomfortable with something and you need to solve it. It was cool because it was nothing serious. When I felt happy with everything, I made some color corrections through Color Balance and finally I added a Lens Correction Filter to improve the general artificial light conditions. 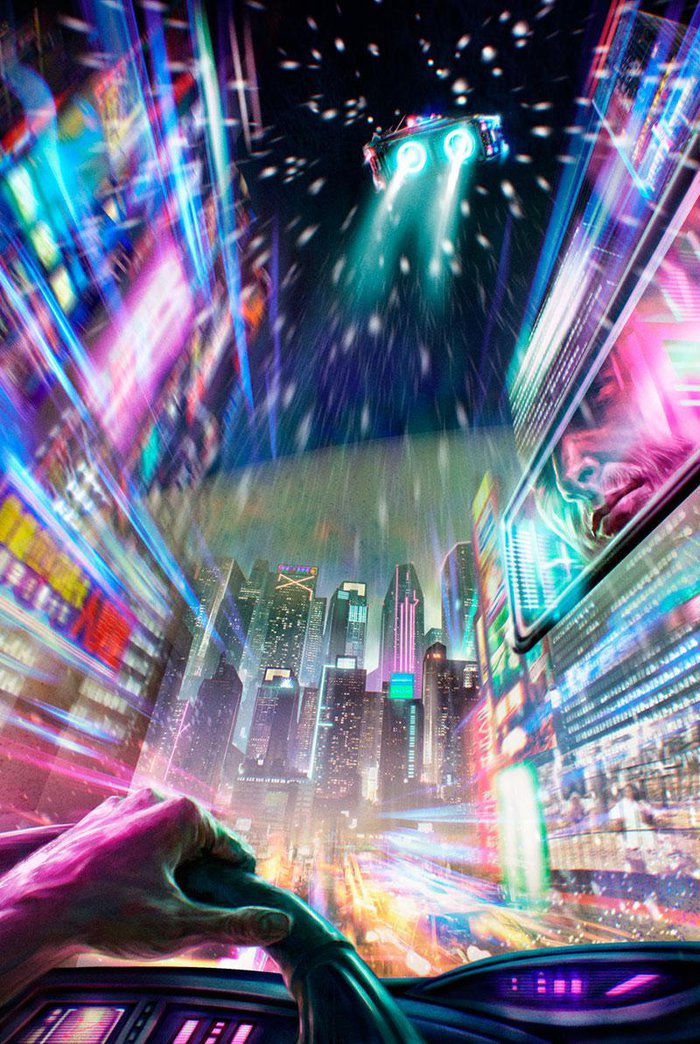 See more from Alvaro on his ArtStation

Check out another narrative tutorial: Rats on the Loose