Freelance character & creature artist Natalia P Gutierrez takes us through the ZBrush and Painter workflow for her female creature "The Mother" based on a Mahea Rodrigues concept...

Hello! My name is Natalia and I'm a freelance character artist currently living in Spain. In this making of I will show you some of the steps I followed to create 'The Mother', a real-time character done for Arstation's contest 'Beneath the Waves', based on the concept of Mahea Rodrigues, who also participated on the 2D category of the same contest.

Before starting to sculpt, you have to give a bit of thought to some stuff first. This is what I call the 'pre-production' stage. One of the first steps to every project is to search and gather your references. The software I use to display all my references at once is called 'PureRef'. I also looked at Mahea's reference board to see what she based her design on. My references include multiple marine animals and del Toro's Angel of Death, since I felt there were similarities between the two characters. 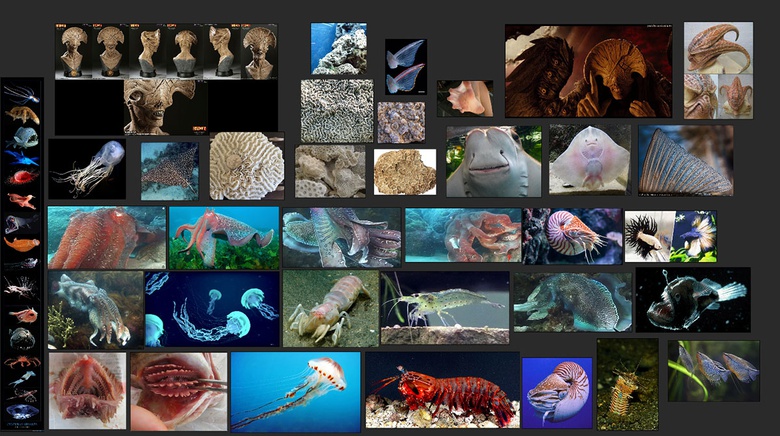 The second pre-production step would be to analyze your character and see how you can simplify it in your mind. This means interpreting how the different parts would look from a 3D view, and also interpreting what's not visible. This was an organic model that didn't have any complex hard-surface components or accessories, but I still had to think about how the organic body parts were built. To sum it up, you have to take the concept and make it coherent for yourself. This can be achieved by making annotations on the concept or even making a quick 3D sketch. 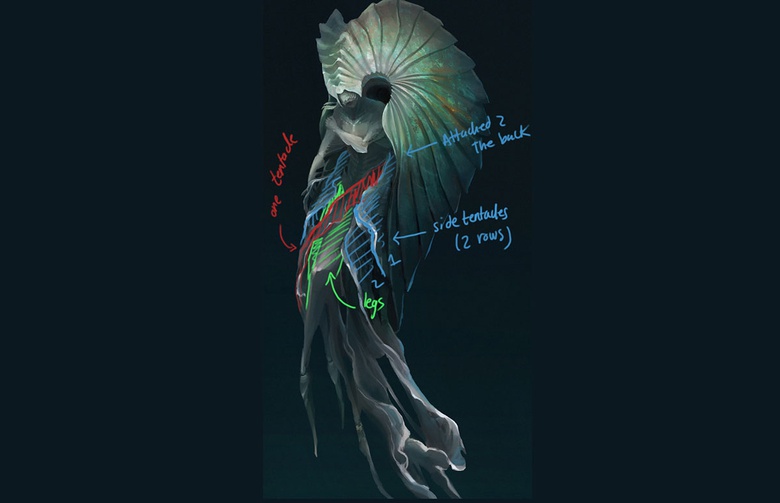 Once you have deciphered the concept, it's time to start sketching in the 3D space. I normally start with what I think is the most important part, in this case the humanoid body, and then begin building the rest around it. To sketch in this first phase I use primitives such as spheres and cylinders, or tools as the 'CurveTriFill' to quickly create geometry on the areas I want. This step is very messy as I'm only trying to establish the bases, using primitives, transforming them a lot, dynameshing them and then sculpting over them. You can see the brushes I use in the image. 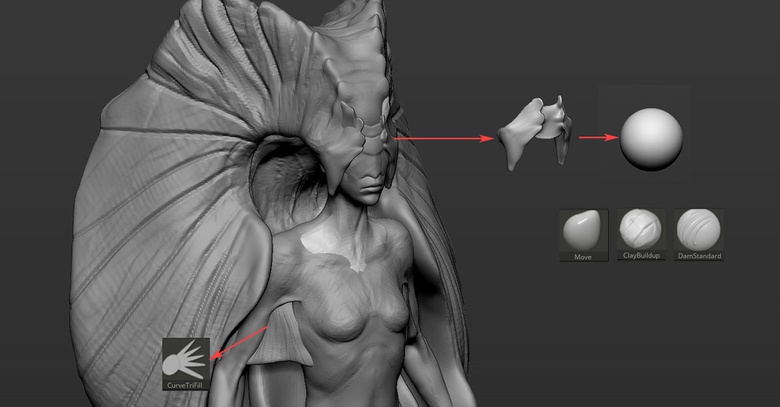 Now it's time to start refining the sketch, one part at a time. I keep using the same brushes as before, adjusting the size and shape of the different body parts if needed and sculpting a bit of shape and detail over them. I keep in mind the feeling I want the character to convey and try to reflect that while sculpting. I think the face is the most important part of every character. It concerned me a bit that this character didn't have eyes, as they are what reflects the soul of the character, but in the end, it was totally fine. 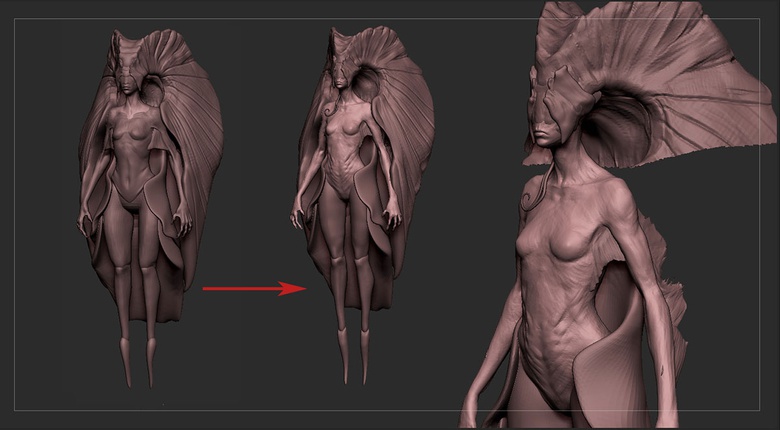 I continue refining the character, building more and more detail into it. For example, to make the organic hood, once I had the main shape established, I created one single 'scale', using a sphere, dynameshing it with low res, moving it around with the move brush and then sculpting a bit over it. Once I had this scale, I placed it on the hood, and duplicated it many times, adjusting each individual scale with the move brush until I had the whole hood covered.

I continue sculpting detail and building the different elements using the process I described (creating primitives, shaping them, and detailing them). I mainly use the ClayBuildup brush, sculpting detail in the areas that I think need it. I was unsure about the hood's texture and feeling, so I ended up sculpting some kind of cavities that would give me more detail on the bakes and texturing process. In this step I slightly changed the creature's anatomy as well thanks to some feedback received in my contest's thread. 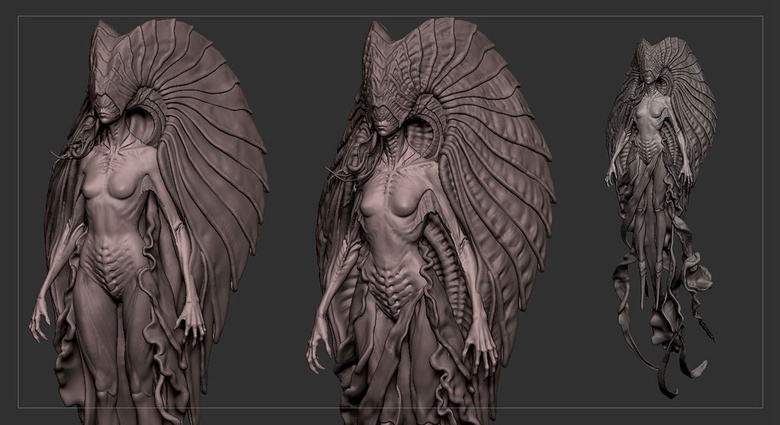 Once I considered the model to be finalized, I added some detail using alphas, trying to find some interesting pattern for the creature's skin. When adding alphas, it's useful to make use of the 'Morph target' option and layering system, to be less destructive with the model. Once I had detail information on the model, I did a quick polypaint base using 'Color Spray' and masking the model by cavity. This step is optional but I like to import this Albedo base in Painter to get a feeling of the colors I'm going to use. 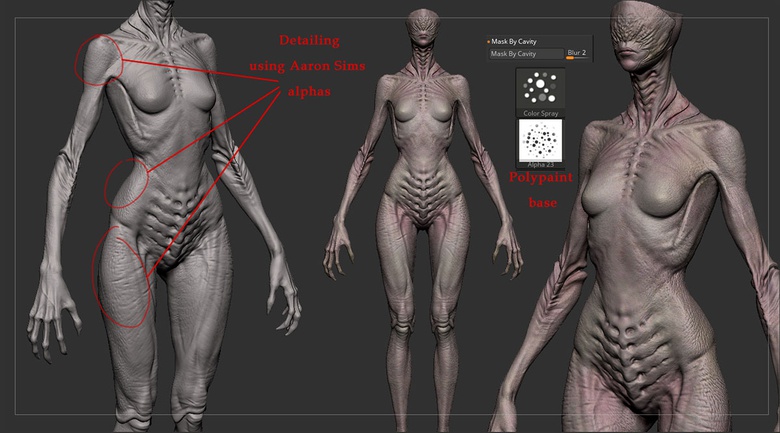 Retopo of the model was done using Topogun, and the UVs were done inside UVLayout. I decided to separate the UVs into two chunks to have more space for details, would I want to detail it any further in Painter. To create the topology of the more asymmetrical parts, such as the lower tentacles, I ended up using Zremesher, as it proved to be a much quicker solution. 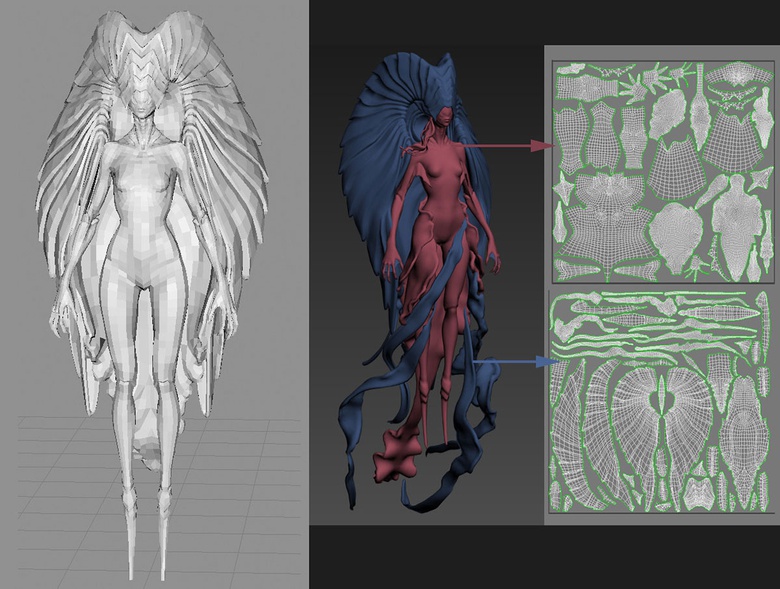 Step 9: Creating the textures in Painter

With the bakes ready, I started the texturing process inside Painter. It's a good idea to generate maps outside Painter and import them to be used as masks and have more control of your painting. Some of the maps I generate are concavity and convexity (from my normal map), and a hand-painted cavity map from ZBrush (polypainting the model black, masking by cavity, filling this masking with white, and exporting as texture). 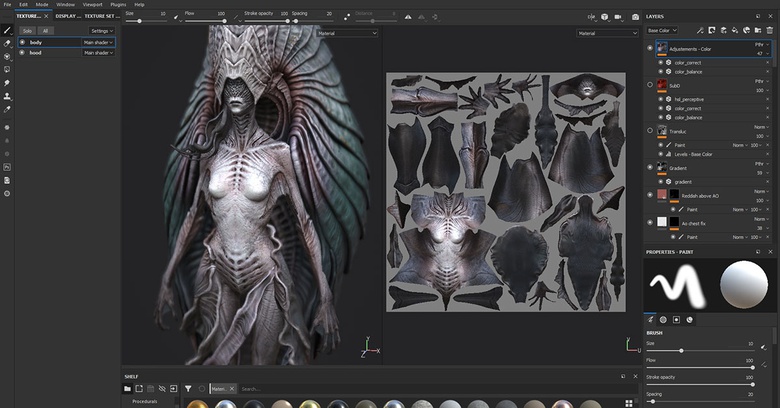 The real fun begins! Now that the model is finished, it's time to render it using Marmoset to make it really pop out. Once I've imported the model, I select one of the sky boxes, reduce its brightness, and start placing omni lights by hand, controlling each of its settings. What I generally try to achieve in my scenes is a dramatic lighting, with shadows so that the model doesn't look flat (a top spotlight can help) and rim/omni lights to bring out its silhouette and little areas of interest. The brightest area of your model should be the centre of attention. 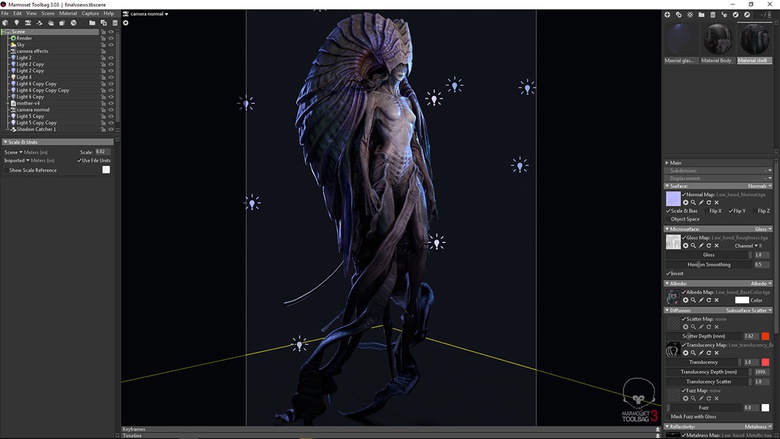 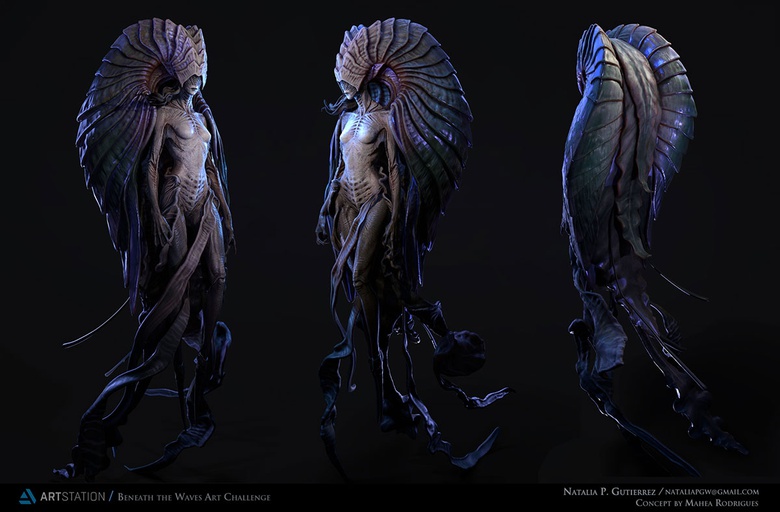