3D artist and creative director Valery takes us through the creation of her award-winning arch-viz image “Ballerina Loft,” using 3ds Max, ZBrush, Marvelous Designer, Corona Render, and Photoshop. In chapter one, learn about composition and planning…

In this tutorial, you will be presented with the process of creating the loft scene. Please note this is not a tutorial in modeling techniques but an exposition of a specific workflow. Each stage of the work is explained presuming you already have basic knowledge of modeling, lighting, and rendering in the following software: 3ds Max, ZBrush, and Marvelous Designer.

Ballerina Loft is an architectural interior winner of second place in the Evermotion competition “Whole Lotta Loft,” published in 3D Artist magazine, in CG magazine Taiwan, and Creativepool Annual 2017. You’ll be taken through the process of modeling in 3ds Max, ZBrush, clothes creation and cloth simulation in Marvelous Designer, lighting and materials creation in Corona, rendering setups and a short non-invasive post-production in Photoshop using “photo looks” and “knoll light factory” filters from Red Giant. Hopefully in the end you will have a general understanding of what the project involved. 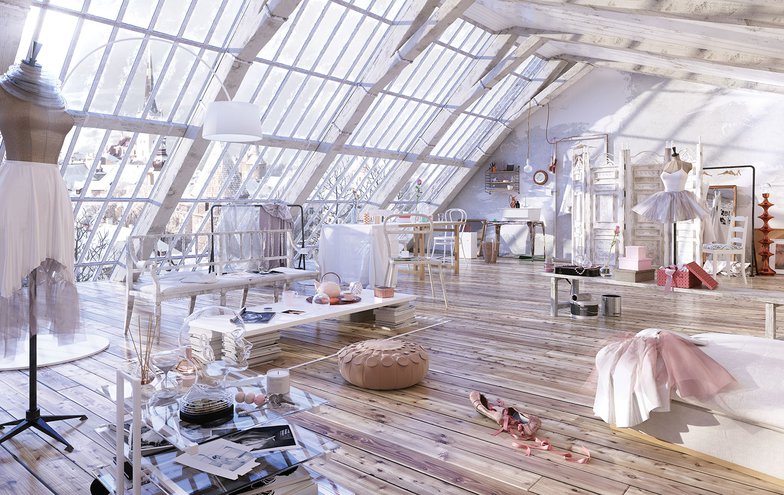 Step 01: Looking for references and inspiration

I was inspired by an interior design editorial and from the moment I saw the pictures of that space I decided it would be perfect for a ballerina, so I thought I would carry on this spontaneous idea. Research is very important for any project so I looked again at some Degas paintings, watched films, and looked at many photos with ballerinas during the time I worked on this. 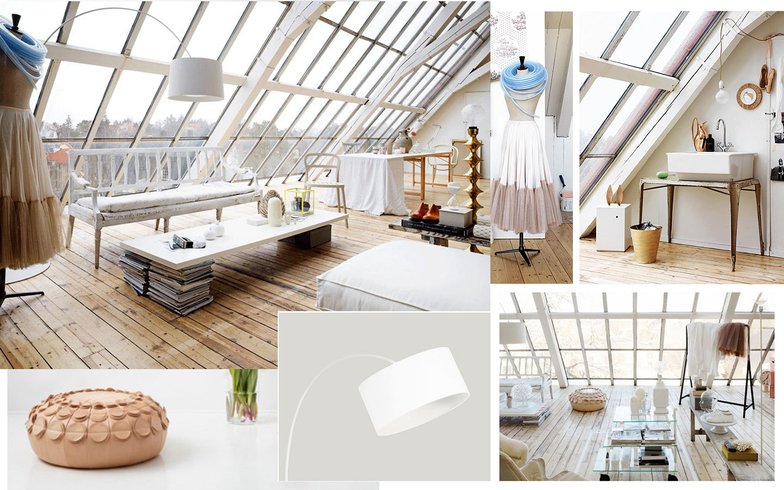 I particularly liked the style of this editorial which I thought  showed beautiful architecture for a loft, but also had the potential to express the character of the person who lived there

First I modeled the wood structure for the window wall I had seen in the picture, trying to guess dimensions, using a biped as a helper to keep it at a human scale. I exaggerated the number of windows as my personal intervention to give it a wider feel and make it look more sophisticated. The structural woodwork being the most important element defining the architecture, I sculpt it in ZBrush trying to achieve a more realistic look like old solid wood with cracks and imperfections. This is not a ZBrush tutorial (I’m not an advanced ZBrush artist) but I have included the ZBrush files in the assets for this tutorial just for you to take a closer look if you’re interested. (at the bottom of this tutorial) 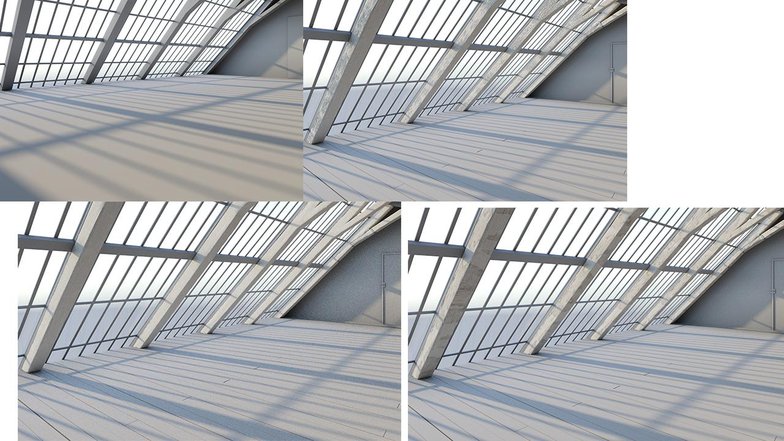 Finding a feel for the overall empty space, and starting to setup basic lighting to give me an idea of how to move ahead with the overall composition through the movement of lights and shadows

Next, I detailed the objects in the scene one by one, starting with the objects closest to the camera. Meanwhile, I kept changing the HDRI and sun intensity and position looking for the best lighting and shadows. This is not part of the modeling process normally but is part of my personal workflow as I need to see how the models look in natural light, or in the light setup for each specific scene, and do many test renders. 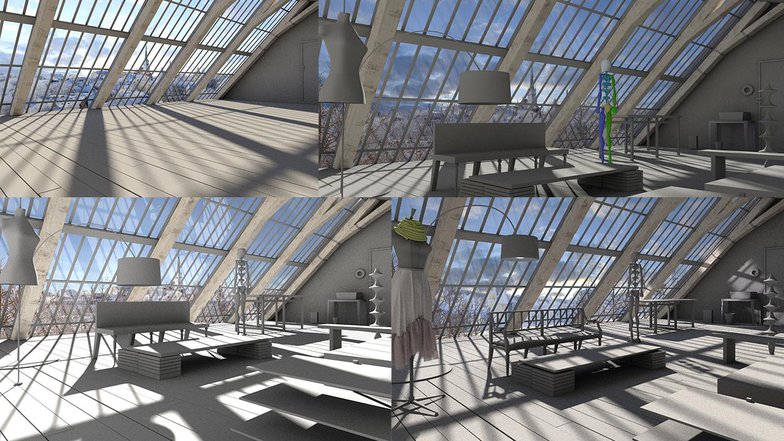 First test renders with the beginning of setting the composition by distributing the objects in the scene, taking into account the direction of light and shadows

Step 04: Populating the scene according to lighting and composition

As when painting, the usual process consists of working on everything at the same time. On a canvas you would start drawing the main elements then apply neutral shades of light and dark in thin layers to block out the shapes for when you apply the color – it circulates all across the image resulting in a unitary composition. I start modeling but at the same time begin texturing, lighting, and making early render tests to check the overall result throughout the project. 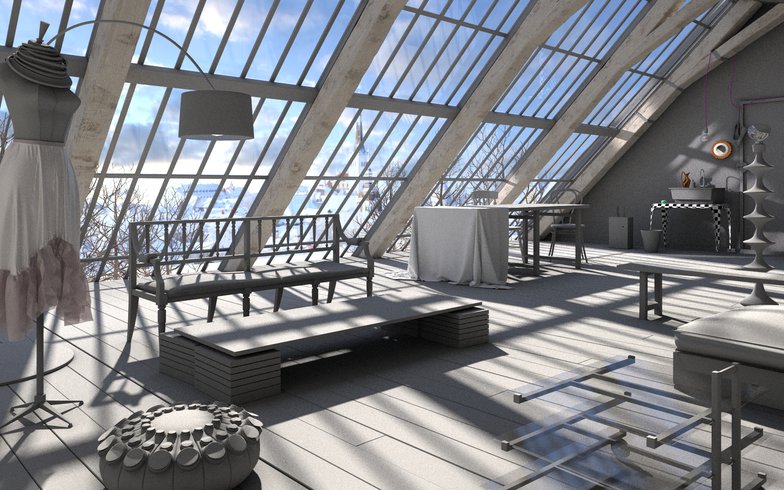 Model detailing and an early start on lighting and texturing. Also distributing objects in the scene in a first attempt to set-up the composition

Although this first test render does not reflect exactly the final camera setup, it is very important to think from the beginning of how you want the composition to develop, what are the main force lines and directions you want the eye to follow, and if you want your composition to be static or dynamic. I started to see a certain rhythm, a musicality that was given by the very dynamic architecture of the window wall with those dramatic diagonals, so I wanted to work with that. 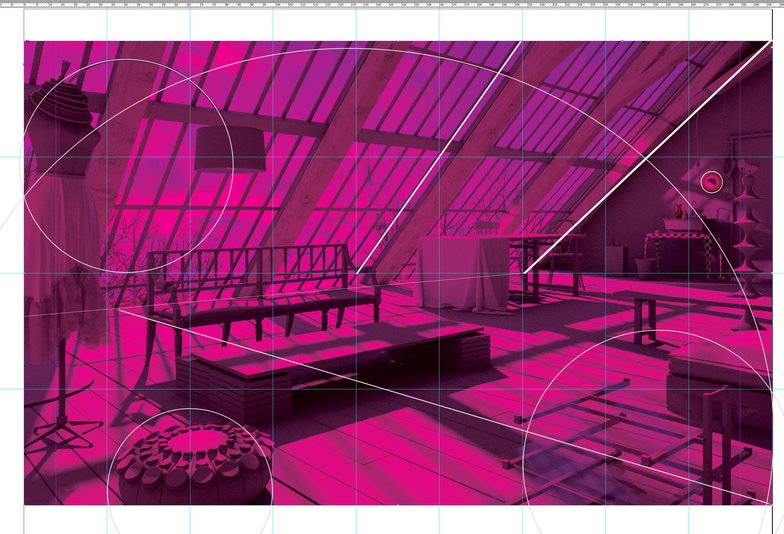 I divided the frame in a grid of 4/6/9 (double diapente) to help me see the interest points in the first plane, and to guide the eye around from the upper-left corner to the bottom-right in a semicircle

Especially when you create an architectural interior you have the option to buy models from different sources. I’m totally in for that (especially for the background far away from the camera) but when you try to create a personal project, modeling is one of the ways you can express your personality, and give that unique touch to your image. 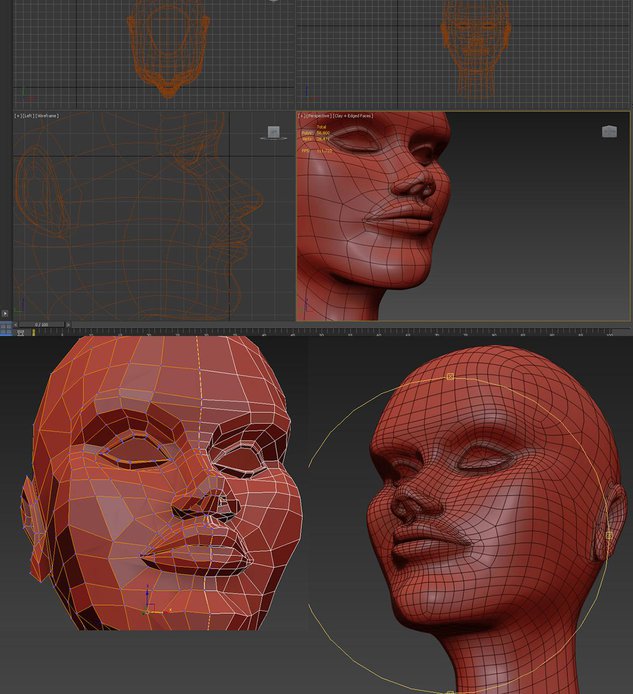 Step 07: Objects that tell the story

I modeled the ballet pumps without references and it ended up as quite a high poly model. After I modeled the first pair freely, I looked at references and decided that they didn't look quite like true ballerina shoes so I remodeled and positioned them in the scene. I didn't really like the result so I swapped them back again. Even if an object doesn’t look exactly like in a reference picture doesn’t mean it’s necessarily wrong, it could be better to have your personal touch as long as the object is still recognizable and adds to the story. 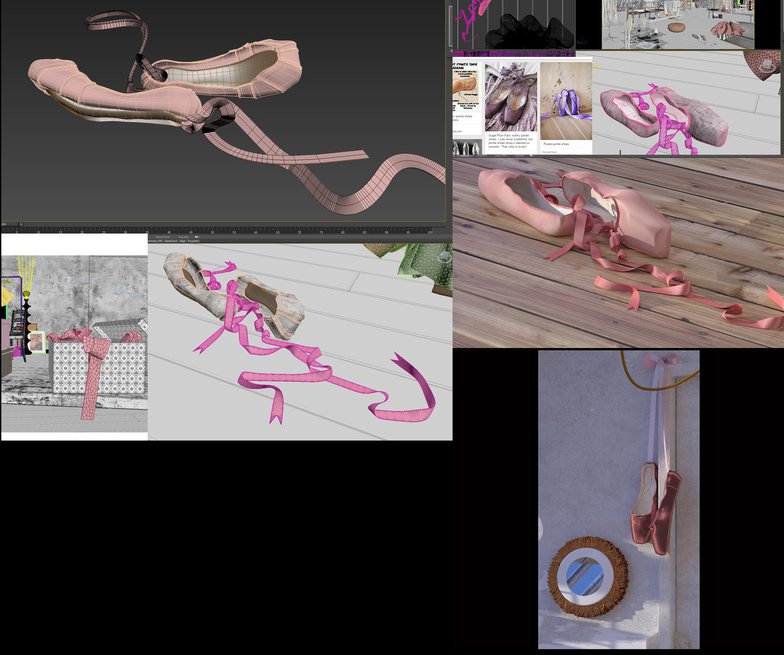 Initially, I used Splines for the ribbons but changed them afterwards as I thought they didn't look realistic, so I remade them in Marvelous Designer

Details can give realism and veracity to a scene but we need to have in mind the meaning they add and position them according to the eye movement the composition dictates, otherwise they only create clutter. For modeling, I use plugins like Turbosmooth Pro and QuadChamfer to speed-up my workflow and keep the models as clean and low poly as possible. 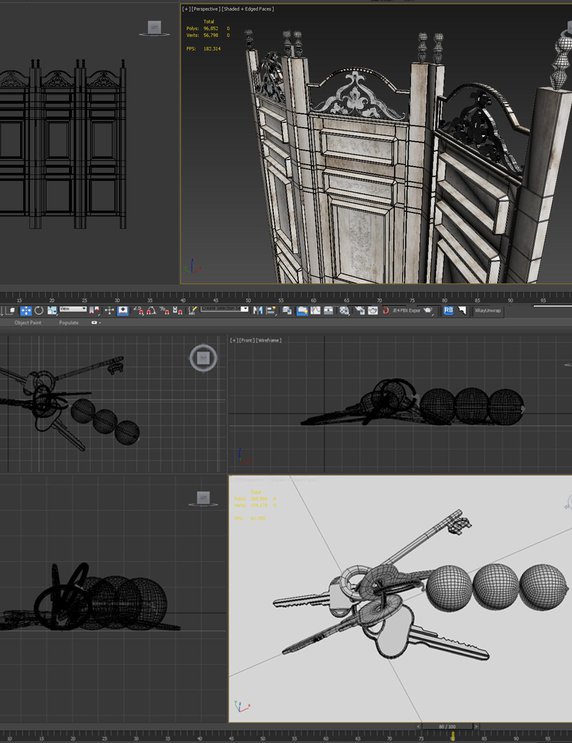 I used Marvelous Designer for creating the cloth simulations and, although I have used this software many times before, making dresses and skirts was a new experience for me. It was really fun but equally challenging because in real life I have no idea how to create clothes, and I'm not even good at sewing. 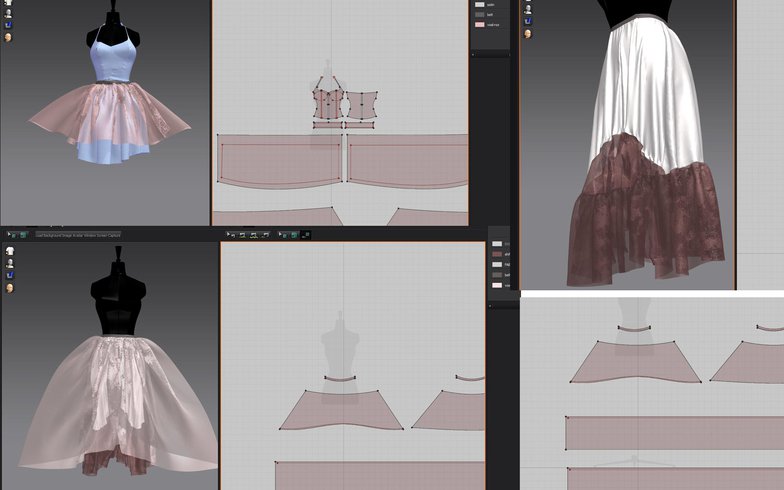 I watched a tutorial on how to make dresses in Marvelous Designer while I was working on them, so not everything went smoothly for the beginning 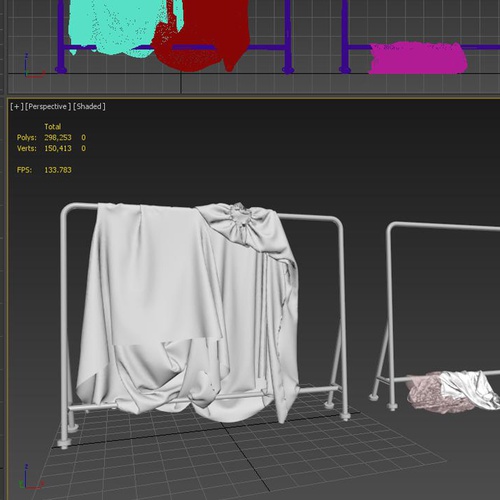 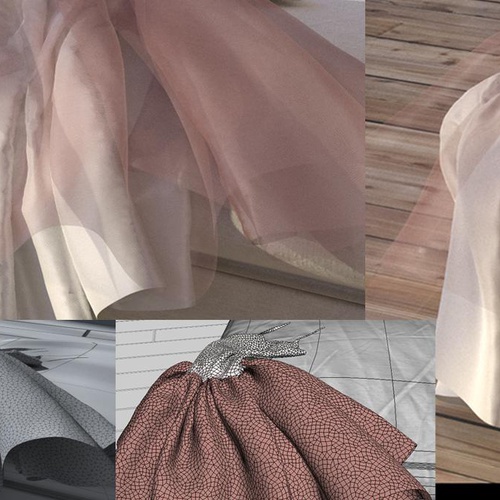 I created the patterns then changed the avatar in Marvelous Designer, and ran the simulation again on different surfaces and objects