Create animated game characters with Reallusion's iClone Character Creator and Animation Pipeline toolsets, with the help of these free assets...

Create animated game characters with Reallusion's iClone Character Creator and Animation Pipeline toolsets, with the help of these free assets...

Create and animate 3D characters for use in Unity3D, Unreal and Autodesk Stingray using the iClone Character Creator and the iClone Animation Pipeline. Whether you are embarking on your first game project or you're a seasoned pro, these tools will help you quickly design and animate custom 3D characters and add rapid game character creation and animation to your game development skills. This tutorial is designed to introduce the game character creation tools in iClone Character Creator and animation with the iClone Animation Pipeline. Finally, export the fully-rigged characters with FBX and get them inside your engine of choice.

Included with this tutorial are 3 free characters in Unity3D format created with the iClone Character Creator. Download the free characters and check out the tips below on how to create and animate your own characters for games.

The free game character models that are offered with this tutorial all began inside the iClone Character Creator as one of the base models. There are options available to select athletic, muscular, stout or average body-styles to get started. Once you have selected a character base you can edit the character using the Morph Gizmo and your mouse to hover over the character and see how the gizmo highlights the bone, muscle or feature. Then click-and-drag to alter the shape and size. Access the complete character morphs and edit with slider controls for detailed adjustments. 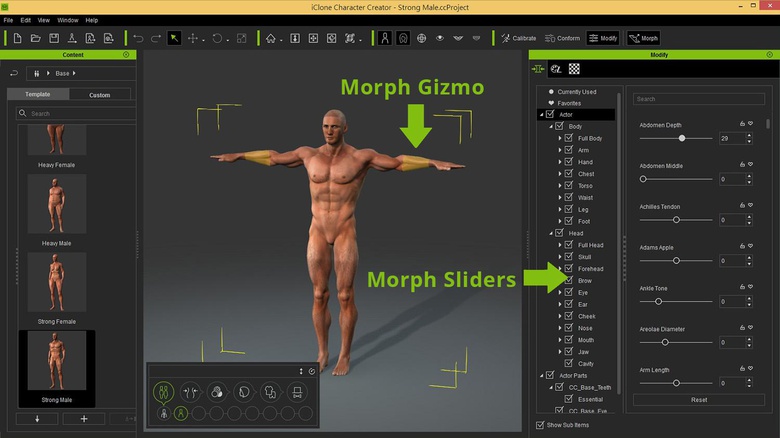 The character face-shaping tools also make use of the Morph Gizmo and the Morph Sliders to edit and design the face. All the faces are rigged and ready for animation. There are base face styles for male and female and also aging tools to range the look from youthful to elderly appearances. The camera tools in the viewport are helpful to change the angle while you design the face and see the effects of editing from multiple angles. Change eyes and teeth to fit your desired style. Save faces and characters to edit further or use with other character creations in the future. 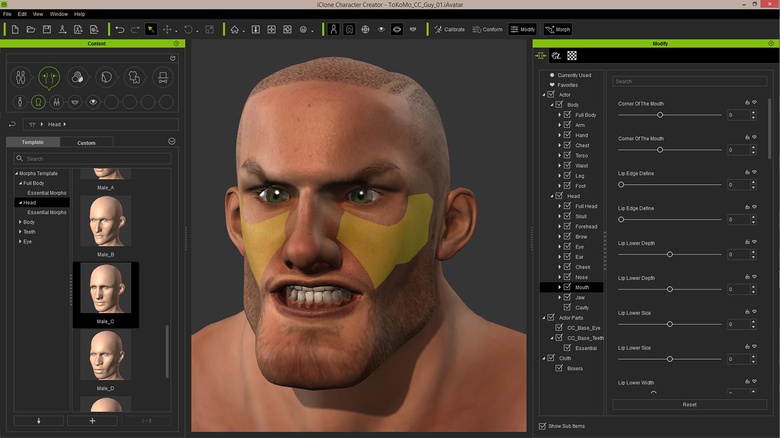 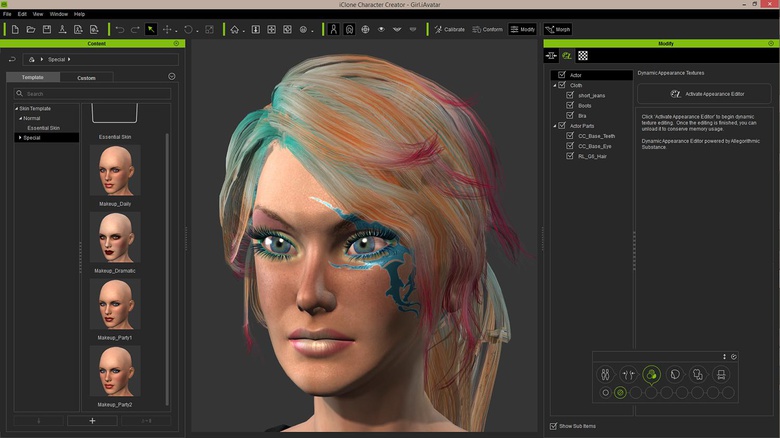 The clothing library provides styles for shirts, pants, shorts, dresses, suits, coats, shoes and more to get started with designing a basic outfit for your game character. Clothing styles are made to fit any character shape with the conforming cloth feature in iClone Character Creator. Select a garment from the library and apply it to your character, after which you may further adjust the fitting using the Conforming Cloth function to fine-tune the outfit and tailor-fit your character. Clothing created in iClone Character Creator can be saved as individual clothing files and used on any character design in the future. 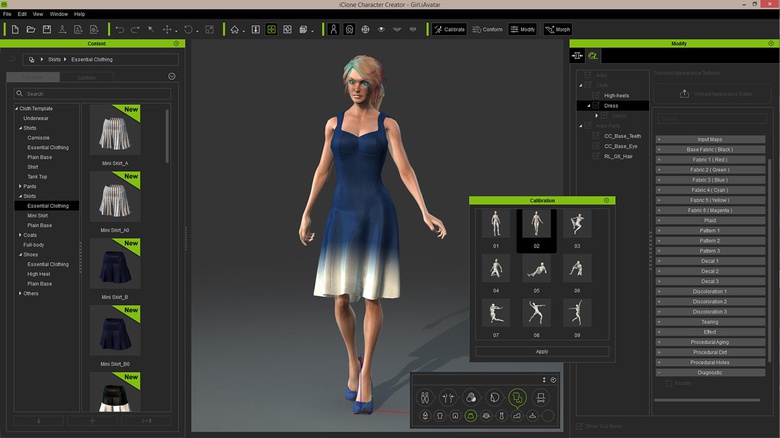 Send your fully-rigged character to iClone and quickly begin animating with the Motion Puppet panel. You will be able to generate most of the common animations needed for game characters including walks, runs, idle motions and more categories like moods and gestures. The Motion Puppet lets you edit the motions before you add them to your character. There are a series of sliders for affecting the motion puppet performance to customize the look of each motion loop. Preview, customize and record motion tracks to the timeline that can be further edited via HumanIK and the motion layer editor to add offset keyframes to any character performance. 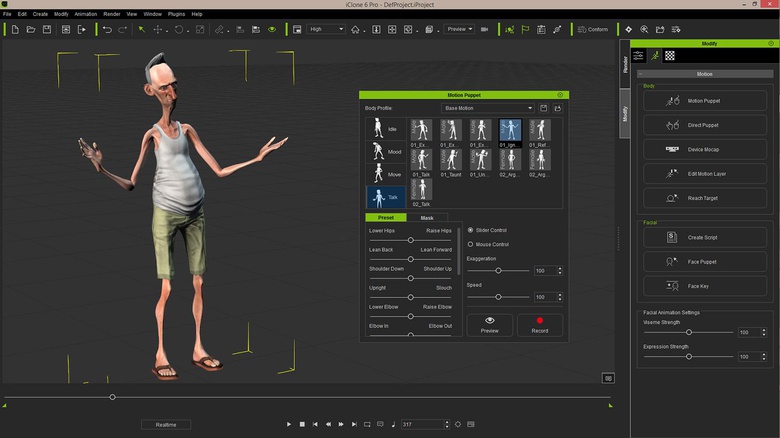 The iClone Animation Pipeline comes with 600 motion files that range from basic human moves to combat and dancing and more. When you apply a motion to a character it is identified on the Timeline with a motion track. You can edit those motions on the timeline by blending them together or breaking the motion and removing parts of the motion. Motions may be aligned together allowing character performances using multiple motion file sources to maintain a smooth performance by aligning the character Root or appropriate body part to create a fluid transition between motions. 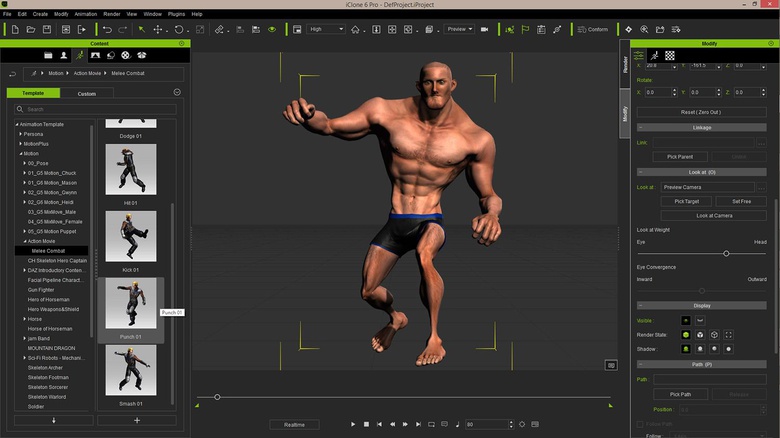 Motion capture on a budget is possible for anyone with access to an Xbox 360 or Xbox One Kinect. The iClone Mocap Plugin that is included with the iClone Animation Pipeline enables motion capture with the Kinect to generate instant animations for your characters. iClone has built-in smoothing on the motions recorded using the Kinect to keep jitter from occurring. Use the standard mode to capture full-body or Near Mode to capture upper torso while seated. Additional trackable skeleton joints enhance neck up/down, upper torso, wrist rotation, and squat movement. The Xbox One Kinect has an advantage with 1080P camera and new TOF (time of flight) sensor that offers unparalleled tracking accuracy. 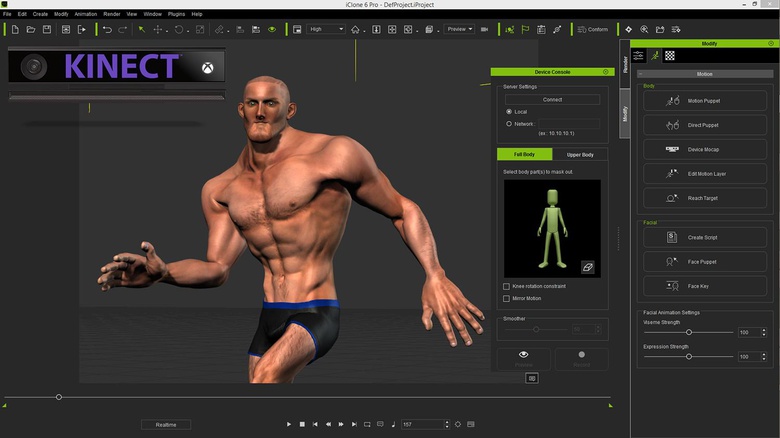 Game characters created with the iClone Character Creator are ready for full facial animation including lip-sync. Generate lip-sync animation by importing or recording audio which iClone will instantly transform into animation with editable lip keyframes to change any aspect of the lip-sync performance. The Lip Editor provides access to edit the viseme and the amount of expression desired for that certain lip keyframe. The Create Script button in the Animation tab will launch the option to create lip-sync by recording audio, import WAV or MP3 or use Text to Speech. The lip-sync animation created with iClone can also be used in your games. 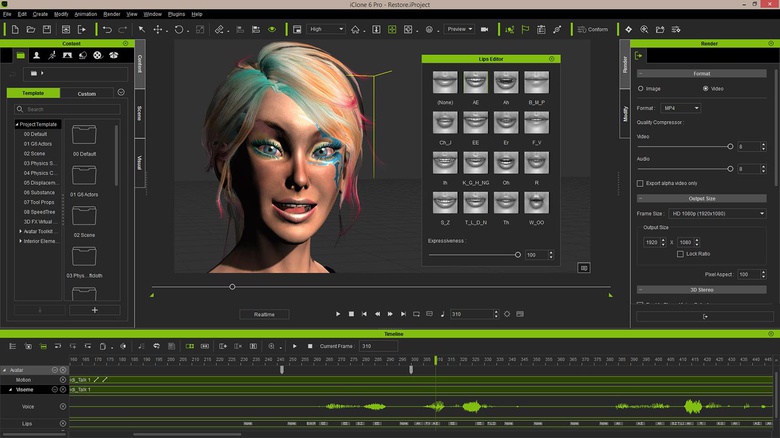 Adding emotion to your character's verbal and non-verbal performances is possible by puppeteering them with the Face Puppet panel. The Face Puppet offers multiple puppet profiles and emotive presets with ability to choose from happy, sad, angry and fearful emotions. Use the Face GUI to select a custom group of features or isolate a single facial feature to puppeteer. The Face Puppet creates animation by using your mouse movements to puppeteer the chosen profile or UI selection to animate. Preview and Record animations to the timeline and automatically blend Face Puppet motions with existing lip-sync to create a full facial animation performance. 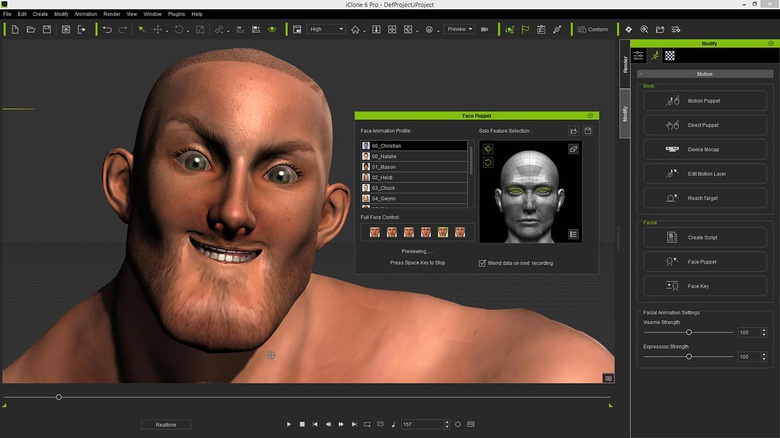 The iClone Animation Pipeline will easily move your character and animation from iClone and into your game engine of choice including Unity3D or Unreal . Characters and animations are collected and sent to 3DXchange where they are exported as optimized FBX files. The FBX exporter window has drop-down options to select the game engine and optimize the export. Import iClone Character Creator characters and animation into games and you'll be able to apply the full onslaught of Unity3D Mecanim and more with a rig that comes ready to play. 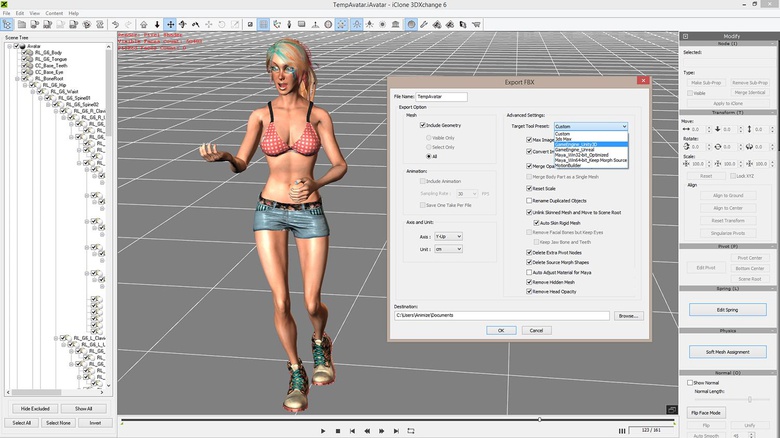