Federico Ferrarese specializes in mecha design and works in the videogame industry as a freelance concept artist. He is also currently working on his personal project /EVO/, which blends together historical and sci-fi imagery.

When I was asked to make this quick tutorial, I thought it would be the perfect opportunity to demonstrate how you can quickly build an effective mecha design. This tutorial will show how I combine traditional and digital techniques, greatly increasing the effectiveness of a traditional sketch with a few simple steps in Adobe Photoshop.

One of your main considerations when creating a concept should be its function, which will considerably influence the design of the subject. It’s essential to give your design a clear and unequivocal function, making it more believable and effective to the viewer.

It’s also important to properly manage the “shape language” and forms of the subject. This is fundamental in order to place your design correctly in its imagined environment. In the case of this tutorial, the concept should feel like it belongs to a medieval society that is technologically advanced, rather than a very futuristic setting.

One method to make a design technologically familiar to us is to use mainly square shapes and surfaces. For this stage of shaping forms and ideas, I use a Pilot Parallel pen, a tool typically used for calligraphy. It’s a fantastic pen for sketching quickly and playing with hard surfaces in an effective and stimulating way. 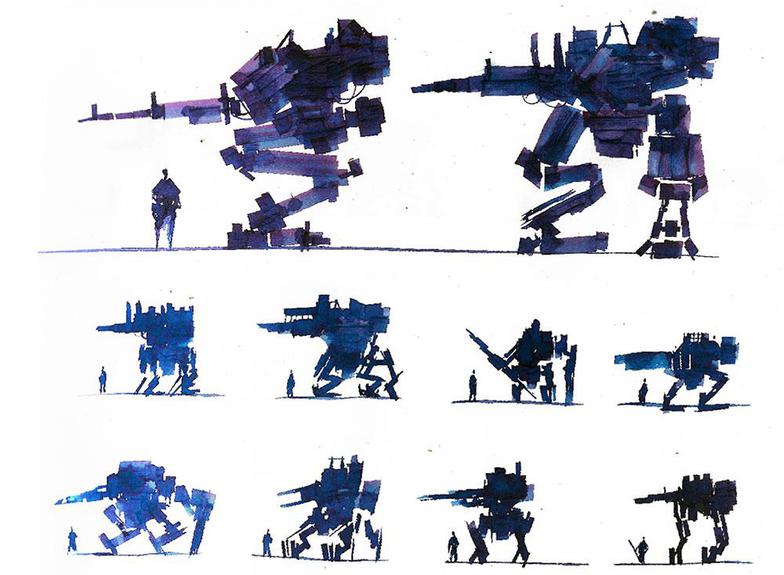 Once you’ve chosen an optimal thumbnail, you can create a preliminary pencil sketch. It is always worth creating a quick perspective grid during this stage, even if the sketch is drawn freehand. This ensures a more solid sense of perspective, while wasting no time on complicated construction grids, which are likely to slow down the process of sketching.

For quicker work like this, it’s more important to stay focused on identifying the most effective design for the proposed purpose.

I also recommend using a cyan pencil when sketching the construction lines and blocking out the main volumes of the subject. This will allow us to draw in pencil later without being distracted by the construction likes, making the work process less confusing. 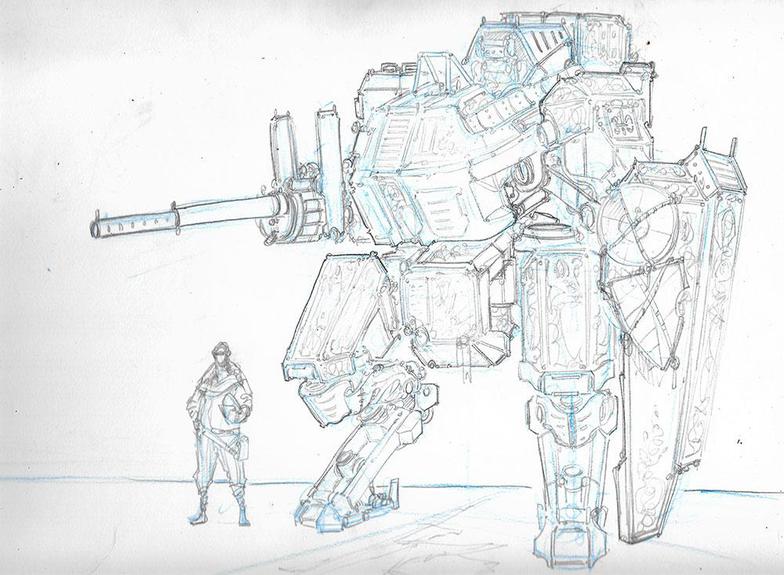 When the pencil sketch is finished, it’s time to move on to some quick inking. To ensure that the concept is legibile, it’s key to manage the line hierarchy correctly. You should start by identifying the main forms that make up the subject, and applying a thicker, stronger outline to them than you’ll use for the smaller details.

For this stage, I like to work with disposable synthetic Rapidograph pens, due to their lower cost and the greater flexibility of strokes offered by their soft tips. 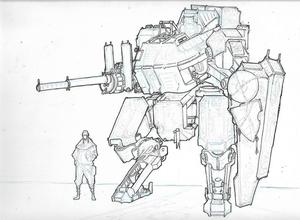 Now the time has come for inking the details and finalizing the traditional half of this process. Using a smaller Rapidograph pen than the previous step, I start to add details to the concept.

To avoid excessive definition, which can compromise the readability of your work, you can use a few gimmicks. For example, if I want to suggest engravings or reliefs, I use a casual squiggled line to indicate the detail without overly defining it.

It’s often a good idea to add signs of use, such as damage and dirt, to give a more plausible and lived-in look to the subject. 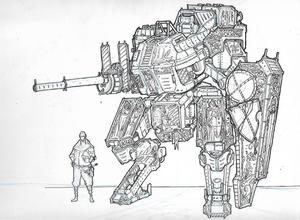 Inking the details with a finer pen

Once the traditional part of the work is completed, it's time to switch to Photoshop to quickly finalize the concept. To add a further historical look to the design, I add an antique paper texture as a base, then turn down the saturation of the texture slightly for readability.

I then adjust the hue and tone of the lines, changing the black to a reddish color reminiscent of antique ink, like the ink used in ancient documents such as Leonardo da Vinci’s notebooks. 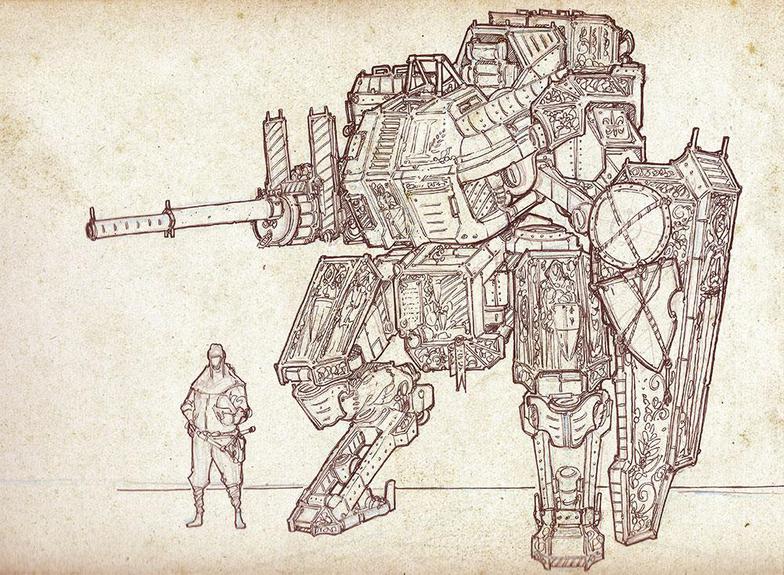 Under the Layer Properties menu, I set the drawing to Multiply mode in order to work without covering up the next steps. This will help to retain the traditional drawing as a dominant part of the final artwork.

I add a flat base underneath the drawing, then apply a simple Multiply gradient that gives a hint of light without getting bogged down in complex lighting. As in the previous step, I adjust the tonal values in order to standardize the colors.

Next, insert a spot seat by placing it under the level of traditional design and a simple gradient in multiply to give a slight hint of light without getting bogged down in complex lighting that would slow down the workflow. 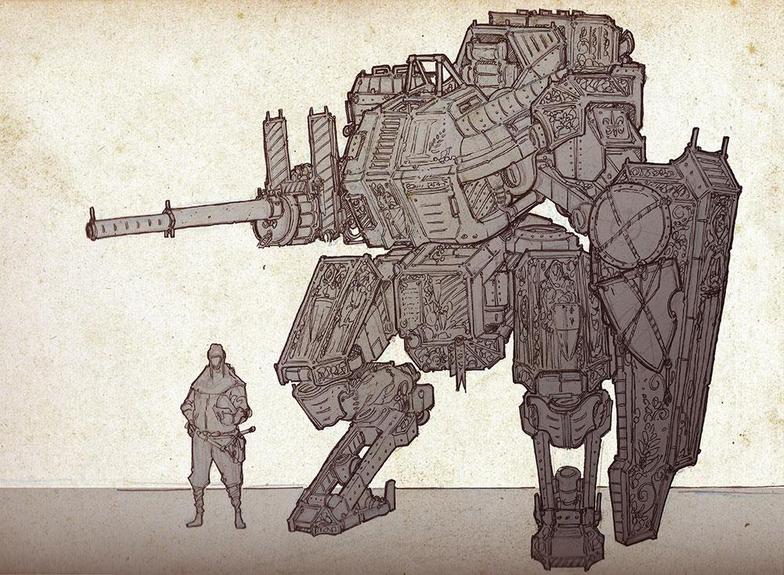 Given the large amount of surfaces and elements typical of a mecha design, it’s good to separate the elements of concept to ensure they are all readable.

To do this, I add shading on Multiply layers, with varying levels of opacity and different shades of gray. These simple fills help to separate elements of the design, such as the internal and mechanical components.

It only takes a few levels of shading to considerably increase the quality of the concept’s presentation. As before, I adjust the hues and tones of the layers to maintain a reddish color. 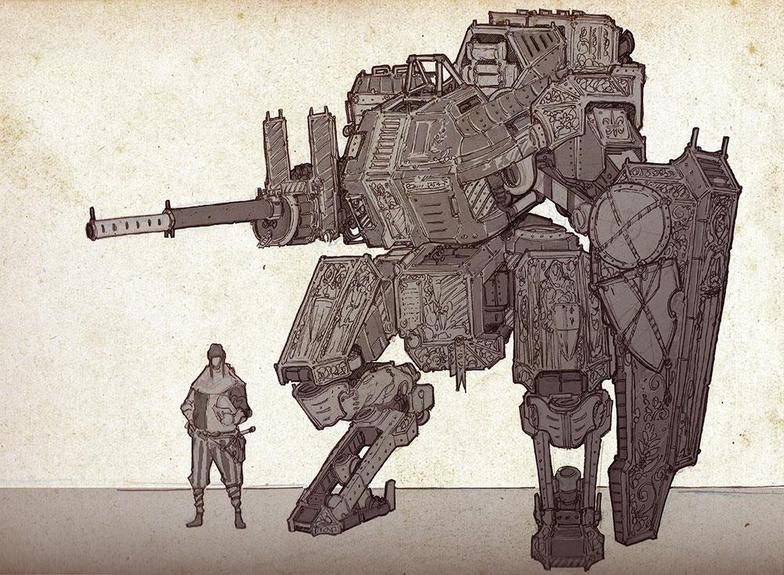 Now we’ve come to the final part of the work. I create a new layer, set it to Overlay mode, and highlight some small details with a very light color (almost pure white). On another layer, also in Overlay mode, I add a simple gradient on the opposite side to the shadow gradient created previously.

When the concept is complete, I like to flatten the image, duplicate it, and set the duplicate layer’s mode to Overlay. I set the opacity of this layer to a very low value, usually 15–25%, to further enhance the contrast and values of the final image. 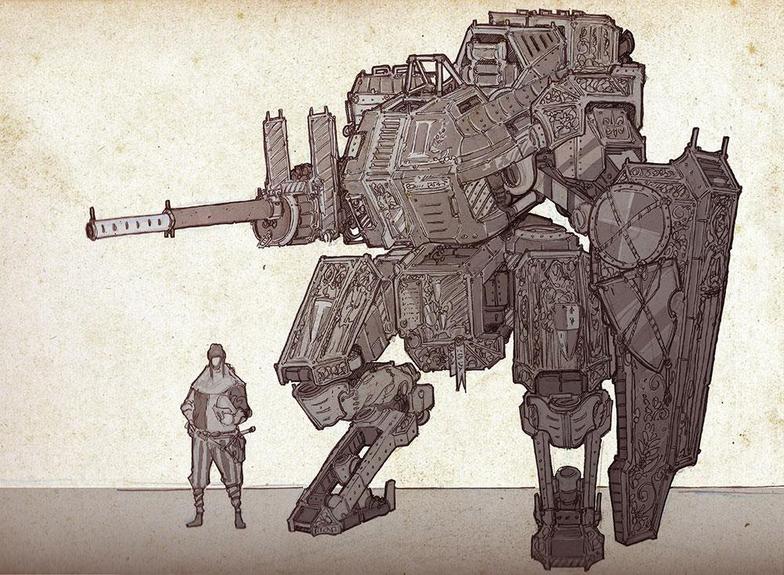 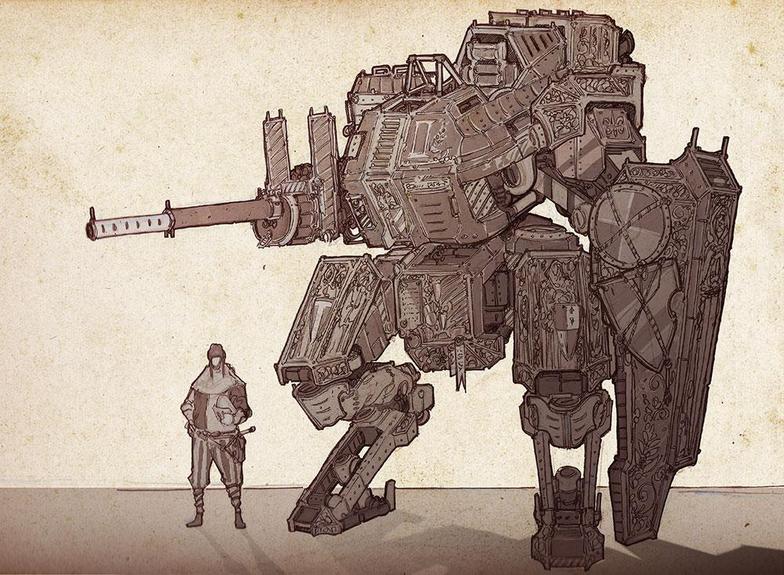