Hi, my name is Marek. I work as an illustrator and background artist. Painting sky scenery and dramatic clouds is an important part of my job. I wrote this tutorial to share my skills in this particular area of painting. The creation of nice and realistic clouds is actually not too demanding on time or technology. In spite of this I had been painting clouds in a particular method, which had not been generating satisfying results for many years. The main reason for this was because I wanted to paint everything with one brush, soft or hard. I really didn't like clouds painted in this way. Recently I decided to change the way I do things. It resulted in finding out a method which allows me to paint very realistic sky scenery. First of all I'll explain the basic principle of painting clouds. I use two types of brushes. First one is soft with smooth transition, the second with harder edge. It's because when you take a look at the cloud, you'll find out that its kind of a strange blend of smooth transitions in one hand and sharp contrasts with hard and bright outlines on the other. In the next few pictures I'll show you how to perfect the illusion of marvellous fluffy cumulus clouds.

This image presents the cloud painted with soft brush. It reminds me the cloud in general way, but on the first view you can feel, that its not quite there yet. 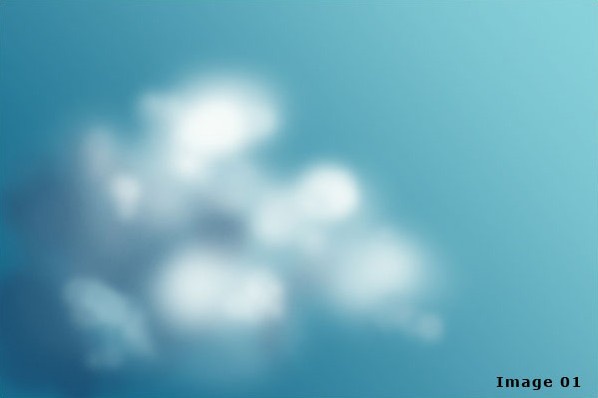 I have switched from soft brush to harder and adumbrated the edges of cloud lightened up by sun. But there are still hard outlines on the shadowed side of cloud. We can solve this problem by switching to soft brush and creating smooth transitions. 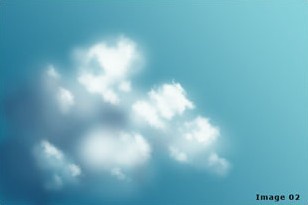 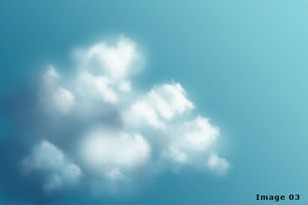 Now we need to get rid of this big white stuff in the middle of the cloud. It looks little bit useless, and besides that, its situated in the area which needs to be slightly shadowed. We'll also make the dark parts of the clouds on the left stronger. 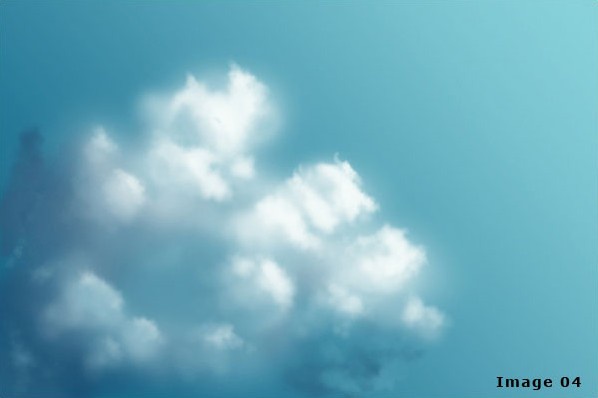 These kind of clouds can be created when the Observer, Cloud and the Sun are in the same position, as you can see in the images below. 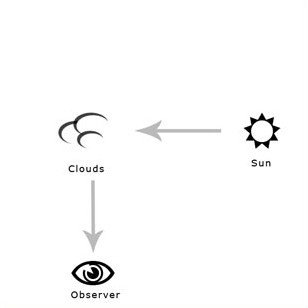 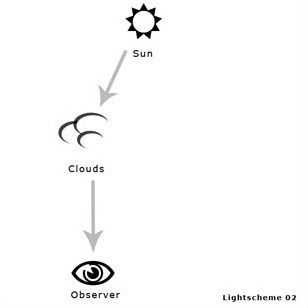 If we want to select the different lighting (for example the same as on the above image, where the cloud is almost between the sun and the observer), we need to proceed in the same way, as what has been shown on the image below. The bigger part of the same cloud, which was the subject of our effort, will stay in shadow on our side of view. So we will paint over it by using dark colours and only let the edges shine, which are lightened up from the sunny side. 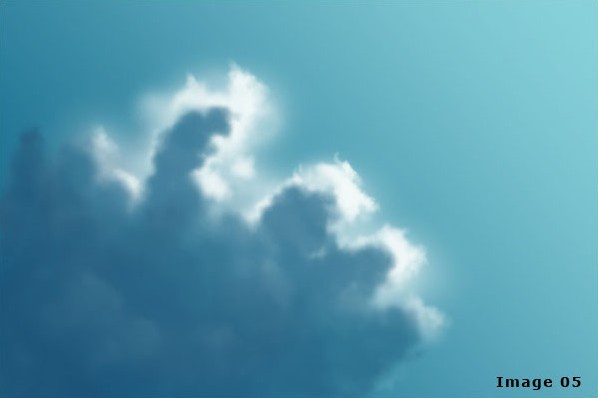 We then add some details and lighten parts of the cloud, which are probably not sufficiently thick enough to create the deepest shadow. And that's how you paint basic clouds. 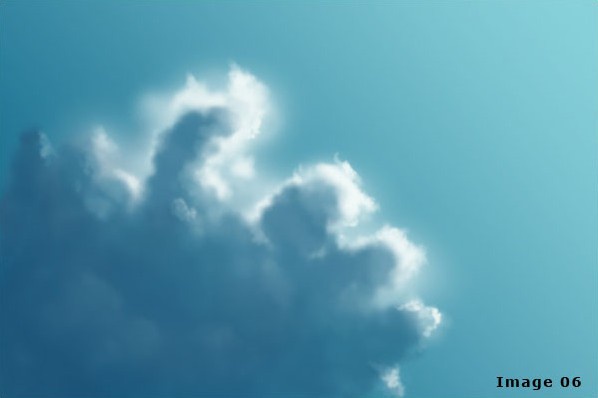 Creation of these clouds takes me about 10 minutes and I've used just two brushes. One plain soft brush with Scattering function, and the second one - harder brush, which reminds me of smoke or the little cloud. You just need to set up the plain soft round brush as a masking brush in the Dual brush menu. It's fully sufficient not to create a repetitive pattern when using the brush. When you learned these techniques, you can try to paint more challenging sceneries. 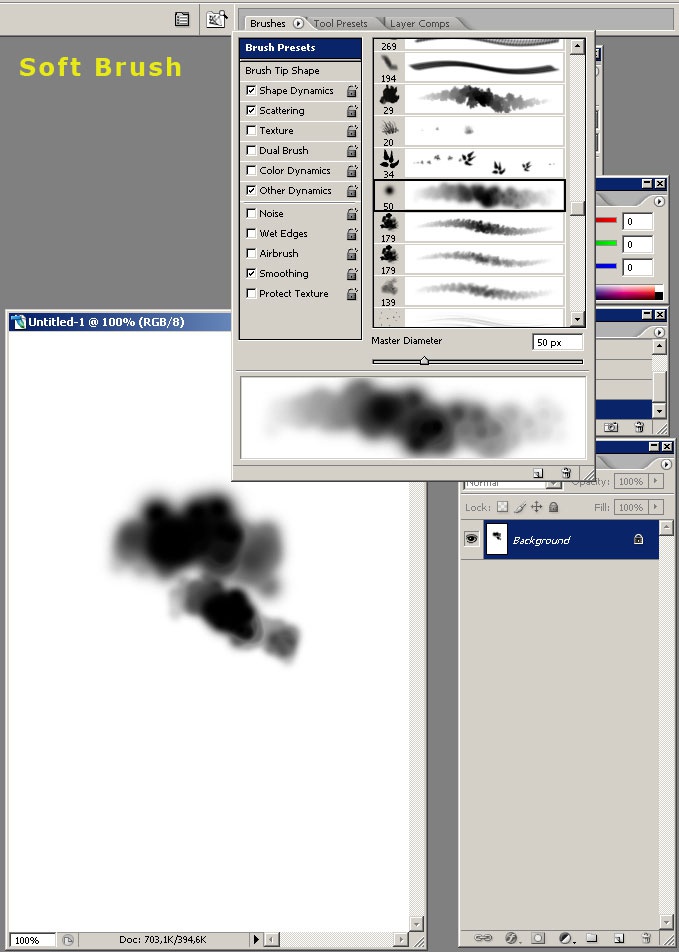 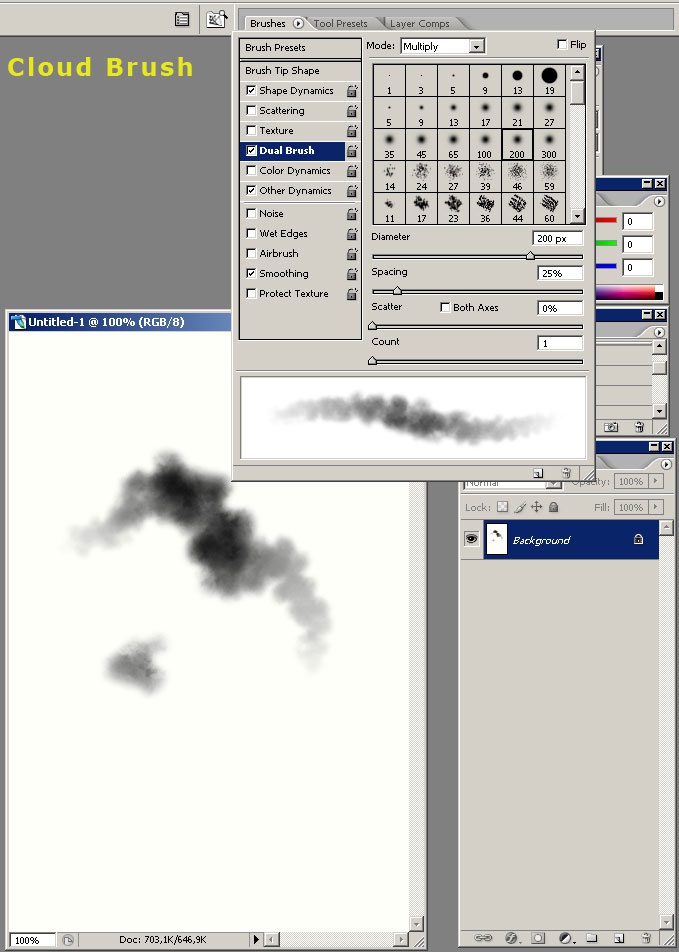 First of all we need references. I have found several photos of clouds, taken from high altitude (probably from an aeroplane window) on the Internet. Everyone who has flown sometime had surely seen a view like these. I've picked certain clouds which are lightened by bright white light, approximately in the afternoon. This are the proper conditions I need to create my picture. 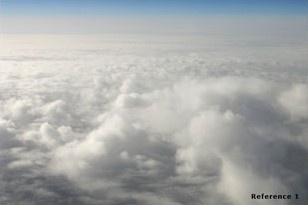 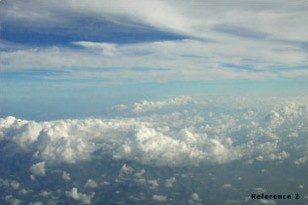 I have laid out a basic structure and some shapes. On the left side of the picture I'd like to have a big bunch of clouds, in the middle and on the right will be the clouds will be a little more scattered, extending towards the distant horizon.

I adjusted the contrast and saturation of the picture. Then I have created the basic effect of Cumulous formations raising up from the normal height of the clouds. Compact clouds are used to create towers and hills of clouds rising up by airflows. You need to realize that all of the clouds create shadows behind and underneath them, so you'll need to sketch that in.

I have added more contrast and saturation again. The basic mass of clouds starts to look like what I had in mind.

It's time to give the scenery depth and space feeling. I have concentrated on the clouds in the distance and added some breaches in the basic level of clouds. Airflows create not just towers and hills, but also some breaches and abysses. I have painted them by using a rich blue colour, so that it could look like there's an ocean under the clouds. I have lowered the opacity of the layer with details in the back. It's because I wanted to simulate this misty atmospheric effect (haze), which usually appears looking over vast distances.

I have added some more detail to the clouds in the front, without this they would look like they would be closer- and I did not want this. I want the observer to have the feeling that he or she is very high above the huge mass of clouds.

To polish off my work I have tuned up the saturation of the cloud-shadows in the front and gave them slight tone of yellow-green colour. Thanks to that, they do not look so monochromatic.

When I showed the finished picture to my girlfriend, she was able to tell me a very unbiased opinion. When you work on something long enough, you sometimes become blind to some of the errors that may lie within it. Having a person who hasn't been staring at the work as long as I have and telling me that it looks good must mean that my work on the background is definitely finished. The clouds look really spectacular and the viewer has the feeling of flight above the vast space. That's exactly what I was aiming for in this picture, and it only took me about 2 - 3 hours.