Arch-viz expert Mohsen Hashemi takes a closer look at cinematic approaches to light & color, showing how they can be applied to your own artwork…

Now that we know many things about light and color (see previous article) and their huge role in interior design and archviz, we want to take a look at how these two factors can affect a cinematic approach. To be honest it’s impossible to be an artist and not look forward to making some personal projects that are cinematic.

Colors and lights are two vital factors in a filmmaker’s toolkit. As you can see, we can use them to show a specific mood and emotion, or sometimes it’s a way to tell the audience when this scene is set, or how a filmmaker is trying to transfer information or a message. Also, it can be how we can know and understand the story about a character. Moreover, we can use them with different techniques, like using them in props, customs, or settings. And choosing the best light to balance the scene as we want, or choosing the best color grading in the editing step.

There are so many examples about how and why directors use specific colors in their movies. In the Village movie (2004, directed by M. Night Shyamalan) the color Red is a sign of horror and panic when the color Yellow is a symbol of brevity. The “Red” color in the Submarine movie (2010, directed by Richard Ayoade) is a symbol of passion.

To begin, I will point at some definitions about colors and lights, the rules of framing, different characteristics, and psychologies of the color. And then we will take a look around some examples in the 3D software.

In the beginning it’s important to remember; following the rules is so much more important than guessing the principles. I am always a big fan of changing the rules but initially we should have a correct perspective about the rules. So let’s see how one of the basic rules will help us to understand the workflow better.

The rule of value in contrast, color, and how different values can help us to understand depth. When we look at an image, which can be created from a scene of a movie or advertising image of a game, we can see these factors.

If you take a look at a long shot image, like that provided as an example, you can see three main parts; foreground, middle ground, and background which I have already shown with zone 1, 2, and 3. Now it’s important to note these factors such as contrast, color, and amount of haze, and how it changes in different zone. So the more we move from the foreground to the background, the value of the contrast will change and become less and less.

Also you can see the value of the color becomes more washed out during this process, and the amount of haze becomes more and more, so it seems the more we go to the background the more haze will appear. So, no matter if we are working on a 3D image with 3D software, or we are drawing with digital paint, or even if we are drawing with pencil on a paper, this rule is the same for any workflow. Also, we always need a guideline to help the eye to see the whole image. Here I used one-point perspective while there are so many techniques like the rule of third, compound curve, and three-spot. 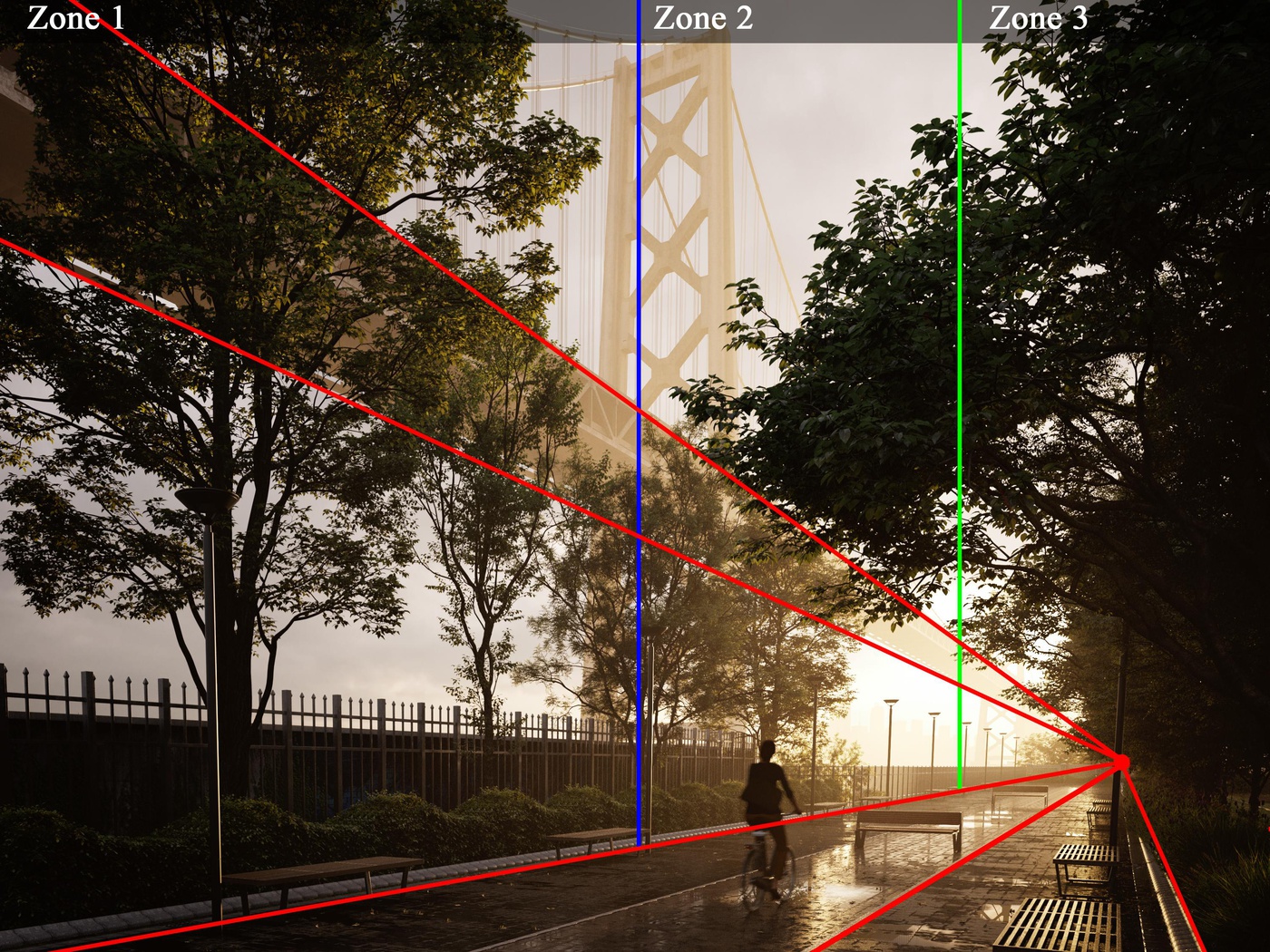 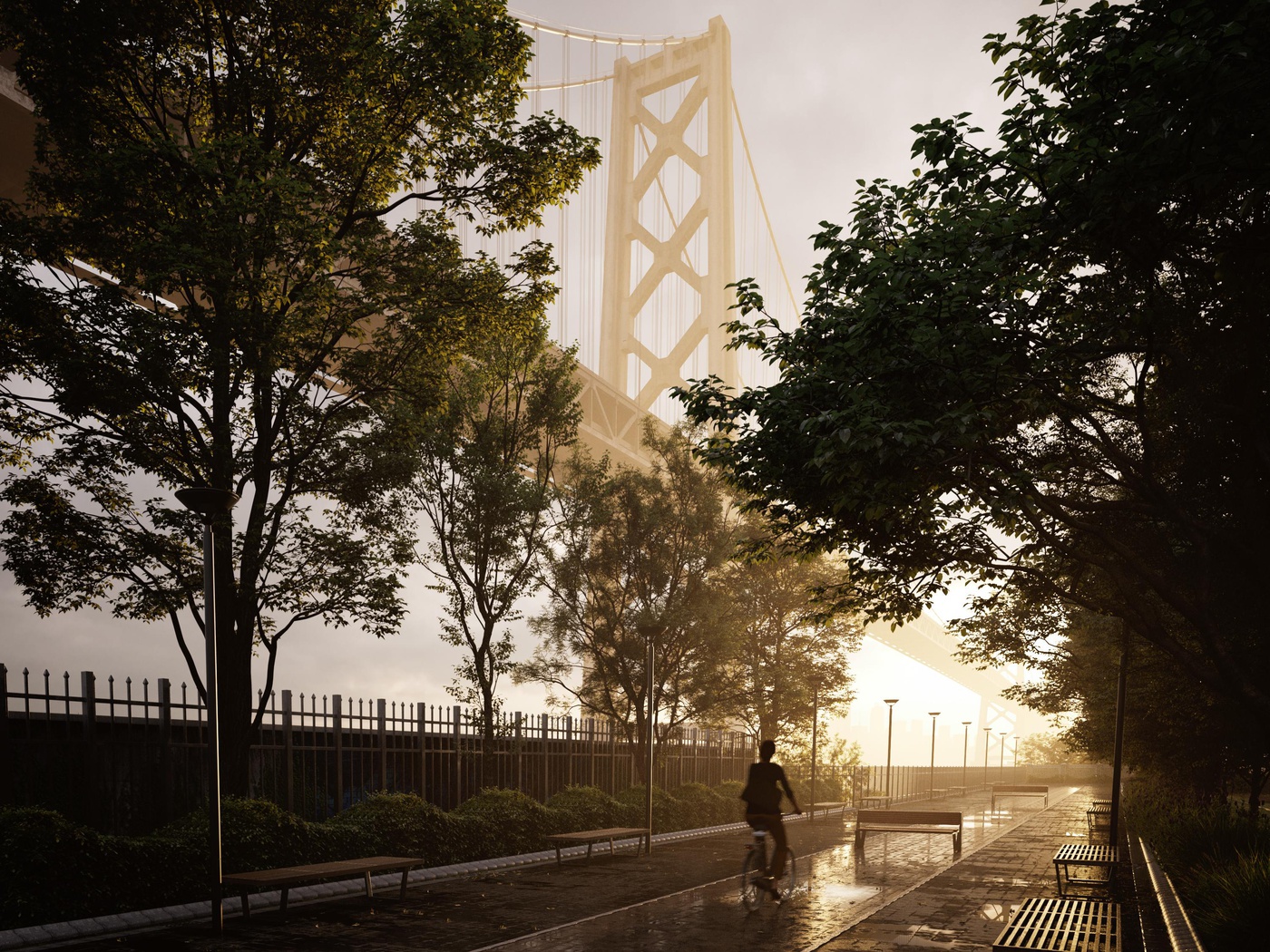 Based on the psychology of color I will elaborate upon some colors and the characteristics of them.

It all depends on how we choose a color and how we follow a scenario that can tell a story, and because we mostly work on still frames, we should be more careful and also accurately choose the colors if we want the viewer understand the story.

Light is the second part of the story which can help a lot during this process to emphasize the mood and atmosphere of the image. It can highlight and define certain objects and characters to code a story. Also, different types of lighting can show specific moods and atmosphere and can create different effects.

Also beside the academic definitions of lights, we have lighting techniques which are ways of using lights to tell stories.

Usually in this approach you will have all the factors, in a wide shot you can see all the values, guidelines, depth, and so on. Of course, for all the examples I considered the same scene only to show how different types of light and color can change the story, and the second reason is the matter of time.

As an example you can see an image with pure white ambient light which can be a symbol of goodness or pure love, when a happy couple are going through the golden light it can show their future is life and an old man who is watching this and enjoying it because its reminding him of his past with his wife, who is not alive anymore, and he still comes to the same park, but alone.

Back lighting is a way of lighting which can show intense effects like power, moody, simplification, and emotion – the emotion itself can be divided into different parts.

As you can see in the image it shows a pure love between a father and son, which can also be a symbol of hope, joy, and happiness which is all influenced by the red and warm light in the sunset. You can imagine how intense the red light is helping the story to move forward.

This method brings us some kind of melancholia; a sad, somber, and strange mood. Simply, we know it as overcast or something, for which the most important characteristic is the absence of saturation in objects in the scene, which can be a symbol of sadness, and we can add some other mood by adding a touch of the light for telling more stories.

Here we can see in the image, it’s obvious he is done. Based on the gun his enemies are carrying, it’s going to show this will be his last sunset, and he prefers to enjoy it as much as possible. (Smoking a cigarette, looking to the sun.) The purple light made the story more mysterious because he is too calm for a dead guy, or maybe he already knew they were coming and he has some other plans.

As you can understand from the name, it’s the kind of lighting that can bring life into an image. Usually you can see some higher key lights and mostly flat tones in the middle, making everything look normal with high saturation, because of direct lights.

As you can see in this image, the combination of the colors, yellow and green, and direct light, are about very nice, sunny days, with life. The happiness of the people, walking, riding bikes, parents playing with children, and so on, all depict a live image. Mostly high saturated colors are the reason for using direct light.

It’s the style of lighting which should be extremely mysterious because of its atmosphere, even if there could be some hope, you can’t guess what’s going to happen, and sometimes we are not going to reveal the whole story.

As you can see in the image, the combination of different shades of light brings doubt around the story – we can guess; are the robots from that planet behind the bridge? What is going on? Do they have a plan to settle on the earth? Will it be scary? Is a war on the way?

The idea of using the spot lights is to show some specific subject, it can be an object or human. So, with this method we are going to focus, and concentrate on something

All you need to see in a romantic image exists here; a very warm atmosphere after a rain, two college students trying to be romantic, and shadow and highlights which bring more excitement and joy into the image. Here we can also see the yellow-orange color as a symbol of trust and safety.

It’s the experience of creating a scary or unfamiliar mood, in a dark place, if you put a spotlight beneath your face it will light you up in a scary way, so that can be the same in our lighting approach here.

And finally I just tried to follow a movie mood as inspiration for an image to see how references will work during this workflow, so I chose the strange sci-fi mood from “Blade Runner 2049” and tried to recreate the same lighting.

As you can see I tried to develop away from a very dry story and tried to add a bit of fun into the story. So, you see even the aliens think this planet is not a good place for living, and after they experienced living with humans they found planet earth sucks, and they are about living, so they take a Mac to see how they can find out more about humans.