Christmas in Alsace - Making Of - Part 2

Christmas in Alsace 2015 is the fourth film of a series of promotional short films inviting viewers to spend end year's holidays in Alsace. It's a collaboration between Gaylor Morestin (artistic support), Thery Ehrlich (music) and me. The project consists of a poster and 2 films: a 2min50 length version and a 32 seconds long trailer displayed in Paris theatres between October 15th and 25th 2015. This year's theme was "Christmas tree and its ornaments". In the first part of this making of I'll come back to the Genesis of the project, storyboard, design, and modeling.

This is the step I enjoyed working on the most in this project. Apart from a few bitmaps, the Christmas baubles textures are fully procedurally generated with the help of a composite material using 3ds Max maps: Ramp, Checker, Tiles, etc. This way, lots of materials could be created and modified in a matter of minutes. The white plastic brackets are made from a blend from procedural and normal bump to handle the deformation of thin parts of the object. 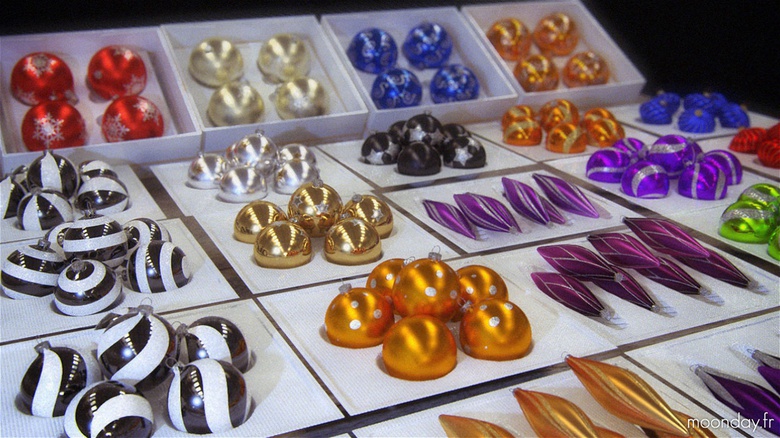 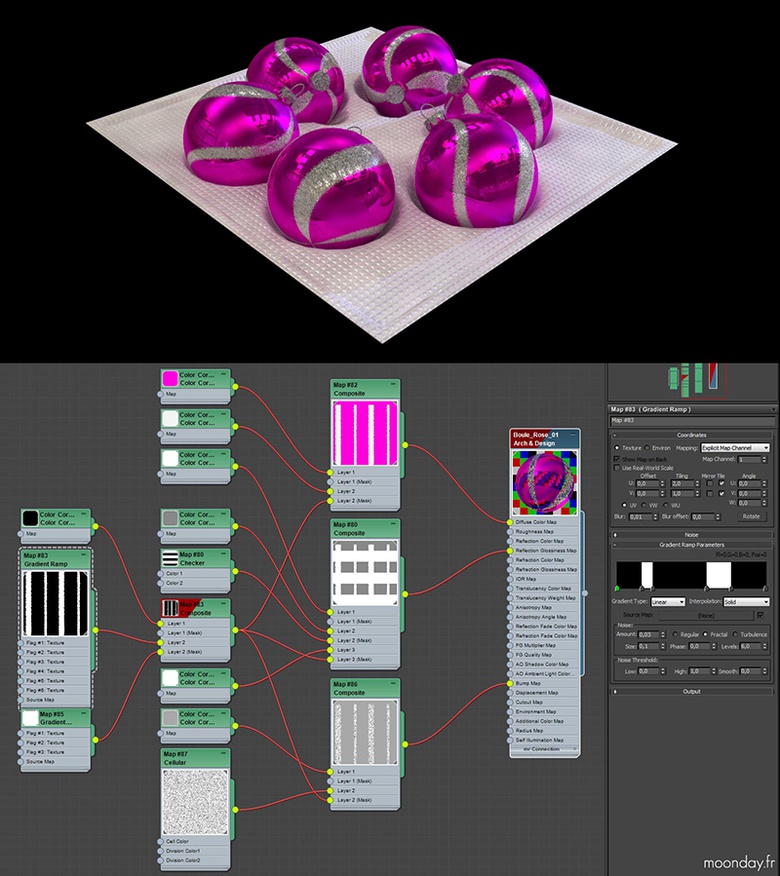 An example of bauble shader 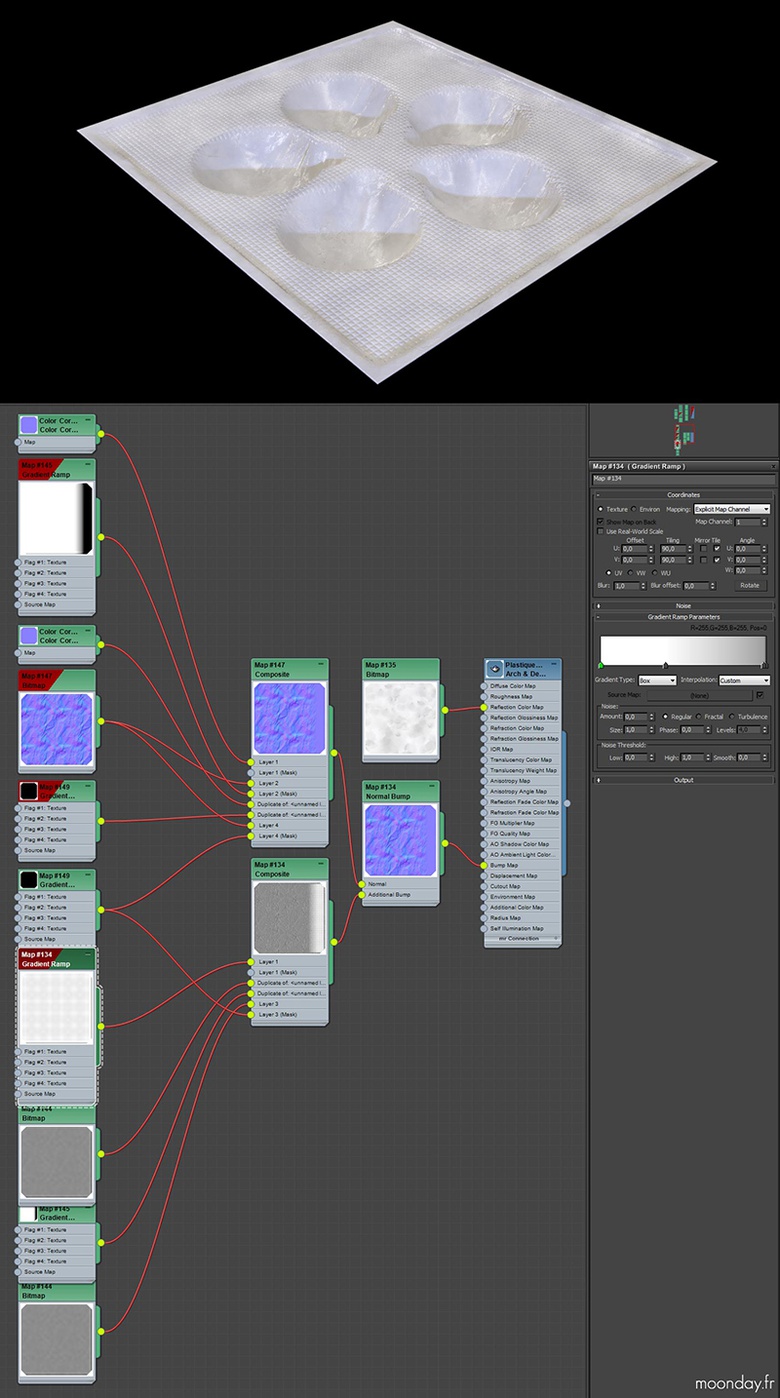 With so many elements to texture, I had to create some tileable texture pack used on almost every object: grunge, finger prints, dirt, scratches, etc. Some came from pictures processed in Bitmap2Material to extract displacement and normal bump information. By placing a light close and a camera at 90° from the subject, a more or less creased fabric, the "slope based" option from B2M computed believable displacements. Not 100% accurate but it saved valuable time compared to the Normal Map photography method.

Finger print and scratch textures were used the most to control all the surfaces glossy and bump aspects. As there were many simple geometry elements, unwrapping was not needed, a simple UVW box mapping was enough to quickly texture meshes like on wood furniture. 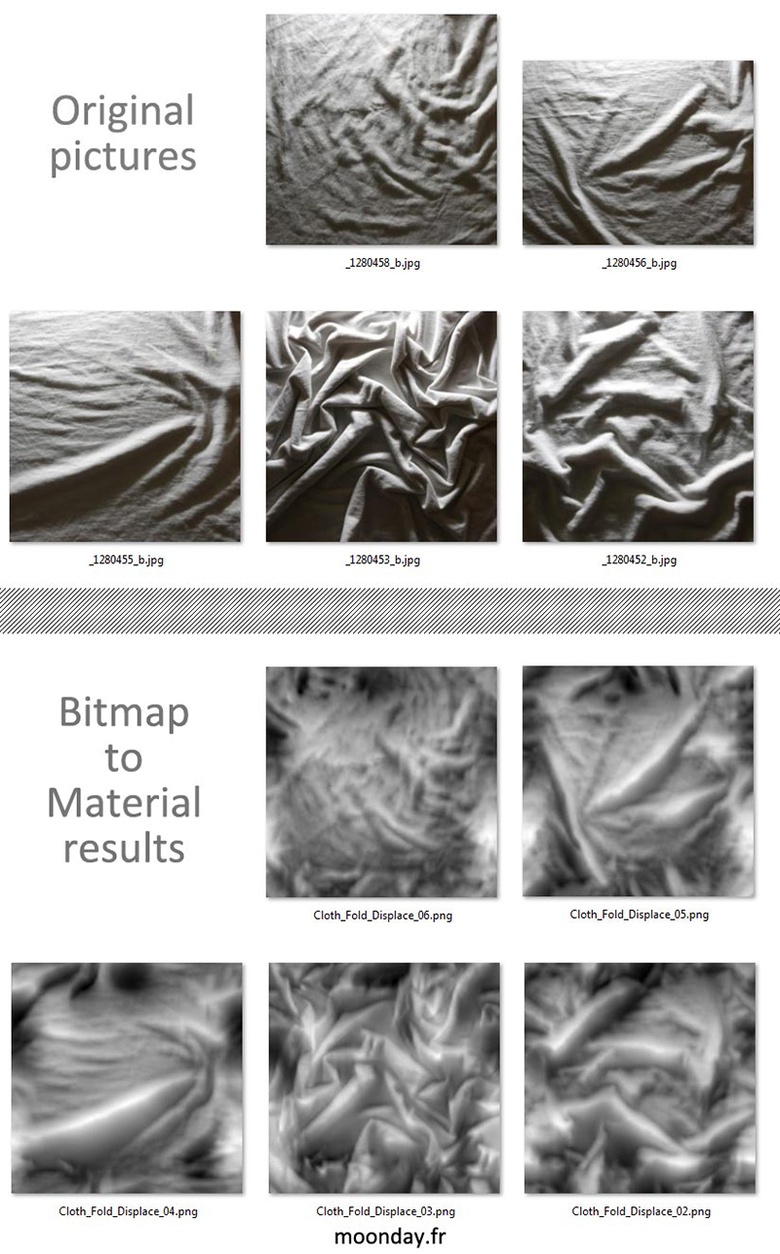 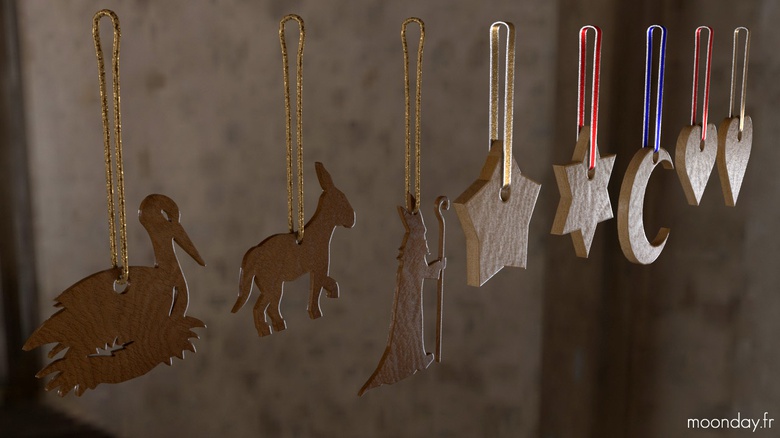 The magic of box mapping on boxy objects 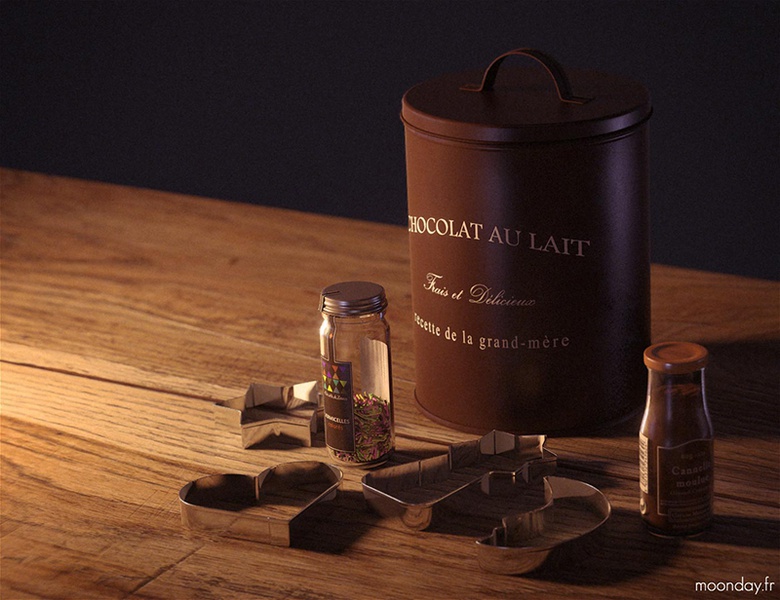 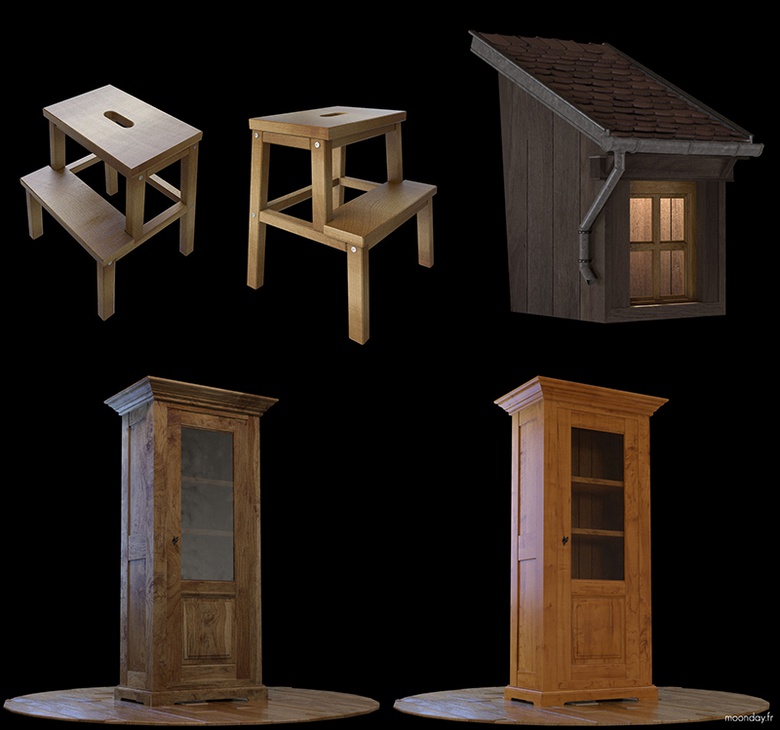 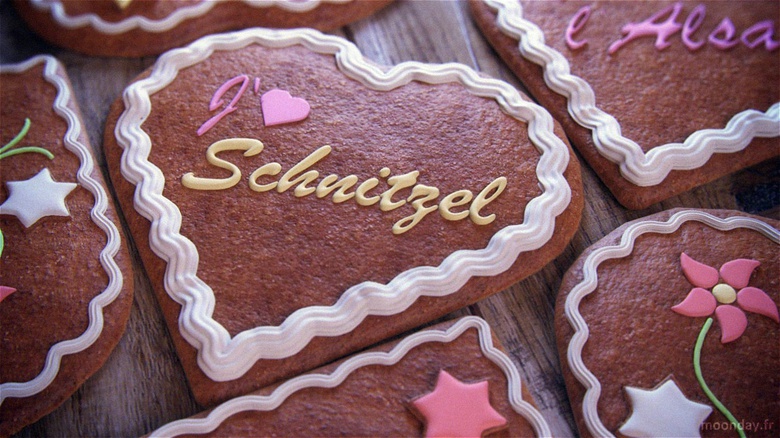 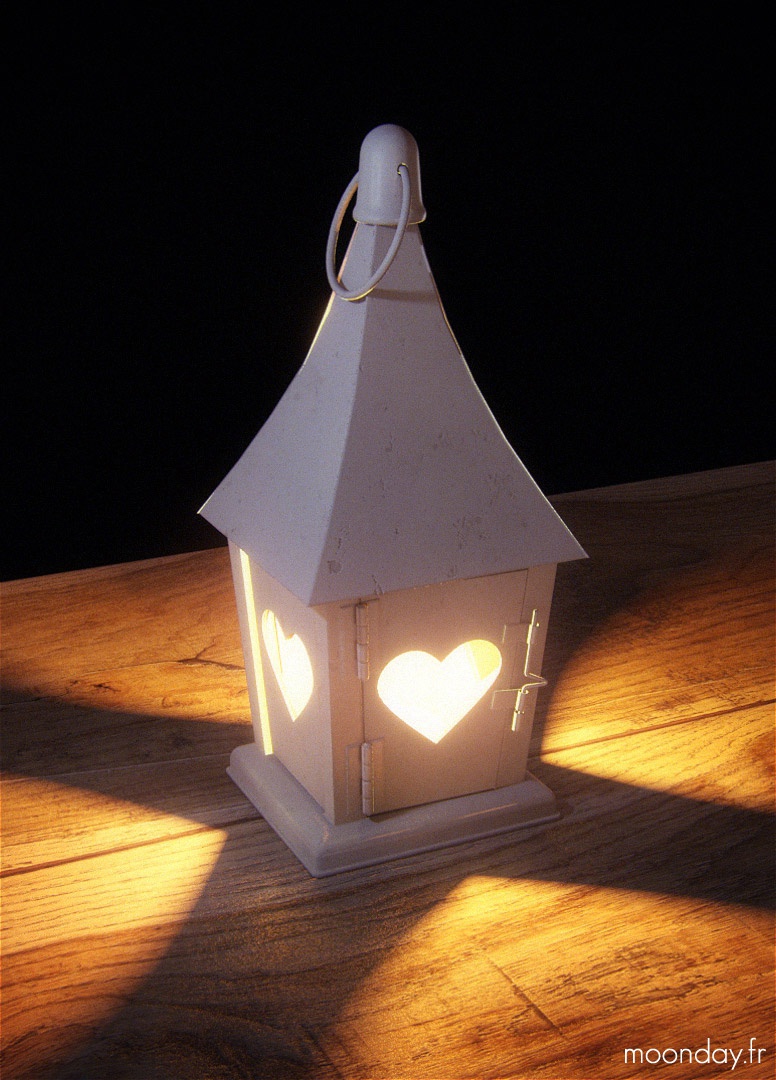 Adding details in texturing process is my thing now. Lazy Nezumi allowed me to quickly draw fabric seams – such as on Julia's hat – using constraints like "sine" to create wide triangular seams. This step can be repeated to create vector shapes used as path to scatter custom brushes. Of course this can be done inside ZBrush, but after all these years I still don't feel comfortable using ZBrush for such detail creation. I feel there is more control making tiny details in a 2D image editing program.

For making the hair, I used the workflow established on earlier episodes, updating some processes.

Before jumping in to pure hair creation, I took some time to think about the many designs of Julia's hair. I 2D painted different hair styles over a WIP of her head, based on Japanese stylised haircuts drawn by Ilya Kuvshinov. FurGuides Painter has been my best friend on this project.

Guides have been painted over temporary hair sculpts or directly on head skulls, then for Julia and Mom Bredeles, I added Hair Farm modifiers: wisps and frizz etc. to create the main hair volume.

Using the paint hair sculpt model method, I faced a problem; the first vertex of each guide didn't touch the skull, instead of manually moving each one, I asked GJ if he had a solution and he came back to me with Hair², a maxscript fixing the issue.

On the brother model I chose a different approach. After guide creation, I added a Hair&Fur; modifier to generate more guides between the original guides from FurGuides Painter, this method creates flat strands of hair; then I add Hair Farm modifiers. By creating hair following this method it simplified and optimized the animation and simulation processes. 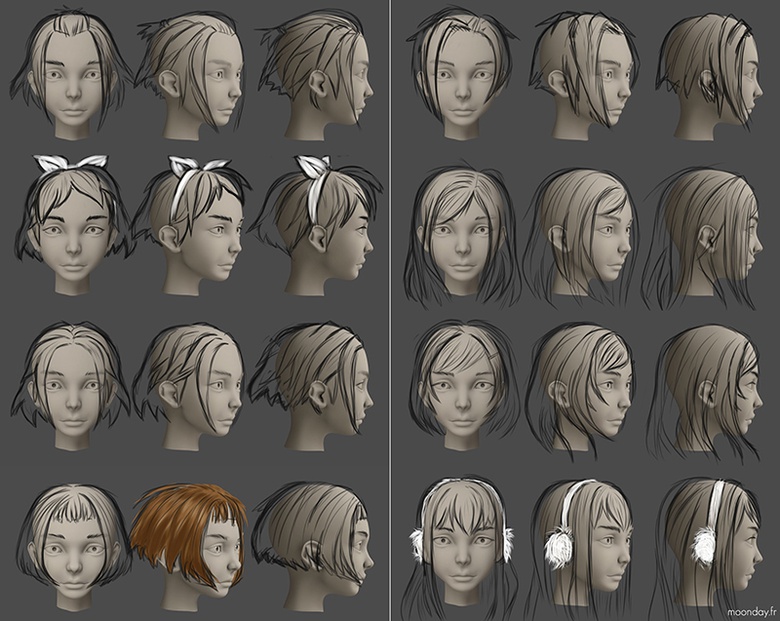 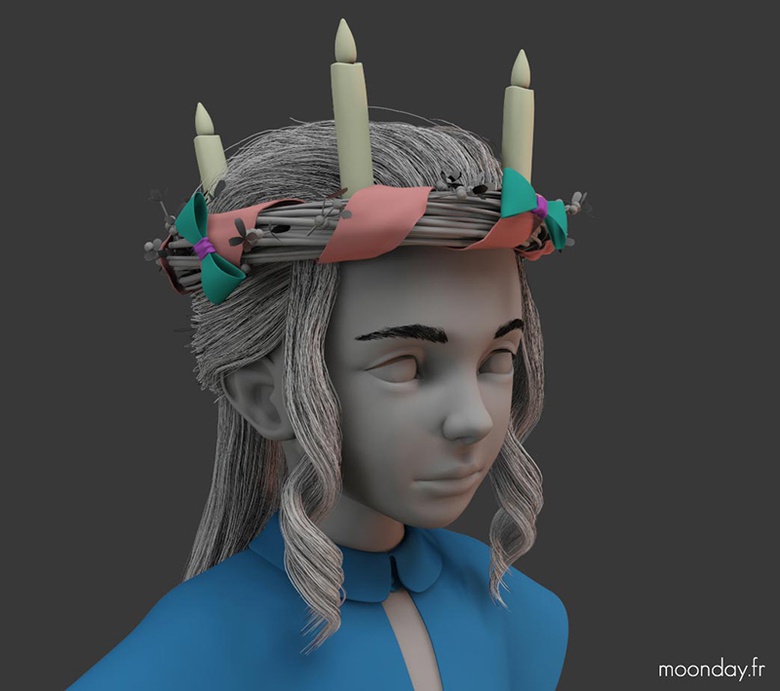 For 2015 episode I decided to put mocap a few feet away and go back to keyframe animation as I want to improve my animation skills. There are some bad things here and there in the film, but overall, the experience was convincing.

Each animation was shot on camera to get a good rhythm reference; I also started from the storyboard and the camera motion preview to get strong bases. Key poses have been extracted from the video to create a pose by pose animation, then I filled the gaps with keyframes and adjusted the shot length, shot global rhythm and camera path.

We can see in the Julia concept drawings and turntable that she is wearing a short dress that evolved into a long dress for the film. The reason for this transformation was that at simulation time when she was on the floor, (lighting her Christmas tree), the dress was too short!

Therefore, I had to improvise a longer dress model to cover her knees and a part of the floor. This caused no major issue during the simulation of that second version of the dress except a few more simulations with different settings on the shot Julia is jumping in the window frame to prevent the dress passes over her head.

Yes, Julia had a wig

Simulation of hair, beard and clothes of St. Nicolas

As hair is basically generated on spline cages, it was skin wrapped to low poly geometries representing the global or per strands volume.

Julia had two different hair models created, one for indoor shots and another for outside shots when she wears her hat. Each model was separated in to many hair parts: global, strands, fringe. Working with divided parts of a hairstyle made the animation process easier, even more so when you're dealing with long hair.

The most complex simulation was for St. Nicolas's hair, at the time the model was created, (in 2012), nothing was really optimized. However, the character's beard simulation was so smooth and flawless; it looked like a dream to work with.

Thanks for reading the second part of this making of. In the third and last part I'll talk about the rendering of the film, how the poster was created and I'll have a little word about music composing.

Click here is you missed part 1
Head over to Nicolas's website to see more of his amazing work
Want more 3ds Max tutorials? Why not check out our eBooks for inspiration
Check out our latest Kickstarter project here