Christmas in Alsace - Making Of - Part 1

Christmas in Alsace 2015 is the fourth film of a series of promotional short films inviting viewers to spend end year's holidays in Alsace. It's a collaboration between Gaylor Morestin (artistic support), Thery Ehrlich (music) and me. The project consists of a poster and 2 films: a 2min50 length version and a 32 seconds long trailer displayed in Paris theatres between October 15th and 25th 2015. This year's theme was "Christmas tree and its ornaments". In the first part of this making of I'll come back to the Genesis of the project, storyboard, design, and modeling.

Pre production of the film started very early on this episode, around January 2015. Therefore I had time to think about a little story and I came up with some drawings and concept arts first, then moved on to the creation of a storyboard. The final scenario is very similar to the original one, much to my pleasure, as I wanted to direct a real short film and not a common commercial film.

Going with a less realistic character design gave me more freedom about visual creativity in the end sequence. After years of watching CG cinematic films from Visual Works, a CG studio working with Square Enix, it was natural that I jumped at the chance to try creating a sequence that looks like those from the Final Fantasy games of the 2000's. With all the knowledge gathered through the years and workflows I start to fully understand and use, I wanted to have fun for the end of that Christmas adventure. 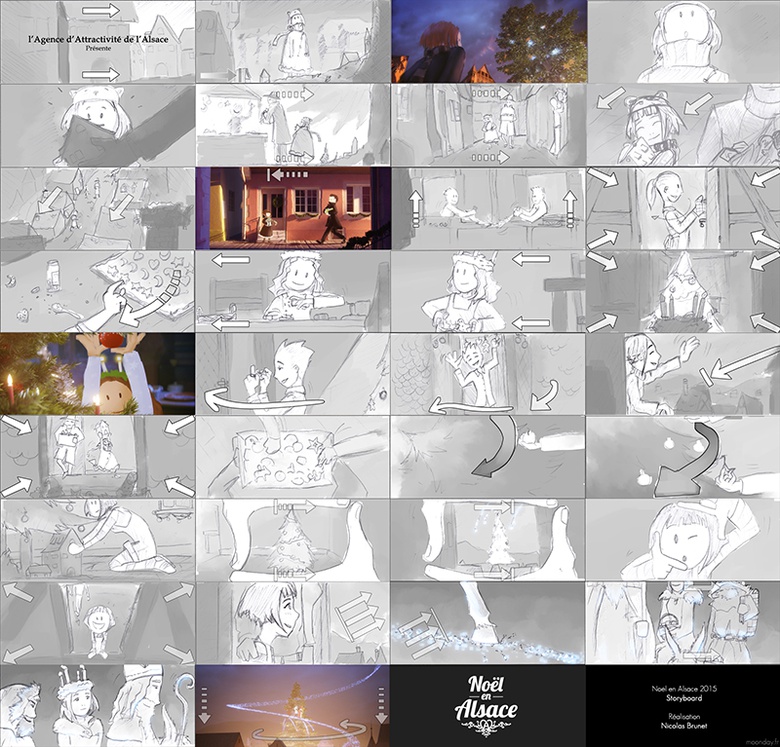 After a few drawings and some designs, Julia, the main character was born. The idea was to design a child aged between eight and twelve years, that's why she wears a huge cloak shaped like a bell and a "kawaii" half bear, half panda hat.

The secondary characters all come from Julia model. I used a method I call "the Miyazaki workflow": it uses the same head with different haircuts, (it worked pretty well!). There were four types of character which shared the same base mesh: girls, boys, women, and men. The men are based on the boy's topology and the women on the girl's. 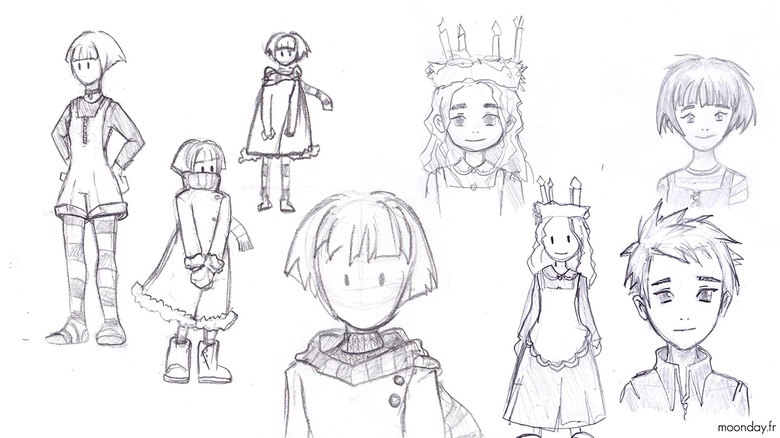 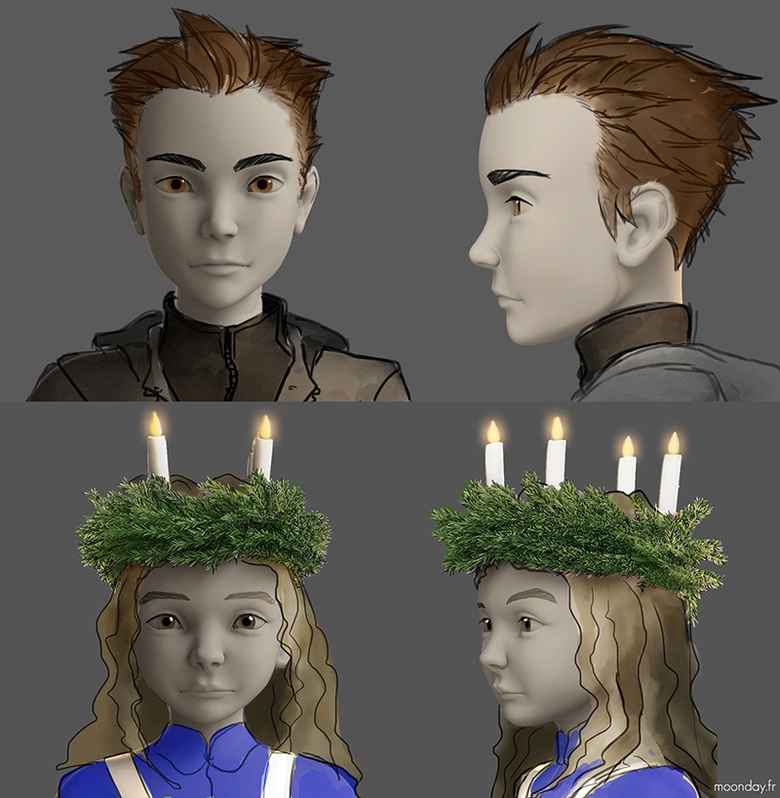 Poly modeling workflows were used to create characters. All based on the drawings and details were added with displacement maps created during texturing process.

Anatomies of the characters are based on Toru Ehara works. The artist has found a good compromise between real and manga anatomy, therefore I used his work as inspiration to create the bodies of my characters.

Most of the film objects are based on real life objects from my house. When I didn't have suitable references, I looked in my pictures database to fill the gaps.

As this project was a professional mission, using plug-ins to avoid time wasting was crucial. The three most useful were GrowFX, RailClone and FurGuides Painter. 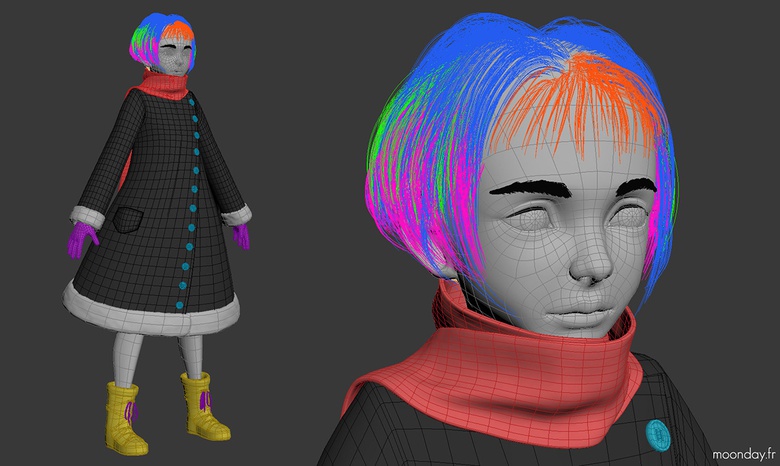 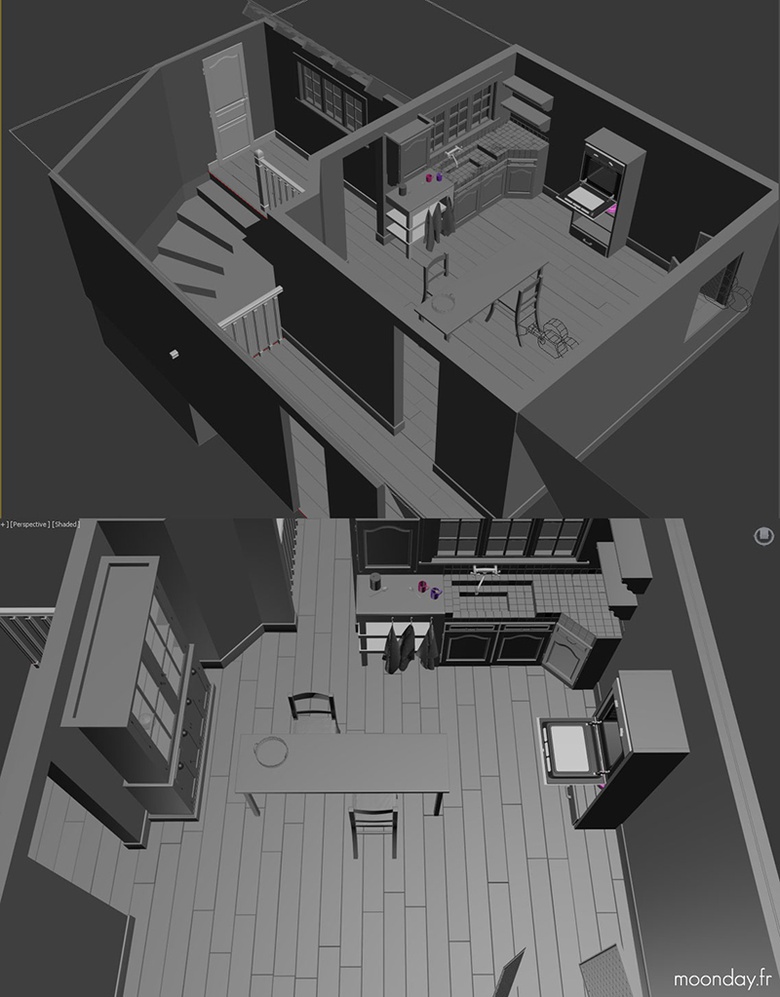 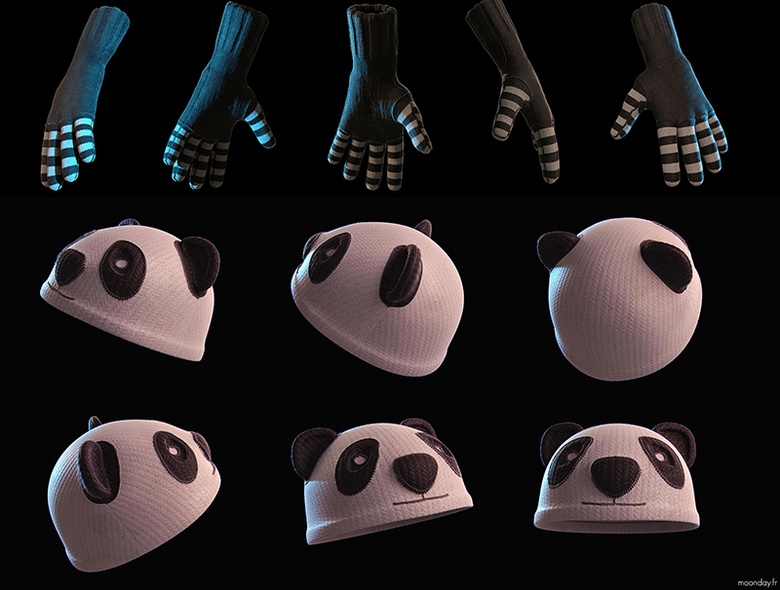 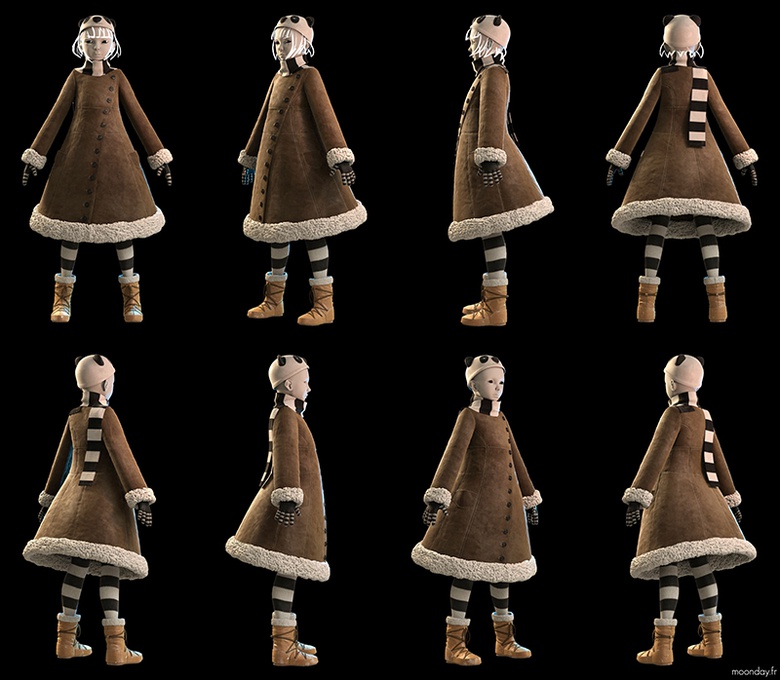 I used GrowFX for tree creation and also the garlands and pine crowns. The most challenging tree of the project was the big pine tree we see all the time in the film. Instead of creating the tree from the trunk to the thorns, I started from the thorns, the tertiary branches attached to secondary branches and so on, until the trunk to get a 30m high tree like the one we can see each year in Strasbourg.

Evolution of the great Christmas tree until its final form reaching 3.7 million polygons 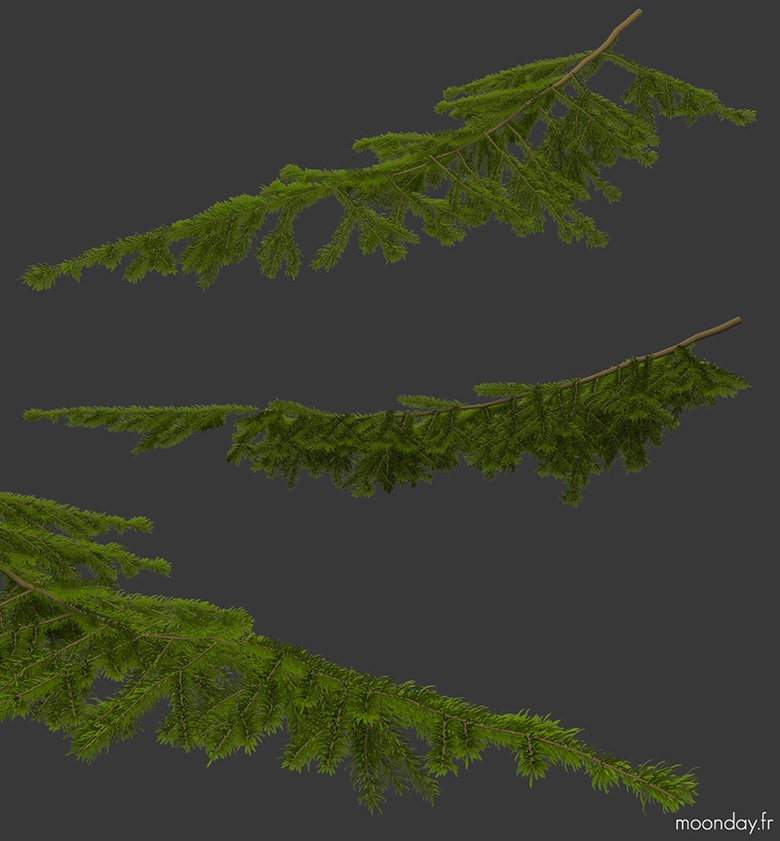 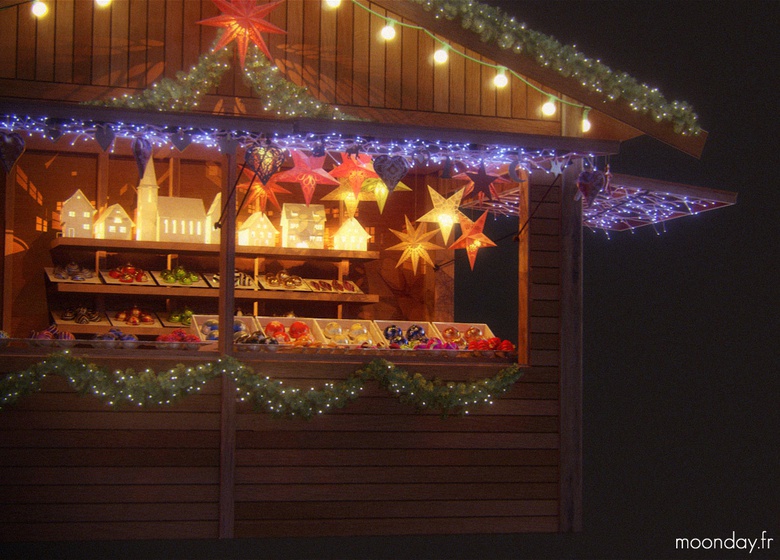 In the 2013 episode I explored a few tracks on how to create villages for the final shot of the film. I finally used 3ds Max paint objects module, a long and destructive workflow.

This year, I welcomed RailClone! Once assets have been created (low poly Alsatian houses), all I needed to create was a single array driven by a spline to draw streets full of houses aligned to the spline segments. To test the process, I downloaded a map of the historical centre of Eguisheim and drew splines on top to generate a village. The result was conclusive enough to be used in the film.

The plug-in was also used to generate some wood floors and roof tiles. It was very convenient to generate medieval pavements on the roads and get random patterns in just a few clicks. A totally non destructive workflow compared to my 2013 attempt.

I definitely couldn't manually place all of the books, DVDs, and Blu-Ray cases in all of the different pieces of furniture in the film. Again, RailClone did a great job, after watching some tutorials on Itoo Software website; I managed the complex storage equations in a few minutes. 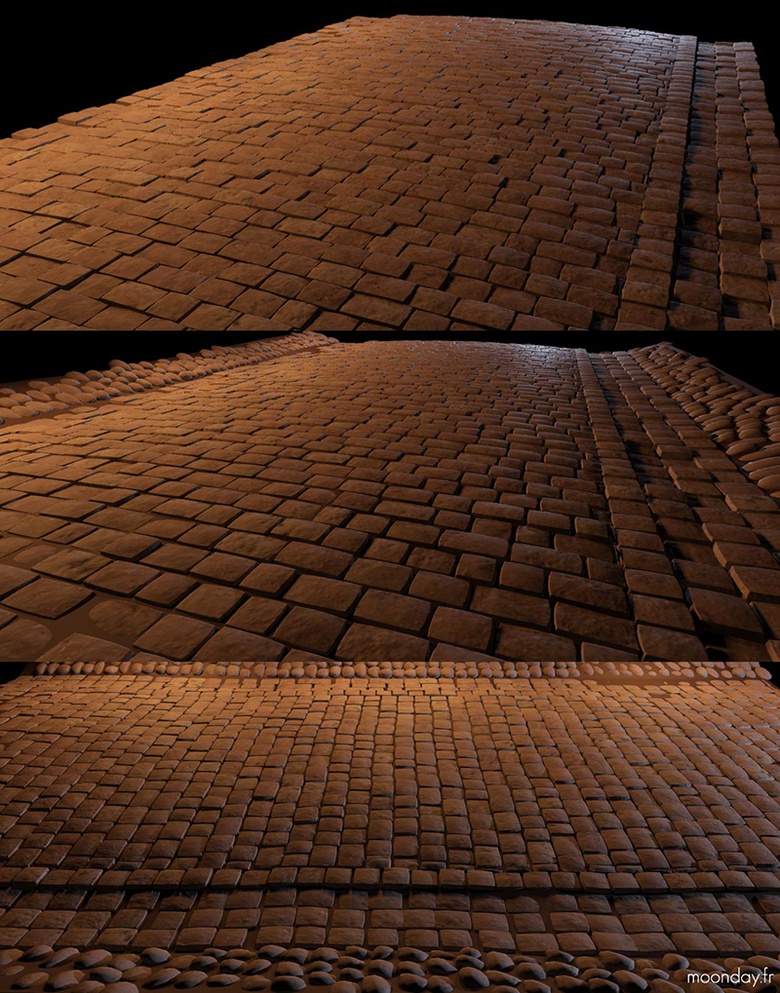 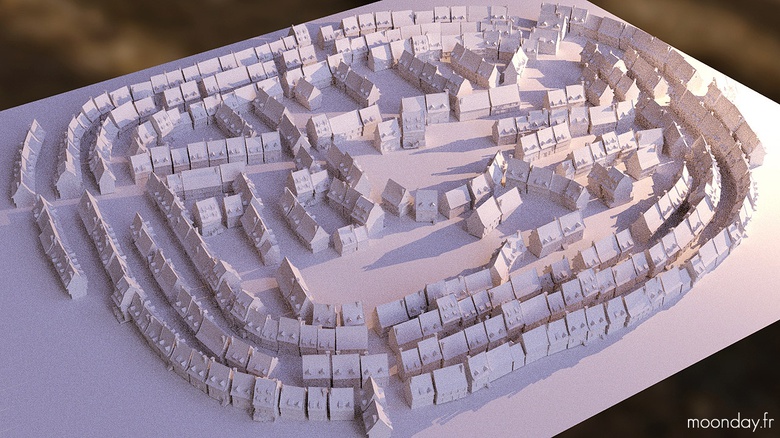 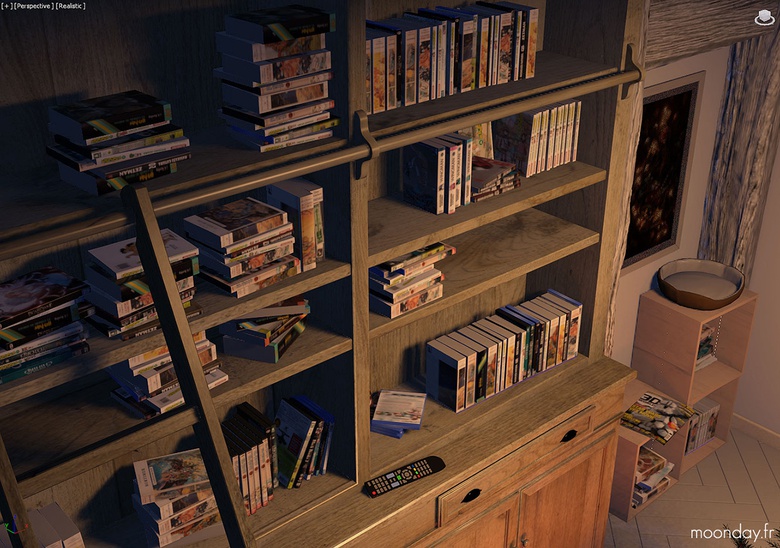 The many instanced objects created with RailClone

To generate the crowd we see during Christmas market scenes, I finally gave a try to 3ds Max Populate module. Since version 2015 we can now bake characters animations and rigs, a huge step ahead.

Crowd from the 1st shot, a huge thank you to the depth of field.

PhotoScans of some of the models

Some elements passed by what I call a "smart modeling" step. Christmas biscuits were covered with sugar using SnowFlowPro plug-in, Christmas baubles were generated with procedural textures, and Julia's scarf has been positioned around her neck with a cloth modifier… Never hesitate to go deep into the technical aspect and leave the artistic side for a few minutes, results can be surprising!

Modeling and placement of a scarf with a cloth modifier 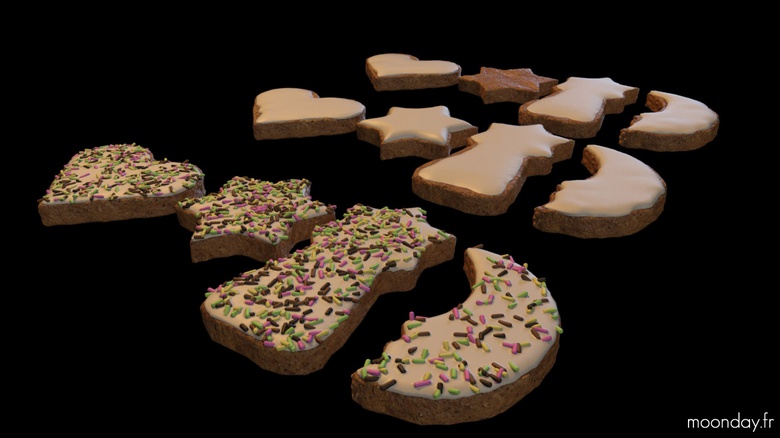 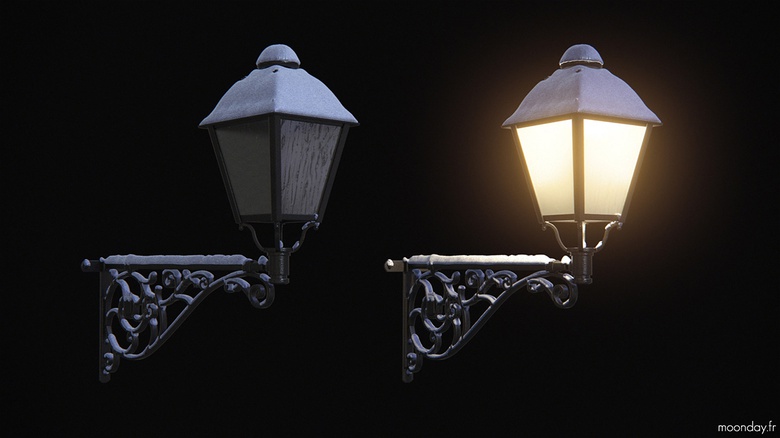 On the same principle, the houses from the film were roughly modeled; details came from displacement maps created in Substance Designer, no time to waste in a topology and unwrapping puzzle on each model.

As an example: once a house UVs were unwrapped, I created an ID and basic displacement texture to show where concrete and wood beams will be generated. ID textures contained as much colors as wood beam angles.

Inside Substance Designer, I loaded the materials I created earlier, such as concretes and woods. Wood materials were oriented with a material transform operator, depending on the ID color. A multi material operator handled the many instanced using the ID color map.

Depending on the camera position, roof tiles could be generated from textures using a Substance material.

On wide shots, low poly houses were scattered with RailClone, displacement maps made the rest of the job at render time. Snow covering the models came from a material blend using a mask generated from a GroundWiz texture. 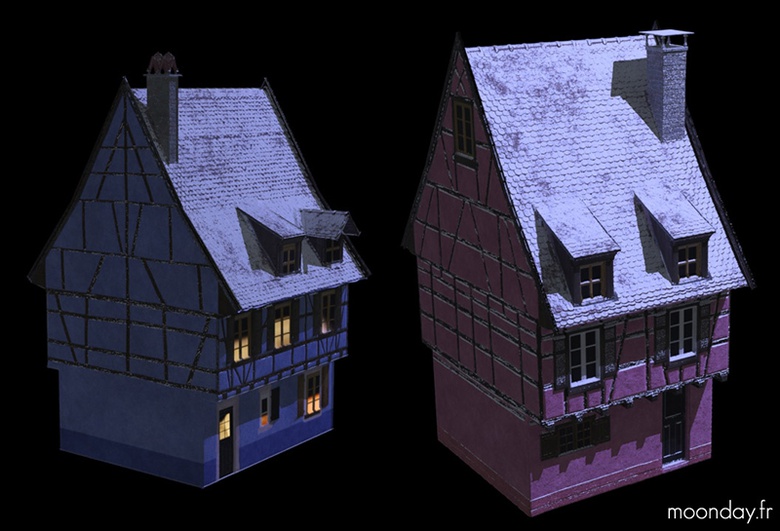 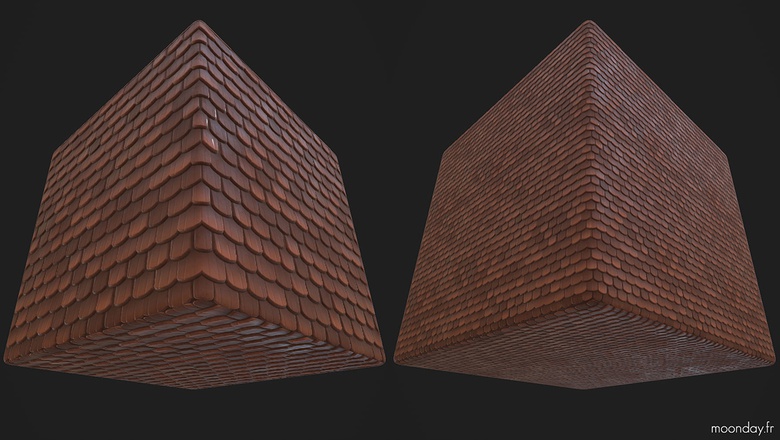 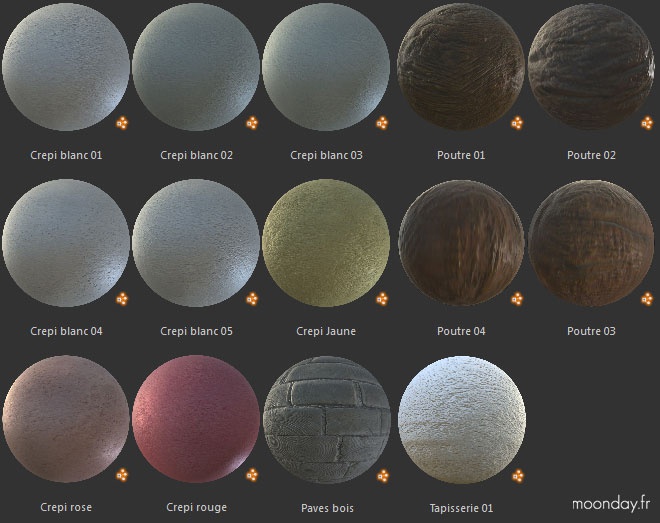 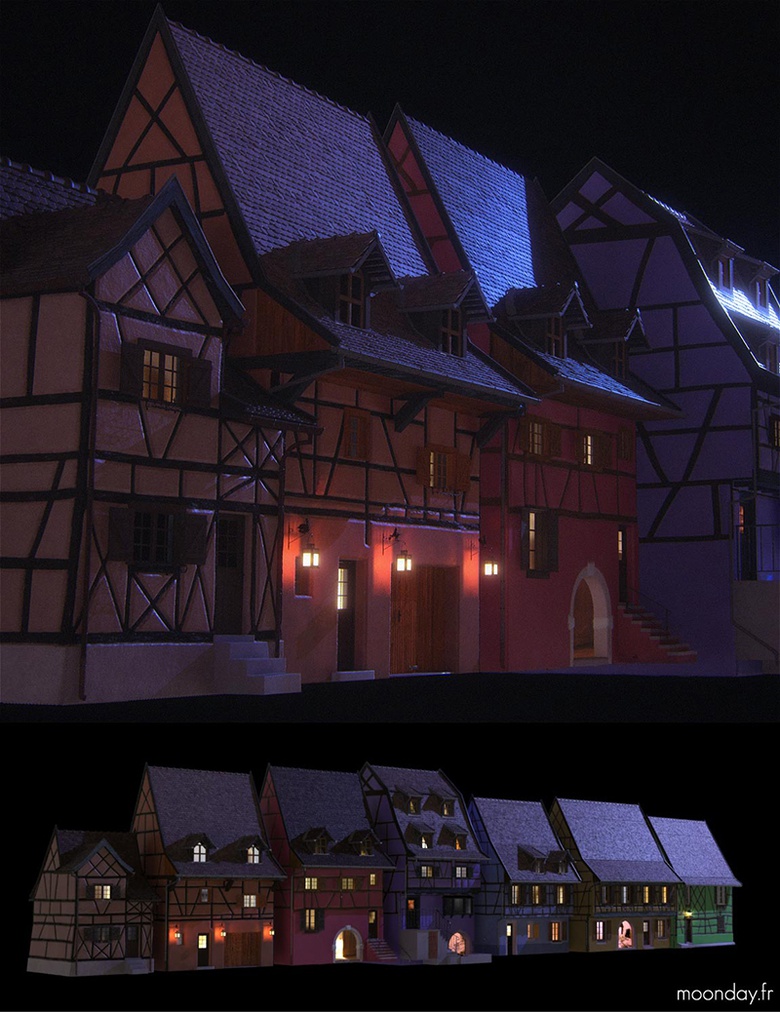 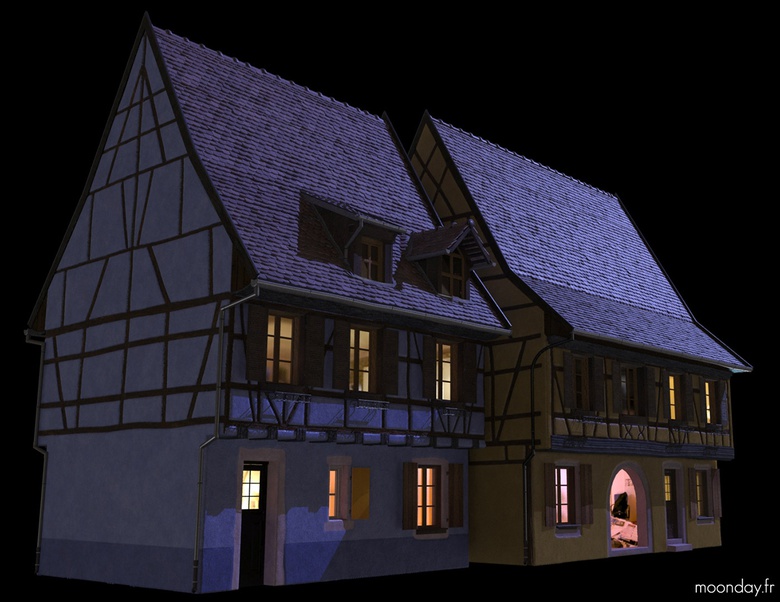 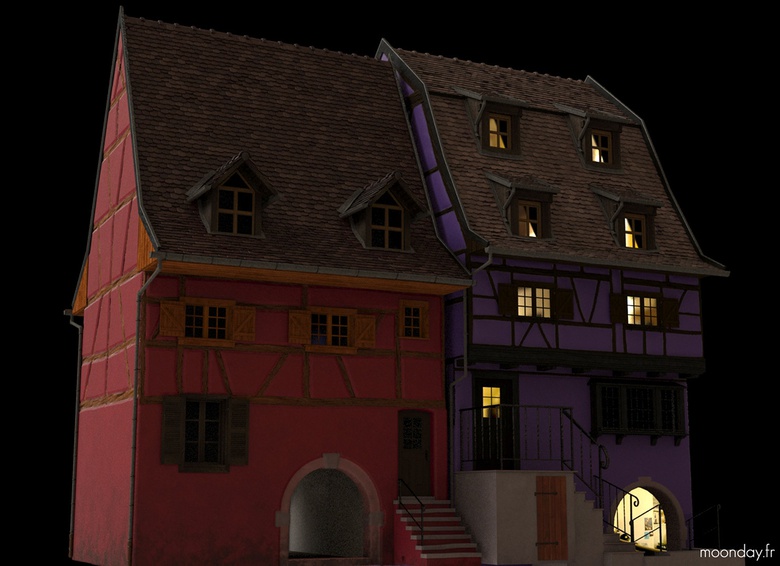 Thanks for reading the first part of this making. In the second part I will talk about the many ways I used to create the textures, how the film was animated and how to say goodbye to nightmares about the hair and fur creation process.

Head over to Nicolas's website to see more of his amazing work
Want more 3ds Max tutorials? Why not grab a copy of 3ds Max Projects!
Sign up to the 3dtotal newsletter here