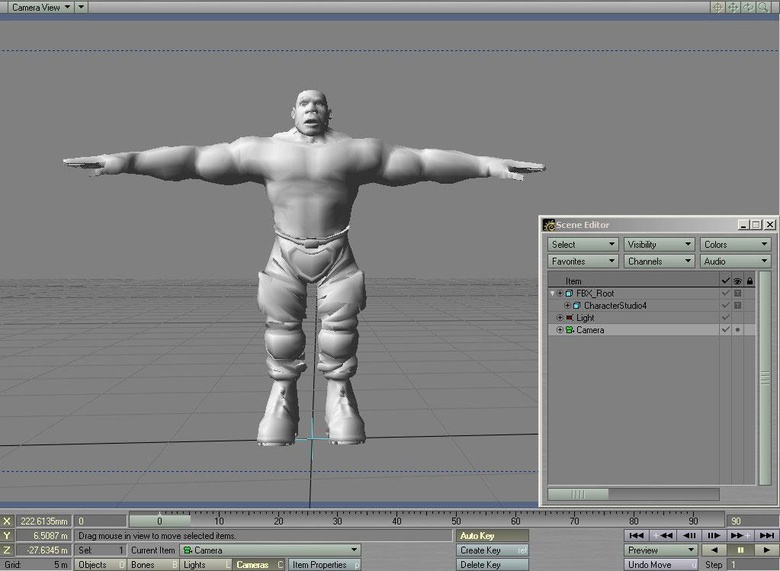 Export the scene using the LW FBX Exporter 6.0.2 which you can download with this link 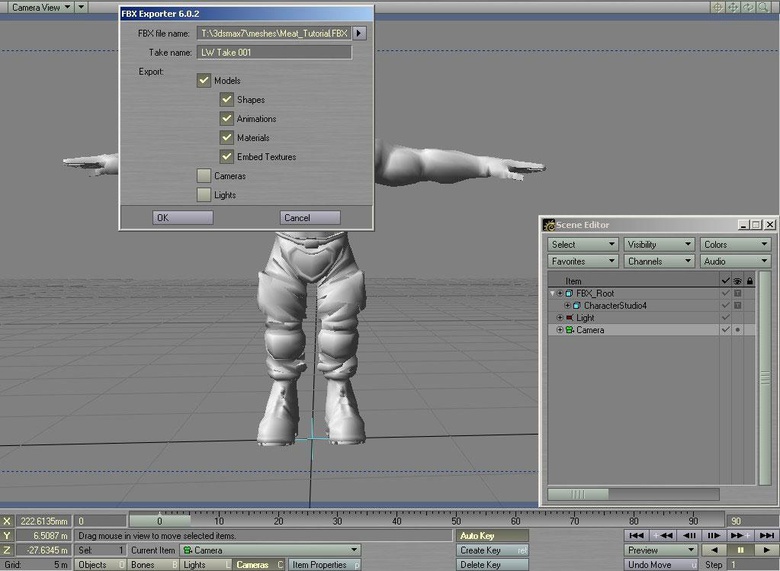 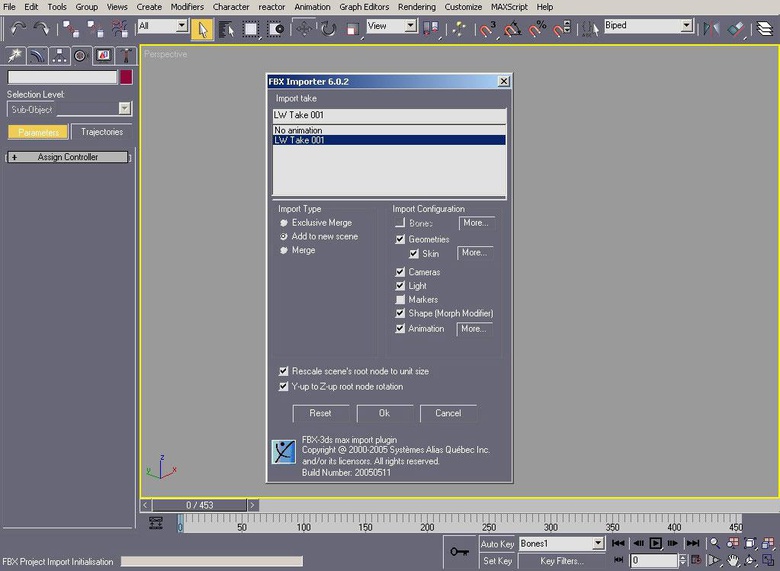 In Max create a "Biped" and "Physique" the character as usual. Save the scene with the character in its default pose. Title the scene "Master" as this will be the master scene from which all animation will later be exported. 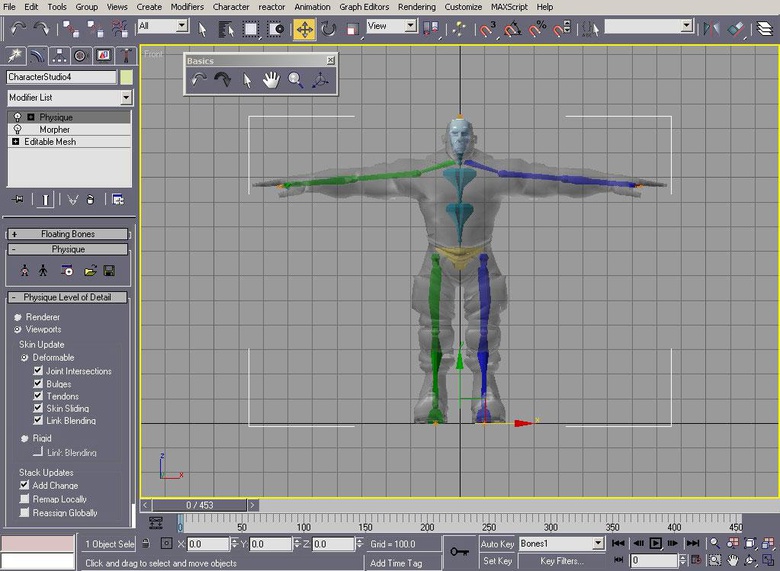 Export the Max "Master" scene back to LW via the Max's FBX exporter tool.
(Hit "Ok" and "Yes" to any screen that pops up). 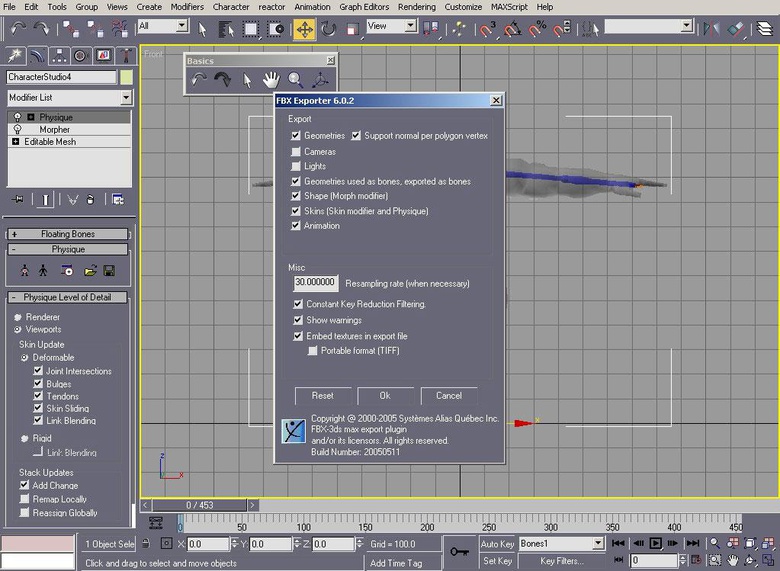 Import the Max "Master" scene file, which is now an *.FBX file, into LW using LW's FBX importer. Note the location of the "Object Creation Directory". 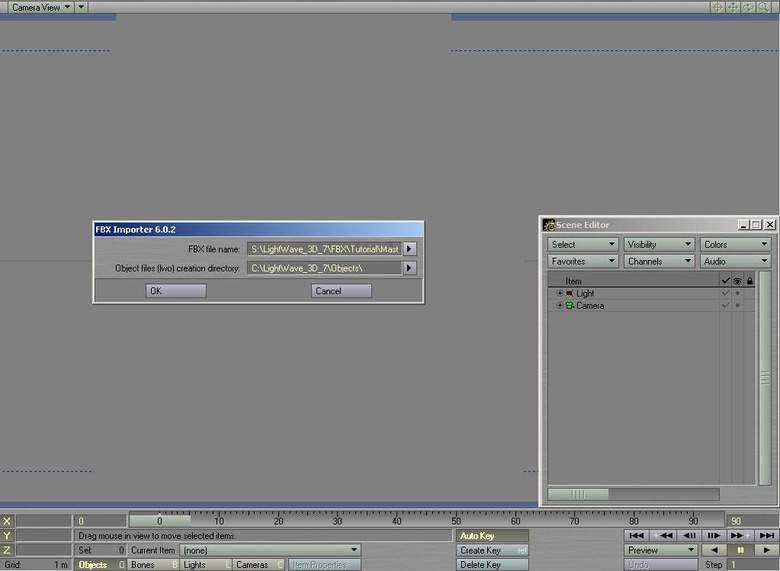 Presto! Your character and nulls appear. But everything is way out of scale and there is no skeleton? Don't panic! It will all make sense soon.

Select the "Bip01" bone and run the "MG Hierarchy to Bones (Null to Bones)" conversion plugin with "Use Parent Scale" turned off. 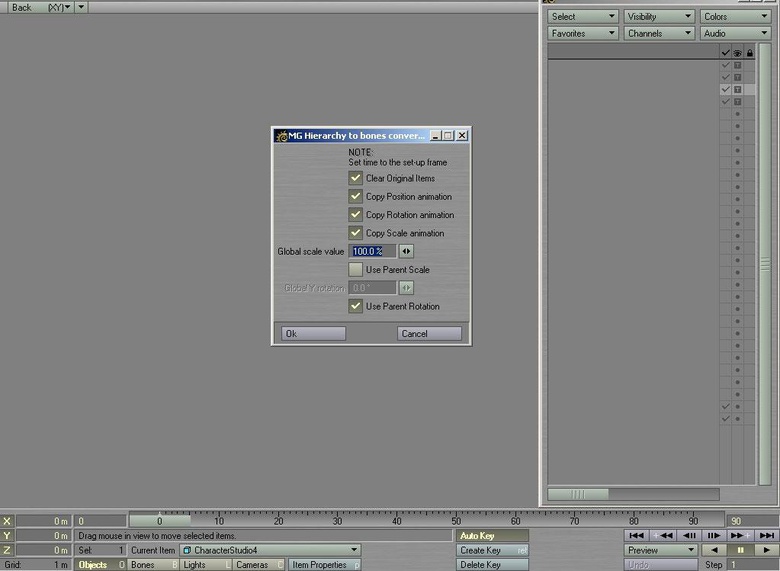 The nulls will convert to bones based on the position and orientation of the original "Biped" skeleton in created in Max.
Hey! Why's the skeleton so small? Actually it's the model in the scene that's too big, time for some magic. 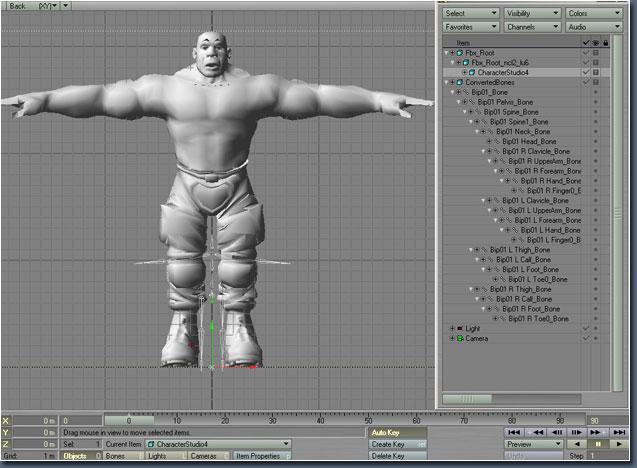 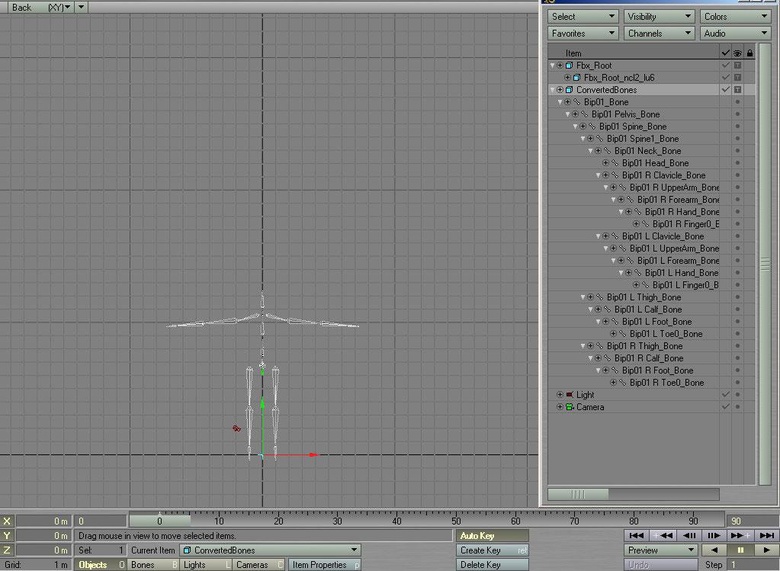 Select the "Converted Bones" object and "Replace" it with your imported model that was saved in the "Object Directory" when you imported the scene with LW's FBX import plugin. 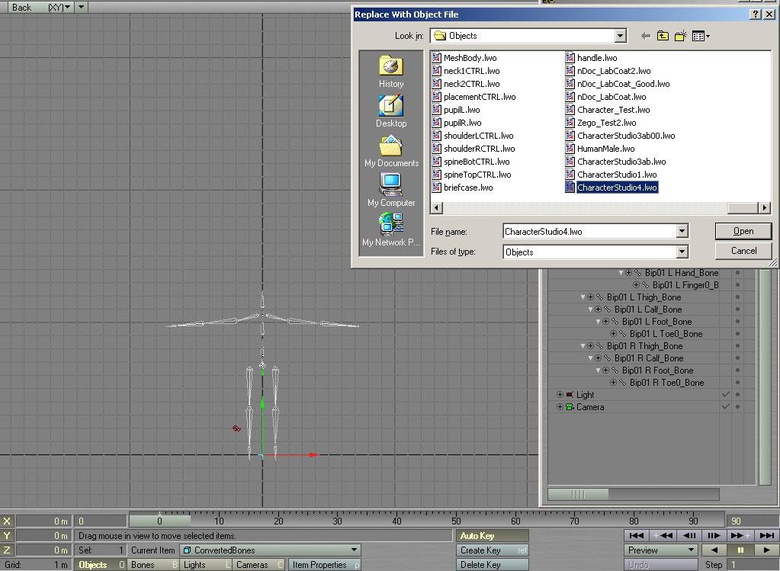 Shazam! Theirs the real model that you exported to Max and back again. It should have all the weight maps, endomorphs, and textures, etc., whatever you may have had on your original model.

Activate all bones and save the scene as "LW Master Scene", this will be your default scene that you will apply animation to with LW's Motion Mixer. 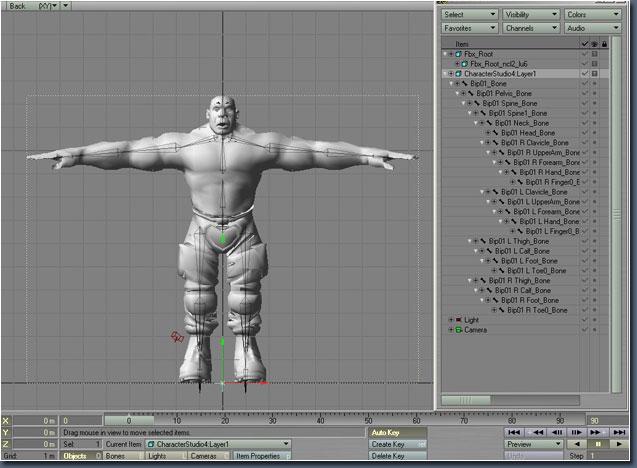 Return back to Max and open the "Master" file that you created earlier. Add some MoCap or Footsteps to the "Biped" in the usual fashion. Then export the scene via Max's FBX plugin as shown in Step 5 of this tutorial.

(If you use Max's "Motion Mixer" for your "Biped" animation, make sure you "Mix Down" the animation and copy it to the "Biped" before exporting).

Once you have your skeleton with it's motion, open LW's "Motion Mixer" and create an "Actor" for the "Converted Bones" object in your scene. Then add the bones from your characters skeleton to the new "Actor".
Add the motion to the mix track and save it from "Motion Mixer" (*.hmot). Then save the scene as anything you like. 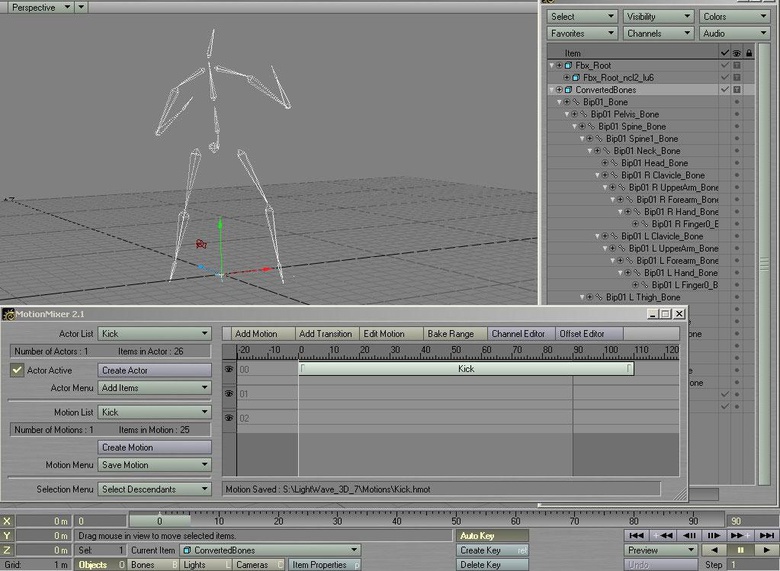 Load the "LW_MasterScene" file that you created in Step 12. Open LW's "Motion Mixer" and create an "Actor" for your character. Then add the bones from your characters skeleton to the new "Actor. 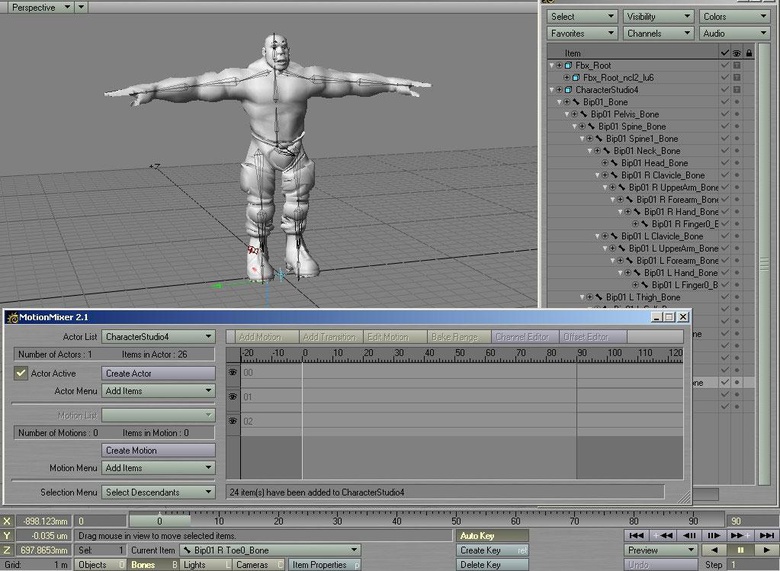 In LW's Motion Mixer load in the (*.hmot) motion that you saved in Step 15.

Click "Yes" and "OK" for any windows that pop up).

Now just add the motion to your "Actors" track and away you go!

*Note: The quality of your characters deformation and weight maps in LW are based on the envelopes originally created in Max with the "Physique" tool. So make sure things are deforming right in Max before you start exporting stuff, it'll save you time tweaking in LW 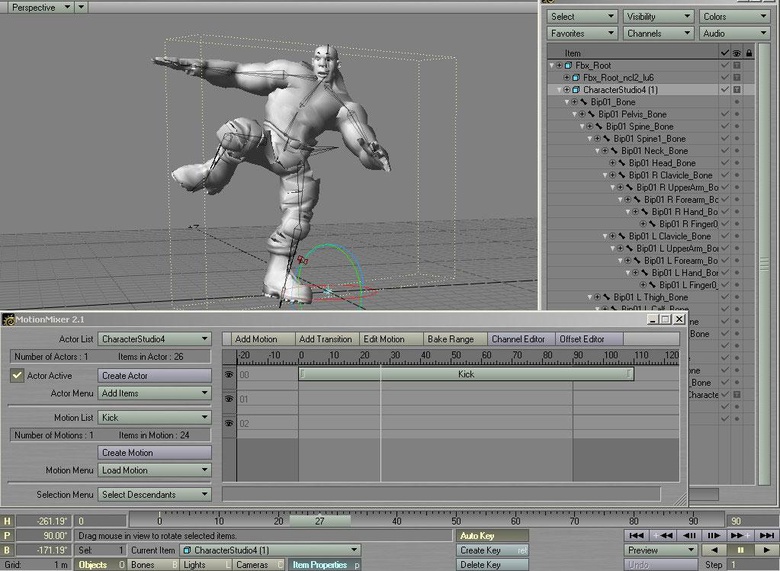 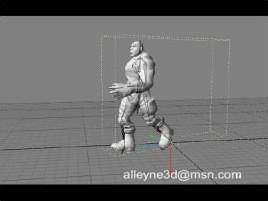 This tutorial is for anyone who ever wanted or needed to use the animation power of 3D Studio Max's Character Studio with the FX and rendering power of Lightwave 3D but thought it wasn't possible. Cheers