Discover how to accurately portray a character's facial expressions, and more, with the Character Portrayal eBook - chapter preview… 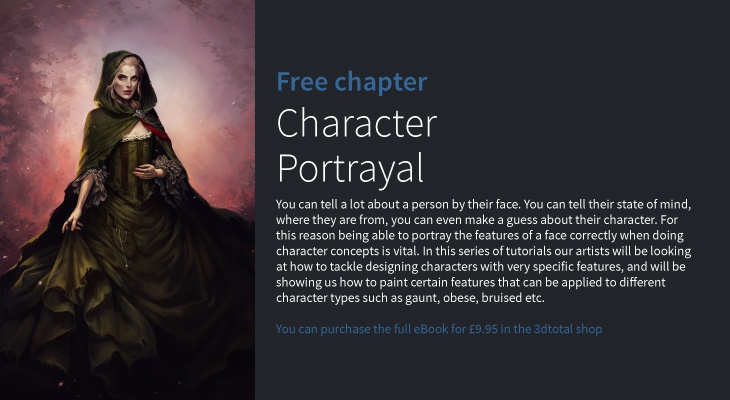 Characters are by far my favorite subject to paint, so when tasked with doing just that there's always a little buzz about it for me! The sky is the limit with character painting, but in this case I do have a buzz word to give a little guidance, which is "gaunt".

When I first started painting creating characters was an exciting prospect and I wanted to make them as original as I could. So, naturally, I pelted my characters with ten thousand things; earrings, belts, accessories, feathers, satchels, boots, beads… you name it, they had to have it! A few years on and I've learnt a few lessons. The most obvious being that to create a character you don't need to give them an identity by saddling them with a ridiculous amount of stuff. It's my opinion that nothing is really original anymore. I don't mean that in a depressing way, it's just that I often find myself in the confusing situation of wanting to create an original character, rather than a good character. Creating an original character is one way to set yourself a goal you'll probably constantly battle with, whereas creating one that is good, well that's not so scary.

Let me also say that I don't think any character I create is the greatest thing I've ever done, not by a long shot, but there is something I like about each and everyone one of them. There's also a ton of things I don't, but I'm not focusing on that right now!

So here I am with a blank page and the word "gaunt" floating around in my head. At this point I have no idea what I want to create. So, as I so often do, I take a fairly light gray color and just start blocking in a silhouette – this is how I begin a painting 90% of the time. If you're not a hundred percent sure about what you want, it can be a really good way of "finding" the image. Having settled on a rough shape I begin to draw a more detailed sketch above it (in a slightly darker tone). I kind of like the rough sketch at this point! It's fairly messy and she's obviously missing some limbs, but the general suggestion is there for me to work on. It's fine to work the sketch up a little more if you're more comfortable with it (Fig.01). 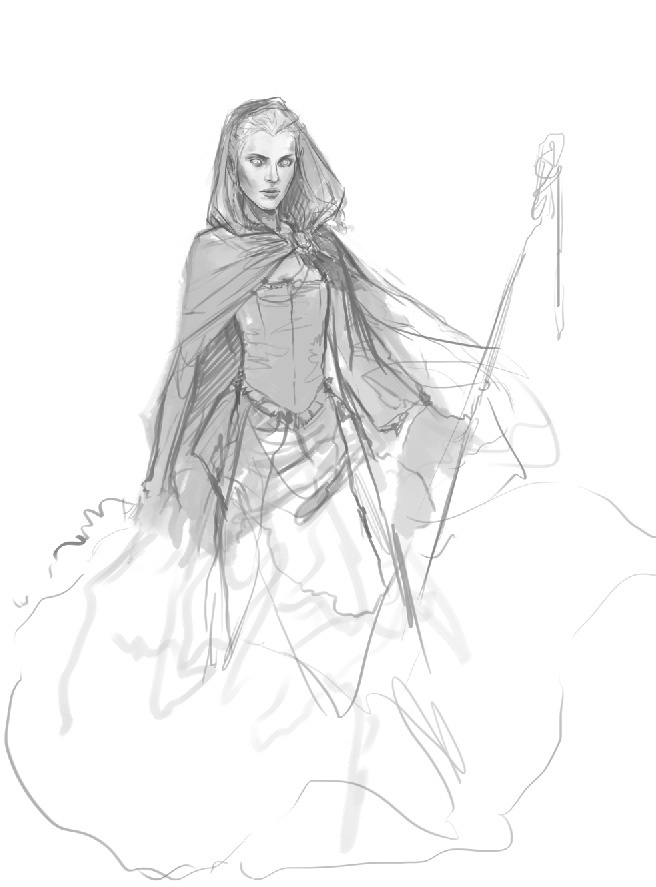 There is an absolute plethora of different custom brushes available in every corner of the internet and whilst some of them are great, I've always thought you can't go wrong with a basic brush. For the entire sketch and painting, I'll be using the standard Photoshop brush 23 (chalk 23 pixels).

I merge the silhouette and sketch layer together and set that layer to Multiply, making it transparent. Then on a layer below I start to block in some base colors. They're very crude at this point and I am not trying to be neat. It's just about setting a mood with the colors. I'm also not entirely sure where I want to go with the color scheme at this point, so these blue/gray tones are fairly neutral and can be worked into different colors easily enough (Fig.02). 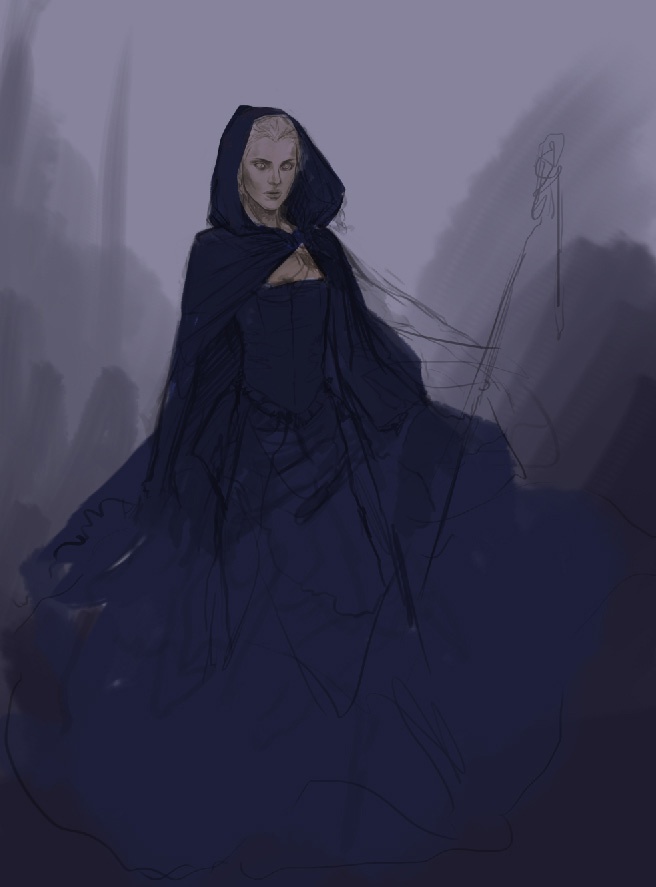 From this point onwards everything I paint is above the sketch layer. I also flatten the layers throughout the painting process, which isn't essential; it's just my preference. During this process I rarely stay on one section for too long. I hop to different features just to make sure I don't get too bored working on the same section for too long. It also helps to come back to sections later on as you'll notice the mistakes more easily (Fig.03). 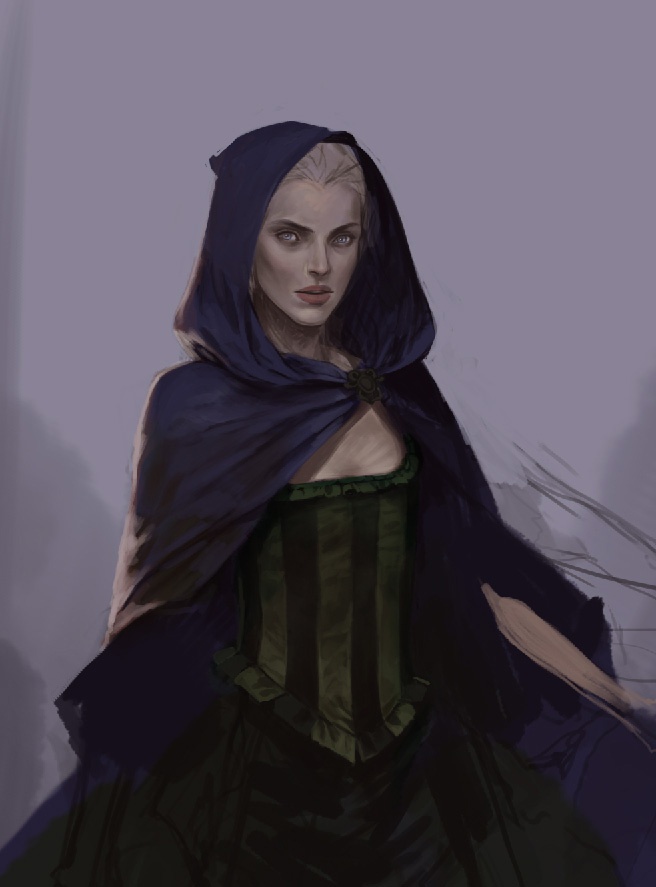 The section that I will always work on first, however, is the face. This is the point when I need to think about my buzz word; "gaunt". This is a chance to bring out her features, giving her a gaunt appearance. Normally, if I was painting a young lady I'd give her a relatively smooth face; this character, on the other hand, obviously needs to look gaunt. To do this, I'm giving her some pretty harsh shadows as part of her facial structure, especially around her cheekbones. I'm also adding in highlights along the top of her cheek and giving her fairly dark eyes and shadows underneath too, to emphasize her eye sockets (Fig.04). 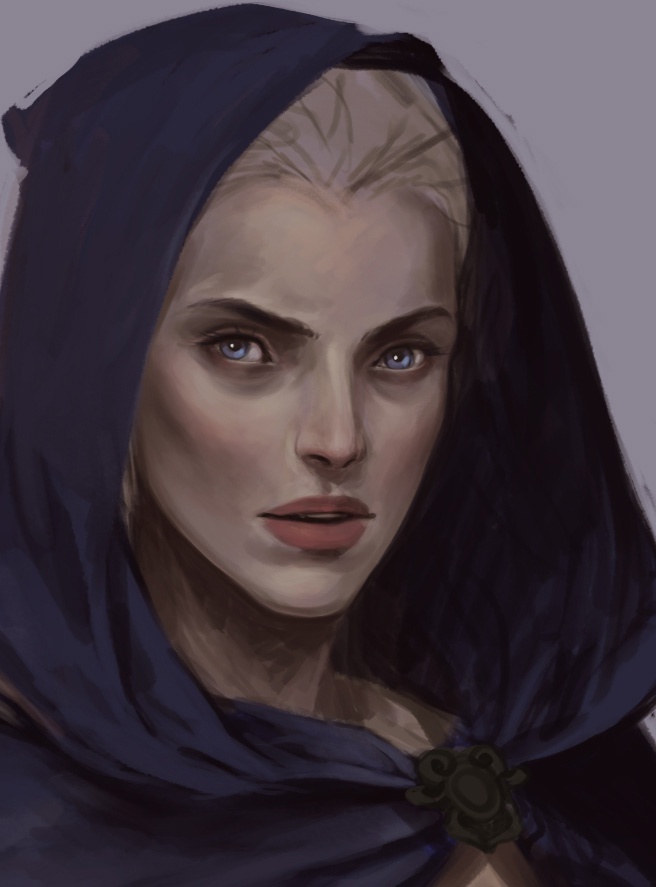 As I refine the details of the painting you'll notice subtle changes to her face (Fig.05). Throughout this process I'm adding more highlights and shadows, adding to her gaunt appearance. I also add in some pinkish tones on her lips and a little on her cheeks. This adds a bit of warmth to her face. Although I want her to look gaunt, I don't want her to look like a total corpse! So I'm warming up the tones just a touch. 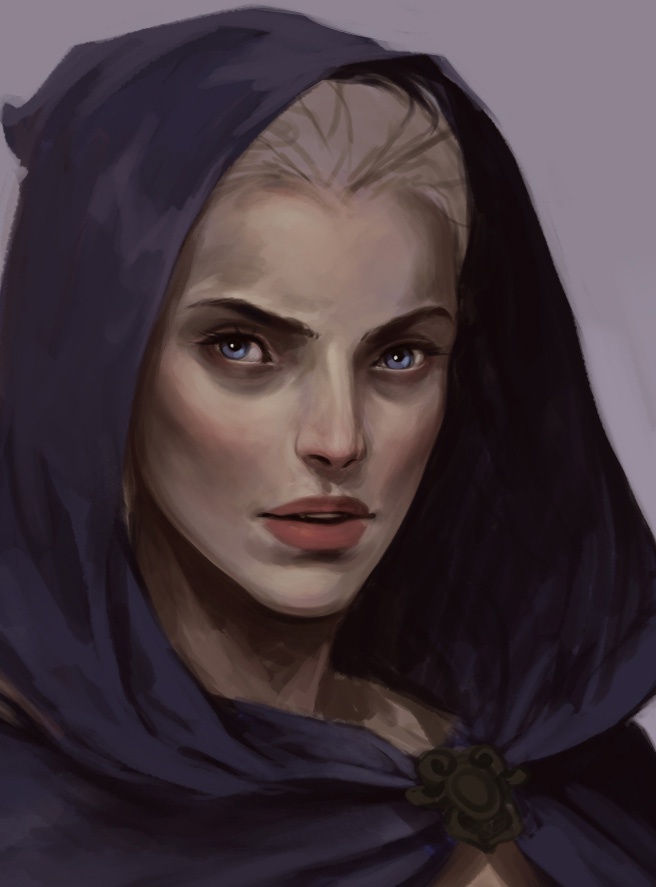 Don't forget to flip your image! Flipping is a great way to gain a new perspective on a painting (Fig.06). It really helps you notice mistakes. They usually stick out like a sore thumb once flipped! Try and do this every hour or so; that way you won't reach the end of a painting and realize it looks terrible flipped the other way (Image > Image Rotation > Flip Canvas Horizontal). 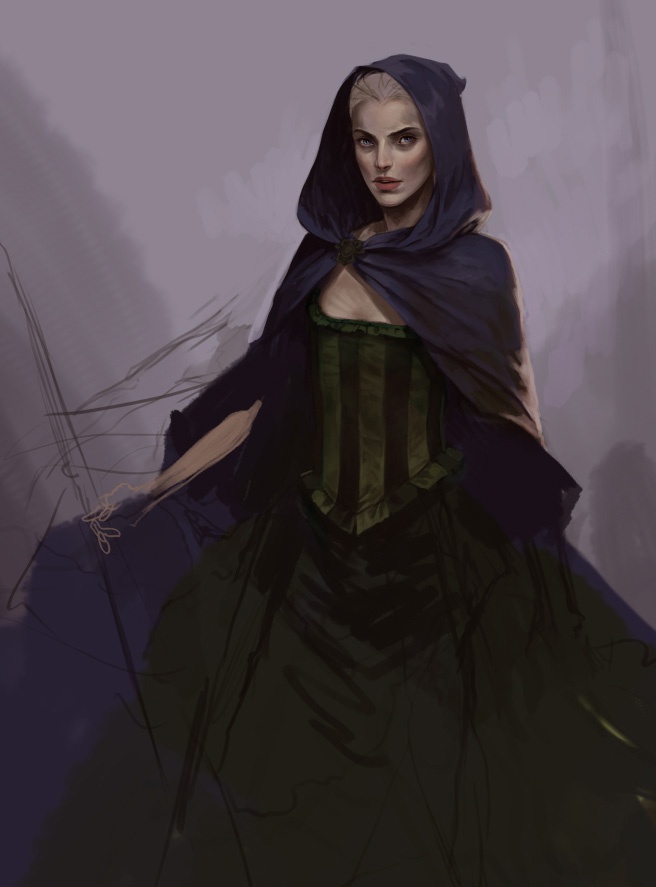 I said earlier that I don't think you need to give a character a large number of accessories to give them an identity. That isn't to say that I don't think they should have any. It can be a great way of adding interest, like a little spark to grab your attention (Fig.07). 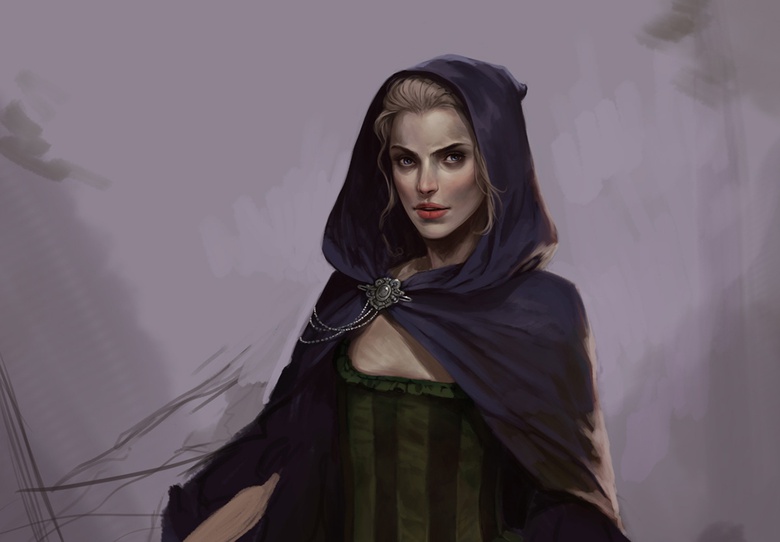 You can see I've added in a pin to her cape. These elements can be read into differently by different individuals, which is good because I like people to be able to make their own judgments about things (Fig.08). 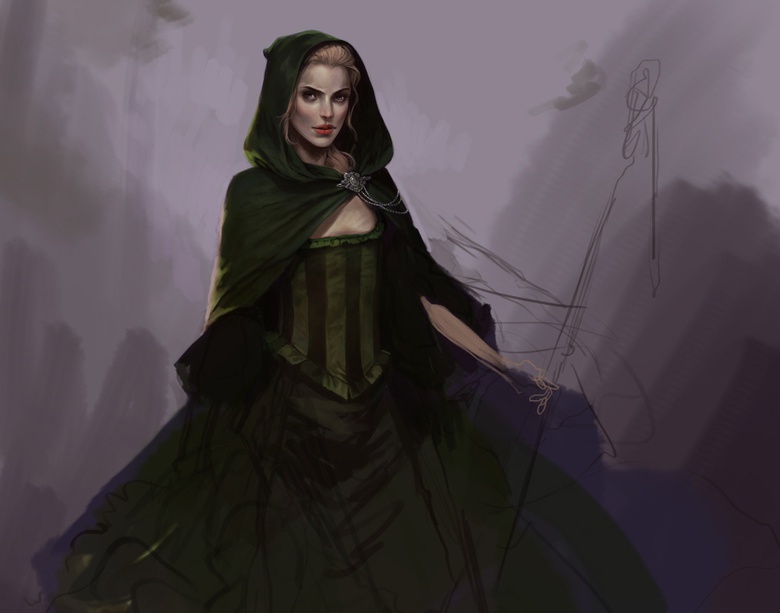 It could be a family crest on her pin, a symbol of a society or something else. Whatever you want it to be! I add in a little red ribbon/sash too; it adds in a little splash of color (Fig.09). 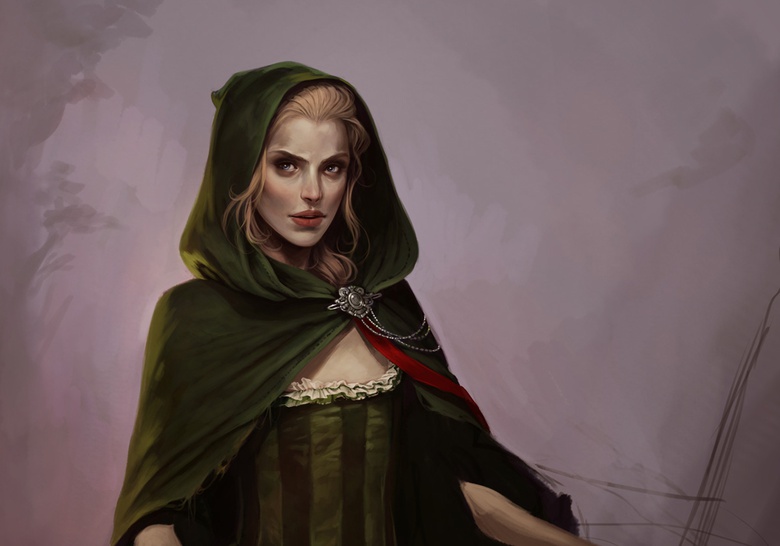 Hands can be the bane of an artist's existence, especially when learning. I know I struggled with them quite a lot. Naturally, practice helps. So don't cover them up or hide them away, paint them! When I first sketched out the rough idea, one hand was holding up a section of the dress and the other was holding some sort of staff (although it didn't take me too long to change my mind about that) (Fig.10 – 12). 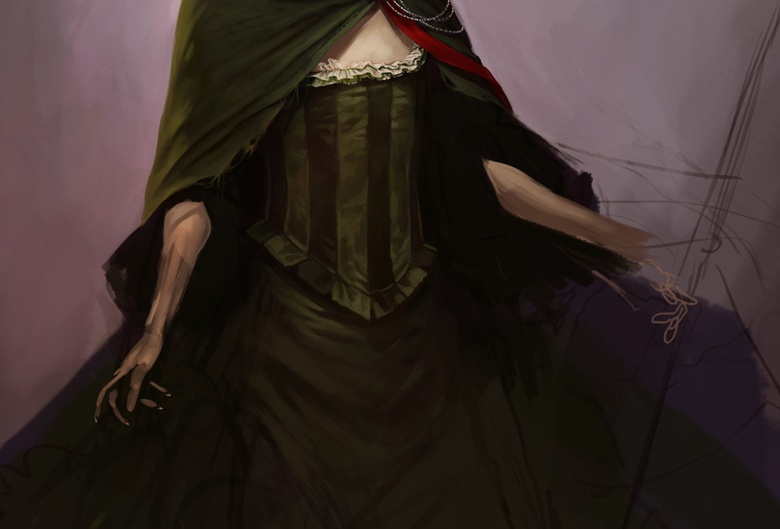 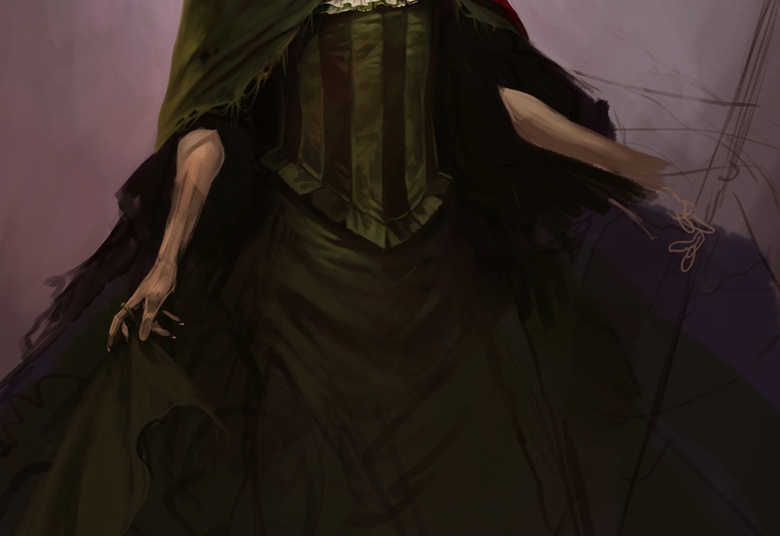 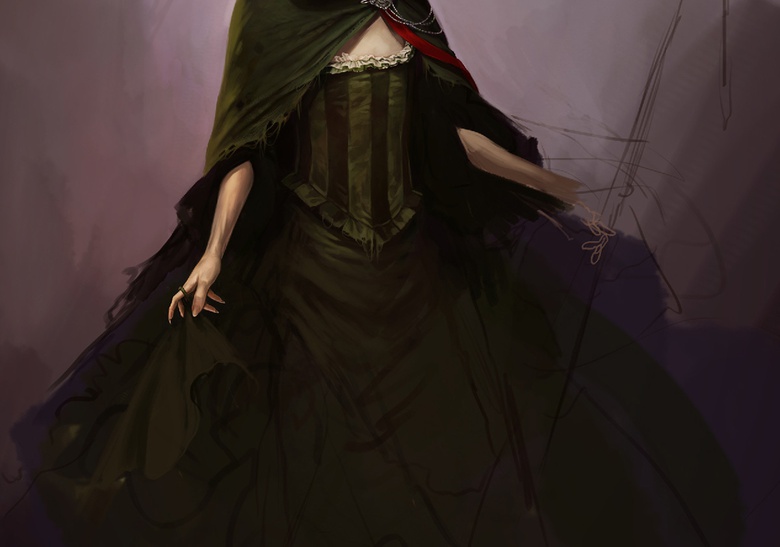 It felt a bit cheesy, so I'm opting for no staff at all, and a fairly relaxed gesture for both hands. For each hand I start with a very rough dabbing of paint, just to try and pin down the pose of the hand. Then I gradually build up the structure of the hand and add in some highlights around the knuckles and thumb, and also some pinkish tones on the tips of her fingers. I'm also keeping in mind my buzz word, "gaunt", giving her fairly boney fingers (Fig.13 – 16). 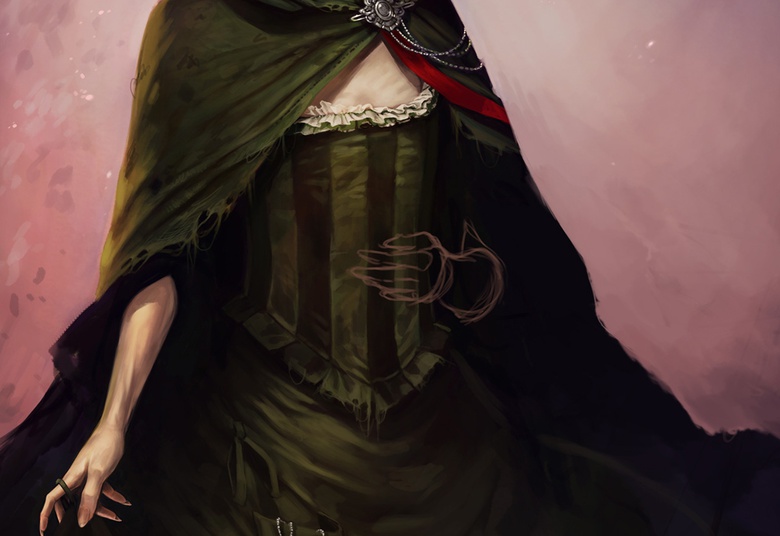 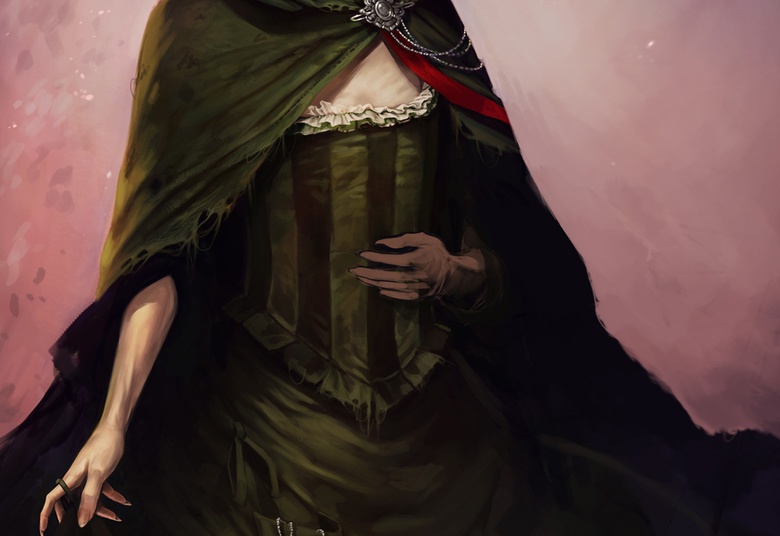 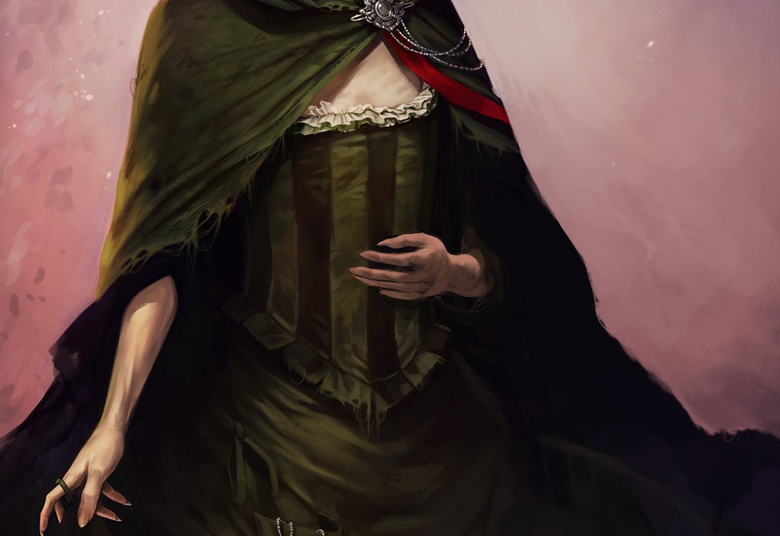 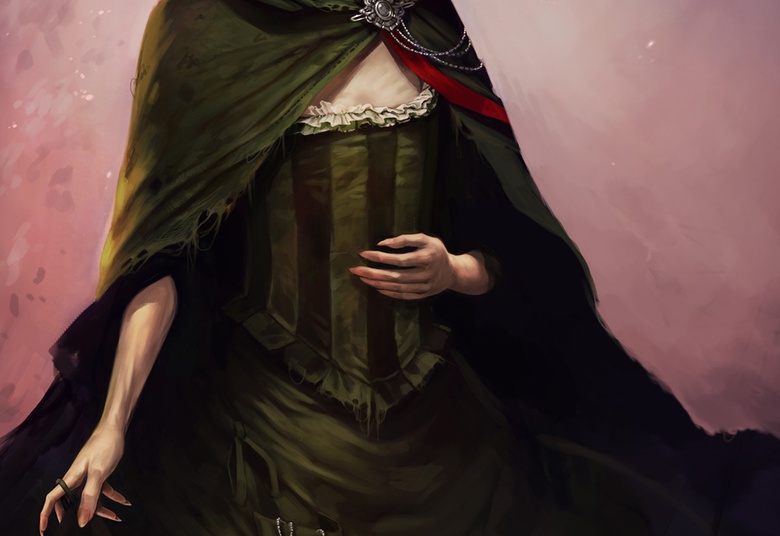 Try and think about the structure of the bones when painting, I personally find that it helps. Look at your own hands and if you're struggling there are plenty of references available.

Fabric is something that I love to work on, which is quite obvious with the amount of dresses I paint! You can see from the first sketch I don't really bother to detail clothing all that much, I prefer to just paint it in. I tend to block in the colors and very crudely start to add in the folds of the fabric, just by adding in basic highlights (Fig.17 – 19). 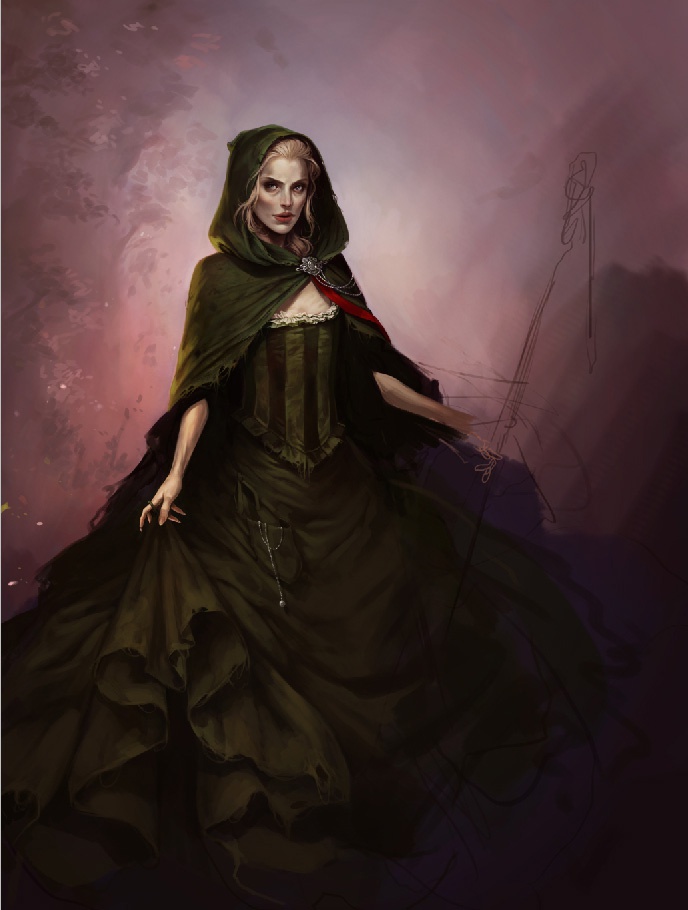 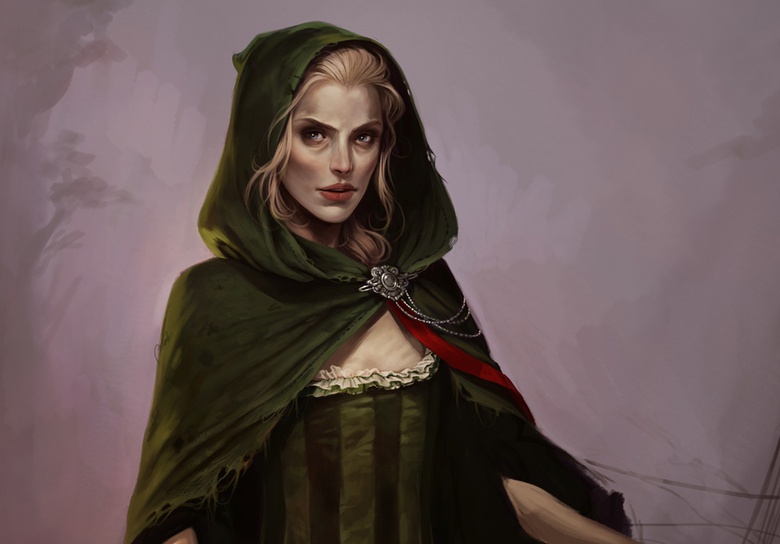 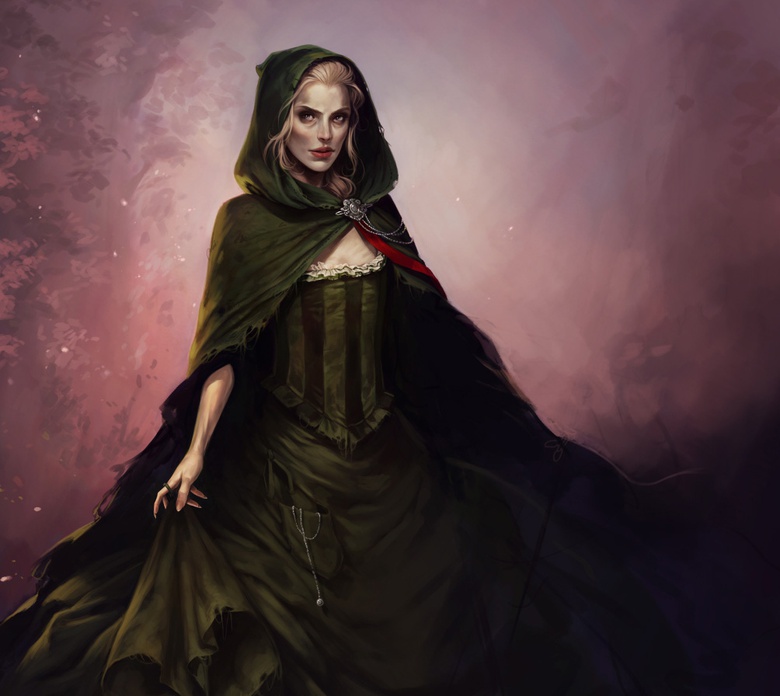 From there I refine in my usual manner, gradually working up details and more folds. I add a little stitching detail in places, and I also make the seams of the fabric a little rough around the edges. I don't want it to look too perfect. Again, if fabric is a sticking point, use references, your own clothes or have a look at stock.

Things are coming together and are pretty much finished at this point. For some final touches, I add in some ruffles around her sleeves which tie in with the lace on her dress (Fig.20). 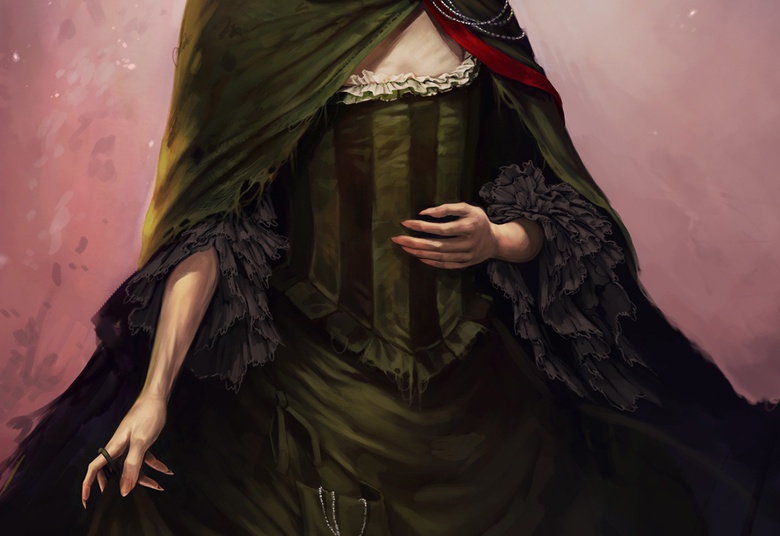 You might also notice that the colors in the background are a little stronger. I've added in some warmer peachy tones on an overlay layer (Fig.21). 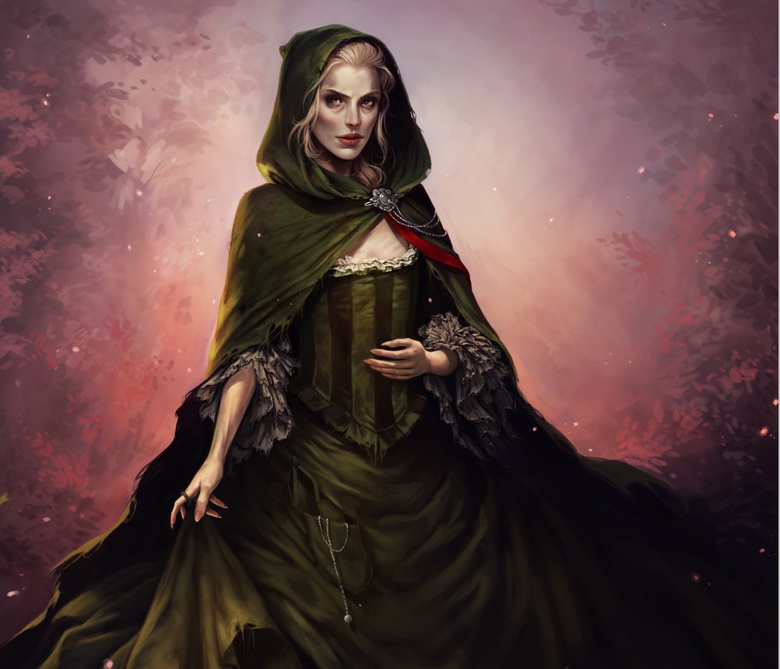 There are also a few specs/orbs in the same color over the lower section of the dress which helps to tie it into the background.

I hope you enjoyed my tutorial and have fun painting your own characters (Fig.22). 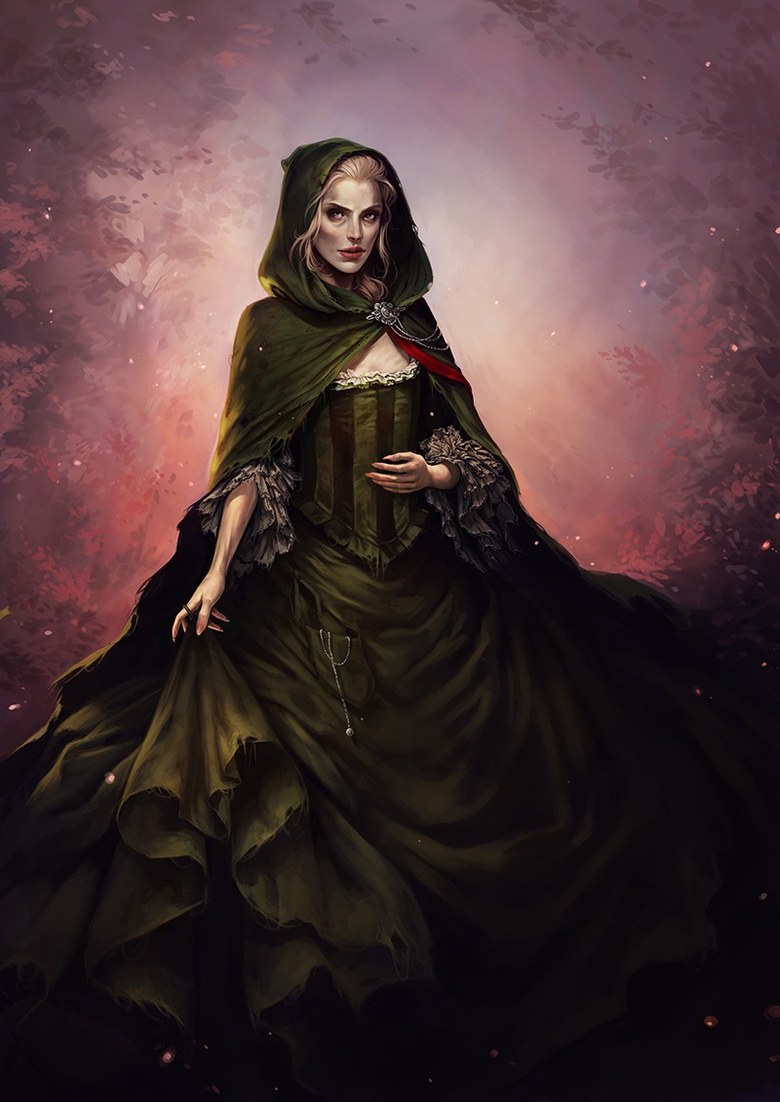 Get the Character Portrayal eBook now!
Check out our full range of eBooks
To see more by Charlie Bowater, check out Beginner's Guide to Digital Painting in Photoshop: Characters