In this beginner to intermediate series we create a retro looking Iron Man using the free software that is Blender. In part 7, we examine the finishing touches needed to complete the modeling stage…

We’re so close to the end and you’ve done so well! Before we finish up we’re going to take a few minutes to add in a few extra finishing touches which are really going to make the model look more realistic and show that extra care and attention has gone into it. When people see our character we want it to look believable. This will only be achieved if we introduce all the little imperfections, quirks and details that the model requires.

The first finishing touch we’re going to do is to smooth off the edges of our lego bricks. No edge in real life is completely hard, 90 degrees, and lego blocks if you look closely have a nice and natural curved or beveled edge. These smooth edges are everyone if you look around you and it’s important that we introduce them into our models if we want to make them look realistic. 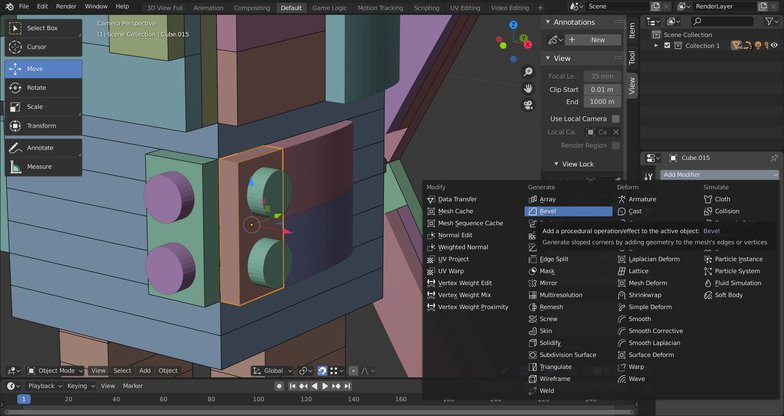 We can add these smooth edges by adding the ‘Bevel’ Modifier to our objects. Simply select your object and go to the Modifiers panel. Select ‘Add modifier’ and then ‘Bevel’. You’ll get a set of properties. There are two main ones that you’ll want to focus on. First of all there is the offset which is the size of distance of the bevel or curved edge if you will. Secondly you have the number of segments. The higher you set this number the smoother and more curved the edge is going to be. Use the bevel modifier on all your blocks. Feel free to add in a bit of variation between bevels to add in some variety. 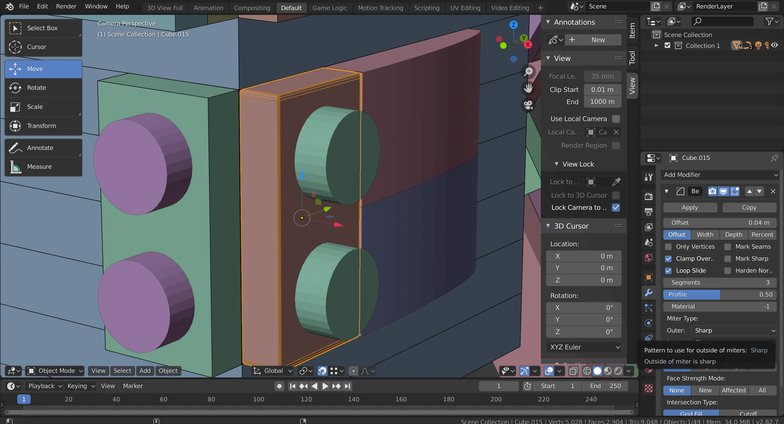 The bevel modifier lets you smooth off edges quickly and easily.

Some of the blocks have studs on them and others don’t. Some studs are hidden from site which means they don’t need modeling. The first step of creating the studs is to create your first stud. Do this by creating a cylinder object. I’ve created mine using a 2cm diameter and a 0.8cm height. You can also apply a bevel modifier to it. Make sure you sink it slightly into the object it’s attached to. 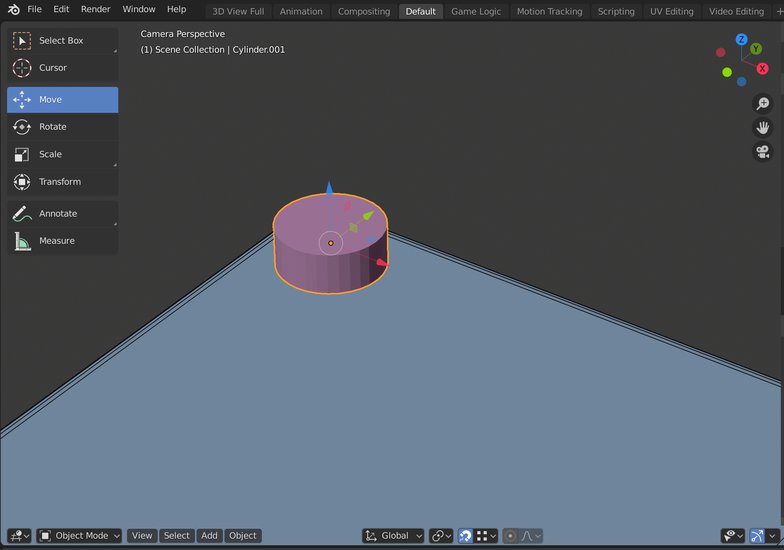 Create the studs on your blocks

With a single stud created you now need to replicate them. The easiest way to do this is using an array modifier. Select your stud, add the modifier and in the properties you will want a relative offset on the x axis of 1.5. You’ll need to create a second array modifier if you’ve got a 2d array of studs like what we have on the top of the head. 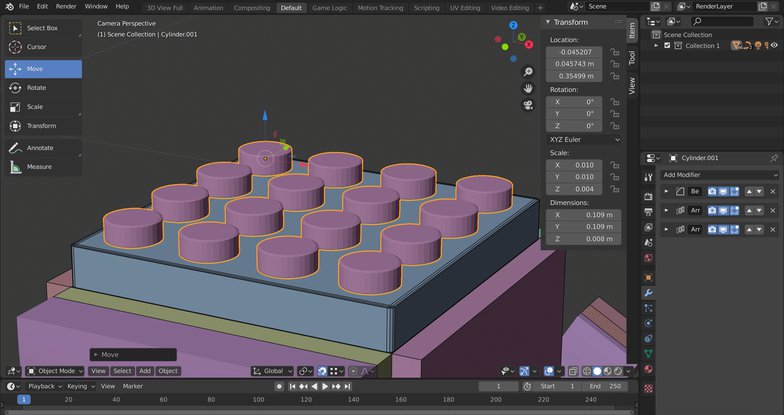 Finish off the detail of your block studs.

Create the rest of the tail - Part 1

In a previous part we created the support for the tail but we didn’t actually create the tail itself. As I knew I’d only be rendering this character from the front I decided to make good use of time and only model what could be seen from my final camera angle. I decided that all I needed to do was create a sphere on the end of the support and then add the three fins onto that. Create a sphere from the add menu, change its size and position it at the end of the support object. 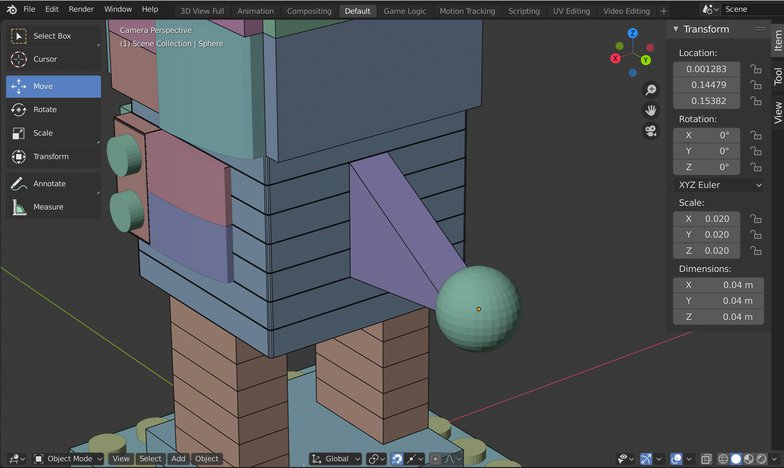 Make a sphere to join the support to the fins

Create the rest of the tail - Part 2

Now it’s time to create the three fins for the tail. This is super easy. I’ve just made use of existing blocks, rectangle and curved, and adjusted them in edit mode by moving the vertices. Create one of the fins, replicate it and rotate it 120-degrees. Do the same again to create the third fin. Why not go freestyle on the design of the fin - Lego models have loads of customized blocks after all anyway. 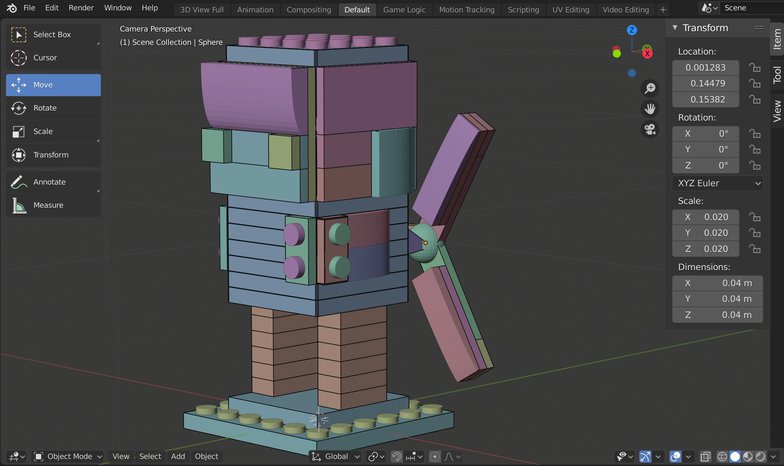 Another thing you’ll want to do to make your model look as natural as possible is to introduce some fine adjustments to the positions of the blocks. If you’ve ever created anything in Lego then you’ll know that blocks don’t always get pushed in 100%. Sometimes they’re even a little bit wonky. Use the move and rotation tools to add variety to your blocks. 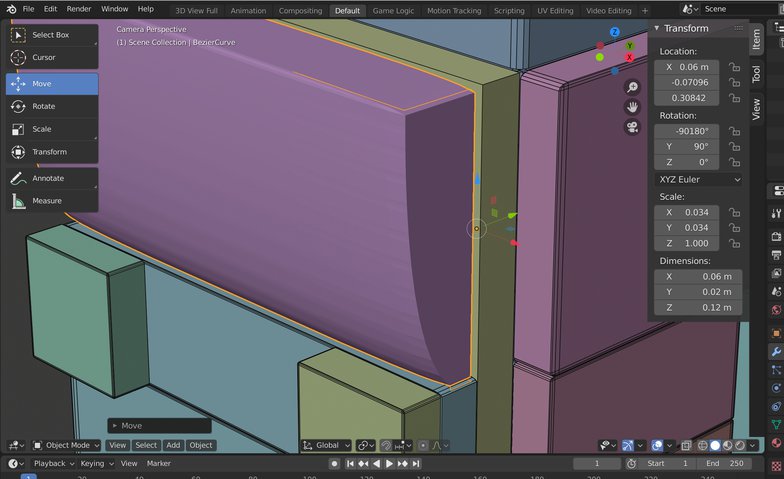 Lego studs have the Lego word/logo written on them. We can do this by using the built in text object in Blender. Simply go to the add menu and select ‘Text’. This will add the text to your scene. Select it and go into Edit mode. You can then change the text that is displayed. Scale and move your text so it is located over one of your studs. 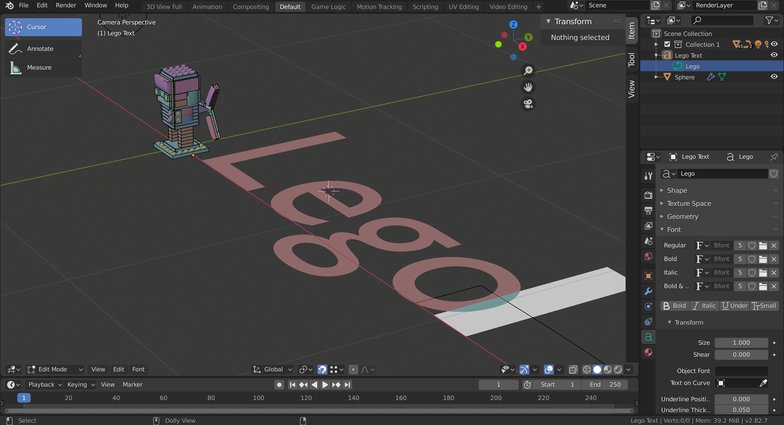 Add text to the studs

The last thing to do with the text is to make it 3d and extrude it. This is built into the properties of the text. Go to the ‘Object Data Properties’ for the object and open up the ‘Geometry’ rollout. Set the ‘Extrude’ property to your desired amount and you’ll see your text pop out! Replicate this to all your other studs either by standard duplication or by using the array modifier. 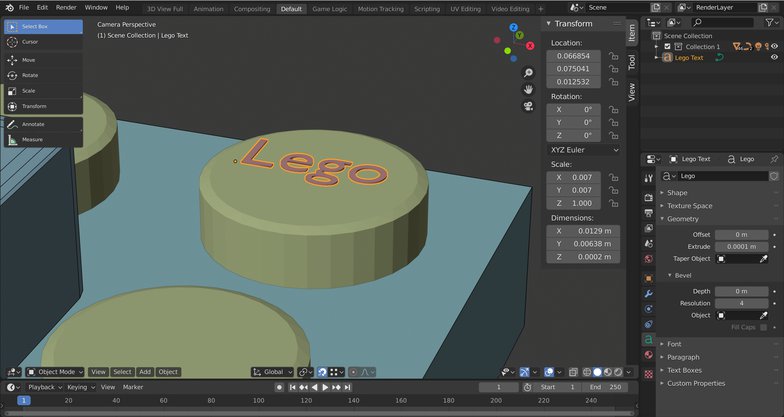 Add text to the studs

And before we finish up with the model why not go ahead and add in a ground plane. When you render the object this will be ideal for bouncing light back up onto the model. 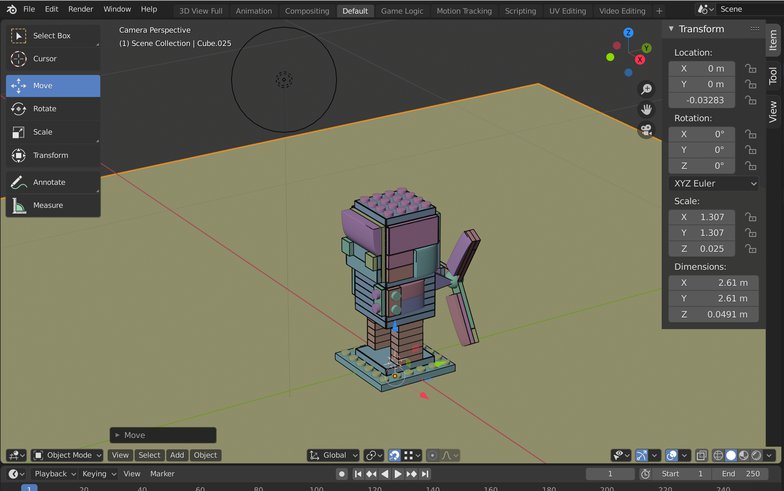 Finish your scene off with a ground plane.

We’ve done it! You’ve got to the end of this Blender modeling series. Through this series you’ve learned to find your way around the Blender interface, create, transform and edit objects, curves and text, keep your scene organized, use modifiers, and a load of other things. As you practice, practice, practice you’ll want to start to build on the things you’ve learned by learning shortcuts to all the tools and operations that you use regularly. This is only the beginning. Now it’s time to bring this guy to life by texturing him up and getting some lights and cameras into the scene. That’s all for another day though!