In this beginner to intermediate series we create a retro looking Iron Man using the free software, Blender. In part 6, we look at advanced modeling techniques and curves…

All image credit as supplied by Paul Hatton

Well we’ve covered quite a lot of ground haven’t we! If you’ve made it this far then you are well on your way to having the sorts of skills that will stand you in good stead to grow as a 3D modeler with Blender. No doubt you’ll need to keep practicing and familiarizing yourself with what we’ve covered but that’s totally normal. In this part of the series we’re going to delve into the advanced world of modeling using curves. Our Lego character has some blocks which are curved so we need to know how to make those. Let’s dive in.

In Blender we have two more types of Blender objects called Curves and Surfaces but in this part we’re only going to cover curves. Let’s try and remember back to those math classes to help us understand what curves are! In essence, a curve is defined by a mathematical function (interpolation). So far we’ve only looked at objects that are defined by linear interpolation between a series of points. One of the advantages of curves compared to polygonal meshes is that curves let us create complex shapes and meshes from a mathematical function rather than defining every part of the mesh explicitly as in polygonal meshes. 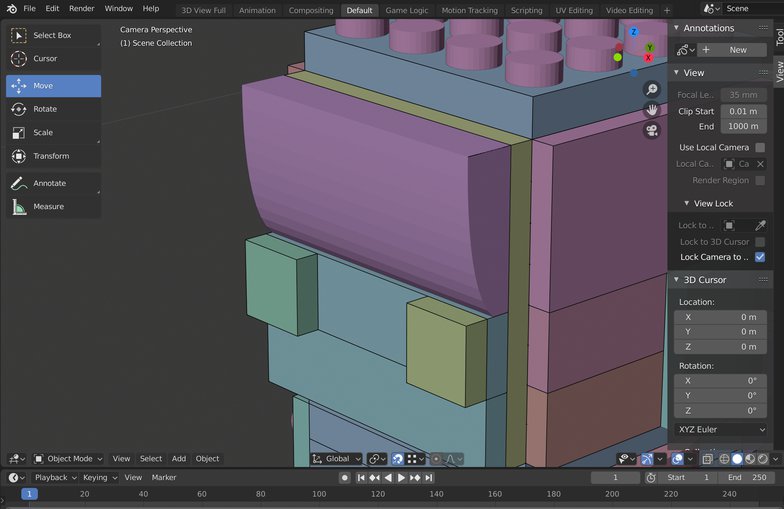 Use curves to create the non-uniform blocks in the Lego character.

Blender offers both. To the user there isn’t a huge difference between the two. Bézier and NURBS curves are both defined by a series of control points/vertices. I’ve always found Bézier curves more intuitive to work with and have never found a need to use NURBS but as you explore, you may feel differently. In this part we’re just going to look at Bézier curves. 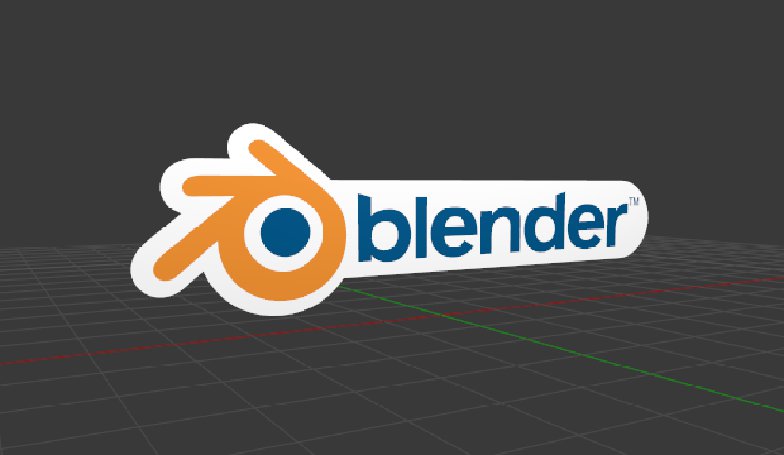 Here is the Blender logo made from Bézier curves

Bézier curves are the most commonly used curves. They are commonly used for creating letters, logos, curved objects and in “animation, both as for objects to move along and as F-Curves to change the properties of objects as a function of time” (Blender Manual). The two key parts of a Bézier curve are the control points and the handles. A segment (the actual curve) is found between two control points. The handles define the way the segment curves. 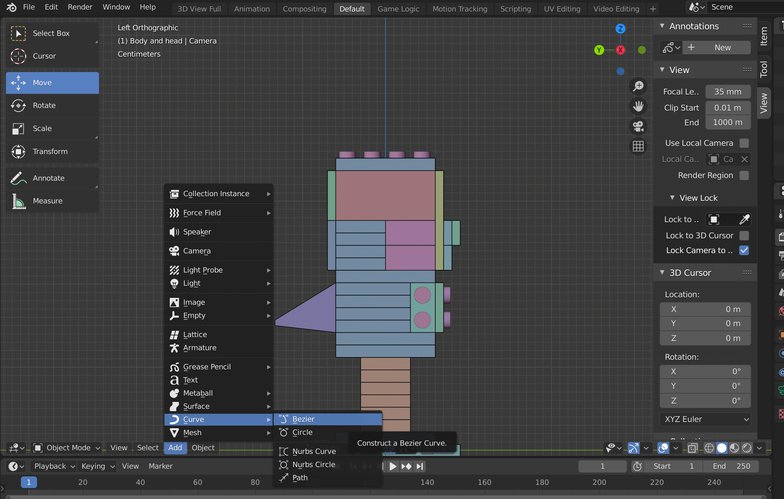 Bézier curves are made up of control points and handles.

After covering some background of curves we’re now ready to actually create something for our Iron Man object! We’re going to create the curved forehead object in this part of the series and then you’ll have all the necessary skills to create all the other curved blocks. You can also use previously attained knowledge of object replication to replicate blocks that are identical on other parts of the character. Hit Shift+A to bring up the add menu and navigate to ‘Curve’ followed by ‘Bézier’. It’ll be added to your scene. If you then go into edit mode you’ll see the control points and the handles appear. 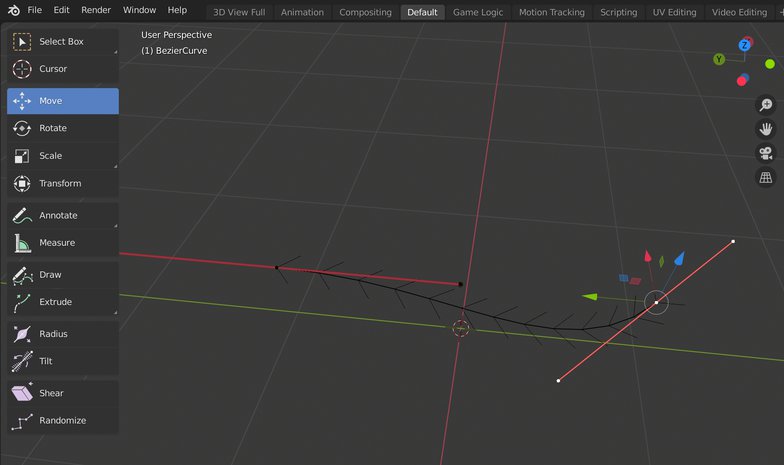 With your curve selected and in edit mode you will now be able to move both your control points and your handles. Select what you want to move and then move it! See how it adjusts the curve and you’ll soon get a feel for it. There are four different types of handle. To change the handle of a control point simply select the control point and press ‘V’ before selecting one from the resulting list. The options are automatic, vector, aligned and free. 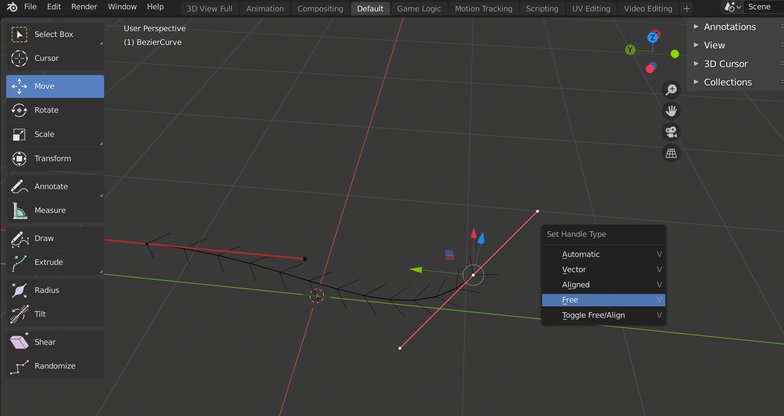 Use the different handle types to control your curve. 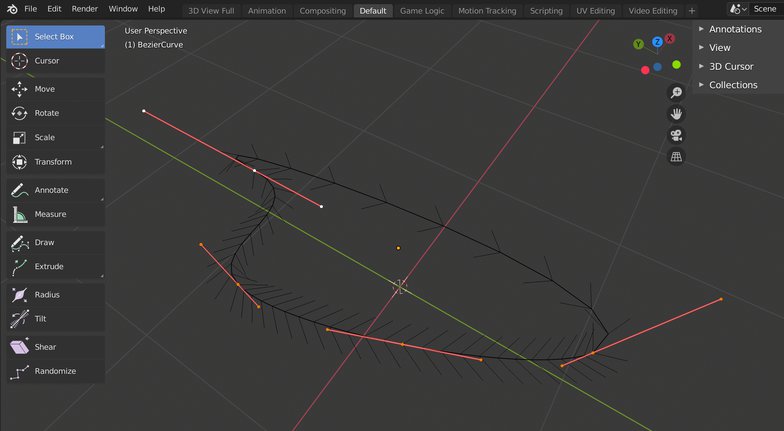 Create a curve with 4 points

We now need to adjust the four handle types and move the control points/ handle types into position to give us the shape that we want for his forehead. Go into the ‘top’ view. Then, move the four control points into the position you want them to finally be in. Use snaps for this and ignore the handles. Set all four handle types to ‘Vector’. You can now edit the ends of each handle independently. For the two handles that define the curve you’ll want to align one end with the straight edge and the other end you’ll want to use to create the curve. Replicate the image for this step if you’re not sure! 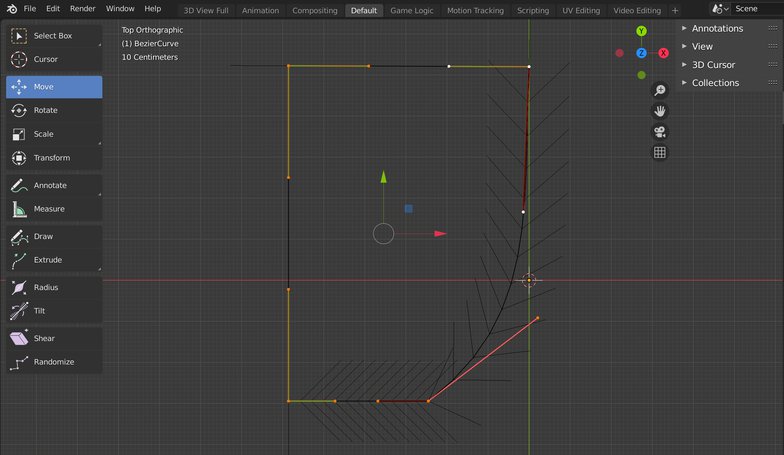 Use handle types to control to shape of your curve.

Convert to vertices and create faces

Now that our curve is the right shape we need to move towards turning it into a 3d object. At this stage you will want to copy your curve and hide the copy. Make sure you do this in ‘Object’ mode. That way we can go back to the curve if we need to. With that done, select your curve and go to the ‘Object’ menu selecting ‘Convert to’ and ‘Mesh from Curve/Meta/Surf/Text’. Go back into edit mode and vertex selection and you’ll see your curve is now made up of a series of vertices. We want to create some faces from those vertices. Before doing that you’ll need to subdivide the long straight edge so it has the same number of vertices as the curved edge. Do this by selecting the two end vertices of that edge, right click and subdivide. Do this until you have the right number of vertices. Then select the four vertices at the top of the object and hit ‘F’. With that done select the new edge and hit ‘F’. Keep doing that to create faces until the whole shape is covered. Each face should be made up of 4 vertices. 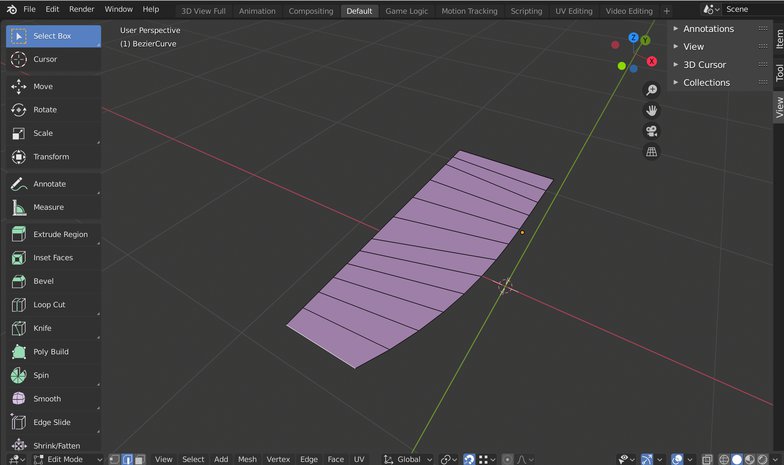 Turn your curve into a mesh.

Well done for making it through the last step! This one is much easier. In edit mode simply select all your faces and hit ‘E’ on the keyboard. If you move your mouse you’ll see the mesh extruding. Either click to end the extrude or type in a number for an exact extrusion. 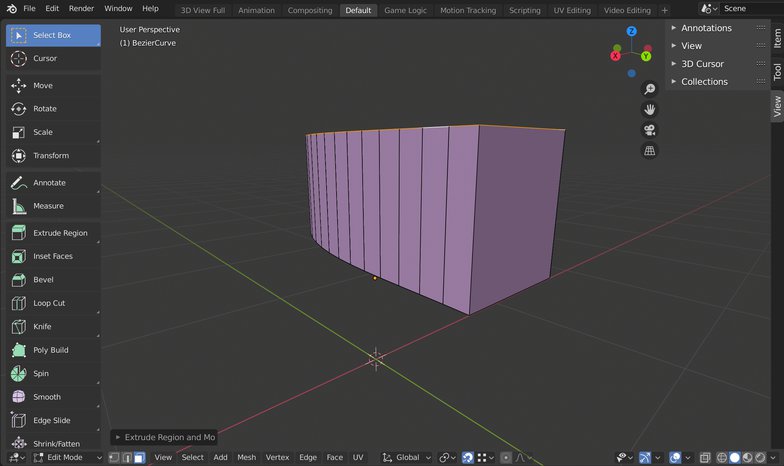 Extrude the mesh to turn it into a 3d object.

Now move the mesh to make sure it’s in the right position. You can either move the object or move the individual vertices, faces or edges to get everything as you want it. You should now be able to create all the curved objects that make up the Lego character. I made good use of duplicating the finished curved blocks as well as duplicating the original curve if I needed a resulting object that was slightly different. 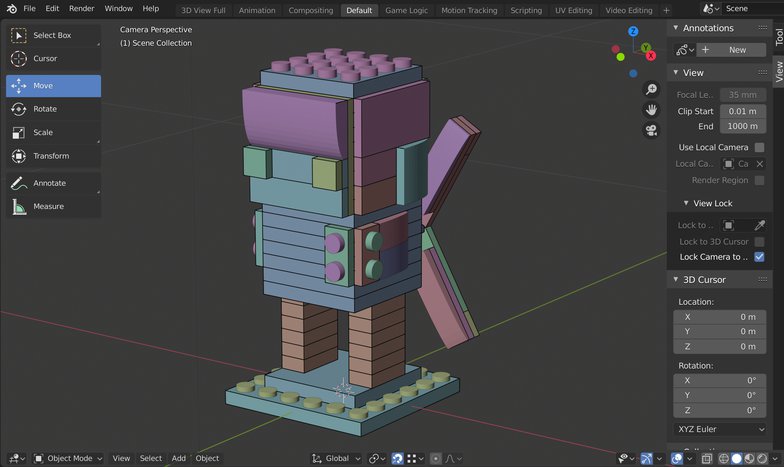 Create all the curved blocks that make up the character.

Curves are so handy when creating complex meshes in the way I’ve shown but you can also extrude your curve profiles along a path rather than just a straight forward extrusion. It’s also important to be aware of the limitations of curves - because the curves are defined by the control points and the handles you may find it hard to create the necessary fine level of detail that you need.