In this beginner to intermediate series we create a retro looking Iron Man using the free software that is Blender, this time looking at scene organization…

Having got some basic object creation and manipulation done it’s a good place to cover some of the basics of scene organization. No groaning allowed! If there’s one thing I’ve learned over the years then it’s the importance of learning to do things properly. We could skip through to all the exciting stuff straight away but then you’ll likely pick up bad habits and it’ll be worse of for you in the long run. Also, if you plan on working within any sort of team context then you’ll be a real asset if you’re able to keep your scenes organized.

The first thing to do is to make sure that your files are named accurately and informatively. I will use the filename with the project name followed by the model name. If I’m working on multiple drafts then I’ll append the filename with a draft number. Between each different part I’ll usually use an underscore to keep details separated. 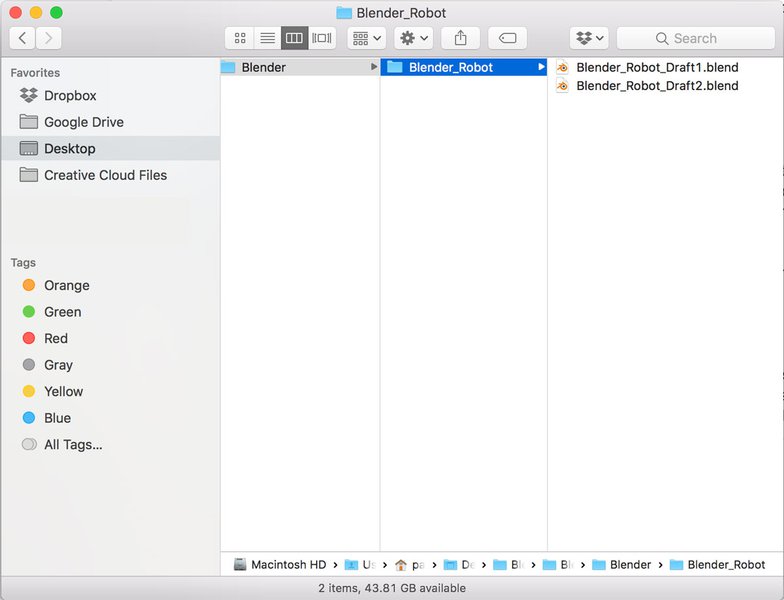 Keep organized as you go

Once you’re inside Blender and creating objects you’ll want to make sure that you keep organized as you go. I know that we’re often working to client’s deadlines and that it can seem quicker and better to just crack on with the work but I can assure you that if you get into good habits then keeping things organized will only slow you down in the short term but across the length of a whole project it will most definitely speed you up. Get in the habit of keeping things organized as you go! 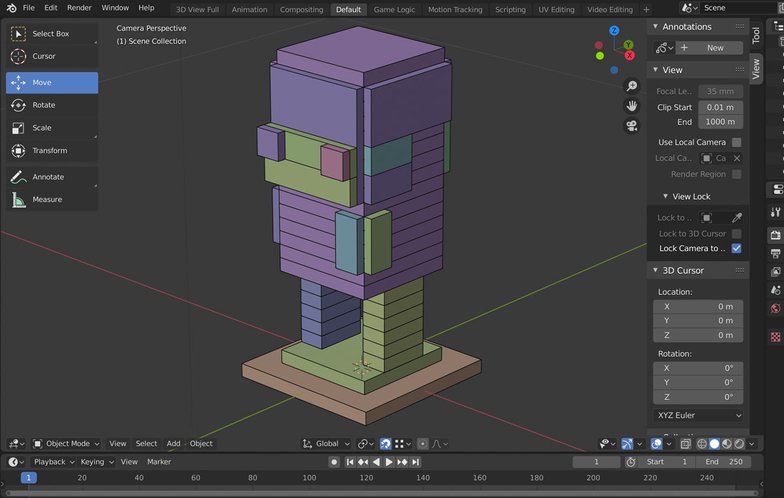 One of the main tools for keeping your scene organized in the ‘Outliner’. You can find it by default in the top right of the interface. The Outliner is a node based representation of the objects in your scene. Each of your objects is listed, by default, in alphabetical order. You can select objects in your 3D view by selecting them in the outliner.

Use the outliner to keep your scene organized and to find your way around complex scenes.

We covered this briefly in part 2 of this series but the Outliner is perfect for naming objects. Simply double click on the object in the Outliner that you want to rename. It’ll select the existing name and then allow you to type in the new name. 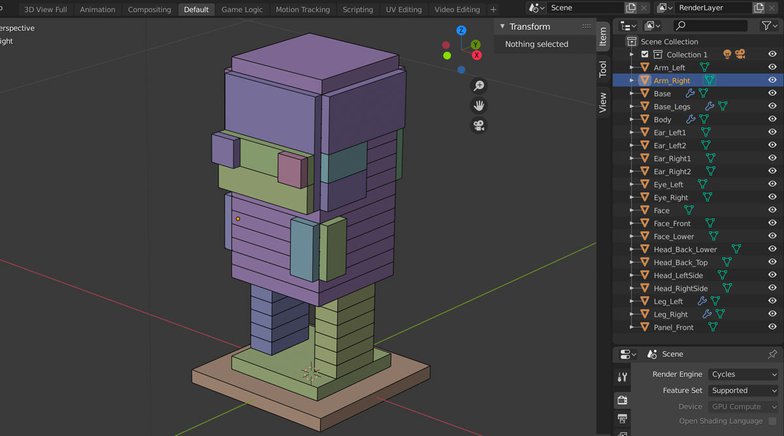 Naming the objects in your scene will enable you to find them quickly when you need them, especially when your scene gets really complex

To the left hand side of your object name you’ll see an orange icon that details what type of object it is. In your scene by default you’ll have a camera and a lamp as well as a cube. The cube has an upside down triangle next to it which tells you that it’s a ‘Data Block’. This is the base unit for any Blender project is the data-block. Examples of data-blocks include: meshes, objects, materials, textures, node trees, scenes, texts, brushes, and even Workspaces. 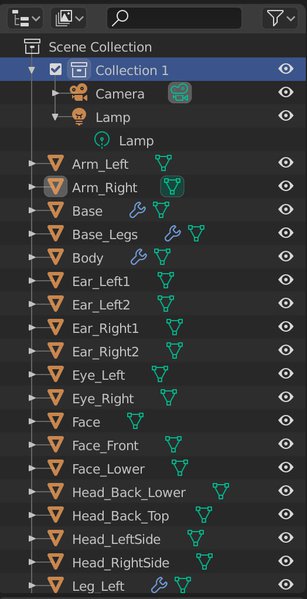 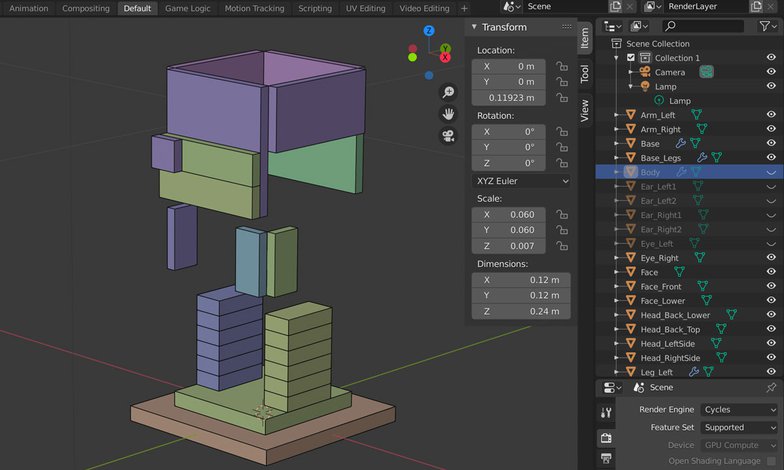 Inside of the Outliner you can create Collections. By default there is a collection which contains both the default camera and the default lamp. At times you’ll want to group objects together in your scene so that they are easier to find or manipulate. Note that objects within a collection don’t have any kind of transformation relationship. To create a collection simply select the objects you want in it and go to the ‘Object’ menu followed by ‘Collection’. Finally select ‘Create Collection’. You can easily move objects in and out of collections in the Outliner by dragging and dropping them. 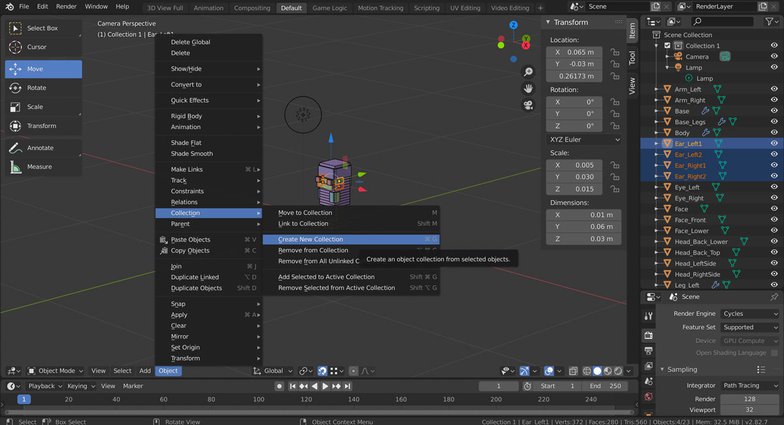 Use collections to keep your objects organized in groups

When creating complex objects with parts that are connected or dependent on one another you’ll want to make use of parenting. This will designate an object as the parent of one or more children. By doing so movement, rotation and scaling of the parent will also affect the children. To set parent-child relations between objects in the Outliner, drop an object onto another object while holding Shift. 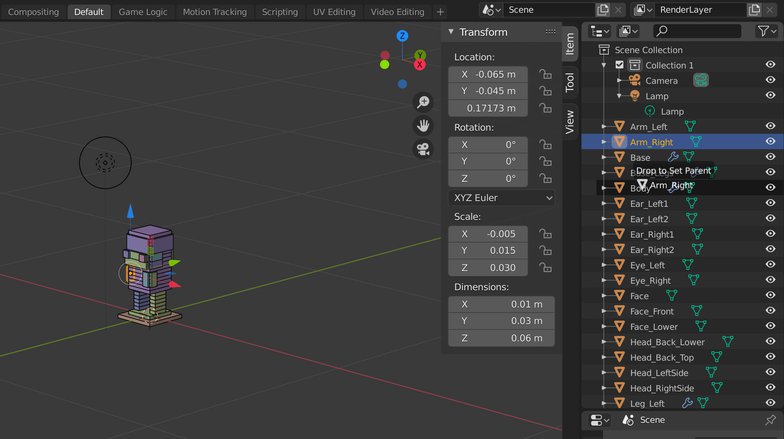 Use the Outliner to create parent-child relationships between objects

All the objects in your scene have an origin point. This point determines where your object is located in 3D space and is important when transforming your objects with the move, rotate and scale tools. The origin is shown as a small circle. Adjust the origin by going to the ‘Object’ menu followed by ‘Set Origin’. There are a variety of options available for setting the origin point. 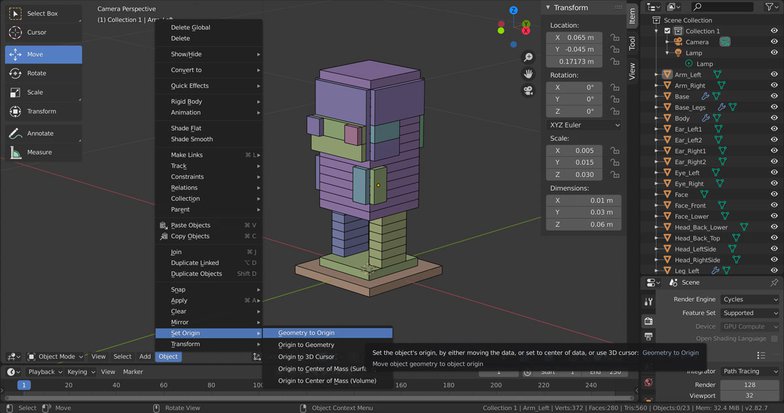 Blender has the ability to bolt on add-ons which extend the built-in functionality. This is really useful because making use of tools that others have developed can help you with specific tasks. Using Blender Nation’s repository of add ons you can find various specific tools that will help you keep your scene organized. Check out the Blender documentation for how to install these add-ons. Add-ons are great for extending the built-in functionality of Blender

There are of course many other ways to keep things organized in your scene and I would encourage you to do find the things that work for you. Whatever things you decide to adopt the key is to stick to them consistently and rigidly! If you keep changing the way you’re doing things then it will be hard to work with others in a team and you might find it hard to work with some of your old files.