In this beginner to intermediate series we create a retro looking Iron Man using the free software that is Blender, taking a closer look at modeling basics…

Now that we’ve got to grips with the basics of Blender’s interface we’re ready to start creating some objects. In this part of the series we’re going to make a start with creating Lego objects, naming them, editing them, and manipulating them as well as a few other tips and tricks along the way.

Start by deleting the default mesh. Do this by hitting ‘X’ and ‘Return’ on your keyboard. We will create another cube but it’s always helpful to know how to delete the default object in case you don’t want that as your starting point. Using the ‘Add’ menu go to ‘Mesh’ and ‘Cube’. This will add a cube to your scene. You can also add a new object by hovering your mouse cursor over the 3D view and using Shift+A. 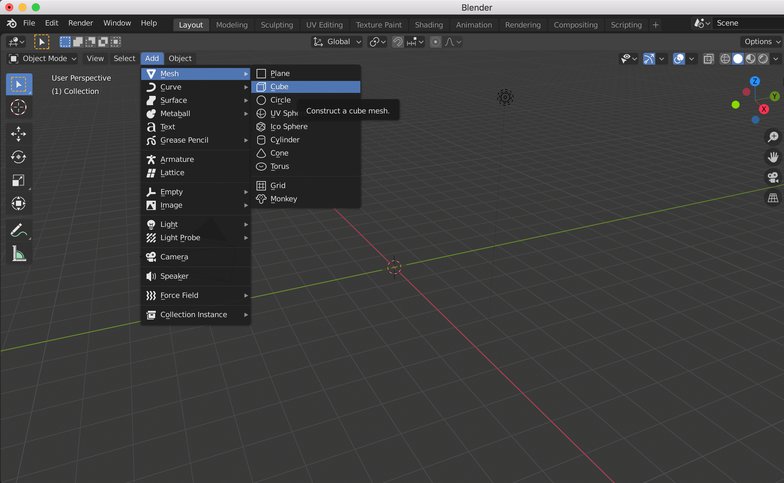 The ‘add’ menu will be one that you use again and again. It’ll therefore be handy to get used to using the shortcut

We’ll make a habit of keeping our scene and objects organised throughout and the first way we can do that is to keep our objects named appropriately. With our cube created head over to the ‘Outliner’ panel and double click where it says ‘cube’. This will highlight the current name and allow you to type in a new name. Call it ‘Base’ and hit return.

A note on dimensions

We’re going to be utilizing some basic and common dimensions for most of our Lego objects. A square brick will be 3cm square and 1.5cm high. The studs on top of bricks will be 2cm diameter and 0.8cm high. On this basis a rectangular brick with two studs will be 3cm wide, 6cm long and 1.5cm high. We’ve utilized a lot of common blocks so that bricks can be duplicated to quickly build up the robot. We’ll create the base and then when you’ve finished all the steps in this part you should be able to create the rest of the basic blocks of the robot by copying the image in part 10. 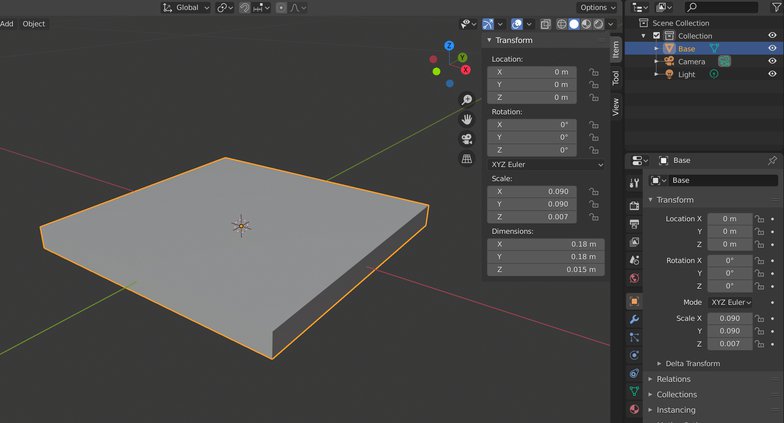 The fun thing about building in Lego is that you only need a few common blocks to be able to then put them together and create something really cool!

The base will have 36 studs in a 6x6 pattern. Based on our dimensions in the previous step that will give us a base that is 18cm square and 1.5cm high. With the base selected go to the ‘Item’ tab and navigate to the ‘Dimensions’ part of the ‘Transform’ section. Your units by default will be in meters so enter 0.18, 0.18, 0.015 into the x, y and z boxes. We will be creating the studs in a later part of this series when we look at the ‘Array’ modifier. 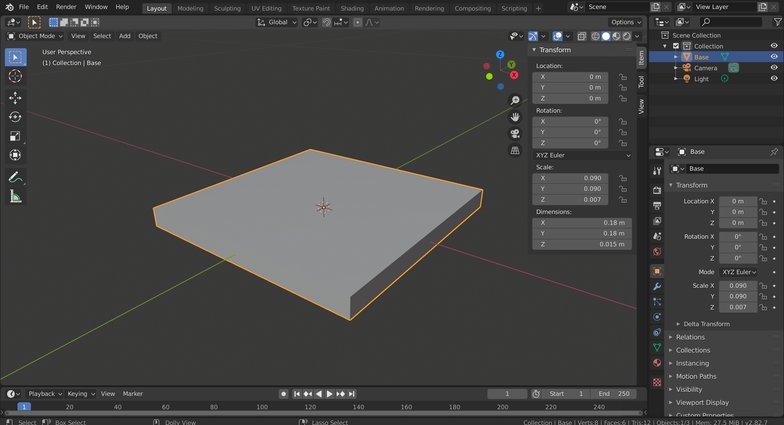 To be able to create the rest of the bricks you’ll need to using the ‘add’ menu as well as utilizing the transformation tools. The first one is the ‘Move’ tool. On the left hand side of Blender you’ll see the transformation tools. Select ‘Move’ and you’ll notice a blue, red and green gizmo appear on your object. This will let you move your object. Simply drag using the arrows to constrain the objects movement to an axis or use the colored square to constrain the object’s movement to two axis. You can also use the shortcut key ‘g’ to select the move tool. When moving an object you can type in a number followed by enter to move the object a specific distance. 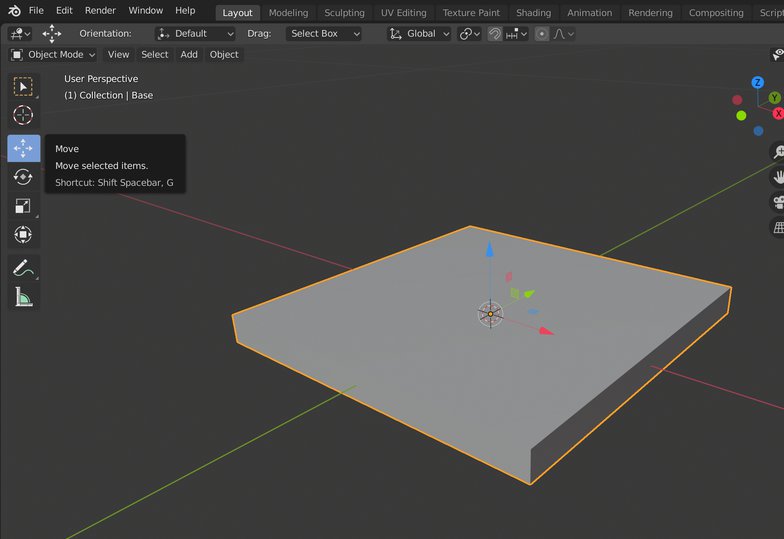 Moving objects around in an efficient manner is a great basic skill to learn.

Having familiarized yourself with the move tool let’s turn our attention to rotating the object. It’s very similar to move. On the left hand side you’ll find the rotation tool. Select it and you’ll see a similarly colored gizmo appear. Use the 3 different circles to constrain rotation to a set axis. Selecting in between these will give you a free rotation. You can also use the shortcut key ‘r’ to enter into rotate mode and like the move tool you can also enter an exact number to specify the rotation degree. 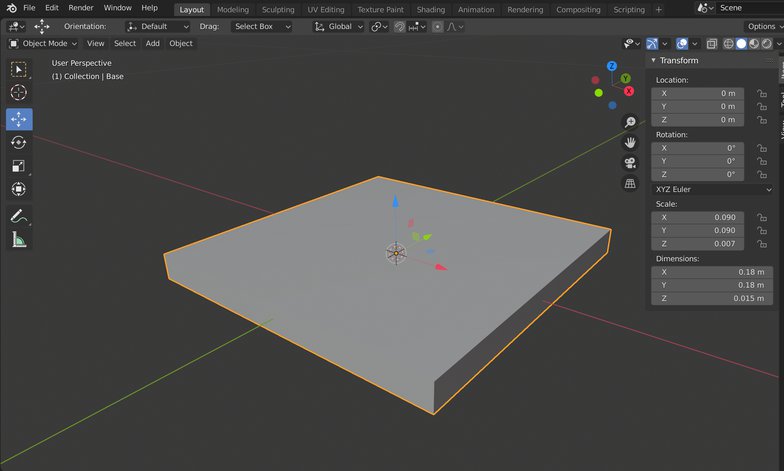 Rotating objects is the second of the key transformation tools

The final transform tool of the main three is the scale tool. This is again on the left hand side and again gives you a similarly coloured gizmo. This time the axis handles are cubes at the end. Constrain the scale in the same ways using the gizmo or enter free scale mode by hitting ‘s’ on the keyboard. Again you can enter a specific number for an exact scale operation. 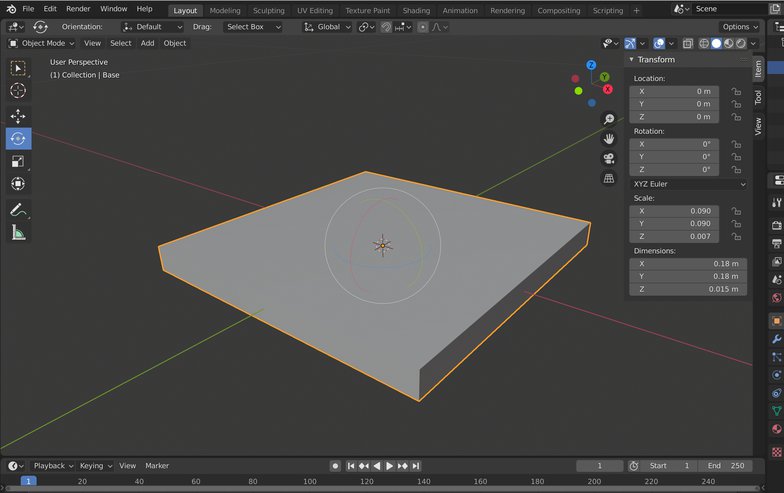 If you would prefer to have all three of the above transform tools in one handy gizmo then the ‘Transform’ tool is exactly what you need. It is again on the left hand side of the Blender interface and will give you access to all three transform gizmos located on top of each other. This is handy if you want to move between tools constantly. 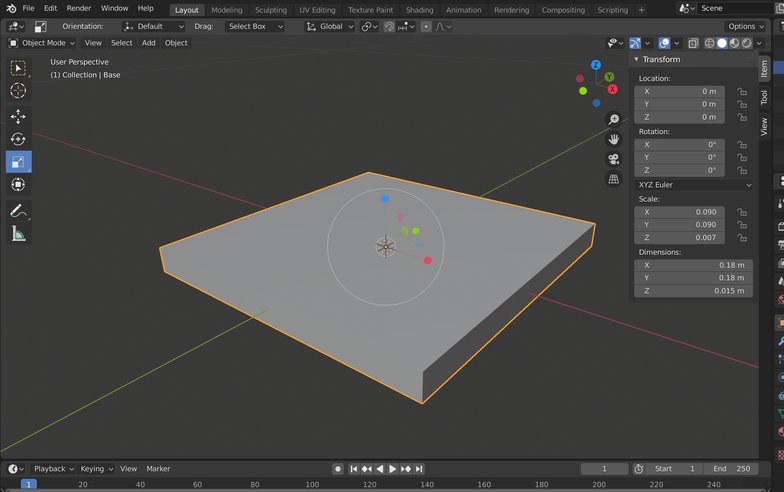 The Transform tool allows you to move, rotate and scale using a single gizmo

There are a few different ways to select your objects. By default it is set to ‘Tweak’ which lets you select objects directly but there are three other selection options that allow you to more easily select multiple objects. These are called ‘Box’, ‘Circle’ and ‘Lasso’. You can find them using the left hand side menu. Select your preferred option and then drag and deselect your cursor in the 3D view. 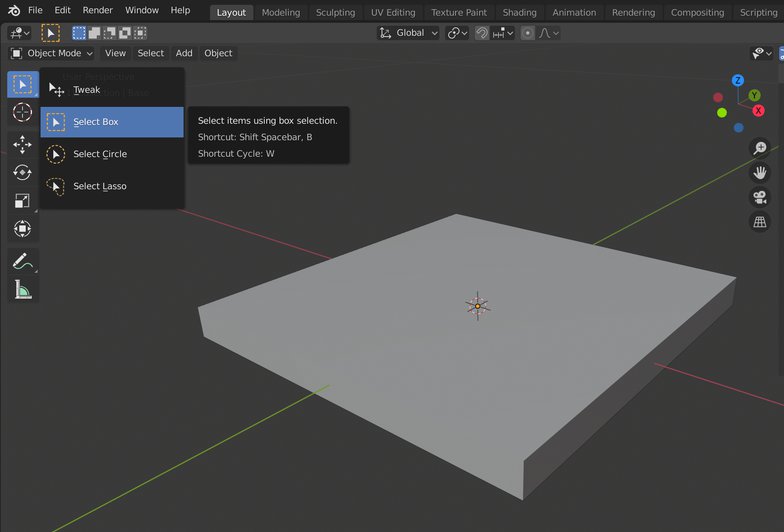 The final thing to look at that will complete the tools you need to put together the basic bricks of the robot is the duplicate tool. Duplicating objects is key to speeding up your modeling process. Later in this series we will look at creating arrays of objects which will speed up object creation even further. For now we’ll look at duplicating objects only. To do this simply select and object and use the Shift+D. You’ll see a new object appear in the viewport. You can move it into your new location either freely or by selecting x,y or z on your keyboard to constrain the object to any of those axis. Note that these objects are in no way linked. Use the Alt+D shortcut to create a linked duplicate. By doing this all of the data of the original object will be linked to the new one. 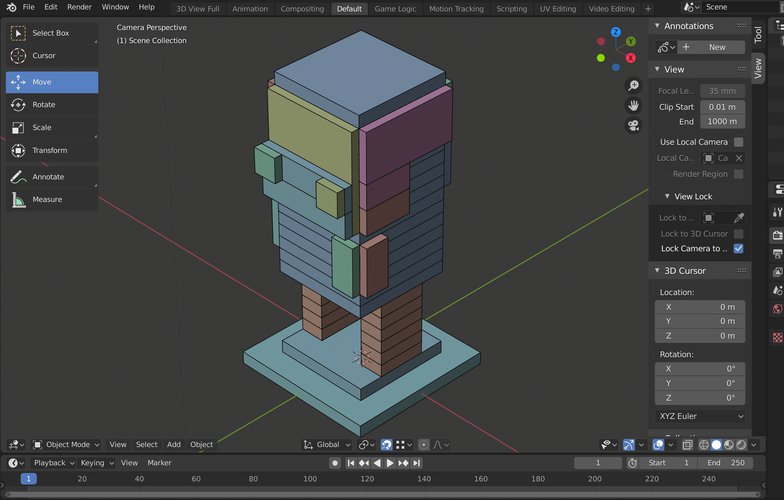 Duplicate objects to speed up the modeling process

In this part we have covered the basics of object creation and manipulation. We started by creating a basic base with no studs and outlined the dimensions that we were going to be using for bricks and studs. With this information and the tools covered in this part you should now be able to create a basic looking robot as per the image in part 10. Have a go and don’t give up! Remember that practice makes practice easier!