Building Iron Man out of Lego in Blender Part 11 - Rendering

In this beginner to intermediate series we create a retro looking Iron Man using the free software that is Blender.

You’ve nearly made it. Now we get to create some pretty pictures! Rendering is the process of translating your model, textures, lighting and camera properties into an image. This could be a single image or multiple images to create a video. The speed of your rendering will be dependent upon your render settings as well as the hardware that you’ve got in your computer. I have a bit of a love hate relationship with rendering. It enables me to create images I’m proud of but boy can it be frustrating when things are taking ages to process. Let’s take a look at some of the basics of rendering and bring our Iron Man Lego figure to life!

The first thing to say is that there is a difference between seeing your render within the viewport and creating a final render. Viewport rendering works by giving you a relatively crude idea of what your final render is going to look like. It starts off really grainy but as render samples are added to the scenes it gradually gets better. We’ll discuss the different render engines available in a later step. 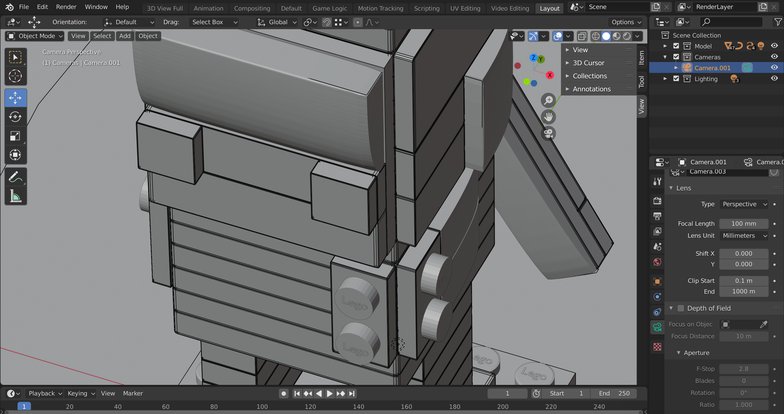 Use viewport rendering to give you a quick idea of what your final render is going to look like.

To see how your materials and lighting interact with one another inside your viewport you can set the Viewport Shading Mode to Rendered. You can do this using the icons in the top right of the viewport or alternatively use the shortcut key ‘Z’ and choose the ‘Rendered’ option. 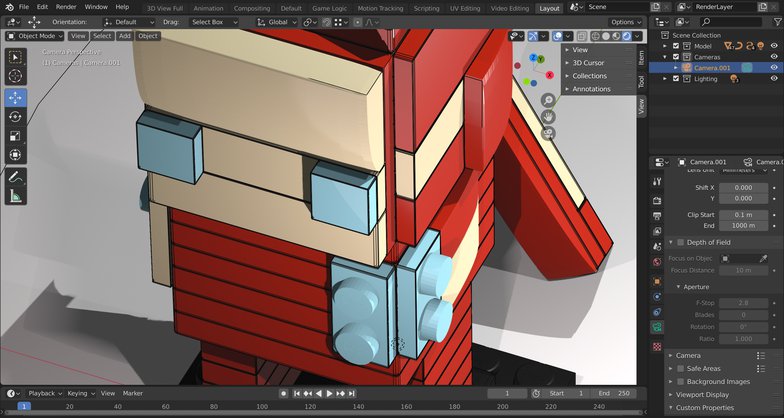 See your rendered model right inside your viewport.

There are two main render engines within Blender and they are called Eevee and Cycles. You can change between the two of them in the render properties panel. Eevee is a real time rendering engine and has evolved in recent times to be able to handle many of the complexities of a fully featured render engine. One of the main things you’ll notice is that Eevee is quick! Cycles on the other hand is what’s called an unbiased render engine. It calculates everything from the light to the shadows physically accurately and therefore provides accurate results. It does however take longer to create a ‘clean’ looking render. Both engines can be used within the viewport.

Eevee and Cycles are the two main render engines in Blender.

Let’s now move on to final rendering and creating a high-quality image of our model. With our view looking through our chosen camera simply hit F12 or go to the ‘Render’ menu at the top and select ‘Render Image’. Up will pop a new window which will contain your rendering. Depending on the complexity of your scene, your settings and your hardware your rendering could take a little bit of time to complete. Press ESC at any time to cancel your rendering part way through. 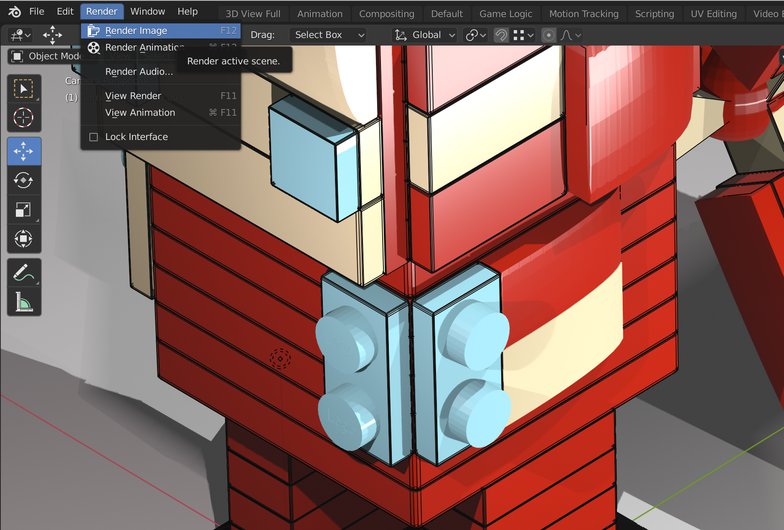 Having hit ‘Render Image’ you’ll see the render window appear and your render begin to be processed. The render window contains a few extra menus and buttons. I just want to draw your attention to the ‘View’ and ‘Image’. The view menu gives you a tonne of options for viewing your render as well as some options for only rendering a region of the image – something we’ll come to later. The Image menu gives you options to open and save your images. 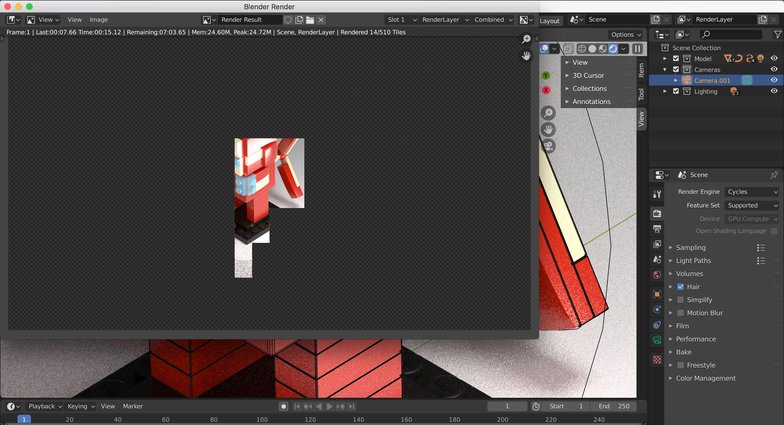 The render window is what enables you to view your render.

In the Output properties panel you’ll find options for setting the number of pixels that make up your image. There are separate settings for both the x (width) and y (height). The larger these numbers the longer your render will take to process. There is also a percentage property if you wanted to quickly reduce or increase your resolution by a fixed percentage. This can be quite useful if you wanted to create a simple draft image at a lower resolution. 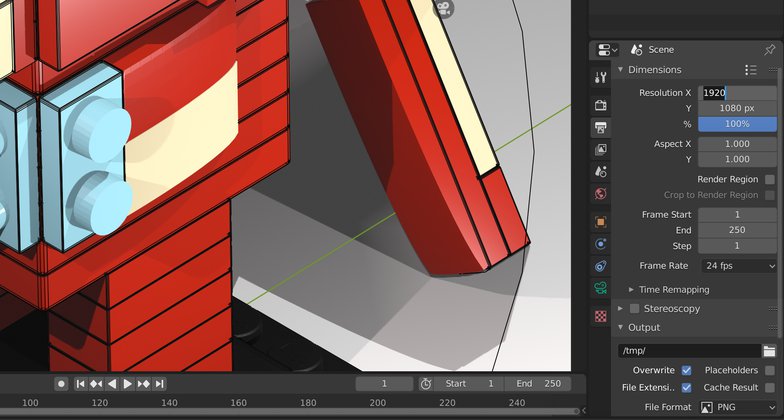 Set the resolution of your image using the output properties.

Once your image has finished rendering you can save it to a file by going to ‘Image’ and ‘Save As’ or alternatively use the Shift+S shortcut. This will then bring up a dialogue box which lets you set the location of the file to be saved and the filename. It also gives you options such as the file type format on the right-hand side. 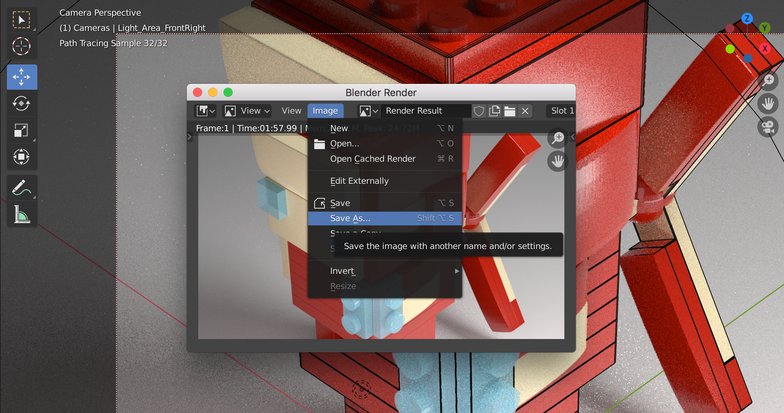 There are times when you will want to only render a small region of your overall image. This is particularly useful if you’re testing your material/lighting/render settings and want to see its impact only on a particular area. To set the render region simply go to the ‘View’ menu and select ‘Render Region’ or use the shortcut Ctrl+B. Finally drag a marquee selection and hit render. The render region can also be cleared using the View menu.

Use region rendering to specify what gets rendered and what doesn’t.

One thing that really affects render times is sampling. Sampling is what is used in a raytraced render engine to determine the amount of work that is put in to calculating things like materials and lights. The more samples you have the cleaner your final render will be. Sampling can be found in your render properties panel. The number of samples can be set using the ‘Render’ property.

The number of samples determine the quality and cleanness of your renderings.

Following on from the previous note about sampling you can change the type from standard path tracing to Branched Path Tracing. The second option will give you more control over the number of samples that are used in different calculations. For example, if you’ve got load of noise in the glossy reflections then you can up the number of samples devoted to those.

Use Branched Path Tracing to get more control over your sampling.

You should now be well placed to create renders in Blender! At this stage you can obviously adjust your camera views, the properties of your materials and lights as well as your render settings to get the render that you envisaged. We’ve got one last part of this series and that’s post production – the taking of our render into a photo-editing program and making it even better than it already is!

Read the other parts to this 12 part tutorial