In this beginner to intermediate series we create a retro looking Iron Man using the free software that is Blender.

Now we’re getting really close to creating our final renders! After completing the modelling we’ve covered materials and lighting. In this part we’re going to look at cameras in Blender before moving onto rendering in the next part. The final part after that will be post-production and will involve taking our renders to the next level with photo-editing software. Let’s get started with camera creation.

We use cameras as portals through which we see and render our scene. You can create a camera in your scene by using the add menu. You’ll see the camera appear in your scene as well as in your Outliner. This camera can then be moved around in the scene in the same way that you would move any other object. 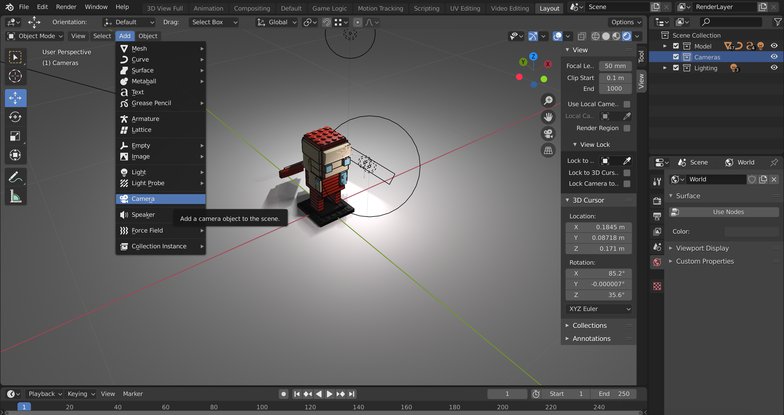 Create a camera as a portal into your scene.

Create a camera from view

The way that I prefer to work though is to move around in my viewport until I’ve got the view that I want and then create a camera from that view. You can do that using the shortcut “Ctrl+Alt+Numpad0”. Doing it this way gives you freedom to be able to move around your scene freely until you find a view you like. Don’t worry you can change this view after you’ve created the camera but it’s a good starting point. 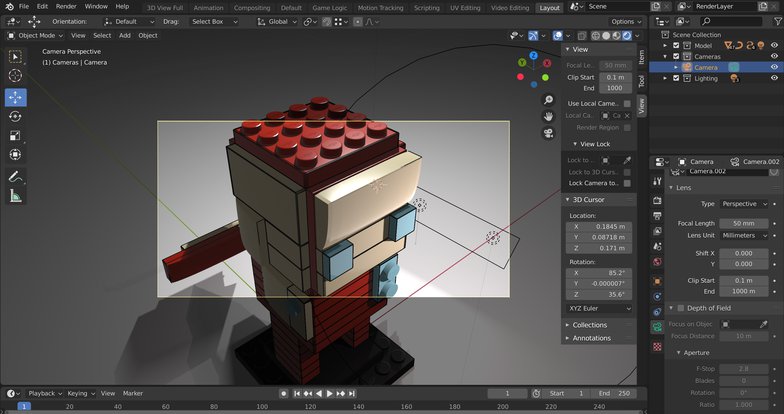 Create a camera from the view you’ve navigated to.

Look through the camera

If you created the camera using the first way then you won’t be looking through the lens of the camera. This is easily achieved by either using Numpad+0 or using the camera icon in the top right corner of the viewport. If you have multiple cameras in your scene then this will set your view to be through what’s called the Active Camera. The next step covers how to change the active camera. 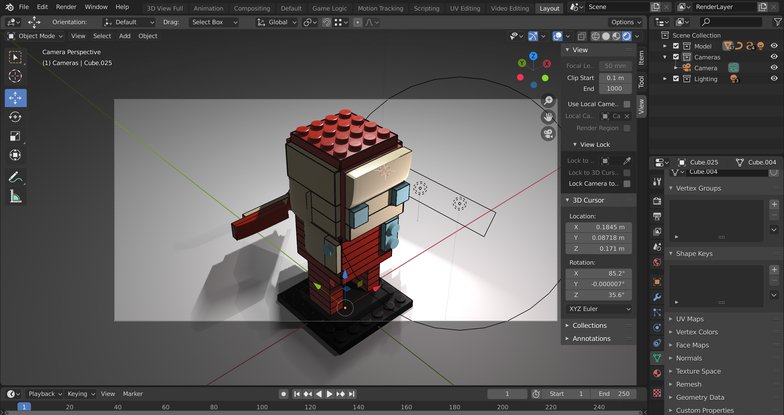 Look through the lens of your camera to know exactly what its view is. 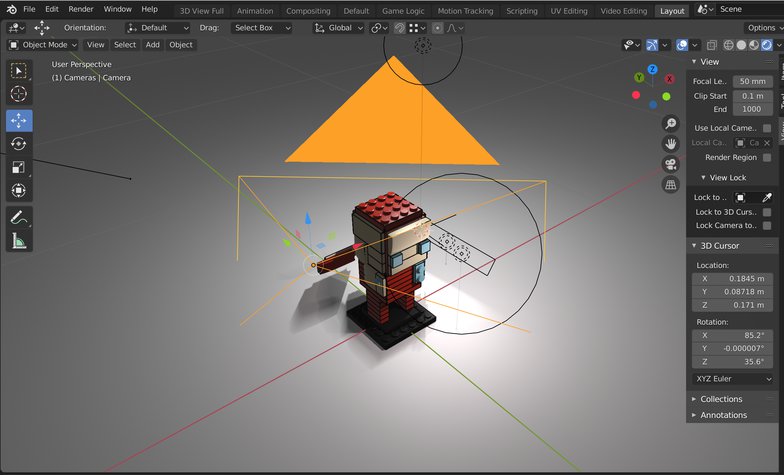 Change the active camera in your scene

As mentioned previously the camera object can be moved in your viewport using the move and rotate tools. Potentially a better way of doing it is to go into your camera view and to move it in there. This can be done by clicking the ‘G’ key and then moving. You can zoom in and out by pushing the middle mouse button once and then zooming in and out. Personally, I find this so clunky and counter-intuitive so I’ll share a much easier way of moving your camera view in the next step. 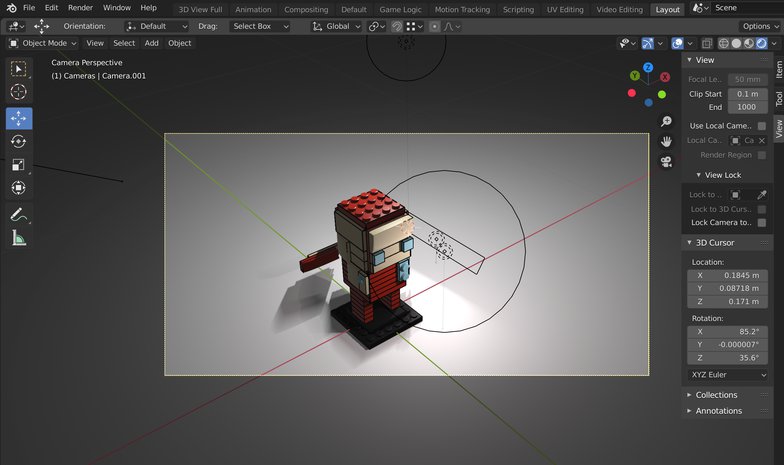 Move your camera to get your view just right

Locking your camera to the view

The more intuitive way of transforming the view of your camera is to look through the camera and then to use the viewport navigation tools. This can be achieved really easily by going into the ‘View’ tab on the right-hand side and ticking the checkbox which says ‘Lock Camera to View’. Now the camera will perform in the way you expect it to.

Lock your camera to the view so that you can transform the camera with the intuitive tools.

With your camera selected we’re now going to check out the properties of the camera. You can find the camera properties panel in the same place as all the other panels such as materials and lights in the bottom right corner of the interface. The first setting in the properties panel is the camera ‘Type’. There are three options: Perspective, Orthographic and Panoramic. Most of the time you’ll use the perspective camera type and it’s set to that by default. The Orthographic type means that objects always display at their actual size, no matter the distance from the camera. The Panoramic type will create a panoramic view. 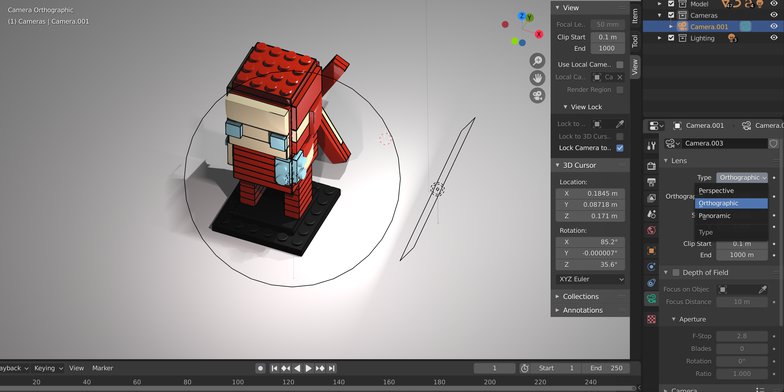 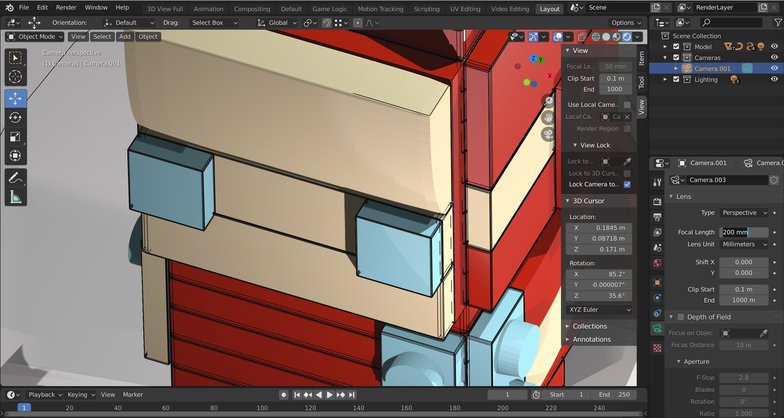 Adjust the focal length to change the width of the view

Depth of field is great for adding a cinematic look and feel to your renders and it also focuses the viewer’s attention on a particular part of your scene. Adding depth of field as simple as ticking the checkbox ‘Depth of Field’ in the Camera Properties Panel. Assuming you’re in render viewport shading mode you should see the effect appear in your viewport. To focus in on a particular object in your scene you can use the property ‘Focus on object’ and either select from the list or use the picker. 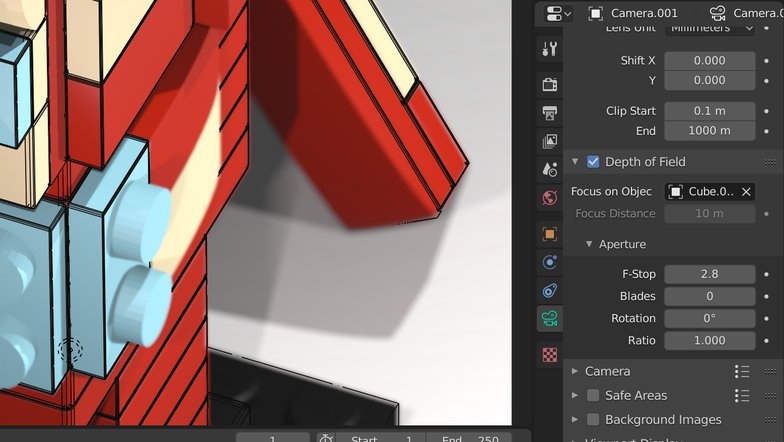 To control the amount of your scene that is in focus you’ll need to adjust the ‘F-Stop’ property. This is also known in the camera world as the f-number and it adjusts how much light enters into the camera. In Blender world it has no effect on the exposure though and only changes the depth of field effect. The lower the f-stop the narrower the depth of field.

Depth of field adds a beautiful cinematic quality to your renderings.

In this part we’ve covered all the basics of getting a camera set up as well as how to change them and practically use them. There are a number of more advanced features related to cameras but they are outside the scope of this tutorial. Having now covered materials, lighting and cameras we’ll move on to setting up our renders in the next part.