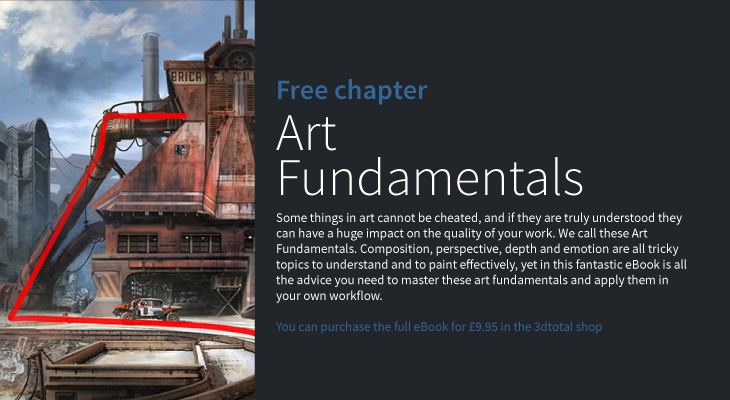 Composition is the first word on the best artists' lips when they start an image. But what is composition? It's basically the layout of elements and a visual vocabulary that leads your eyes around an image and makes it interesting. It's the first crucial step in making your image interesting from the get go. No detail, fancy colors, lighting or action will substitute composition. Even though composition theory has rules that have been used for hundreds of years, you can always find new and interesting ways to apply them to your compositions. Try to think outside of the box. I'm going to take you through a quick guide into composition and see where it leads us, and what we discover along the way. 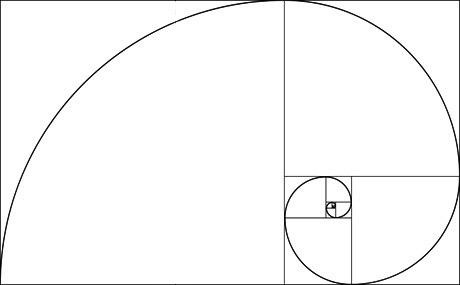 Derived from the golden rectangle is the Rule of Thirds, which was adapted to cope with a wider range of aspect ratios. By dividing you frame into three equal parts from each side you create four power points where the lines intersect each other (Fig.02). For example, the image "Under A Rock" uses the principles of the rule of thirds, by having the converging lines create focal points. You can see the main focal point is the building (A). Then I added secondary focus points near the converging lines: the windmill farm in the far background (D) and the actual rock structure, which has a great deal of importance in the concept and which runs along two other intersections (B and C).

If you have a vertical frame, the rule of thirds can also be applied. In the image "Queen of Candasce" I placed the flying ship very close to the converging line (Fig.03). 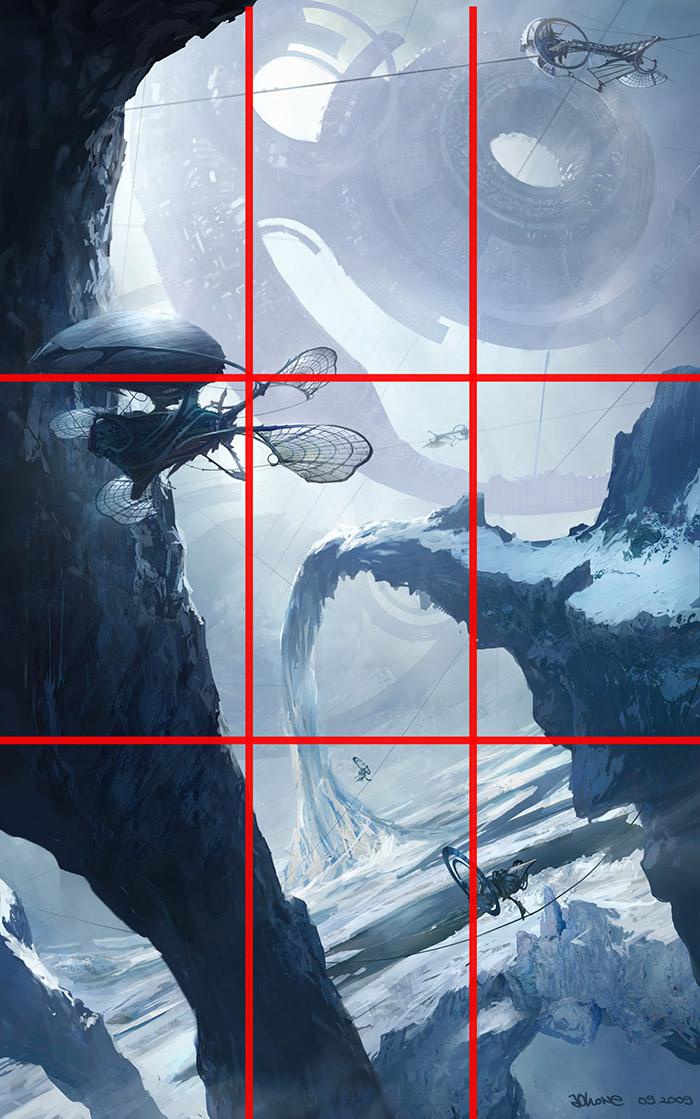 Your main focal point should not always be on the intersection of the power lines. When considering your composition remember that contrast is important. It helps you to make areas stand out even though they may not be near a power point.

Contrast can be achieved in many ways. The easiest is light and dark, followed by material contrast, contrast of hue or saturation, tension or balance and contrast of shapes, round or square etc. In Fig.03 I kept the ship and huge structure close to the power points because, from a story standpoint, it was very important to show the direct connection between them. Then for the lower power points I left the environment where the action takes place.

Another easy trick I used in this image, which can be used for any aspect ratio, is provide a big foreground. Because we are used to reading from left to right, this pulls the viewer in and leads the eye more easily into the image providing a grounding point for the whole frame.

This leads to another simple composition trick, which can result in very beautiful images and that is very commonly used on book covers (Fig.04). It's based on having a frame for your image - in this case a big L - that leaves the rest of the image in focus and easy to see. It's a great and easy way to make things stand out and can help give monumentality to your image. 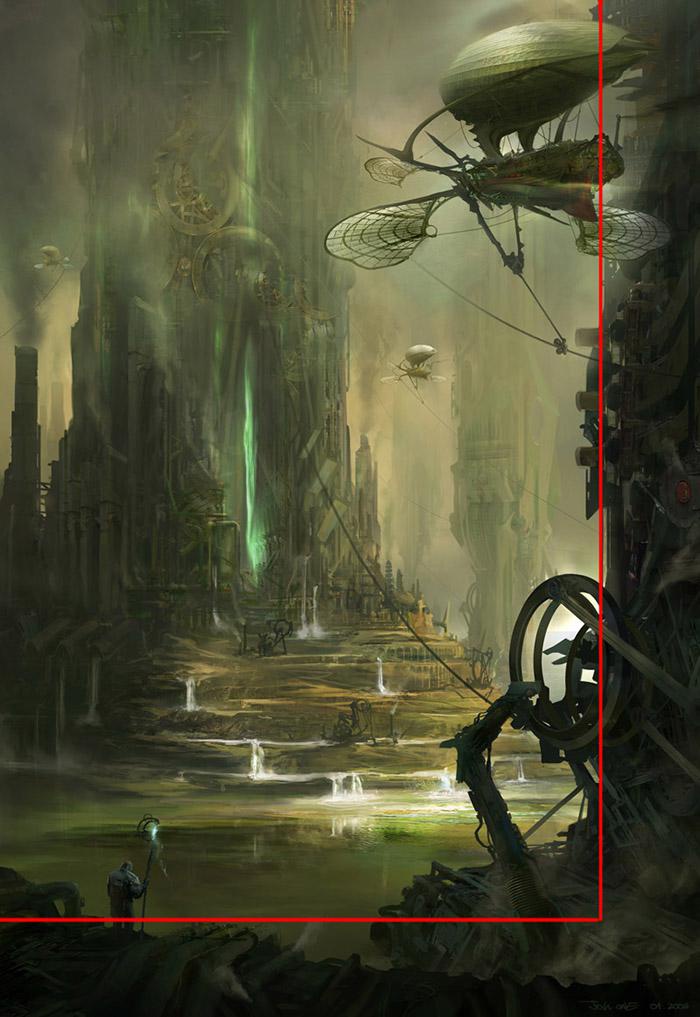 When using this rule, make sure you don't fall into a trap and follow it exactly. This can make your images boring and dull. Keep to the grid at first, but get rid of it as soon as possible so you don't start to repeat a few generic compositions.

In composition even a small change can have a great effect on the final image. Changes such as tilting your horizon line are a great way of making your image look more dynamic. In Fig.05 – 06 the story was all about suspense, thrills and action. So tilting the horizon made all the difference; it adds more narrative to the image and depicts drama and action, which gets different reactions from the viewer. 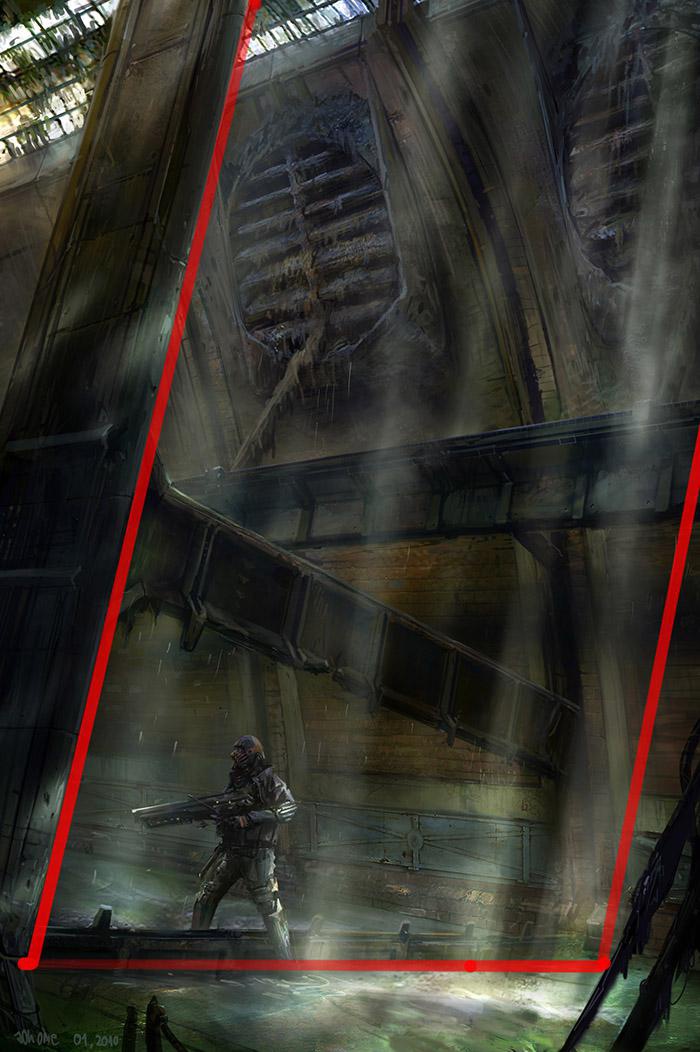 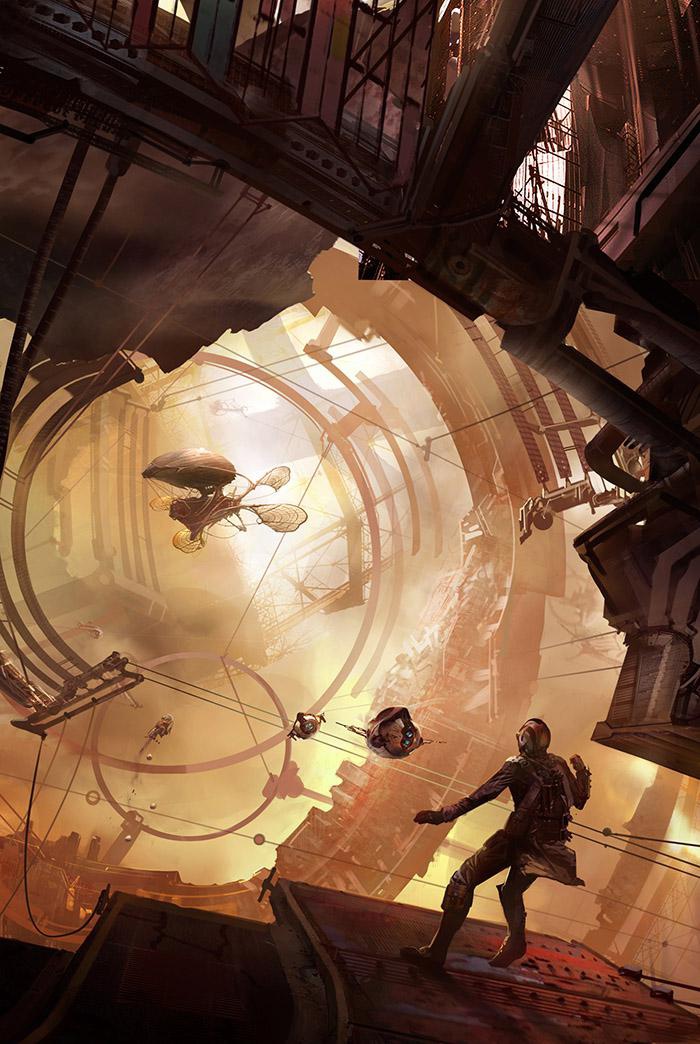 Simple compositions can sometimes be the most effective. Sometimes less is more (Fig.07). For example you can use your perspective to lead the viewer into the picture and directly to your focal point. Now the power lines are your perspective lines. Use whatever objects you have in your scene to point at the focal point. You can also use a technique used in films, paintings and photography vignetting, which is basically darkening the edges and corners of your image so that the eye doesn't escape. It's very effective when dealing with quick sketches among other things.

Another quick and effective composition technique is basically having your image layout follow certain shapes, like a circle, cross, square, triangle, oval etc. By repeating those shapes to create a rhythm and a hierarchy in your image, it holds your eye inside those shapes and leads it more directly to a payoff spot.

In Fig.08 I used ovals to create a spiraling effect leading to the train, which is the focal point of the image, but I made sure I included the train stop as well. It made the image more dynamic and gave a sense of movement to the train. 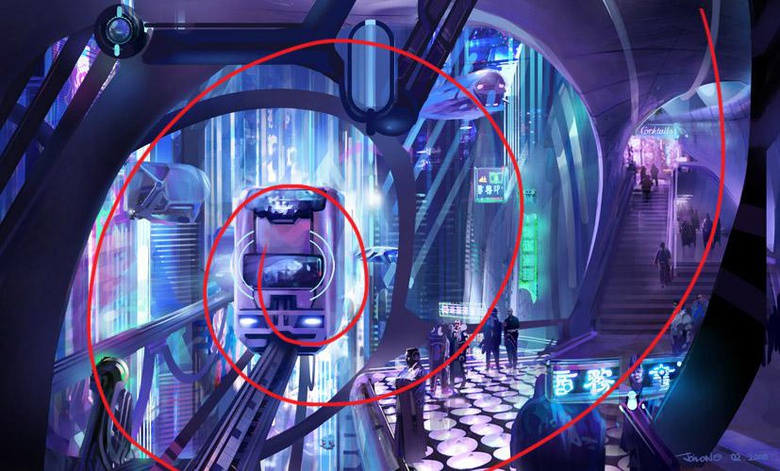 For Fig.09 I used a composition technique that is very common in the work of Frank Frazetta and that is basically a cross, with the hero on top of a pile. Placing the camera so it is looking up at the victorious heroes helps to convey the story better. Even though the composition might seem split by the wreckage between them, it's because this was part of the story - to show tension between them. 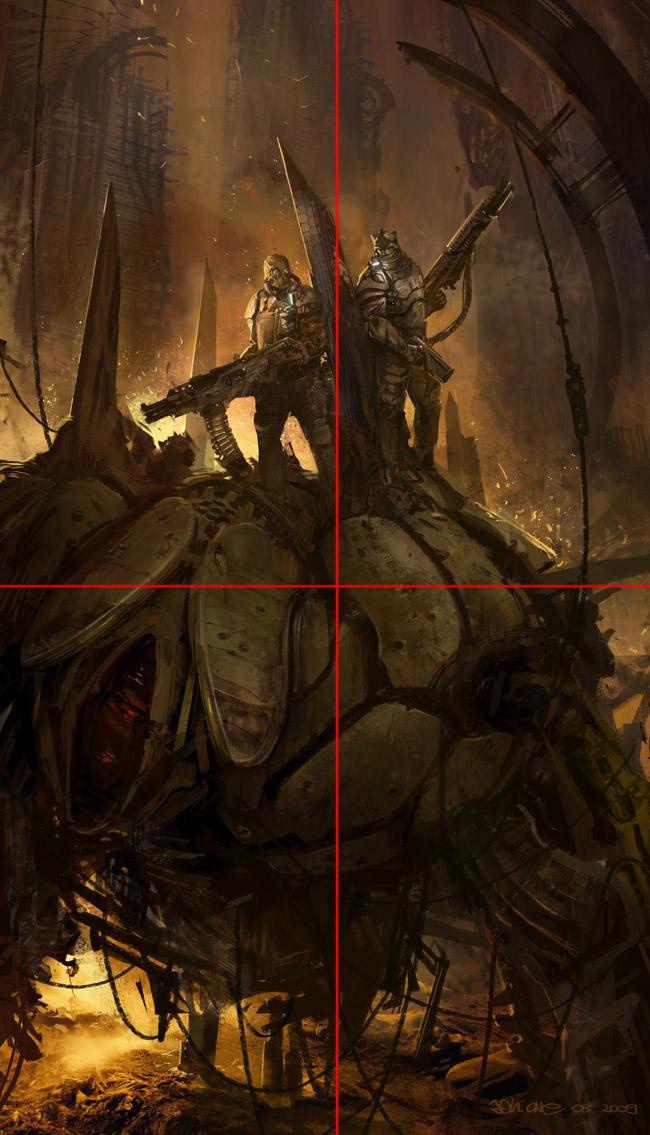 This was actually a tutorial for 2DArtist, using a 3D base to paint over. Here I used a combination of the implied shapes, triangles and perspective. They keep the eye flowing along their edges very nicely until the payoff spot at the end of the hangar (Fig.10). 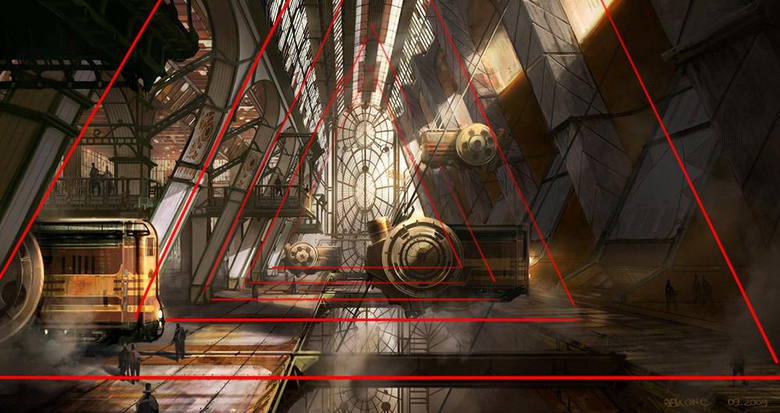 This image uses radial power lines converging to one point, which makes the image menacing and intimidating (Fig.11). For storytelling purposes I brought in a circle shape, which becomes the second read and contrasts the hard edges of the huge structure in the background. 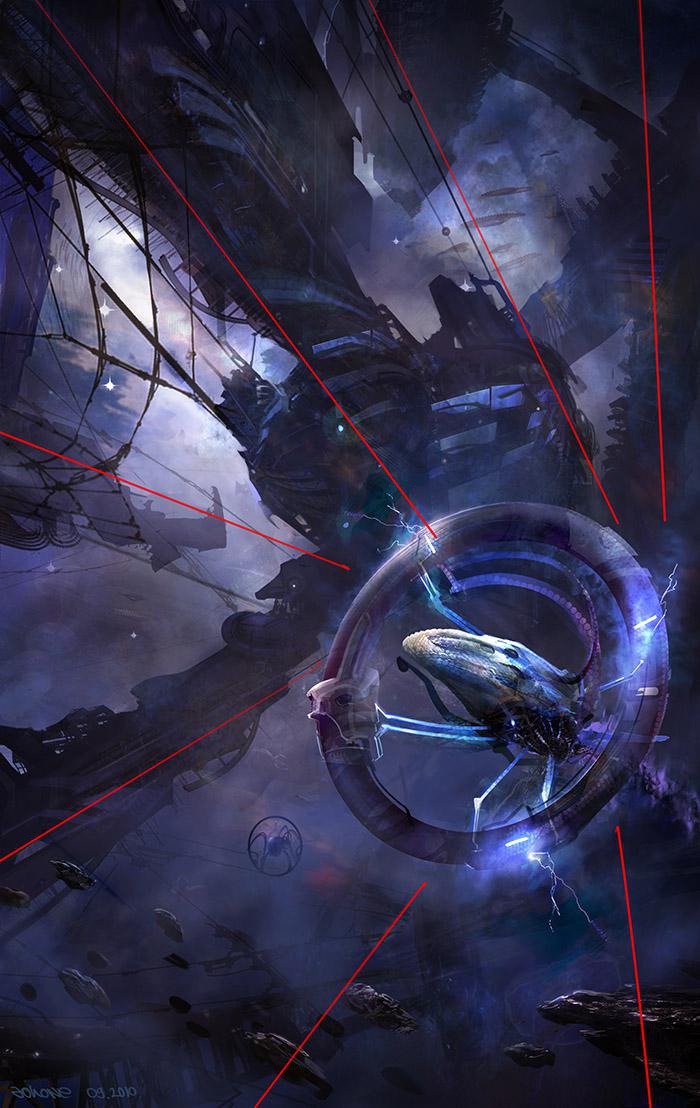 These are a few of the rules of composition. Don't be afraid to change them. For me, composition is something very organic and with practice it becomes more intuitive. As a self-taught artist I use my intuition and natural observations, and bring them into my work. I start my images with basic principles like having my image framed, having objects point at my focal point and using contrast for the payoffs, and along the way I gather a few more tricks and methods that make me want to explore composition beyond the usual rules. I'm not a good rule follower so, at the moment, I'm trying to give my compositions a continuous flow, and lead the eye throughout the image, in a guided tour if you wish, to discover light, color, details, action and loads of personal elements that I put into my images (Fig.12 – 13). 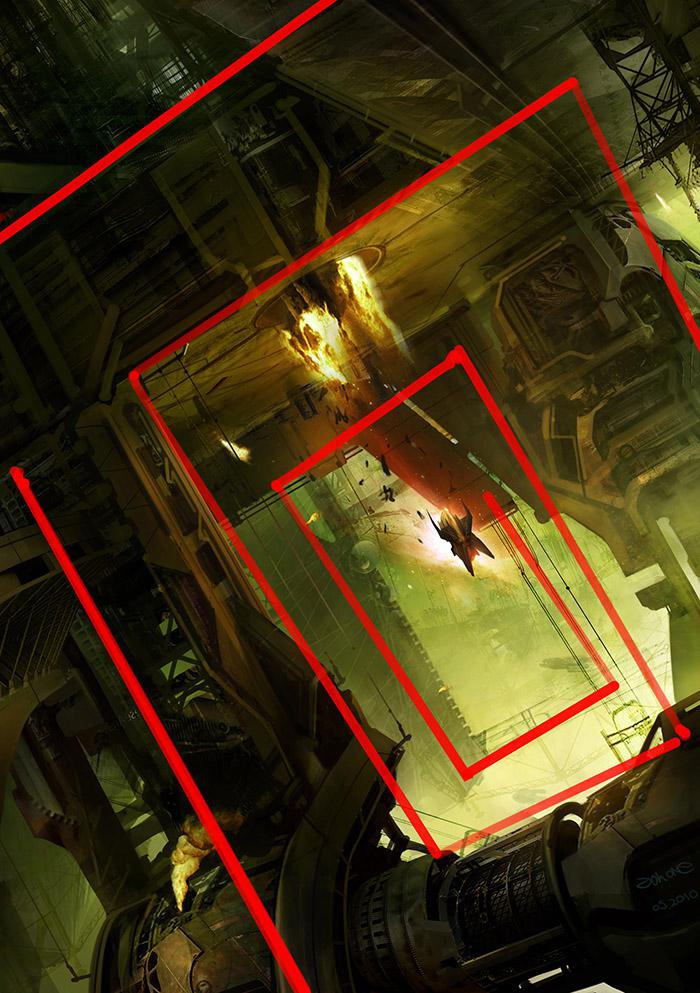 I hope you have enjoyed reading this.