Adjusting a Scanned Drawing: An Introduction to Levels

Scanning a drawing, sketch, portfolio piece, even a photo is one of the black arts of photoshop. There are people out there who know so much about the adjustment tools that they can make any scribble look amazing. I'm not one of those people. However, this is the process I go through when I'm scanning one of my drawings. Hopefully you'll pick up a thing or two also.

Before doing the tutorial: Scan your image.
Some hints on scanning:
At a minimum, scan at at least 150 dpi. I usually use 300 dpi myself, but for small scans that I've needed to blow up to a larger size I've had to scan as a high resolution as 600 or 1200 dpi. Be careful scanning little bitty things at high resolutions though, most scanners CAN'T scan at the top resolution their box says they can. They scan as high as they can and then interpolate (guestimate) the extra pixels. I usually do not scan in black and white, even if the picture is in black and white, since I like the ability to adjust the temperature of the pic myself. (but that's for another tutorial)

Right away crop and orient your image. It's good to crop before you mess around with remastering the image so that the only factors involved in the adjustments are from what the final image will be. You won't have a glowing white border from the scanner lid screwing up your levels this way. 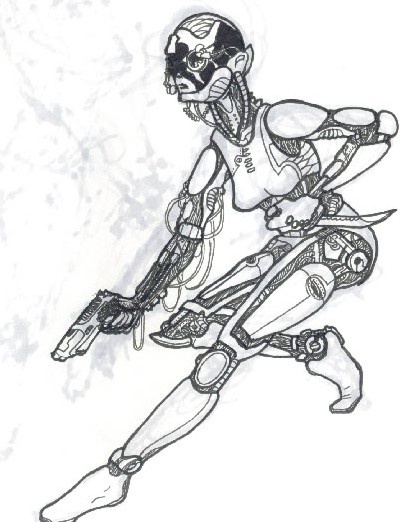 Ok, this Robot gal I drew (it's only an hour of work, so be kind) lends itself well to this tutorial, with a variety of headaches to deal with. Right away you can how washed out the scan looks. There's also those little gesture sketch lines behind her to deal with and a couple of other blemishes.

YOU COULD DO IT THIS WAY....
The sketch lines and the washed out look can be dealt with at the same time with the power of levels. Instinct might make you tempted to use auto levels simply because it's quick and painless, and as you can see below, autolevels (found under image>adjust) will make the image pop out, but it doesn't get rid of those gray sketch lines.

BUT THIS WAY IMPRESSES MORE GIRLS:
Here's one of the ultimate Levels tricks. Open up adjust levels. See the fancy black bars and buttons? Ignore them. They basically tell you how much of the picture is white and how much is black, and you can alter that if you want to by sliding the triangles, but the easiest way to do what we want here is to just pay attention on the little 3 eyedroppers that appear below the "ok, cancel, auto, buttons". Choose the one that is filled with black, the first one. By clicking on the darkest part of whatever image, you reset the black point to make that spot pure black, even if it's not. 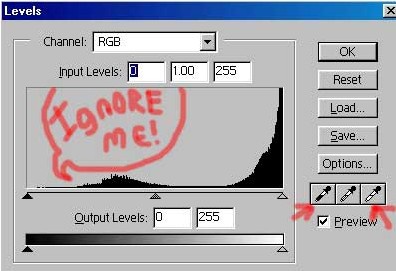 Sidenote: You don't have to permanently apply levels or any adjustment to an image. Starting with Photoshop 6 there has been a little thing called adjustment layers. They're update-able adjustment effects that you can apply or remove just like any other layer. (click the little half circle on the bottom of the layers palette to apply one)

If you guessed that the far right dropper, the white one, is used to set the whitest point your right, but that's not what we want to do. If we set the whitest part of the document as white, then we'd end up doing the same thing that "autolevels does". Instead I use the white dropper to click on the gray I want to get rid of. It'll turn everything that tone or lighter to a pure white, eliminating all our sketchiness problems!

The result of setting White/Black points 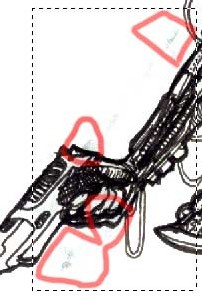 It's not flawless, a few spots that are only visible up close still present problems, but most of the work is done.

To get rid of these without messing up the rest of the picture, select them loosely.Feather the selection, (select>feather) the number of pixels depends on the resolution, but between 5 or 10 is good. 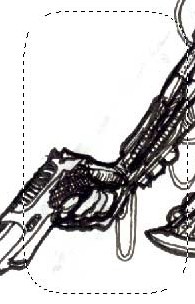 This blends any work we do to this area into the rest of the picture, eliminating the hard line of the selection once any correction has been applied.

I used levels again here. You could use the exact same procedure as before just at a closer detail, but for the sake of being different, try something else. By dragging the white triangle on the slider toward the black triangle, the smudges and grays will fade away. Don't drag too much, or the selection will end up too different from the rest of the image. 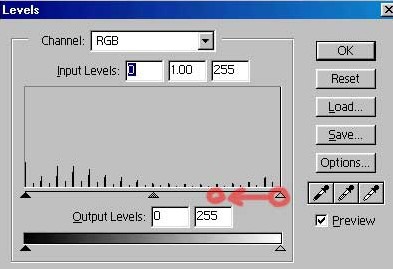 You could have done the first adjustment this way too, but tweaking the sliders correctly at that point would have been more time consuming. You can also use the sliders at the very bottom to limit the range of colors.

Here's the finished scanned and fixed up image. Since (if you scanned the image like a good little graphics junkie), it's at a higher resolution, you can output it to your printer, to the web, or for use in other projects. I also used the eraser and clone tool to clean up the image a little bit, but that's for another tutorial. 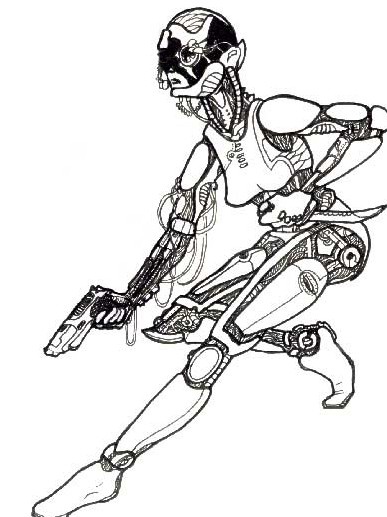 If you find any errors in this tutorial, I'm not perfect. Send me an email and we'll figure it out.