How to add destruction to a 3D scene part 3: building a town scene pre-desolation

Andy Walsh begins his series of creating a scenic environment of a small town with a vintage cinema through techniques used in Blender and Photoshop.

Welcome to the next stage in this tutorial series where we’ll be creating a scene from a small town and then seeing how it looks many years after humans have taken off and nature has taken over. For this image I wanted to focus in on a small part of a street and some kind of pleasant cultural experience to contrast with the desolate post-apocalypse version. I immediately thought of a cinema (or ‘movie theater’ as it were, seeing as I’m basing this in the US) and began looking at lots of images of vintage theatre buildings, specifically located in the US. I lived in the Pacific Northwest for the last five years and got to see a few vintage cinemas and just love them.

I spent a long time pouring over images of old Cinemas from around the 1930s era up to around the 1950s. I like how those buildings have the big chunky signage out front with the billing and the fluorescent tubes. it’s very dimensional and would look great illuminated in the before shot and then would also look great covered in ivy and rust in the after shot. It was a challenge to figure out what I would be capable of making in 3d because some of these buildings are incredibly ornate.

I spent a long time pouring over images of old Cinemas from around the 1930s era up to around the 1950s. I like how those buildings have the big chunky signage out front with the billing and the fluorescent tubes. it’s very dimensional and would look great illuminated in the before shot and then would also look great covered in ivy and rust in the after shot. It was a challenge to figure out what I would be capable of making in 3d because some of these buildings are incredibly ornate.

I fought quite hard to find the angle that I wanted. I had something in mind that was inspired by a shot from The Last of Us II concept art. Something simple, maybe using a longer lens. As usual, when you try out the idea you have in your head, it doesn’t necessary look good ‘on paper’ as it were. So I pulled back, widened the lens and tried an angle going up/through the street. Eventually I settled on the final angle we have where I felt our eye would travel up to the top theatre sign and that would be our focal point. You’ll notice all the lines in the image lead us there too. 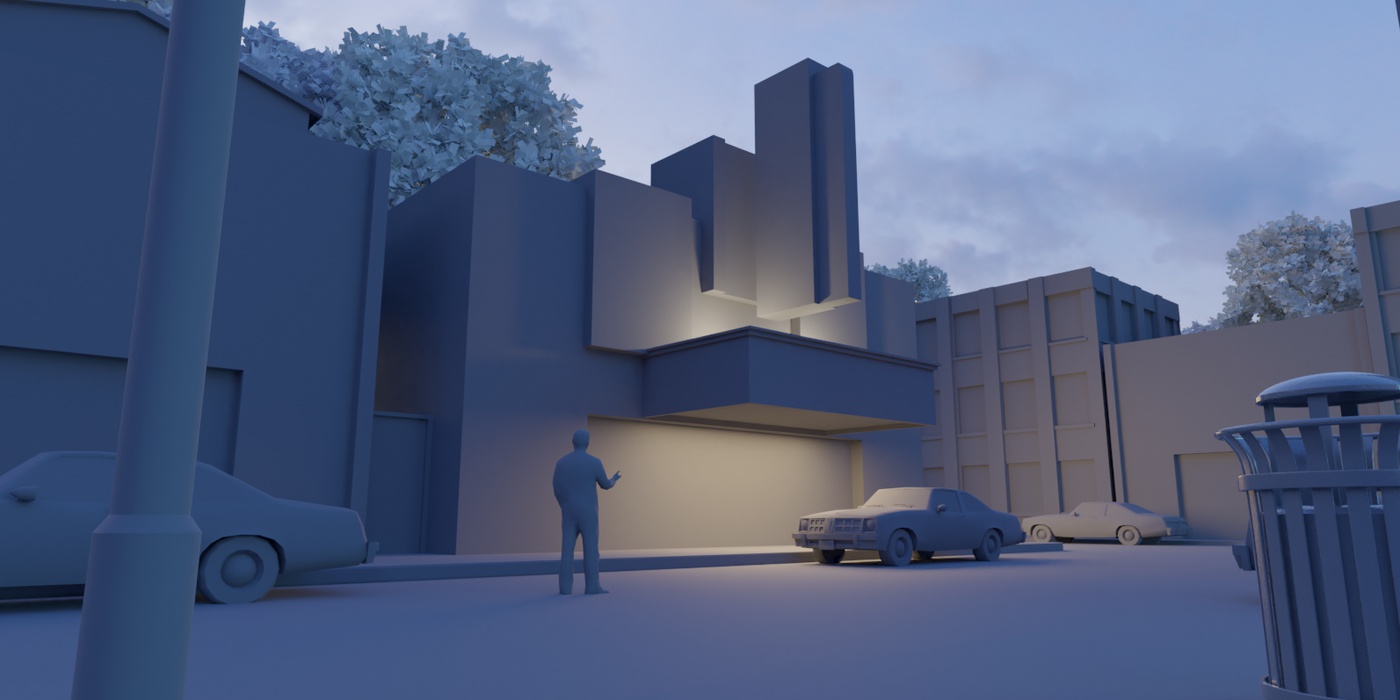 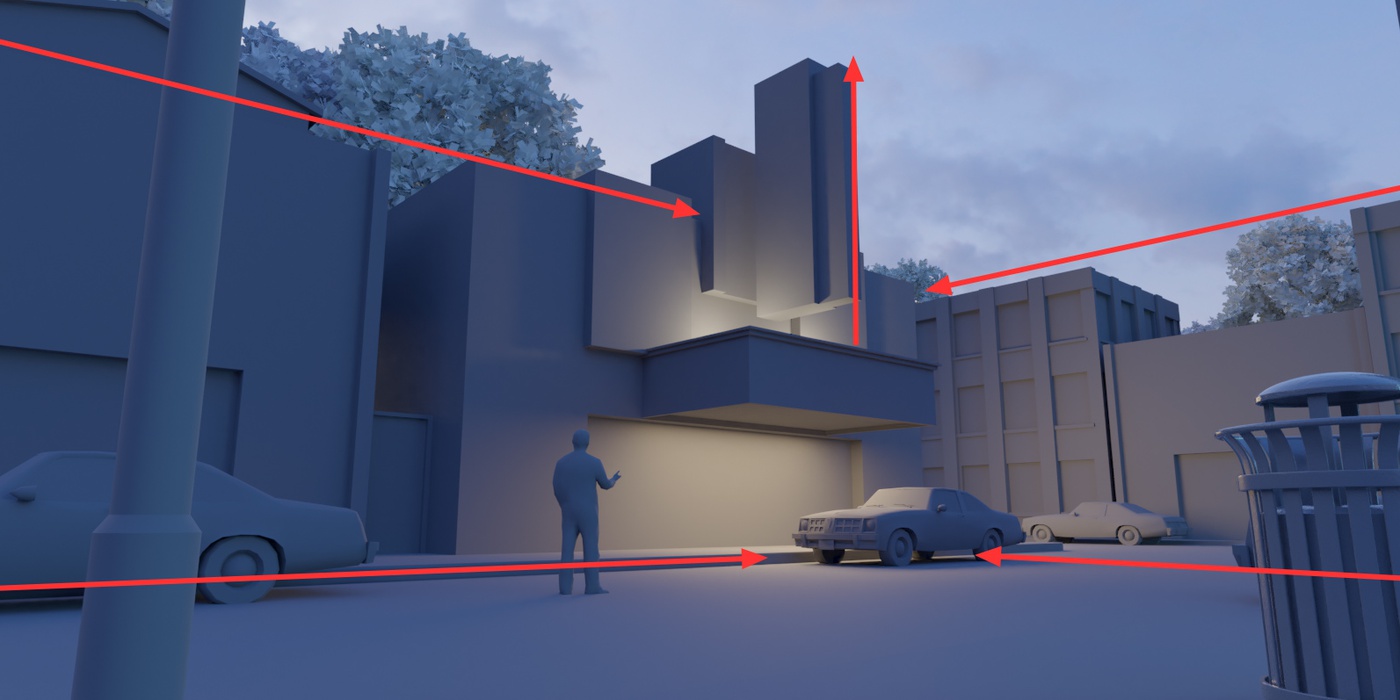 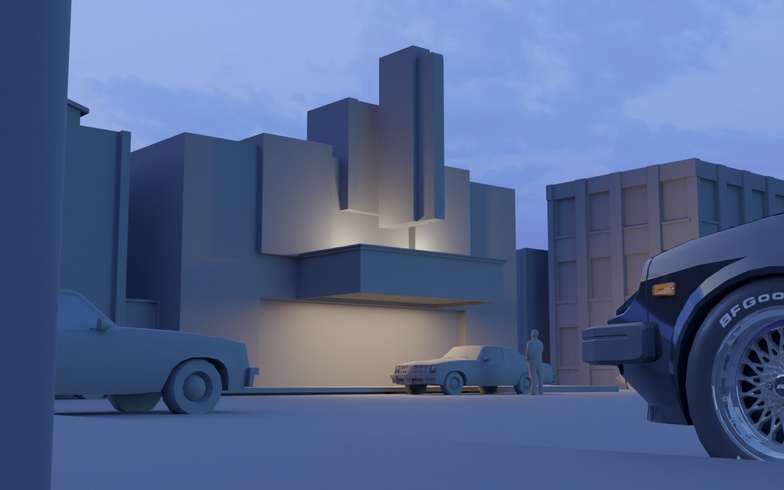 Now you have your block-in, experiment with different angles. Don’t forget to make multiple cameras, even multiple scene files, and move objects around to get the perfect composition. 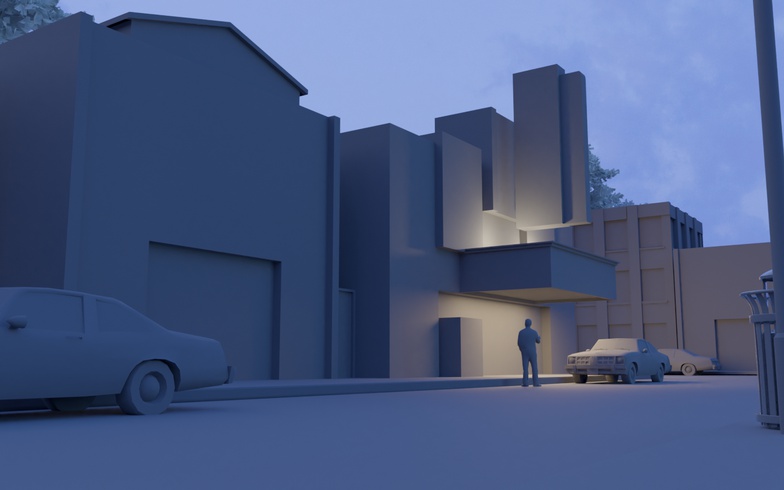 So some of this was started earlier on in the process. I’ll usually have the general lighting vibe established while I’m trying to capture the camera angle as lighting affects the composition a lot. My aim for this scene was very early evening with lots of blue ambient light and still a bit of brightness is the sky.

In this stage I’ve started to texture a few things but one of the main ways in which texturing will influence the overall lighting-read is in the reflectivity of the ground plane. It’ll reflect some of the sky light and add some depth and maybe some mood as it pertains to weather and dampness.

Back to the lighting – you’ll see from the Blender screenshot of the finished scene that I have just one HDRI (from HDRI Haven, called Venice Dawn) and one cube with a Principled Volume Shader applied which encompasses the whole scene.

There’s one area-light positioned down the far side street to help back-light the edge of the theatre and all the other lights are just local (e.g. the Apollo sign) and don’t really affect the whole scene. It’s worth noting the few adjustments to the HDRI shader in Blender. I’ve tweaked the brightness, hue and saturation via a few nodes. Quite often, a HDRI image doesn’t look good out of the box and needs fine-tuning. Even though this is from the finished scene it’s the lighting setup used from the beginning. 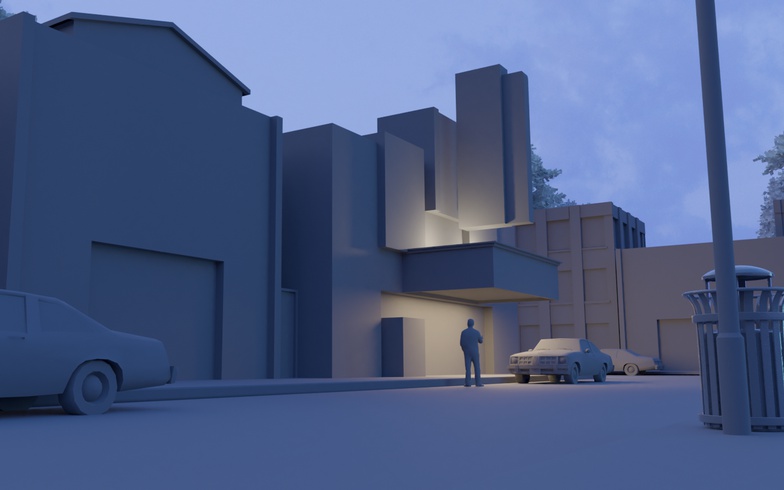 Establish your lighting as early as you can and take the time to get your HDRI looking good by tweaking its brightness, hue, saturation etc. 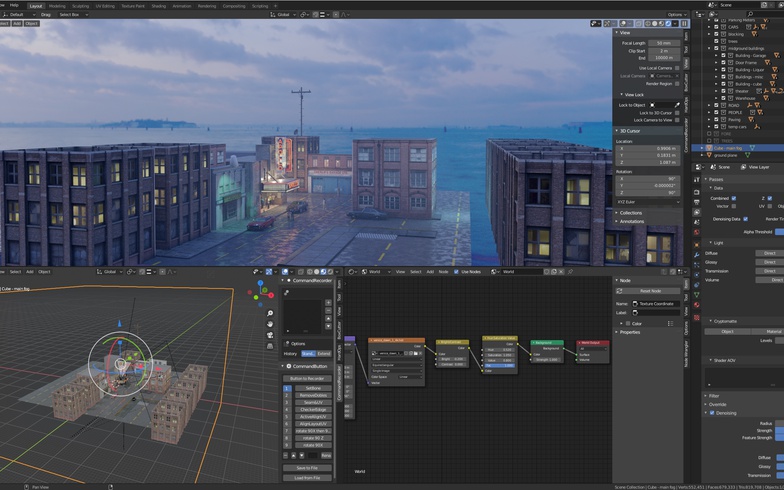 As usual, use subtle volumetrics to breathe a little atmosphere into the scene.

Okay, so pay attention to this one because it might just change your life forever. I know it kinda changed mine. I always knew this technique but it just got more interesting.

So we probably all know the technique of taking an image of a building (usually from textures.com) and placing it on a flat plane in 3d software, and then cutting into it to raise it forward/push it back here and there until it looks three-dimensional (e.g. push windows and doors in using extrude). But often the issue is how to find the right building texture. Well I have an amazing solution – Google Street View.

In [image step 1] you can see the image I found from a street in Hollywood. I just needed a low building with some vintage features and there’s tons of them in LA. I next chop out the bits I need and after that I straighten them up [image step 2 & 3]. The next step can really be the first thing you do but I take a screen shot of the block-in building so I know exactly where to place textures. Maybe you don’t have a blocked in building yet, that’s ok, just make a texture anyway and build the model afterwards. No biggy. Next you’ll see the finished texture after I found a few more bits and pieces from other streets [image step 5]. Finally, in [image step 6] you’ll see how it looks once I’ve made the extrusions in Blender. The sign had to be done separately. It may or may not hold up close to the camera, but it will definitely work from mid-level and beyond. This is how most of the buildings were done in the scene! 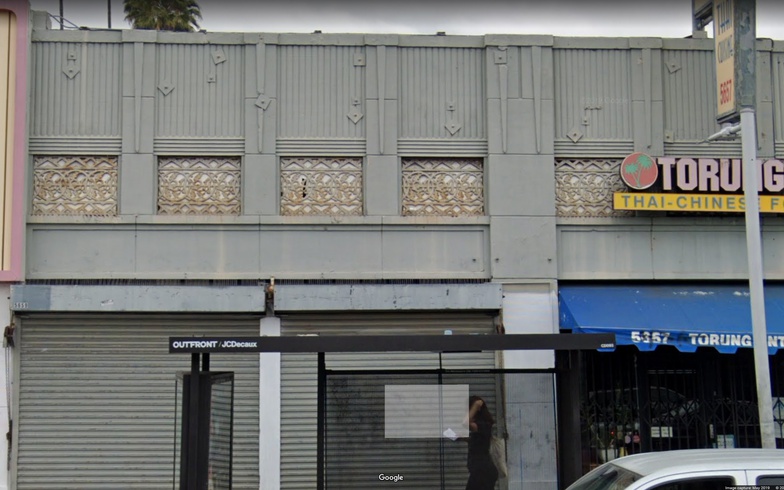 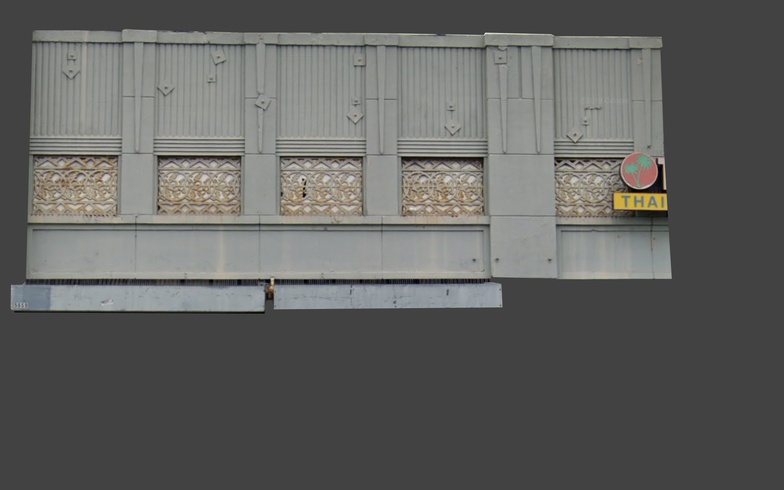 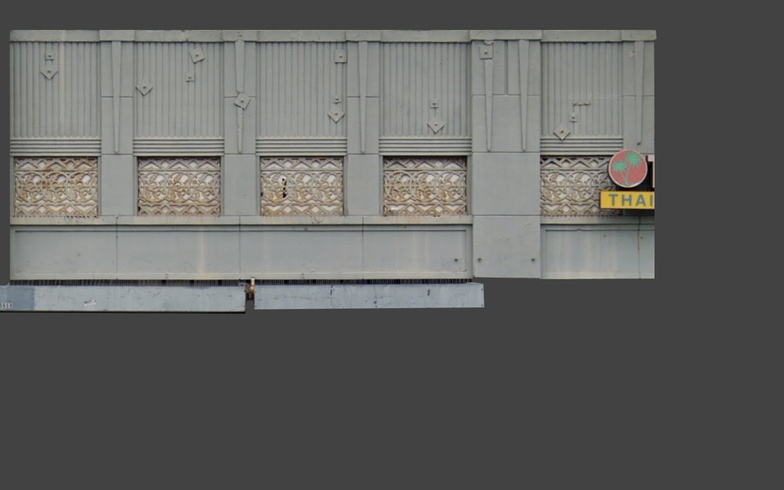 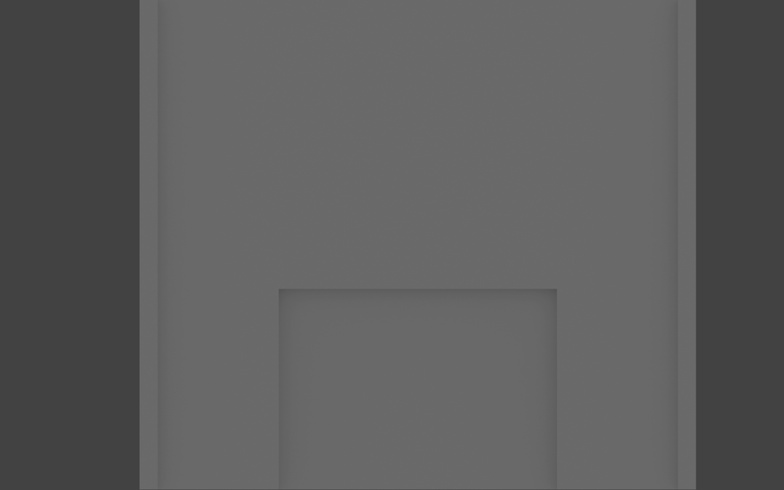 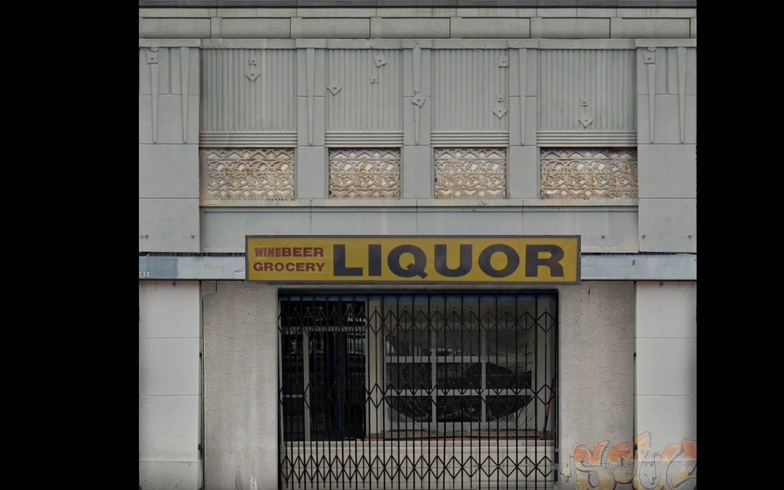 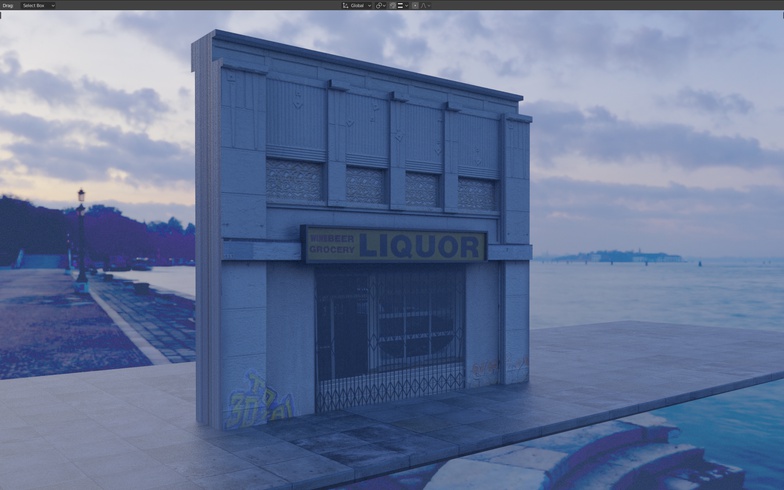 Finishing up the scene in 3D

In terms of set dressing, pretty much all the cars and people were found on Sketchfab. They generally don’t just drop into the scene and work, there’s a lot of time spent figuring out the textures and making the shaders look right in Blender.

In terms of the main theatre building, that was also made using the same technique mentioned earlier. Although this time I assembled the building texture from separate elements found on textures.com (so the brick texture and the windows etc. were all assembled to line up with a screenshot of the building-front inside Photoshop). It’s great because I can apply my own dirt and wear because it’s one big texture and I know where the top is and where it touches the ground. If this was all assembled inside 3d using tiling textures, I wouldn’t have any control over that.

Here you can see the texture I used. I actually unwrapped it, kinda piece by piece, and this is the main middle section. I even put in dirt where the main Apollo sign makes contact with the wall. 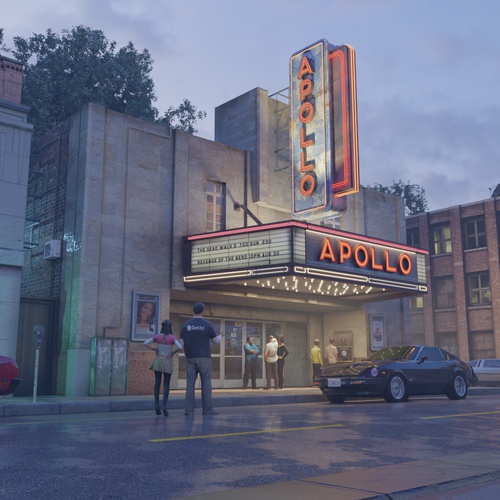 You may on occasion have to UV unwrap a building. If the shape is simple enough it shouldn’t be too hard. You gain a lot of control over the finer details this way and can add your own realistic dirt. 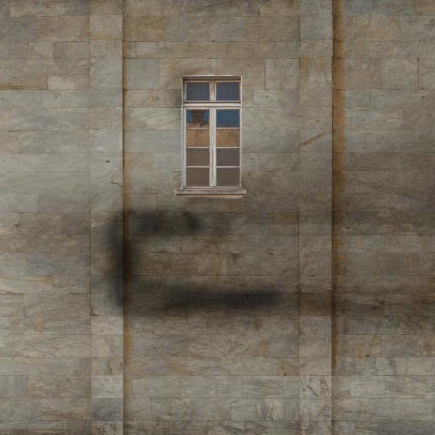 If it’s too hard to unwrap, try splitting the model into pieces and unwrap separately.

Taking it into Photoshop

This was a fairly simple scene to comp in Photoshop. I had the foreground trash bin and sign post on separate layers and then I separated the whole scene so I could place my own sky in.

Here the first thing I do is get a nice interesting sky texture and put some kind of nice grading adjustment over the top to boost contrast. This is the first time you can feel the scene come to life. In 3d things feel a little low-contrast and the sky is just coming from the HDRI image so we have almost no control over it.

Now we have to make our slightly stale 3d come to life a little by way of adding photos. Here I’ve added some realistic potholes in the road, a manhole cover and some faded posters/flyers on the foreground objects. It’s always important to try your best to find a photo that already matches your scene i.e. don’t get a texture of cracked concrete and then skew it onto the ground as a flat texture only has 2 dimensions and your ground has 3. Sometimes you even have to make sure the overall perspective is similar.

I will carefully colour-correct the photo and skew it into place, often using the ‘Blend If’ feature in Photoshop to fade the photo into the background plate.  More details on this can be found in my previous tutorial depicting the city scene but here’s a quick refresher: 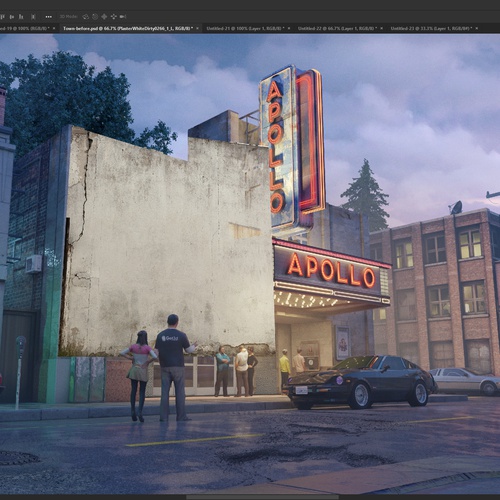 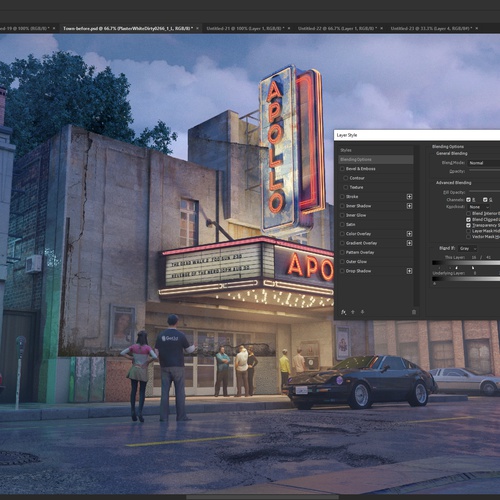 I think I said this before but it bears repeating. The 3d isn’t enough by itself. It always benefits from some extra manipulation in Photoshop. Especially for architecture that’s a little vintage, or in a scene where there’s a bit of degradation to the surfaces.

To this end I added some dirt, cracks and leaks to our two main buildings. I hope you can see how using photos as a basis for the modelling, followed by another pass of photo-textures, can really bring your scenes to life.

You’ll notice I subtly added some slight hints of rust to the wheel arch of the red car. This again just removes the perfection of the 3d.

Fortunately, because of the photo-real approach to building the 3d, this phase was fairly quick and simple. It was all there, it just needed that final push to bring it to life.