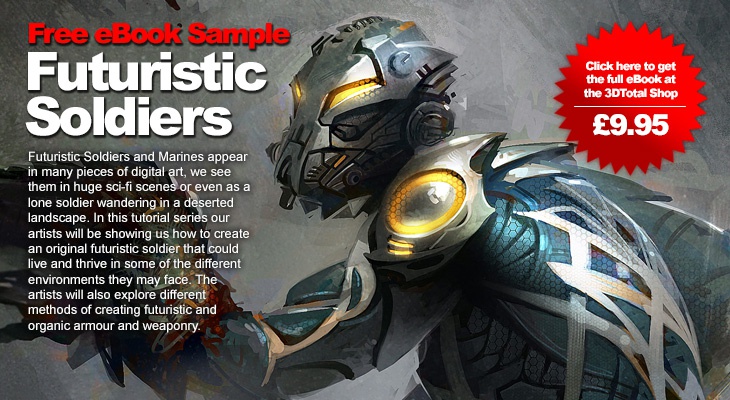 Hi, all. I'm very glad that 3DTotal gave me the opportunity to develop this idea and show the different stages behind creating a futuristic marine. I hope this tutorial will be useful to everyone and will give helpful advice and knowledge to those who still want to learn and advance in the field of concept art. The purpose of such work is mostly supporting the film and game industries. It makes the work of the concept artist very important because you need the right vision, and to create an original product, as this is what makes it successful. The final result is the fruit of the work of many people, but the artist always has an important role and is crucial for the project.

The theme of this tutorial is a futuristic marine. This made me think of a scene with a soldier who is being ambushed by flesh-eating worms. Let's get started!

A serious production requires a lot of preparation work before the real creation process starts. Lots of different possible thumbnails are outlined. Positions are sketched; diverse visions and designs are tested. In this case we don't have the necessary time for this step, nor is it the tutorial's purpose.

My first task is to make the concept for the composition clear. We can use a Hard brush to build the silhouettes and to compose its elements (Fig.01). The masks are chaotic and expressive, as in the beginning I'm not searching for a distinctive shape or volume. When I was a child I enjoyed staring at the textures of flooring and the objects around me. Looking at the structure and the patterns of the stones, the wood and any other surrounding things is a nice way to develop one's imagination. You start seeing interesting shapes and volumes; faces and figures; people and animals. This is why my first task is to chaotically sketch masks and lines until you see a definite shape that could be the frame and structure of the image. Achieving a good end result might be pure coincidence but the satisfaction from using such a process is huge, and the development of a character in this way is fun (Fig.02). 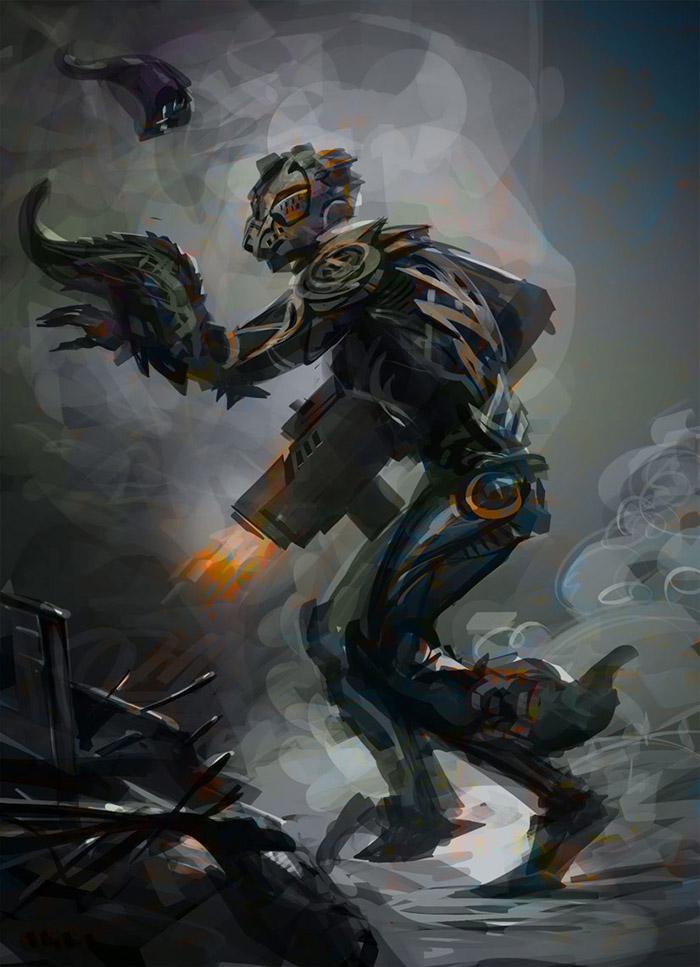 This is the stage where the basis of the color is lain down and the light is built up. It is a quite rough version of the final vision of the character. After having built up and structured some composition in grayscale, we define the colour range for the illustration on a new layer (Fig.03). For this we can use a picture, an old drawing or a texture. We place the selected image above the sketch and from the drop down menu select Blending Property Color. Later we can add or remove colors by using selection or moving certain parts to other places, or you can just fill in with the brush. This is the stage where the contrast and the intensity of the colors are set, as well as the light source. 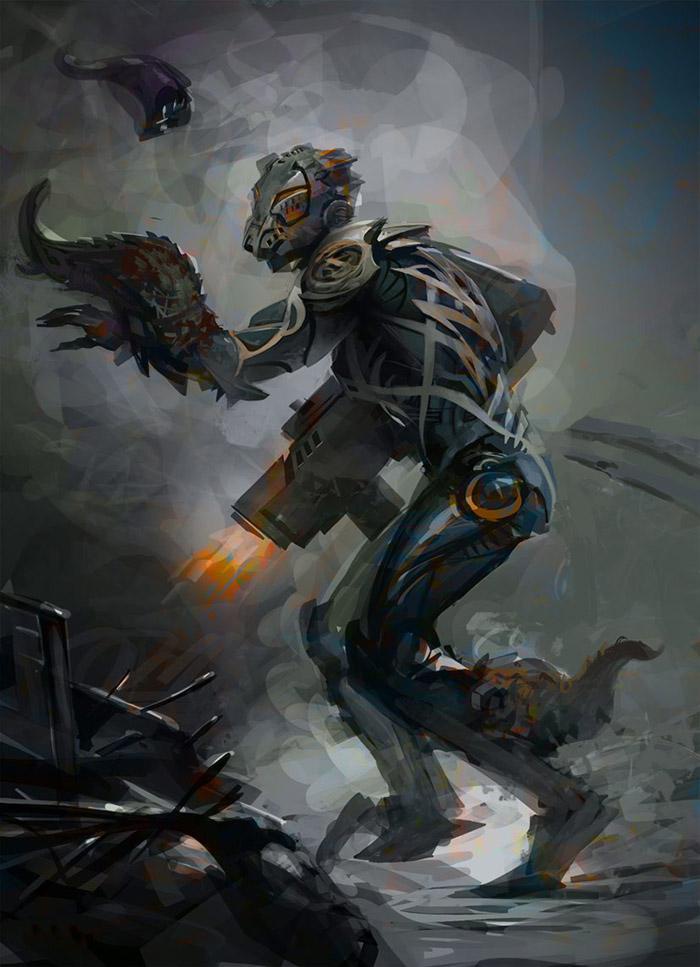 Next we're going to develop the character and all the other details, like the weapons and the armor, but this time with colour. Actually this process ends when the picture is completed, because there's always something to be corrected or added to the initial idea. The deadlines are quite often very tight in this field. At this stage we set the direction for the further development of the character (Fig.04). 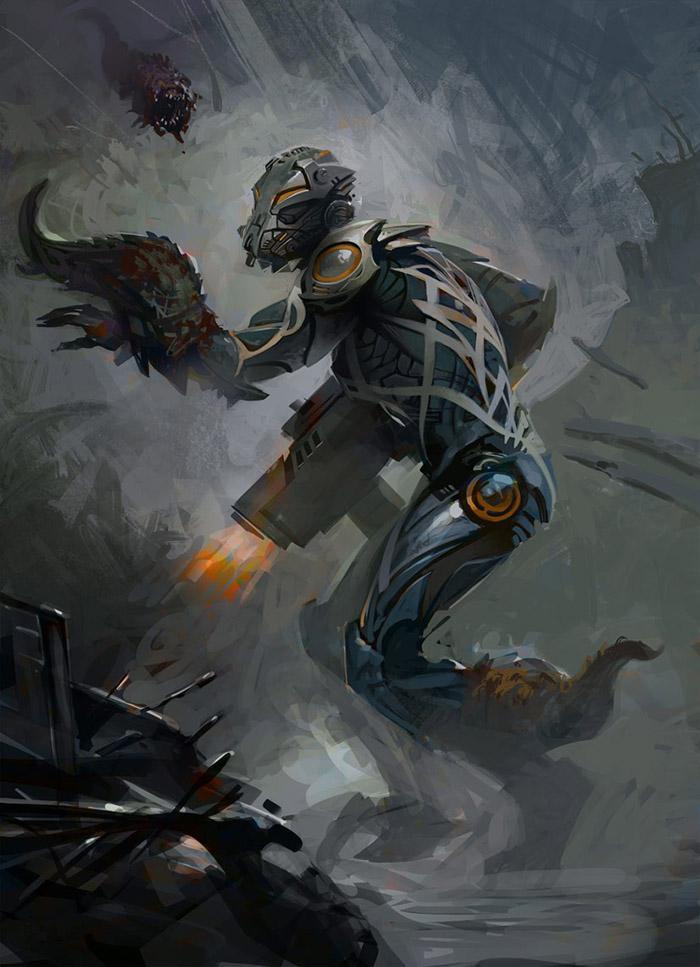 After taking the character to a fairly advanced level, we must do our best to think about how we might finish the piece. As we have the luxury of time, we can develop it even more by finishing the main idea and adding the details on the materials. It is now that we have real creative freedom.

The details are an important element of completing the character (Fig.05). They are what makes it unique and original. The more original the concept, the better and more successful the end product is. This is what every artist aims for, in order to keep at a consistent level that shows quality, and that ensures the success of the studio and gets the artist larger and more interesting projects. 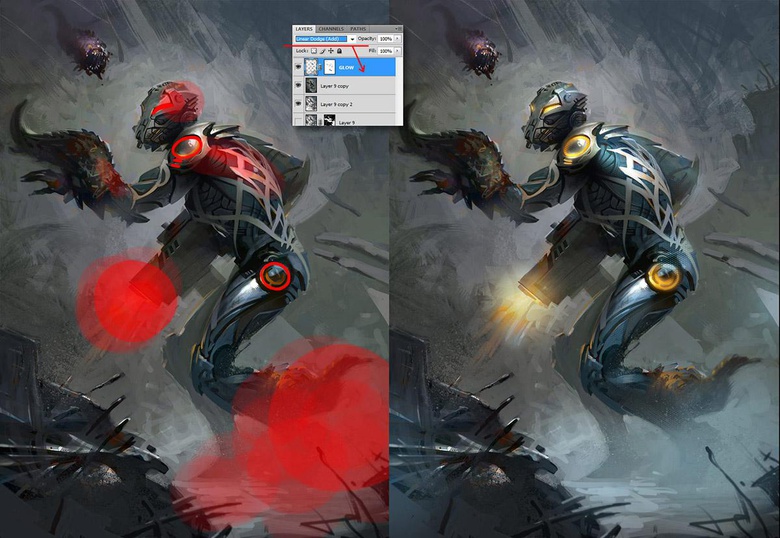 When painting futuristic armor it is absolutely necessary to add something that shows how the armor fortifies the character's strength. There must be something that translates the force and abilities it gives in a visual language. As the action takes place in the future, it must show a futuristic level of technology as well. This can be shown by including glowing elements to the armor. The typical elements of the armor are now set in place. On a new layer we define the areas where we want to make the glowing effect stronger (Fig.06). I've marked these areas in red in order to make it clear how to reach this effect in your own work. We use Gaussian blur to disperse the light and get the desired glow effect, and finish off by setting the layer on a new blending option (Linear Dodge). 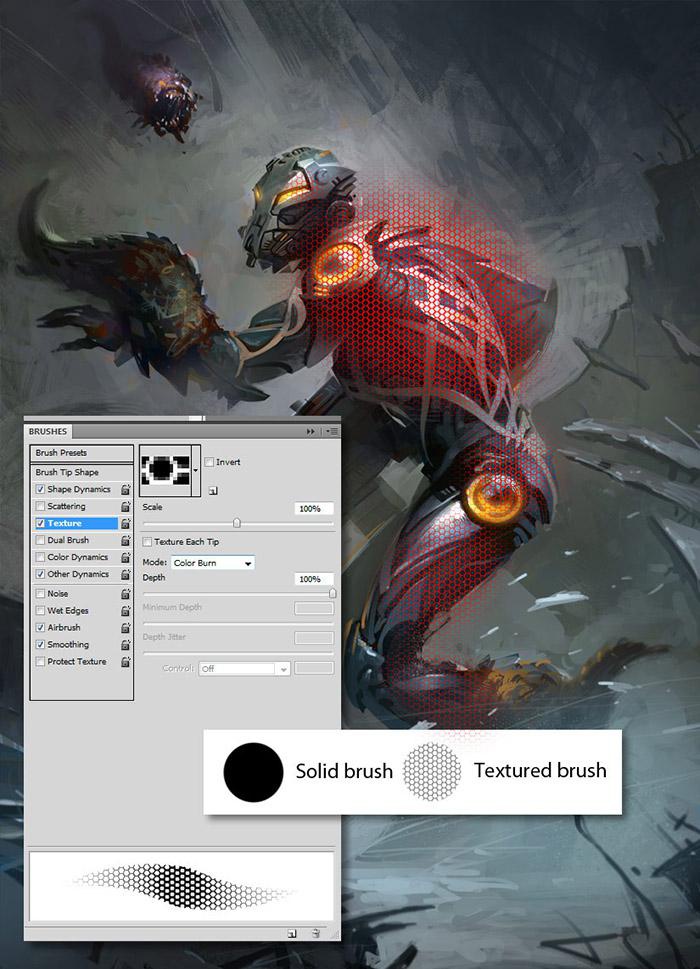 In order to give a futuristic appearance to the armor, it is necessary to use a texture that reflects a futuristic effect. For this we need to try different materials and underline their structure. We create a new layer and change the blending mode to Linear Dodge. Then use a Hard brush, which you can select as a "texture" from the Options menu. I've marked the areas where the texture is applied in red on Fig.07. After reaching the desired effect we create a layer mask and define the areas where we want to use the pattern. 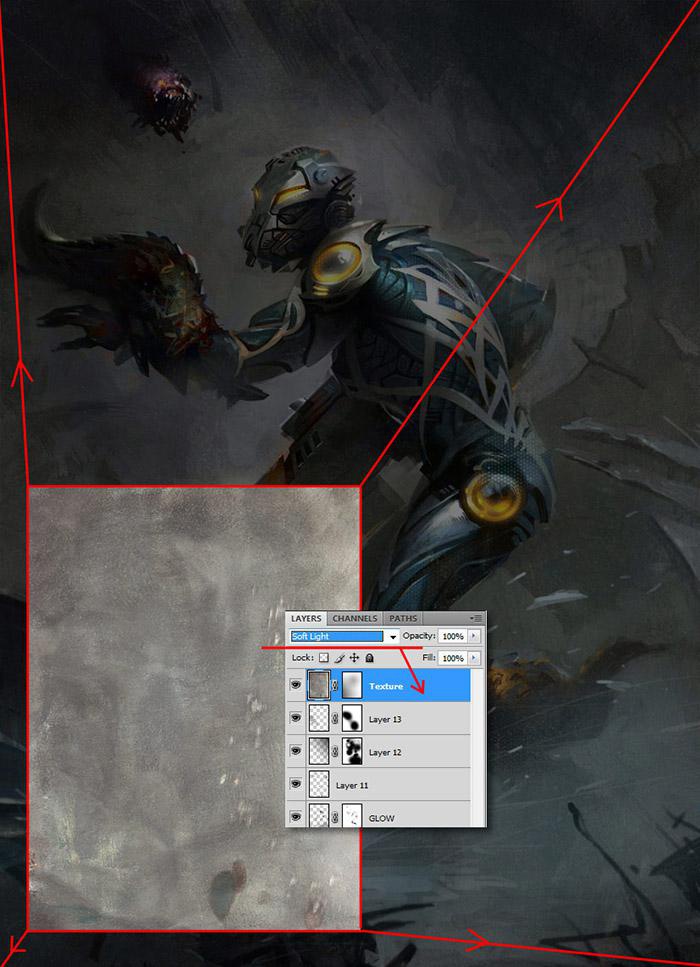 The second stage is to texture the whole picture, and then finalize it by adding soft light to the blending mode of the layer (Fig.08). 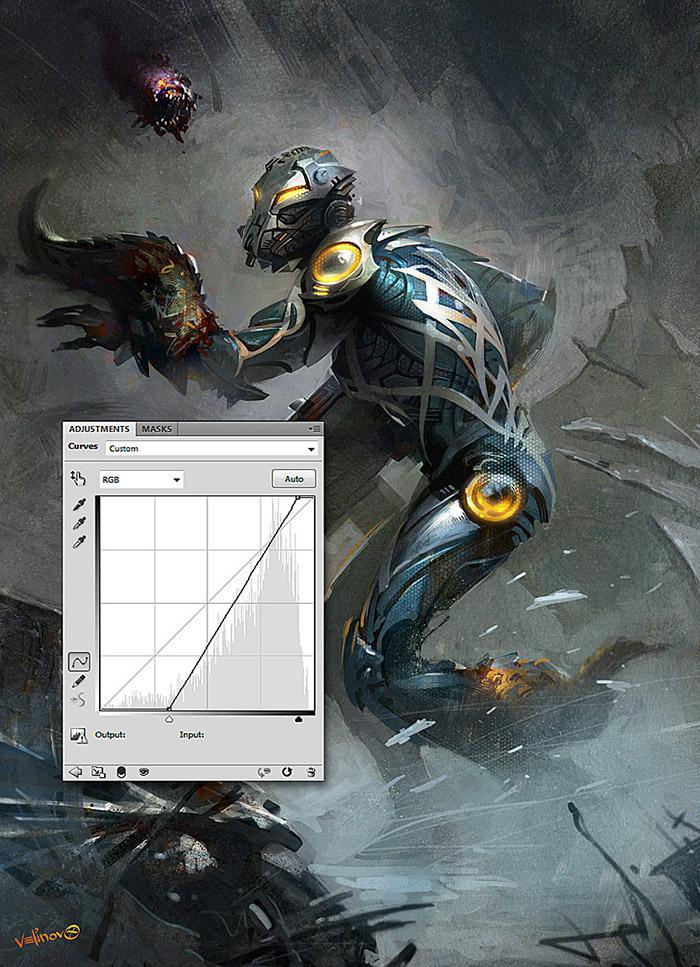 The last stage before praising ourselves and finishing the work is the color correction (Fig.09). We create a new adjustment layer and use curves to set the desired corrections (Ctrl + M). Strengthen and define the intensity of the contrast and for better control over the process, paint in the mask for the layer. This almost ends our work on the concept. The last stage is the artist's signature. 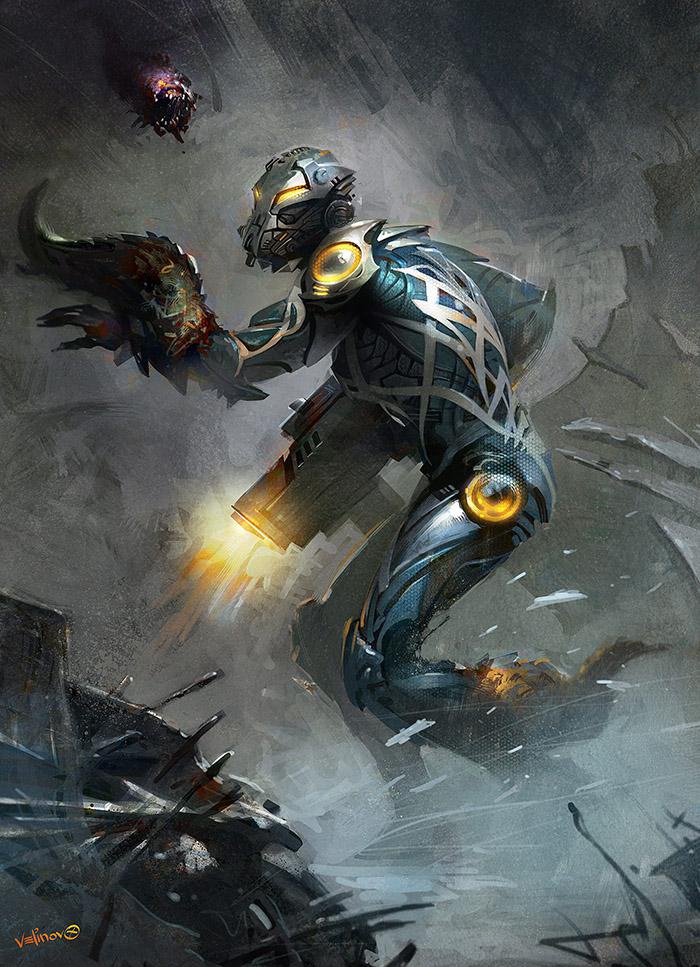 Now we can praise ourselves! The character is complete and developed, and we can move to the next task. For me it is drinking a very cold beer. To those who enjoyed this tutorial, I hope you were inspired and learnt something new. Pleasant drawing!