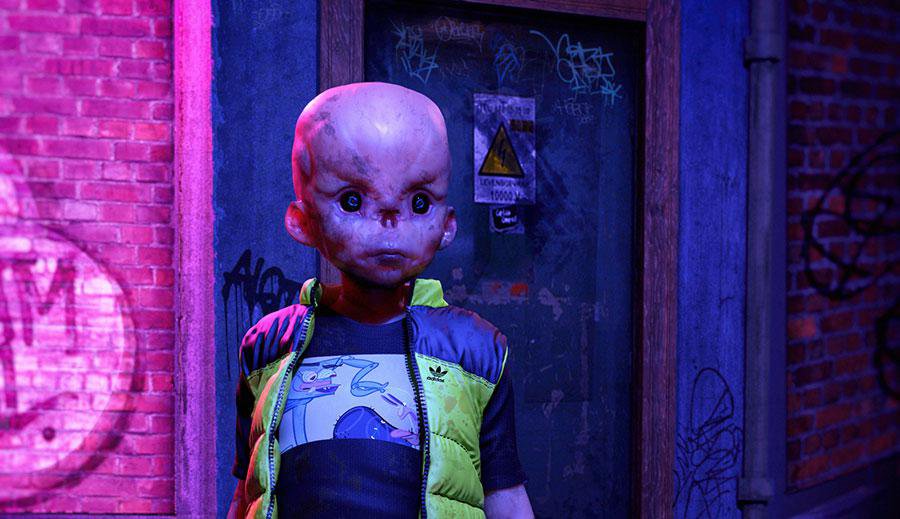 Bruce Conners takes inspiration from a piece of flash fiction to create a mischievous alien youth with ZBrush, Marvelous Designer, and KeyShot…

Where the residents of Halbrook Street were in agreement was the need for extra policing. You can't turn the lights off and close youth centers and remove apprenticeships and not expect school leavers and younger not to get up to mischief! It was common sense. Worse: unnecessary. And yet, here they were, barricading themselves in at night in fear of youth-on-youth 'games' – the reality being streets on fire and music blaring loudly from bluetooth speakers connected to phones. No need for street-lighting with substance fires cutting up the streets like road-markings.

Damn this State, pushing blame onto the parents for their own failings! Greedy fatcat politicians, tearing it all down just to build it all back up again, lining their own pockets. Look at the kids out there with nothing to do but smash mailboxes and crush the souls of anyone who dares to walk the streets! Laughing, dancing, and drinking in the orange glow, leather jackets and denim two-piece blends and halter necklines. We don't blame them. We want to join them. Maybe not too long from now we will.

Well to me the overall feeling I get from reading this is "these damn kids are out of control!" The fact that it mentions the need for extra policing gives me the impressions these kids are doing more serious crimes than loitering or breaking curfew. Also people barricading themselves in fear of youth on youth 'games' makes it seem as if they are dangerous and violent.

What goal are you looking to achieve with the final piece?

I want the kid to be grimey looking as if he lives on the streets. Also I want to give the impression of him being dangerous so he will most likely have some sort of weapon. I would like to not make him too crazy and murderous looking, he should still have some childlike innocence about him. And he is definitely going to be an alien or mutant because why the heck not?

Using the anime head found in the Lightbox of ZBrush 2018 as my base, I Dynamesh and start sculpting. Using Move, Clay Build Up, Dam Standard, Smooth, and Standard brushes only, I sculpt the alien kid’s head. Dam Standard is used as the first pass to "draw" out muscle groups/bone structure, then Clay Build Up to add mass to the forms. After, then it's smooth repeat smooth repeat, getting more and more detailed. 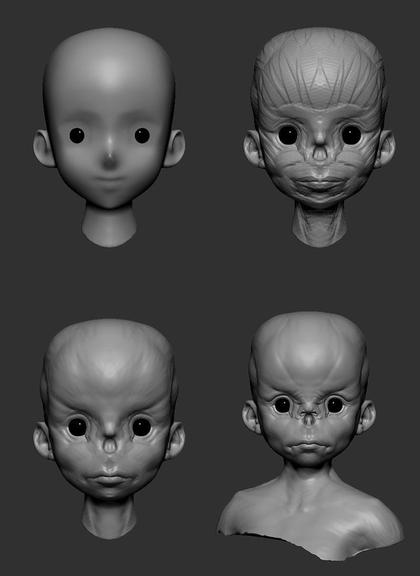 Now I need a body and a final pose. Daz Studio is great for this with man, woman, and child rigged models ready to go and easy to use. I grab a child model and use one of the preset poses, export the T-pose and pose as OBJs. I bring them into ZBrush and adjust the size of my sculpted kid head to match the size/proportions of the DAZ model.

First import the T-pose OBJ in MD, then import the posed version, making sure to select "import as morph target" when importing. Using the polygon creation tool, edit pattern, and edit curvature I create a basic T-shirt and shorts pattern. I set the fabric to Lightweight Nylon and Particle Distance to 5. Switching from simulation mode to animation, I hit record in order to switch to the morph, simulating the shirt and shorts on the posed model. Export selected as OBJ. 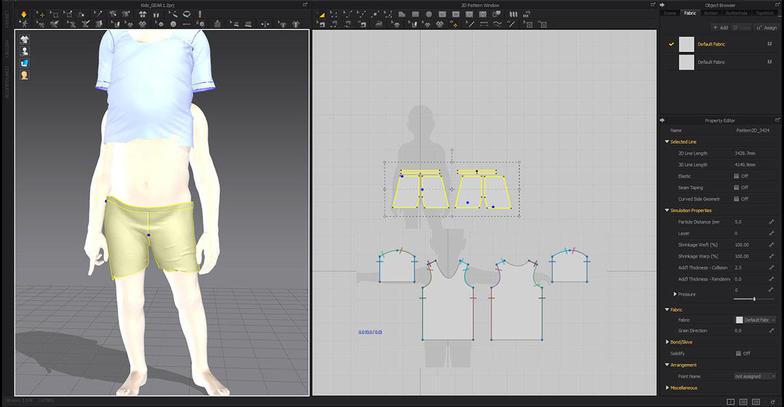 Shirt and shorts pattern in MD

Using the same tools as the shirt and shorts I then create the vest pattern. Using the edit pattern tool I select the bottom edges, right-click, then select Offset as internal line. This is to make the sections in the vest. Then select the entire pattern, right-click, select Layer Clone (over). This will make another layer to the jacket; make sure to flip the normals if you need to. In order to get the puffy jacket look I set the outside pattern Pressure to 21. This will puff the jacket up too much so I set the inside pattern Pressure to -25. Switch to animation hit record and export the posed vest. 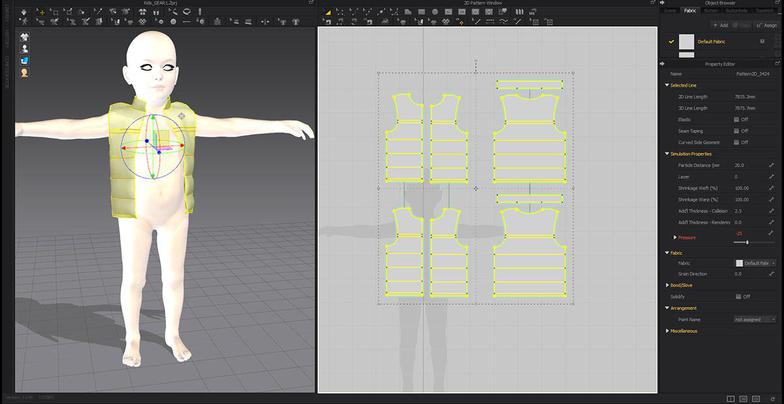 Preparing the clothes for sculpting

Once the clothing has been imported into ZBrush the first thing I do is hit Auto Groups. Then I go into Geometery > Edge Loops > Panel Loops – you'll have to play around with the Loop Thickness Slider to get the results that work best for you. After that I  Zremesh, it should be noted that this method will most likely screw up the UVs from MD but it doesn't matter to me for this image. If you're getting errors during the panel loop or Zremesher stage, try exporting each part of the pattern from MD individually, then panel looping/Zremeshing. 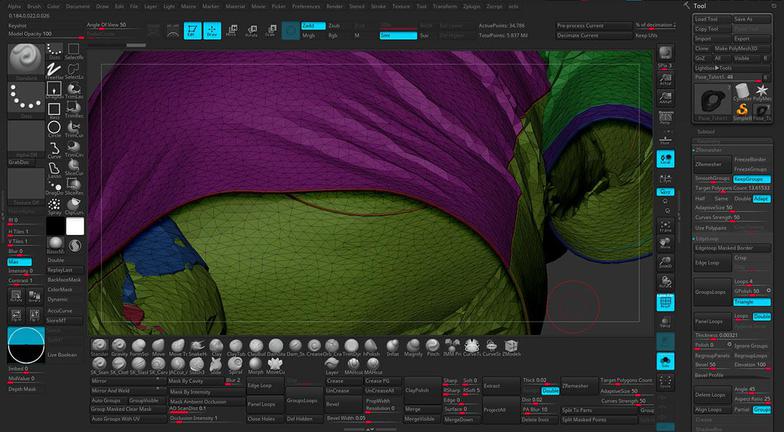 Preparing the clothes for sculpting

First I use the move topology brush to adjust the seams on the clothing so there are no gaps. After a quick Google search for shirt, shorts, and vest reference, I can start sculpting. The main brush I used for the cloth was SK_Cloth in conjunction with Dam standard, Hpolish, and Smooth. I use a free Ztool of a MAC 11 machine pistol from Claudio Setti on Gumroad and the Nike shoes are free 3D scans from Travis David’s Gumroad page. 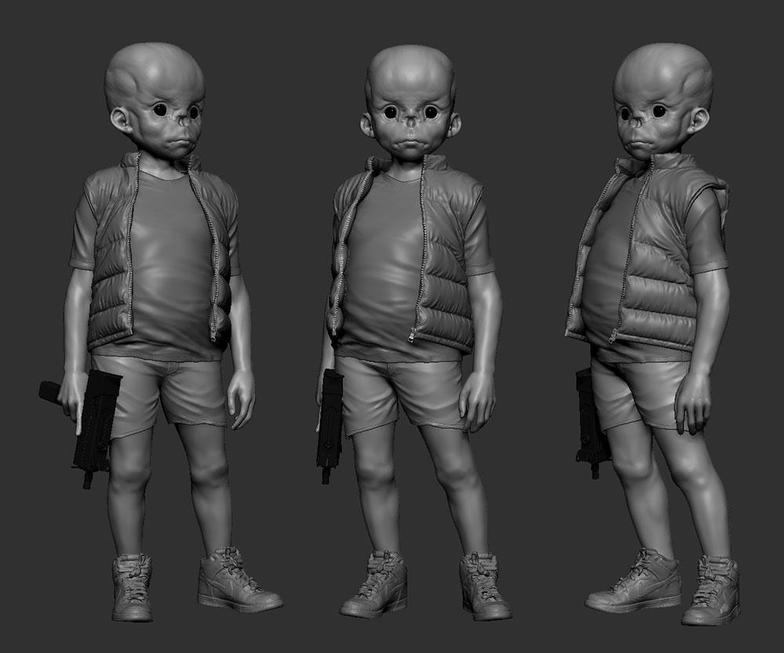 Using the SkinShade4 material I begin polypainting the color zones of the face on top of a skin tone using the standard spray brush set to RGB with a speckled alpha. I repaint the skin over the clownish colors and repeat this process till I get a decent skin look. I don't really spend much time on this stage since I'm going to beat up the skin in Photoshop, and all the clothing colors will be done in KeyShot. 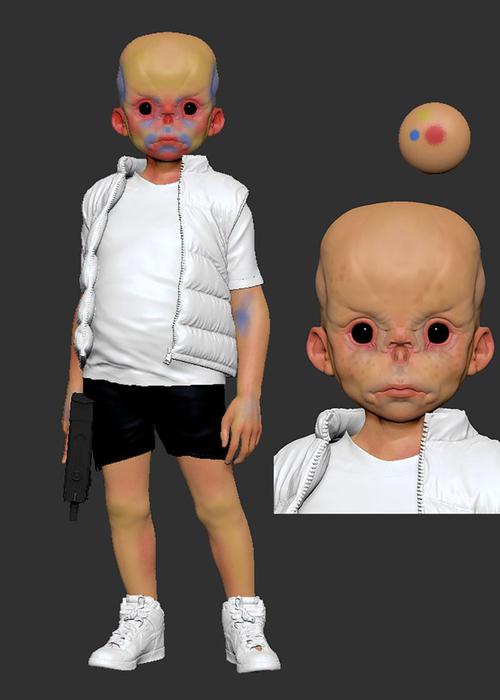 I send my model over to KeyShot adding a ground plane and a free building model from a Google search. Adding 3 Torus objects to the scene and apply an Area Emissive material to them and change them to Watts not Lumens. I set the colors of the lights to pink, light blue, and orange. Switch to interior lighting mode and up my shadows and ray bounces. In the render tab I select Shadow, AO, Clown, Depth, and Normals. 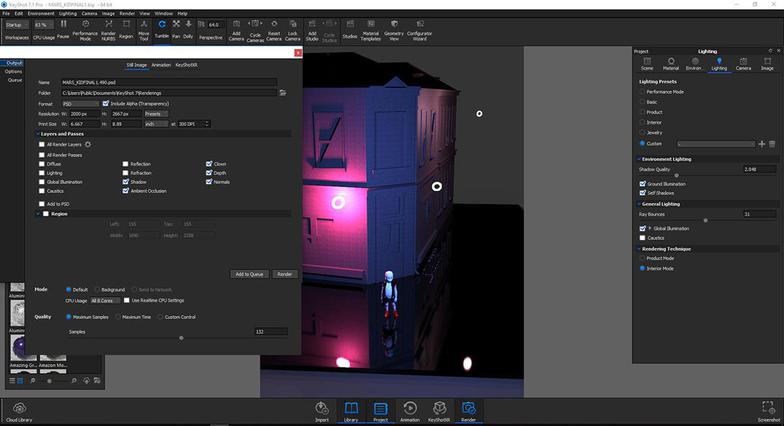 My first render pass is my main one, with the Transperency Material for the skin and variations of the Plastic material for the clothes. I also add a Brick texture to the building and a label to the T-shirt for the cartoon graphic. The following passes are for the second color of the shoes/jacket as well as specular and a cement material on the building.

Finishing up in Photoshop

I begin by masking in all my layer passes on the character, including using textures for clothing stains, skin, and the eyes. Then I grab some photo elements off of cgtextures.com and start putting them into place. Using Curves/Hue & Saturation and some gradients I match the photo elements to the scene. And finally some curves adjustments to push the lighting some more and using the Nik Collection Analog Effects 2 plugin (free from Google) – I add some blur, grain, and vignette. And done!