Darko Mitev takes us through the ZBrush, Maya, and Substance Painter workflow for his incarcerated but “Innocent” 3D humanoid character concept…

In this tutorial, we will look at the making of my latest project called Innocent. We will go over my entire pipeline for creating realistic characters from design sculpt, production model topology, sculpting the details, texturing, groom, lighting and rendering, and final comp. The project started as a test for me to visualize a character from a fictional story that I am writing in my spare time. I knew that seeing the character come to life would inspire my writing, and the writing will inform the design and how he should look. 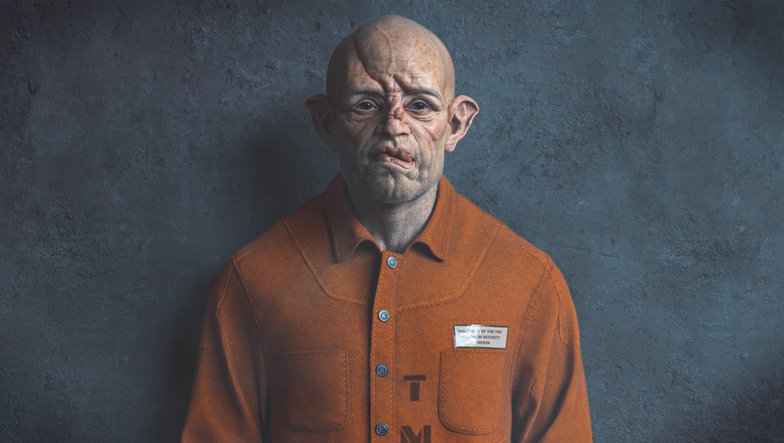 To start things off, I opened up my story and highlighted the descriptions I had of this character. I took things like where is he from, how old is he, any physical appearance descriptions or anomalies he might have. After reading that a few times, I created an image in my head of how I would like him to look. Then, I opened up ZBrush and started sketching. I was not trying to be too careful or have the anatomy perfect. I wanted to get the idea from my head onto the canvas as quickly as possible.

After I got the initial sketch done, I took a moment and started fixing the major anatomy mistakes and lumps I introduced during the initial sketch. I started adding more secondary shapes, smoothing the brush strokes and making sure that the proportions were right. One thing I did differently with this model than what I normally do is I broke the symmetry very early on in the design sculpt stage, so the entire sculpting process after that was asymmetrical. I didn’t go to wrinkle and pore details at this stage, because I wanted to apply topology first.

After the clean up stage, I took a head model I had from a previous project, and I used ZWrap to transfer the topology to this character. Doing this is very easy and it saves so much time. After you load the plugin, you need to select the same features on the model with topology and the sculpt by placing dots. That will tell the algorithm where the placements of the features are and than it will wrap the topology on the sculpt. Once this was done, I re-projected the details from the sculpt to the new model.

With the clean topology in place I started really refining the shapes, making sure that they looked believable and that the volumes were right. Then, I started adding wrinkles and pores and skin details without using any alphas or scans. If I needed specific pores or groups of pores, I would take a plane, sculpt that real quick, make alpha out of it, and start using that to detail up the model. This is a technique that I discovered by a great artist called Kris Costa and wanted to give it a try.

Once I finished with the sculpt of the face, I tried a few renders in Maya, and I felt like I needed to have a body to tell the story better. So I went back to ZBrush, quickly sculpted a basic human body that I could use as an avatar in Marvelous Designer, and designed the clothing. After doing the design, I did a quick retopology of the clothing in Maya, and then took it to ZBrush to get some details sculpted.

When I had the final model of the character done, I started to play around with the composition to figure out what kind of setting I’d like to have for presentation. I settled on a simple backdrop that will be driven mostly by texture, and a hard surface base where the character would stand. I then built the shoes, the cuffs around the arms, and started doing some test renders. 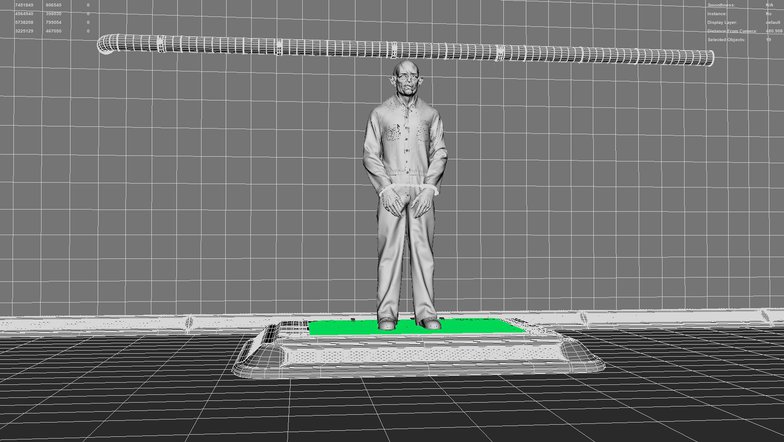 For the texturing of the skin on the face and hands, I didn’t do anything complicated. I pretty much Polypainted the model in ZBrush. Then, I used the new feature Adjust Colors, under the Polypaint menu. I desaturated the texture all the way, and manually started to paint the specular map. Once that was done, I painted one more map for the intensity of the Micro displacement map, which was a tiled texture that I created using the pore alphas that I sculpted earlier. This map was used in the bump channel to break up the specular.

The clothing was textured using Substance Painter. I created one type of fabric that would mimic old prison clothing. I started with a fabric material that comes with Painter, tweaked the parameters to get a good base, and started to layer some effects on top to make it look torn and bleached, and weathered. Then, I created a second fabric with a different pattern, and painted a mask to blend between them. To finish things up, I added some decals and painted stitches around the seams.

Although I was not going to do a crazy hair style for this character, I still wanted to add slight hair and beard to increase the realism. I used Xgen to add hair, and that was done using the placing guide method. I duplicated the head mesh, extracted polygons where I like beard and hair to grow from, and attached Xgen Collection to it. Because it was a simple hair and beard, I just placed a few guides to give the fibers direction, added a few modifiers like clump and noise, and called it done. I did the same thing for the peach fuzz on the face and the clothing, and eyebrows and eyelashes. 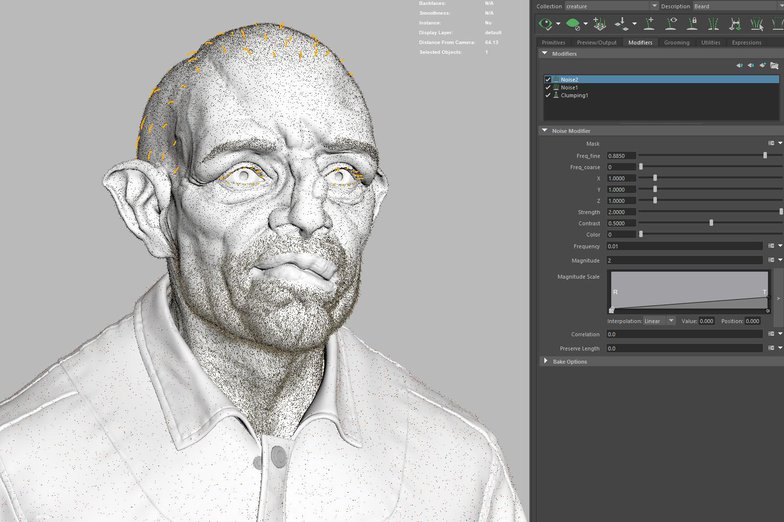 The lighting was done using Arnold for Maya. I started by placing a Dome light and loading an HDRI image. I got a free HDRI from this website: www.hdrihaven.com, and then placed two more lights; one Key light (with slight-blue color) and Rim light (light-grey color). After that, I added an Atmosphere Volume node to the scene and plugged aiNoise in the color, and tinted it blue.

The final composite for the project was done in Photoshop. I used the Adobe Camera Raw filter to adjust my colors, and then I started to add some of the render passes on top to enhance the look. For example, I used the Specular AOV on top of the Beauty render on Add blending mode, and painted a mask so that it was visible only on the lips, eyes, and the nose. After that, I added film grain and chromatic aberration, and started to design the UI. The entire UI was designed in PS, and placed over the renders. 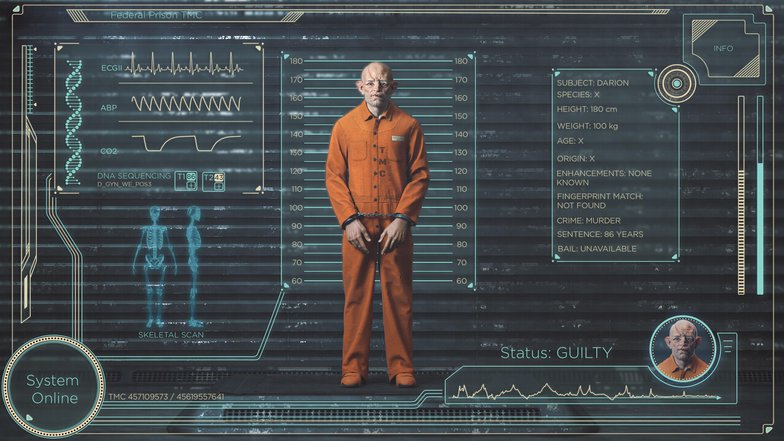 It is always good to do multiple renders with various different light setups to make sure that the shaders and model will look good under any lighting condition. 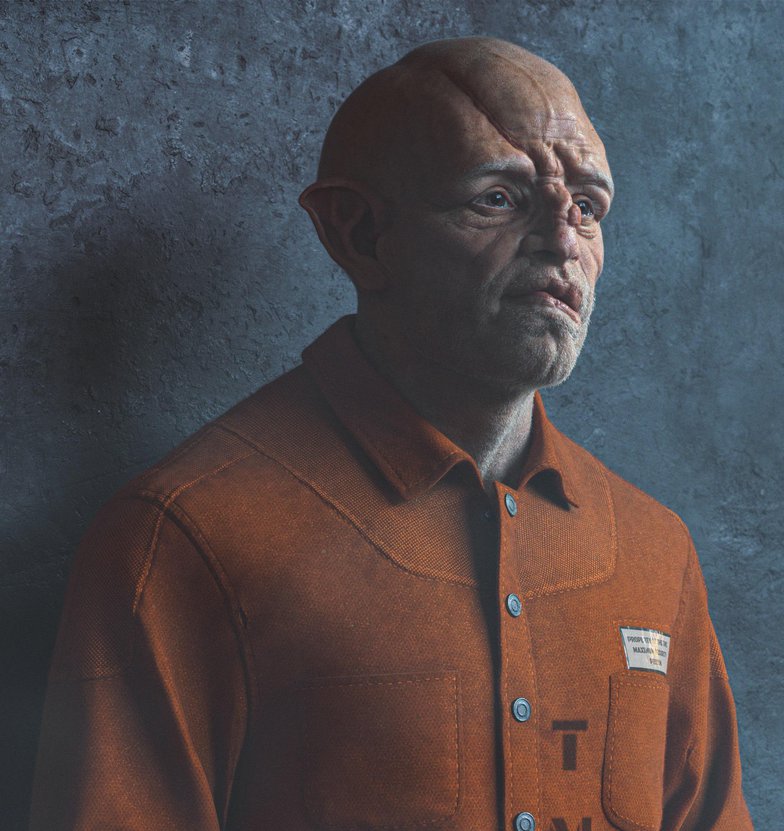 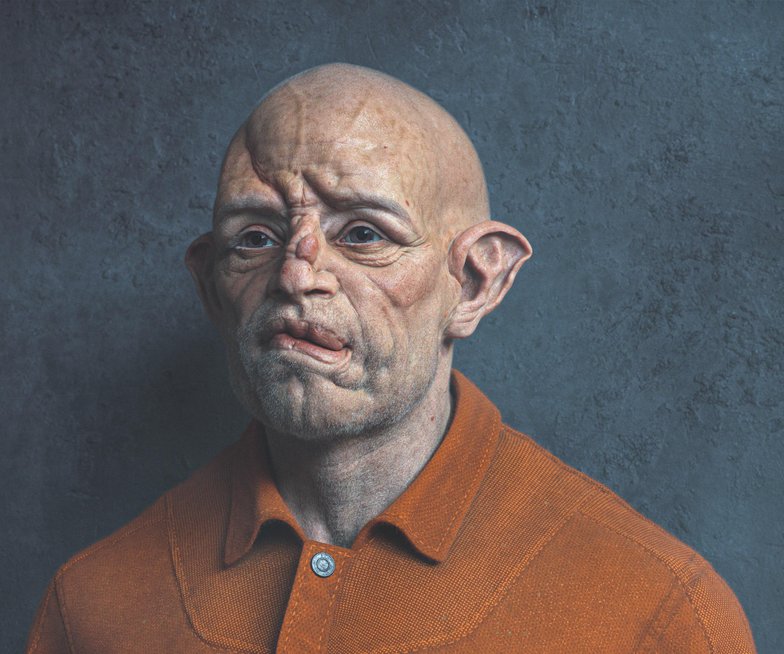