In part 2 of Jakob Scheidt’s 3D character creation in Blender series, he continues the modeling process of the Firefighter, including assets, techniques, modifiers, and UVs…

Hello! This is the second part of the character creation series, with the focus on modeling the individual assets of the firefighter in Blender. This will include some modeling techniques and guidelines, using modifiers and retopologizing the simulated or sculpted clothing. We will end up with a full character with optimized topology that is ready to be textured. Part 1 can be found here. 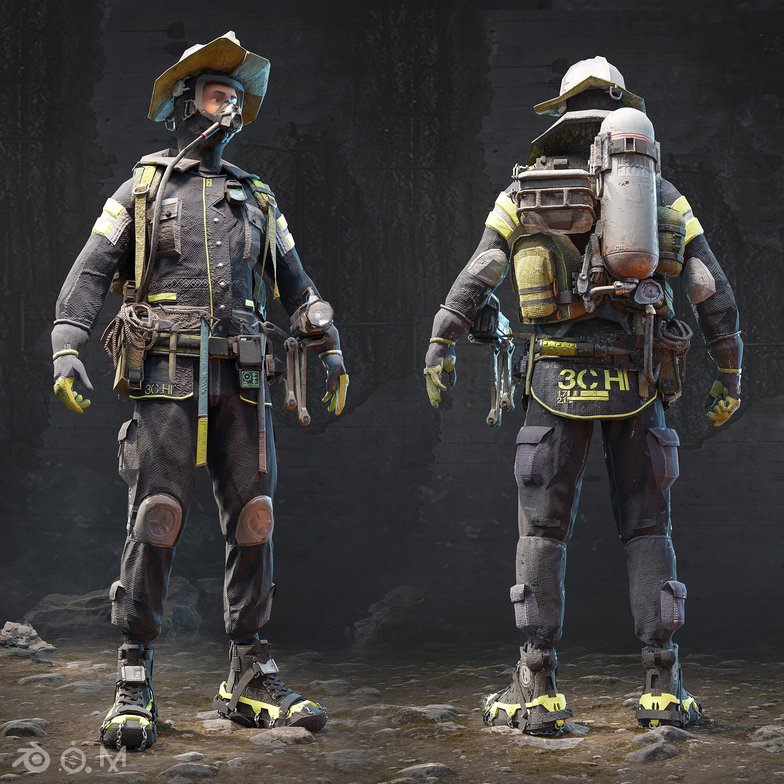 I made sure to include different camera angles, orthographic views and design variations in my concept. Some drawings can be used as a blueprint in Blender to make modeling faster. The primitives I used to block out the character will be replaced by the final, more detailed models, but are very useful for arranging the properties of the character.

I used reference photos from the internet as a guide for modeling. With the bottom view as a background image I start modeling the 2D shape of the sole and pay attention to the internal patterns that I want to extrude later. My goal is to use as few polygons as possible for the base of the shoe, as the spikes will add a lot of detail to the silhouette. I wrote a full article on modeling shoes) that goes into more detail. 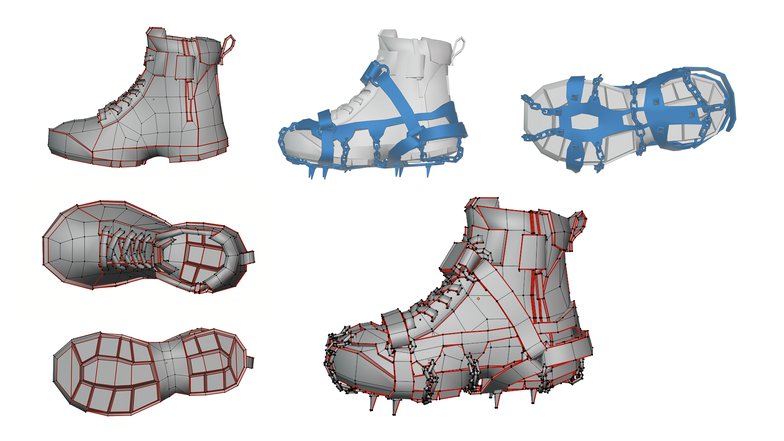 I use the simulated mesh created in Marvelous Designer as a snapping object for the retopology object. All the small folds and wrinkles will be included in the normal map, at this stage I focus on a smooth edge flow that defines the form of the model. With face snapping activated I first extrude big main loops and get more detailed afterwards. At the end I sharpen (Ctrl+E) some edges and set the shading to smooth.

For the hat I stated with a sphere cut in half and a circle. Proportional editing (O), some basic transform operations and some extruded loopcuts are the main tools I use for modeling. For the high poly mesh I bevel some edges, but for the low-res object I just create a sharp corner. The approach for the mask was to first draw the 2D shapes in orthographic view to bend and extrude them afterwards. I use some modified primitives for bolts, rings and other details. It makes sense to reuse these small details for other assets to save time. 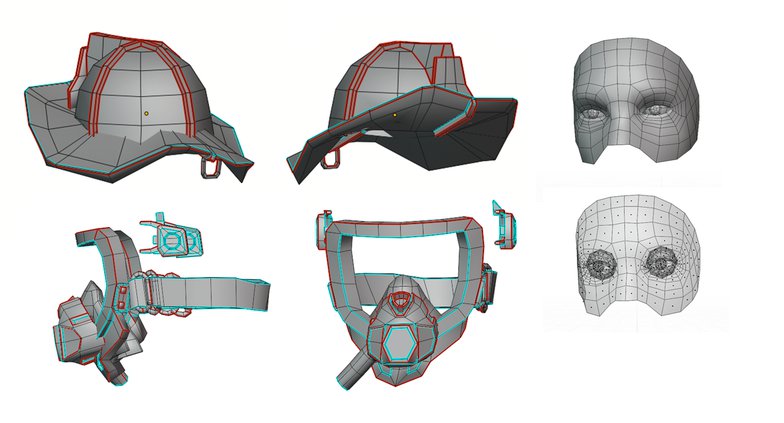 It’s always a struggle for me to create hands and gloves, so I use a mirror and a lot of reference images. The first step is to sculpt the glove without a pose. Then I retopologize the forms with the same techniques shown in step 3. Pay close attention to the edge flow, spiraling loops can cause problems later on. 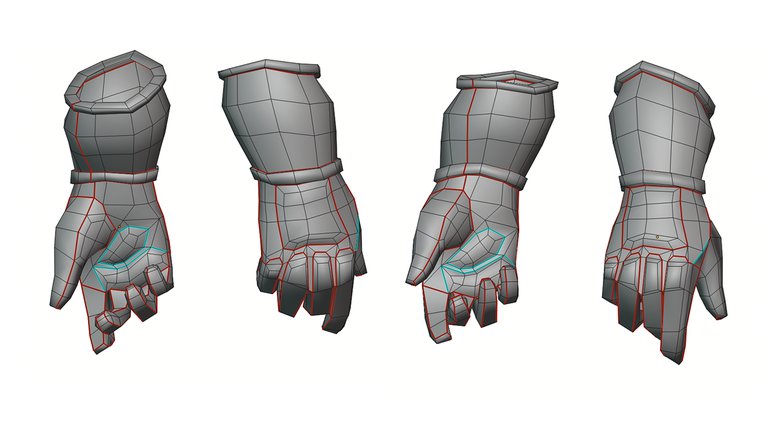 I have positioned all the tools that will be connected to the belt in the previsualization model, this is important to be able to model the different connections. I start with a circle and use the shrinkwap modifier to snap the vertices to the clothing. Then I use loop cuts and extrusions to add more definition and detail to the shapes. I also reuse some small details that I modeled earlier and change the proportions until the design looks balanced. For the backpack construction I also model a 2D shape and shrinkwap it to the surface of the clothing. You can activate the loop tools addon to create circular holes in your mesh.

The solidify modifier can be used to add thickness to the models, I use it with the ‘only rim’ option to avoid unnecessary faces at the back of the model

The tools are a focal point of the character, so I make sure to spend enough time on the design and the level of detail. With the drawing in the background I model the sides and add thickness using the solidify modifier. For the handle I use a cylinder and the loop tools addon to add holes. It can help to think about topology before modeling, I add a mental grid to the object I want to model, before I get lost in the details. For the tools I also reused geometry I modeled earlier or for a different project, I add all the assets I create to my personal library of parts to reuse.

After modeling the overall form of the parts I switch to sculpt mode and create a more organic form. As you can see, I reused the zipper, some connections and other details again to make modeling faster. The model on the right is just a variation of the second one from the left. For the rope I used a curve with a low resolution converted to a mesh, duplicated and adjusted in sculpt mode.

It helps to model these assets in the default rotation, but I add a keyframe to preview the model with the correct position and scale on the character

I started with an extruded sphere to create the main volume of the asset and duplicated loops to create details. For this model I simplified most details a lot, the connection of the pipes doesn’t make a lot of sense probably. Smaller details will be added using a normal map, or you can create a highpoly and lowpoly version of the model and bake the details later. 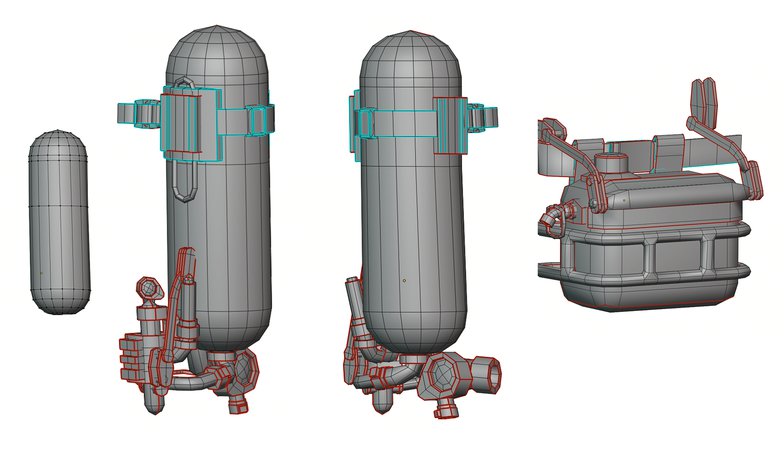 For some parts it makes sense to apply the modifiers (mirror, subdivision surface etc.) after adding UV seams

Before moving on to UVs and texturing I take another close look at the model to finalize it. I add more details to focal points, but it is just as important to include areas of rest or small texture detail. Changing the proportions also has a big impact on the appearance and silhouette of the character. At the end I take a look at the topology, I remove unnecessary loops or faces.

To make modeling faster I don’t start every model from scratch - I use base meshes, kitbashing parts and geometry I created for other projects. When duplicating a model multiple times, you can modify the shape slightly to avoid noticeable patterns.

Read the other parts to this 4 part tutorial