The Scan 3XS GW-HTX35 is a monster of a system, with dominating performance in every respect, and a price tag to match. James Morris takes the workstation for a spin...

The Scan 3XS GW-HTX35 is a monster of a system, with dominating performance in every respect, and a price tag to match. James Morris takes the workstation for a spin... 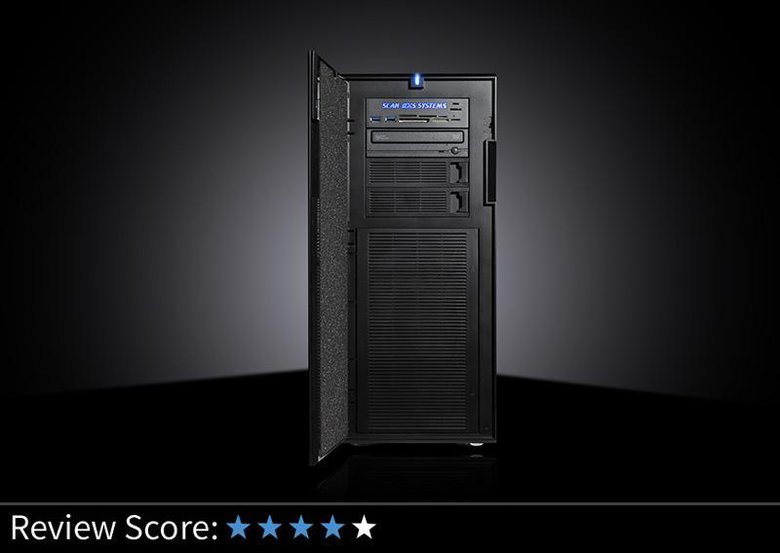 A few weeks ago, we looked at a Fujitsu workstation incorporating AMD's top-of-the-range FirePro W9100, a whopping near-£3,000 graphics card with 16GB of GDDR5 memory. This time, we have our first peek at a system sporting NVIDIA's brand-new Quadro M6000, a similarly priced 3D accelerator with 12GB of GDDR5 memory, based on NVIDIA's Maxwell generation. The system comes courtesy Scan, and it's a whopper in every sense – the perfect complement for the high-end NVIDIA graphics.

The Scan 3XS GW-HTX35 is based around a pair of Intel Xeon E5-2687W v3 processors, each with 10 physical cores and a nominal frequency of 3.1GHz. But Hyper-Threading doubles the virtual core count to 20 each, and there's a top 3.5GHz Turbo Boost mode. The 2 processors are backed up by a healthy 64GB of the latest DDR4 memory running at 2,133GHz and offering quad-channel performance. So that's a pretty potent platform for the new NVIDIA graphics. 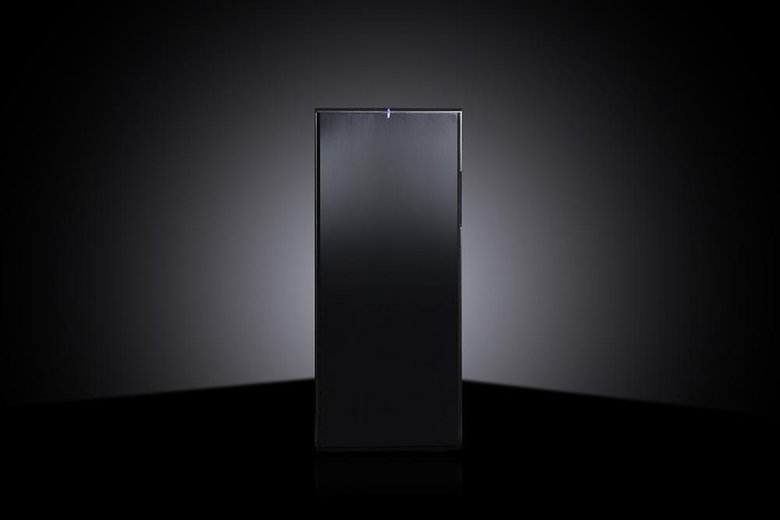 The NVIDIA Maxwell generation has been available in a selection of consumer-grade graphics for a little while, but the M6000 is one of the first Quadros to benefit from the update. Other Maxwell models are, surprisingly, the much lower-end Quadro K620, K1200 and K2200. The M6000 is a very different beast. Where the Quadro K4200 sports 1,344 CUDA cores and the K5200 a whopping 2,304, the M6000 dwarves them both with a humungous 3,072 CUDA cores. The core clock is ahead of the lesser high-end models, at 988MHz. The 6.6GHz memory clock and 384-bit bus width means the 12GB of GDDR5 frame buffer offers a huge 317GB/sec bandwidth - 65 per cent more than the K5200 and noticeably quicker than the Kepler-based K6000, too.

The remainder of the system is relatively standard for a workstation in this class. The 2 processors are kept cool using a water-based system, which leaves the interior relatively neat and spacious, but this isn't the quietest in its class we've seen (or, rather, heard). Storage takes the usual workstation form of a solid state disk for operating system and applications, plus a regular mechanical hard disk for more general storage. The former is a capacious 512GB Samsung 850 Pro, although this is a SATA-connected drive, rather than taking advantage of the faster PCI Express-based M.2, because the Asus Z9PE-D8 WS motherboard doesn't offer this connection type.

"The GW-HTX35 provides amazing performance across the board"

The hard disk is a 2TB Seagate Barracuda 7200.14, which is again reasonably capacious, although 4TB drives are now starting to appear. There's also a Samsung SH-224DB DVD rewriter and multi-format memory card reader with a couple of built-in USB 3 ports. Alongside the two USB 3.0 and two USB 2.0 ports on the top of the chassis, you won't need to be rooting round the rear of the system to plug in any everyday external peripherals. Two hot-swap hard disk bays are available beneath the DVD rewriter, too. So the system has pretty much every storage requirement conveniently covered. 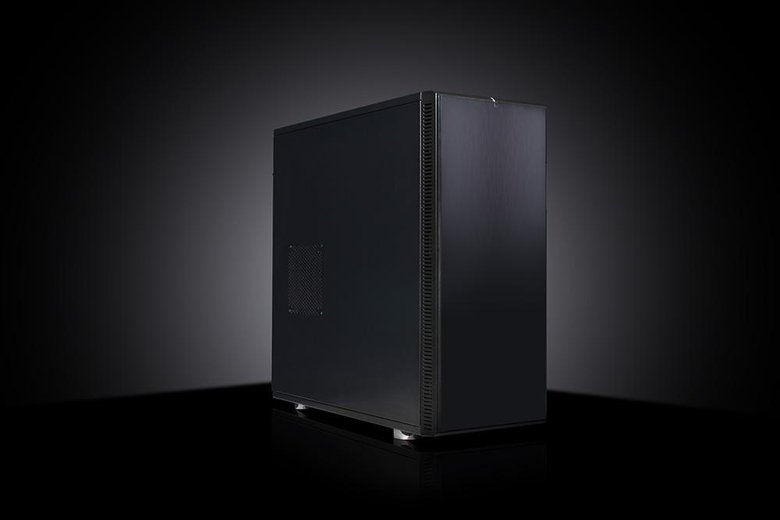 This is a huge full-sized tower workstation, but lurking inside are two ten-core Xeon processors and the most powerful workstation graphics currently available

The GW-HTX35 provides amazing performance across the board. In Maxon Cinebench R15, the rendering score of 3,063 is the largest we have witnessed at 3dtotal. We have seen a couple of scores surpass the OpenGL result of 174.23, but only by a small amount. This is still a great result. The SPECviewperf 12.02 numbers, however, blow everything we have ever tested out of the water. The catia-04 score of 131.56 is 50 per cent higher than any other system we've reviewed, as is the maya-04 result of 104.25. The SolidWorks-based sw-03 viewset also produced a huge 134.29.

What is particularly telling is how much higher all of the SPECviewperf 12.02 results are than their equivalents from the Fujitsu Celsius M740 with its AMD FirePro W9100. The applications included in SPECviewperf 12.02 gain no benefit from multiple cores, and just a little from extra CPU clock speed in some cases. That said, the M740's Xeon E5-1650 v3 has a faster 3.8GHz Turbo Boost than the Scan's Xeon. Yet some of its scores were half of the GW-HTX35, showing the immense modelling power of the Quadro M6000 compared to the AMD FirePro W9100. 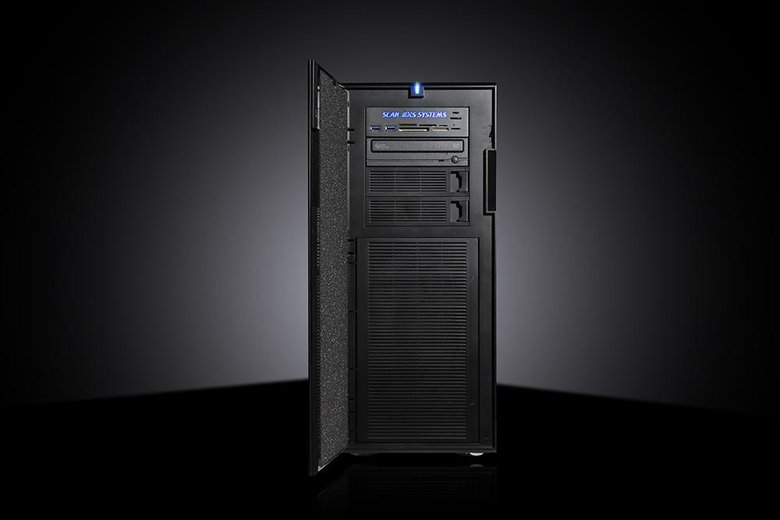 The Scan 3XS GW-HTX35 showcases the capabilities of the NVIDIA Quadro M6000 perfectly. It's a hugely powerful workstation, with no weakness in any area. Modelling performance is the best we have seen in all but Cinebench, and rendering abilities will only be surpassed by dual Xeon workstations using the 12-core and above options . These will be even more expensive than this system's 10-core options, which balance core count and clock frequency in a very advantageous way for a workstation. This is a hugely expensive system at just £350 shy of £10,000. But if you do want a workstation that can dominate in every single area, you get what you pay for.