Wondering about the cheaper alternatives to the Wacom options? Well wonder no more – we put the impressive XP-Pen Innovator 16 Pen Display through its paces…

XP-Pen have a fantastic array of products and a great reputation for making devices that compete with companies that sell pen displays for a much higher price. Over the last few years I’ve noticed an impressive evolution in regards to the quality of their products and branding as whole. What once felt a bit cheap and plasticy (if that is a word), has slowly developed into a set of devices made using top quality materials.

The same can be said for their branding and packaging. I remember receiving a device to review in a brown box with no visible branding on it at all. The device was good, but it did make me think I would be nervous about buying this as a paying customer. Jump forwards to today and their website and branding is perfectly in line with their high quality products, which gives a sense of confidence to a customer wanting to invest their hard earned money in a pen display.

So some great steps forward by a company really working on their customer experience and product quality. Well done XP-Pen!

The device I have been asked to review this time is the Innovator 16. So what is different about it compared to other tablets? It is sold as being the slimmest device available at just 9mm thin. It also has a selection of customizable shortcut keys on the side which I’m always a fan of and a dial which can be used for a series of functions which you’ll see in the videos. All nice stuff that works really well, but nothing you wouldn’t have come across before, although it does feel very sleek being so thin.

What’s inside the box?

I say this every review, I am useless with technology. I’m not going to detail the process of plugging it in and downloading the software, as frankly it is so easy anyone can do it. Setting up the device will be easy. There is an image below which demonstrates the lead configuration taken from the XP-Pen Website.

If you’ve read my past reviews you’ll know I have an issue with stands. If you’ve got a 16 inch device you need a good stand that can be adjusted to meet the requirements of whatever environment you are working in. It’s slim, cool looking and about as portable is it could be, but it offers one height. I find this restricting. I like it to stand up a bit more which isn’t an option. 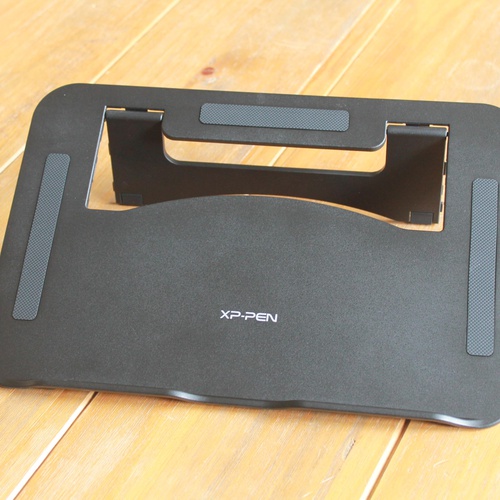 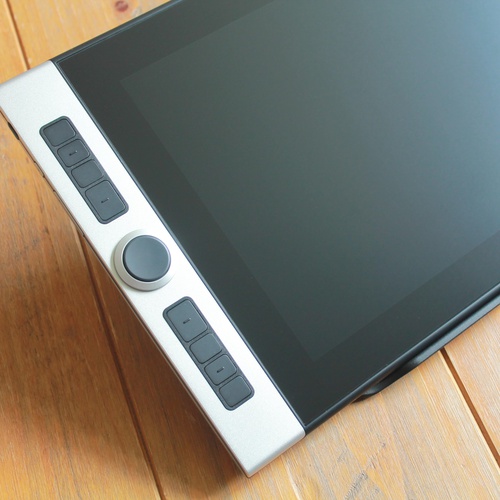 One of the main points XP-Pen draw attention to is the “freedom” you get from the device and how it can be used “on the go”. I would suggest this depends on what you plan to do. I would say an iPad Pro with Procreate is a truly “on the go” option, but you still need a laptop to plug this in to and it’s still pretty big at 16 inches. That said, if you plan to take it to and from work every day, and use it professionally, I would say it is probably lighter and easier to transport than alternatives of this size. So I would describe it as “free-ish” and “on the go-ish”. I think it’s best to think about your intentions with the tablet. If you’re aiming to move around and work from multiple locations and are looking from a top quality tablet that is light and thin, this is surely the best option available. Being in my mid 30s I’ve seen technology develop into thinner and lighter devices for years, but it really is quite remarkable that such a slender and light device can house  top quality painting tablet.”

It does look really nice. My photos dont really do it justice (I need to get a more insta-friendly office). It is a great design and very sleek. One small thing is that the power button is a bit obscured by the power lead, that is weird but not really a problem.

The stylus comes in a really robust tube too, which I do like as that makes it really portable without needing to worry about it being damaged. That is a nice touch and one customers will all appreciate.

The screen is vibrant and clear. I honestly can’t remember the last time I didn’t think that about an XP-Pen device though. They do a great job with the screens and the quality is good. 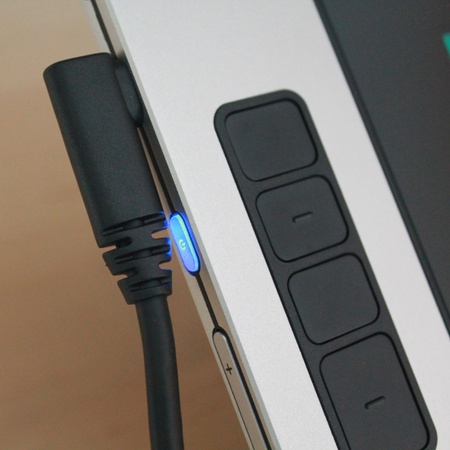 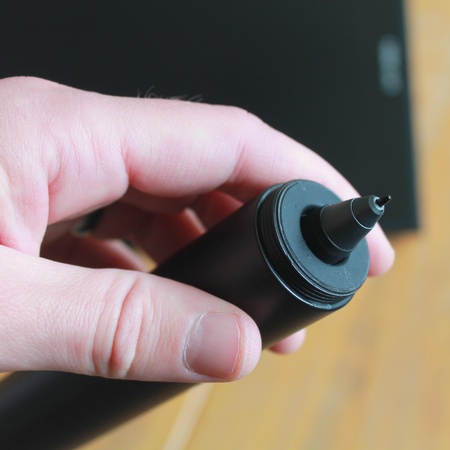 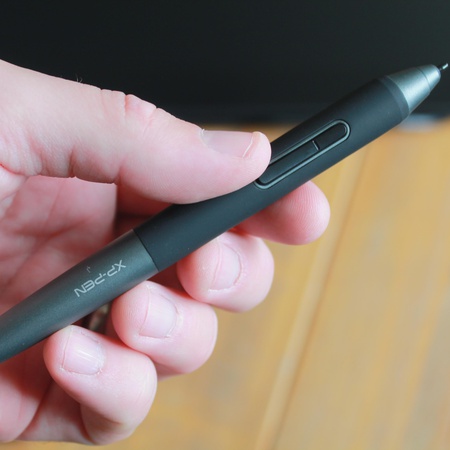 Taking it for a spin

I have a bit of a routine with reviews and I’m a creature of habit. I like to get on video the very first marks I make with the tablet. I set up a pen that varies its opacity and thickness in accordance with the pressure applied. It’s a pretty bland and boring pen, but it’s a great indicator of the way the device responds to my strokes and the pressure sensitivity of the tablet.

Honestly this device works every bit as well as you will want it to. It isn’t necessarily improved compared to the other devices I have reviewed in the past, but it will be exactly as you expect it to be. It is responsive, the pressure sensitivity is nice and the screen texture is lovely to work on. I would say it isn’t ground breaking, but it is very good.

It is really pleasant to use and the screen texture is spot on.

It really is unfair of someone to provide a review unless they have spent some time working on a painting using the device. So I worked on a quick ogre to see what I thought.

It really is nice to use. The textured surface isn’t new to devices like this, but it is a pleasure to use and within a matter of minutes you’ll forget you’re trying a device for the first time and just be in the creative zone.

Who can resist a quick ogre?

Really these reviews come down to a few things. Is it responsive to movements and pressure? Yes. Is the surface texture nice to work on? Yes. Does it offer features that improve your workflow and speed? Yes. If these are all positive answers it comes down to aesthetics and design and the extent to which you can benefit from things like hot keys and the dial. This passes all these tests with flying colors.

A quick preview of the ease of use of the dial.

So what’s the verdict? As an iPad Pro user I would say it falls short of a truly “on the go” product. It’s about as portable as it can be, but it isn’t as universally “on the go” as an iPad Pro (that wasn’t supposed to rhyme). But as someone without a lot of desk space who might want to use it on another computer in the future, I would say it is a superb product. I’m not a big fan of the stand and think the power button could have been positioned better, but the device itself is very intuitive to use, versatile and capable of helping you forget it’s even there, so you just focus on the painting.

I’ve reviewed a number of devices before, and liked a lot of them, but this is the one I would keep. The size is right for me, it is slim making it easy to take and use at another location and the dial and hotkeys give me options to help my workflow. I like this a lot. 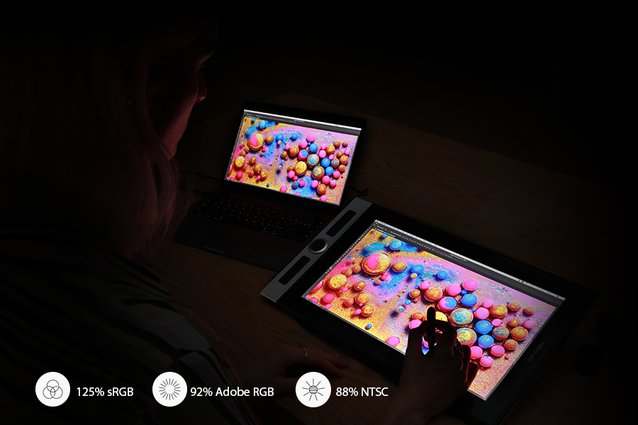 XP-Pen talk about the impressive “color gamut” of this device (being 92% Adobe RGB) on their website. The colours are definitely rich and vibrant and you will definitely be impressed with the quality of the display. I have to be honest though  this level of technical detail is above my head a bit, so I did a little research. It is basically the range of colours that the tablet is capable of accurately displaying, and as is often the case the higher the number or percentage the better. This device displays at 92% Adobe RGB. To give you an impression of how good that is, a Wacom Cintiq Pro 16 UHD displays at 85% Adobe RGB and that device is roughly £1000 more expensive. This is definitely impressive and should really be considered carefully when comparing this device against others available.”

In the UK this is retailing at £449.99. I’ve reviewed devices a lot more expensive that this in the past and can tell you quite plainly this represents good value for money. If you’re after a truly on the go option for painting outside or curled up on the sofa, you want an iPad Pro. If you want a device to take to work and back home again, or even to just leave on your desk at home, this is the one for you.

I always get questions about compatibility, so I’ve grabbed the image below from their site to help you with that question.  I’ve used the tablet in both Corel Painter and Photoshop as I’m more of a 2D guy. Every time I do a review like this I get some questions about compatibility though. I always get asked about ZBrush, 3DS Max, Maya and Blender which it is compatible with, but the list also includes a huge and diverse collection of software types so compatibility won’t be a problem.”

If you’re looking for a pen display tablet, make sure you take a good look at this one before spending your well earned cash.