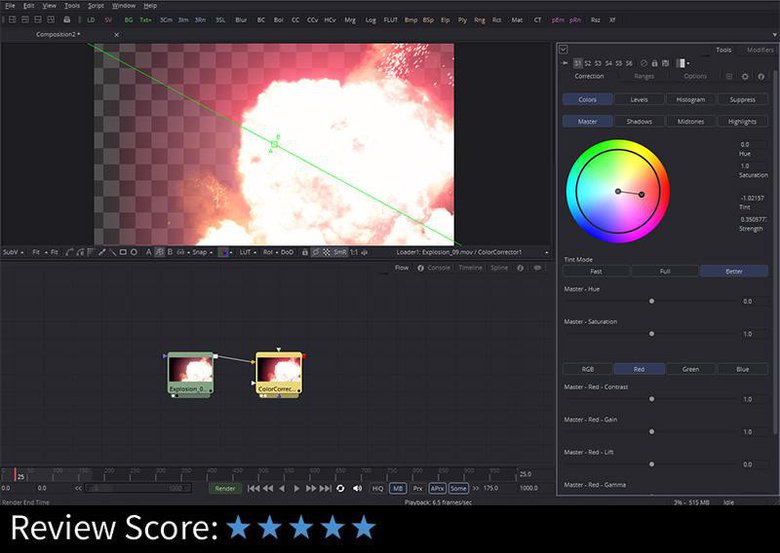 Fusion is a piece of software that might not be on everybody's radar as a useful piece of VFX software but Blackmagic are on a mission to change that and since they took the software on from the original developers (Eyeon) they've taken the first major steps to raise the profile while increasing the accessibility.

The most recent release, version 8, is the first to be available on both Windows and Mac OS and what's more there is a fully featured free version. 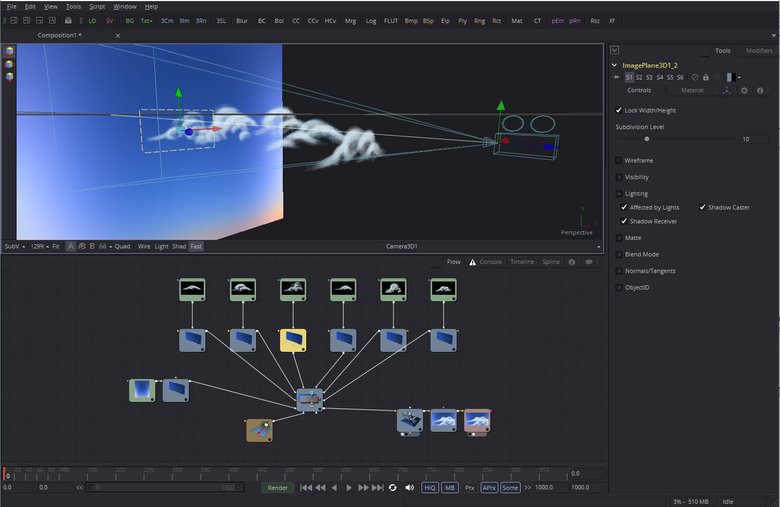 A typical workspace, with a 3D environment above, the attributes/controls to the side and the workspace below. The app can be infinitely adjusted to suit.

Fusion is a difficult application to pigeon-hole as it is so capable in many areas. As a pure compositor it handles anything you can throw at it, reading just about any file type you can think of, including 3D files, from OBJ to FBX. The 3D workspace is clean, fast and particularly intuitive. Navigation is a doddle and the logic of the nodal workflow should see any artist picking things up in next to no time.

Fusion also comes with a fantastic particle engine which is fast to set up and render. Emission can be from objects or standard emitters, as well as being driven by textures, so, remembering how Fusion works, you can generate particles from really advantageous places. Imagine you had some background footage of an oil slick on a road. You could use the masking tools to generate a copy of the footage where only the oil is visible, add in a little noise with a merge tool and then use the resulting image as an emitter to generate smoke or flame from your 2D plate. If you want more depth you could just project that onto a 3D image plane and have depth of field too, or a rack focus.
The system really is powerful but logical and simple. 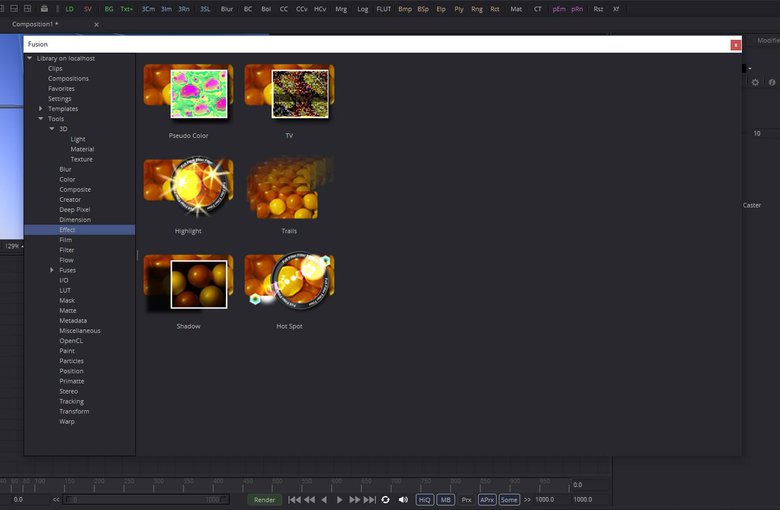 While learning Fusion and its tools it can be useful to access tools via the bin, with its graphical previews of functionality.

The masking tools mentioned earlier are some of the best around, with a selection of keying tools, so there is always a good solution to hand. The quality of the keyers is great and provide various ways to remove areas from your footage, and there are some very useful painting and cloning tools too, so if you ever need to extend the set behind your talent and build a fake camera move, that is a simple task with Fusion.

Certain other tasks can be done in post too, as there is such a wide array of tools to work with. Add a simple blur tool to a background, and another to a foreground element and animate the strength of each over time and you have a lovely focus pull.

Apart from the huge selection of tools that really go a long way to making Fusion a true workhorse, it's the workflow that is the killer feature, albeit a silent, unnoticeable one. Working with nodes might feel a little alien to a newcomer, but in no time it becomes second nature, and you won't look back with fond memories of layers. Nodes are just too versatile and useful. Image working in a comp with all the power and functionality you may have had elsewhere, but without the need to create precomps. Now you see the benefit of Fusion. Not only that, but Fusion has a wonderful Spline editor, housed in a tabbed part of the main workspace. Animating and then manipulating keyframes is so easy, and there are some great tools for looping. 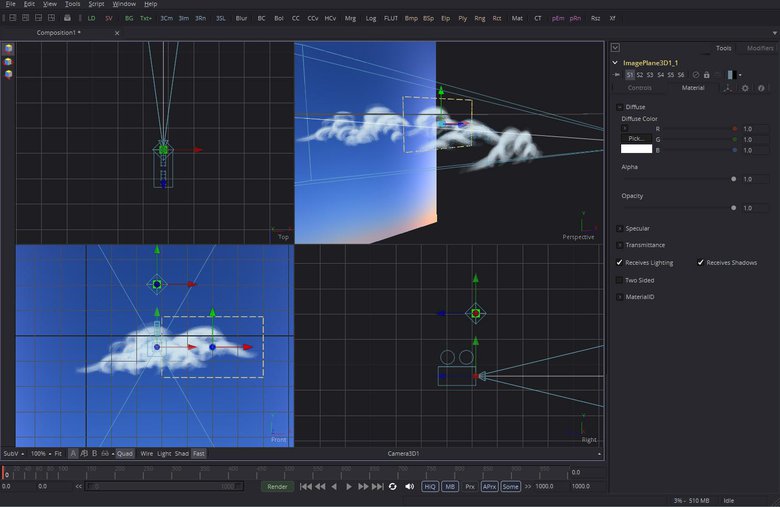 For those used to working in a full 3D environment there's a traditional quad view, making for easy placement of scene objects.

For me at least the true joy of Fusion is the fact that it isn't restrictive. You don't have to learn to fit its quirks. There are a multitude of ways to reach the same conclusion, making it easy to fit the software to your preferred ways of working, not the other way round. As an example, let's take adding a tool. You can press Ctrl-and-click to access the tools menu, or you can right-click in the workspace view, or you can keep the bin open. The bin is a bit like content browsers in other applications, with graphic hints to each tool's functionality, as well as a name. Other things, like merge tools autolinking to an already selected tool, makes quick work of setup, and there are just too many useful little elements of Fusion to mention.

"The system really is powerful but logical and simple"

If this review feels a bit like gushy fan fiction that's because I truly can't find much negative to say. In fairness some GUI elements could feel fresher and the Mac public beta is still less than stable, but in all other regards Fusion should rule the roost when it comes to compositing solutions, and if BMD continue the way they are, it soon will. 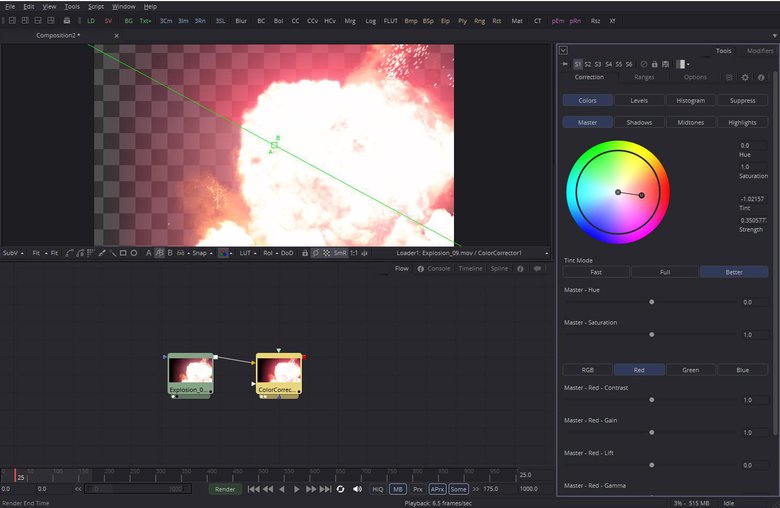 Combining viewing tools with things like a color corrector makes for powerful adjusting and/or grading, with adaptable A/B splits.