“Look deeply into any of his stand-out creations and you’ll find detail way beyond what you first expected.” Join us as we explore some of the work and thoughts of renowned artist Toni Bratincevic, following his departure from Blizzard to NVIDIA, getting the low-down on his career, and hearing about his excitement for the continuing development of digital art.

Back in the early 90s, Toni Bratincevic was an impressionable teenager living in Kastel Sucurac, in southern Croatia . He was playing with his friend’s Amiga 500, creating scenes with applications like Fantavision and Read3D. He was spurred along by some creations he saw in computer magazines he read at the time.

Once he’d saved up for his own PC, one of the first programs he used was 3D Studio 2.0 for DOS. “Creating scenes and characters in 3D was mostly my hobby in the beginning, but at one point I decided to learn professional software like Alias Maya and begin pursuing my career,” says Bratincevic. “I attained a degree in IT, but I am a self-taught artist.” Toni had (and still has) a laser focus to improve his skills, working on many personal projects, usually static 3D images.

“With every new image I created, I tried to challenge myself in a different way, to evolve my skills and create something new every time.” This discipline set Toni on the path of constantly learning new stuff, which he still does almost each day, even after twenty-plus years. “This is a fast-evolving industry so one needs to always be on top of their game,” he adds. 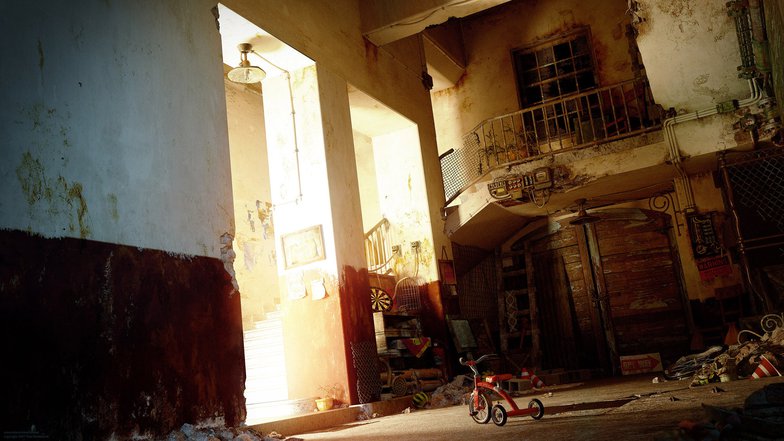 There are so many images in Toni’s arsenal, it’s hard to push one ahead of another. Look deeply into any of his stand-out creations and you’ll find detail way beyond what you first expected. A case in point is the image above. It Was You began as a personal project, primarily used by Toni for learning Maxwell, a new render engine he’d installed. But there’s even more to this. “At some point, I decided to wrap a small story around the scene,” he says. It is a fictional story about a boy who experienced a vision when he was very young, which later turned out to be a moment of birth of a special person in his life.”

“The scene hints at a blinding flash coming out of the stairwell with the tricycle sitting alone at the base of the steps. One can literally feel the dusty plaster of the walls. “The environment design inspiration came from one place where that person used to play as a child, an old dirty house, almost abandoned, but with a great character,” Toni says.

“I was always inspired by environments that have a history, more than something shiny and polished,” he continues. “A lot of images that I’ve created are reflections of my life, stuff that has happened to me, sometimes to others, and It Was You is one of those images that goes back to the moment when I met my wife and derives some concept from that experience.”

When Toni starts creating his scenes, he would usually begin with a simple blockout. He creates basic shapes and sets up a camera angle to establish a good and strong composition. After these important structures are locked and ready to go, he then polishes the many elements, creating new details, and develops additional ideas around it. 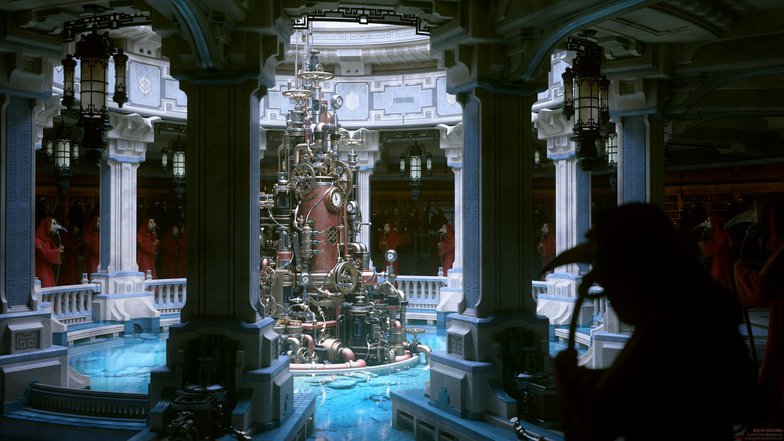 Another image of Bratincevic’s; Age of Vultures, has a lot of back story. In fact, a whole lot of his work has, due to the intricate detail in modeling and lighting put into each creation.

Almost all of the modeling for this image was done in 3ds Max. Some sculpting work was created in ZBrush, and texturing in Photoshop. Age of Vultures was made for a Redshift competition and is still used as a Redshift benchmark.

“The story behind it is to illustrate how group or herd mentality, or any form of ideology, being religious, political, social, can partially deprive people of their individualism and ability to think on their own”, Toni explains. “This story is a very important element in the development process, since it helps me make artistic decisions about what to model, how to texture, and how to use light in the best way to express my message behind this idea.” 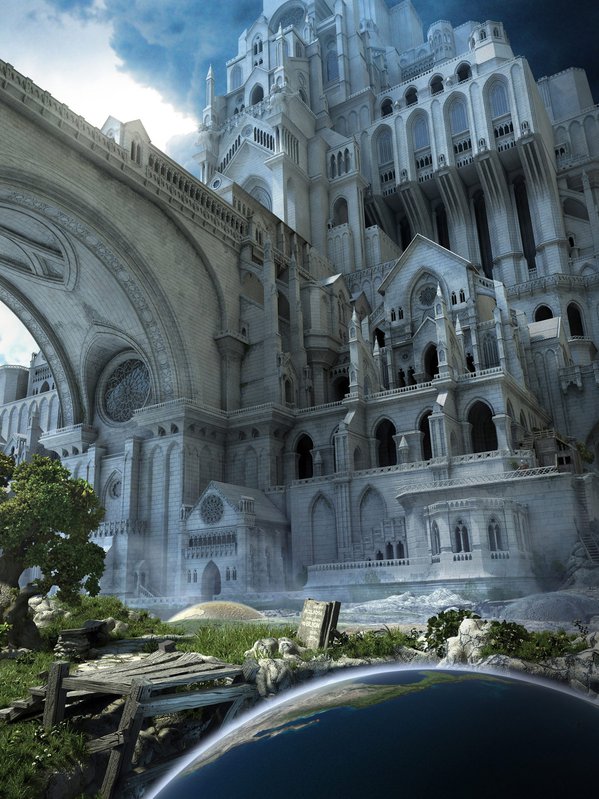 In the earlier days of the web, many communities emerged online for an almost seamless collaboration for digital artists literally from everywhere on the planet. CGTalk, CGSociety, 3dtotal. While this is pretty much taken for granted now, it was an exciting time for a creative back then. Toni remembers working on a machine that was very slow by today's standards, rendering The World Above in a couple of layers so it could fit on his machine's memory. Good times!

“Community back then used to be very different,” says Toni. “I remember posting stuff for online competitions and getting back so many comments and critiques. That is one of the biggest differences I remember. People were very open to critique; they knew that that was one of the best ways to improve their work. I was one of those artists who, by participating in those competitions, gathered so many tips and tricks on how to become better and finally with that knowledge, land a job in the industry.”

“There are still a lot of art competitions online these days, but it is not the same vibe. The world has changed and with it, our industry,” he adds. “We could say that we are all more professional these days, more industrial, but there was something special back then, we all had a feeling that we are participating in a development of the industry that was still in its infancy, and helping it grow with our hard work and contributions.”

After a lengthy, concerted effort, Toni Bratincevic finally made the move to the States. He emigrated from his home country, across the Atlantic Ocean, to take up an offered position at Blur in sunny Santa Monica in California. We caught up with Toni in Los Angeles back then and asked him about his new life in 2012. “I was first hired by Blur as a scene assembler,” he says. “Since it was a high-end studio, and I was coming from a studio with just three or four people in Europe, this was a big jump for me. I remember the first couple of months starting at the studio were so very hard. There were so many good artists around me pushing the quality up. As an artist, I was still a bit immature, trying to catch up.”

“After a while though, they told me I was doing a great job and I should just keep pushing, so things worked out in the end.” Later on, Toni was able to lead projects as Scene Assembler. He also worked on multiple projects, from Star Wars cinematics, to an internal Deadpool CGI short which kickstarted the Deadpool movie later on. (The director of Deadpool, Tim Miller, was also the founder and co-owner of Blur.) “In those four or five years at Blur, I worked on so many projects,” Toni explains. “The deadlines were tight and I had to figure out how to deliver high quality art within those short schedules. Blur was a great company for my career, definitely the most important choice I ever made.”

People were very open to critique; they knew that that was one of the best ways to improve their work. I was one of those artists who, by participating in those competitions, gathered so many tips and tricks on how to become better and finally with that knowledge, land a job in the industry.”

Interactive and real time rendering was always a dream for senior artists like Toni who’d started in the game, some 15-20 years ago. He told me about the challenges of real-life deadlines, working with the technology he knew as cutting-edge back in the day. “Before, we used to do scenes with just a wireframe representation on the screen. We’d have to guess how the scene would look once rendered. That takes time and patience, but we pushed through those early times somehow,” says Bratincevic.

Today, real-time raytracing is progressing forward very fast, starting to be used in videogames. “It has changed the way we all work. We are able to ‘look-dev’ a character or any asset and as you are playing, we see all those changes in IPR with raytracing – that is a major boost in productivity. You are basically seeing the final product as you are working on it. Because of all that, it opened a space for many other artists who are a bit less technical to jump in and work in this industry. Competition is always great, and this can benefit all of us in the end.”

Toni is always so open when it comes to the advice for those starting out. He says that networking is really important, and the only way to get noticed is to work hard and go public with your art. Many gallery sites are still available to strut your stuff. “It is also normal these days to see many freelance artists working for big studios, but from other countries. In case you can’t move, this is always a great option.” But he does qualify being a part of the studio, going to work and being with other artists can be extremely inspiring and good for developing artistic skills.

“I strongly believe that the videogames industry has a lot more potential for growth. It can be driven by advances in technology,” he shares. “Using free engines like Unity and Unreal are an easy way to form small teams and develop your own games. These engines have opened a space for amazing innovation where even smaller players can compete with bigger studios. Recently, it has become almost irrelevant where you are in the world. The idea of being physically present somewhere to work on a videogame with your team is not that important any more. I can’t wait to see where these advances lead us in the future.”

Around two years ago, Toni Bratincevic was promoted to the Principal Artist position at Blizzard Entertainment’s cinematics department. He worked on many projects, like the WoW, Starcraft, Overwatch, Diablo, and Hearthstone cinematics. One of his favorite projects was the Diablo 4 announcement cinematic which he worked on as Environment Lead. “I created a lot of environment 3D concepts on that production, with a great help from my colleagues and temp artists,” he says.

“Then I moved to the Digimatte (3D Generalist) department where second and third opening shots for that cinematic were created. There was a lot of work on assembling environments, creating props and assets, modeling, and texturing those assets and lighting two scenes. Very fun project to work on and even more fun seeing people's reaction from that year’s Blizzcon.”

Toni Bratincevic recently left Blizzard Entertainment after almost 10 years. This was a huge decision for him and one he pondered for a long time. “I had a lot of fun at Blizzard and there were some great working conditions,” he flags. “But, the chance to work at NVIDIA was so attractive. The opportunity to work with even more people I admire and with technology that has changed the way we all work, was so great. I literally can't wait to start working at a tech company that was one of the main reasons why 3D artists these days can do so many amazing things.”