A web-shooting superhero attempting to prevent the Staten Island Ferry from splitting in half is a signature action sequence created by Digital Domain for Spider-Man: Homecoming...

Spider-Man gets fully integrated into the Marvel Cinematic Universe with the teenage Wall Crawler getting his first solo outing with some help from Tony Stark, filmmaker Jon Watts (Cop Car), and Production VFX Supervisor Janek Sirrs (The Matrix). "The energy that Tom Holland brings to the role is refreshing," notes Digital Domain VFX Supervisor Lou Pecora. "We did motion-capture with him, and in-between takes Tom is jumping around and slinging imaginary webs. There are some scenes in the movie where he's doing this crazy stuff almost in the background and it was like that." Serving as the main protagonist is Adrian Toomes (Michael Keaton), who constructs mechanical wings with turbines. "We built the prototype out of the concept art, and shared the model and textures to a couple of other vendors," explains Pecora. "The trick was not so much how the Vulture suit looked but how it moved. The wings are made up of interlocking plates of steel that need to slide against each other but can't interpenetrate and bend. It was a real rigging challenge." 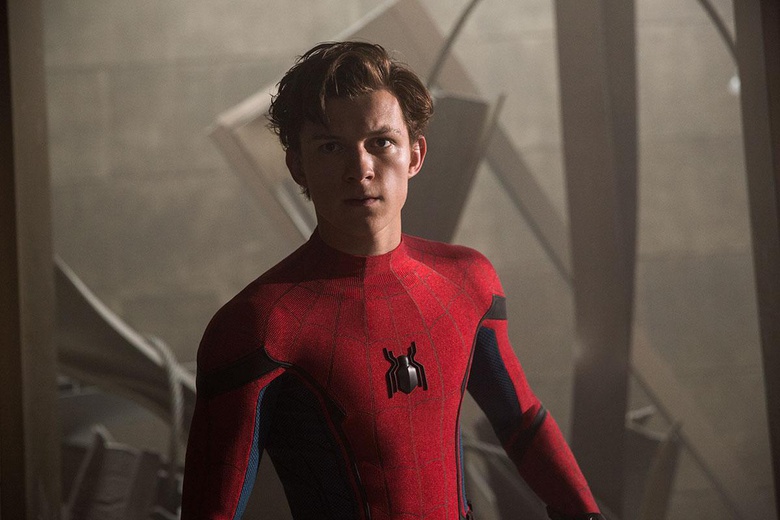 Outside of a weapons test in the workshop of the Vulture, the primary focus for Digital Domain was a nine-and-a-half-minute sequence consisting of 229 shots where Spider-Man attempts to thwart an arms deal taking place on board the Staten Island Ferry. "We built the Staten Island Ferry as we worked on the shots," remarks Lou Pecora, who had to produce four decks' worth of props that included chairs, ropes, garbage cans, and posters. "I spent a couple of weeks in New York on a docked ferry where we did a full acquisition of LiDAR and took photographs of another ferry. The partial ferry set in Atlanta was symmetrical. They all had subtle discrepancies from each other so we ended up Frankenstein stitching onto the Atlanta ferry." The ferry set was situated on a gimbal; the vessel could split into two and operated on 12 pistons. "It could go from fully closed to fully open in 10 seconds. The first time it closed I thought, 'There's no way that is going to go back together.' In fact, it went back too perfectly, so we had to make some digital modifications. SFX Supervisor Dan Sudick is a hell of an engineer to pull something like that off. He also had a dump tank that could pour 45,000 gallons of water and flood the entire set in under 10 seconds. It was incredible."

During the battle with Spider-Man, the Vulture uses an alien-powered weapon that slices through the structural foundation of the ferry. "The weapon is like a sawed-off shotgun with a Chitauri egg as the power source," remarks Lou Pecora. "It also has these crystals on the front of it that look like icicles that focus the beam. It operates like a Line Gun. If you see the guide beams there's the sense that, 'Oh, boy, he's going to shoot this thing.' It's not just this magical thing that can keep firing. It's got to recharge which adds to the realism." A YouTube video combining lasers and a campfire was a great reference. "It looked like magic. There's a whole lot of footage out there of lasers cutting through cigarette smoke and fog. The guide beams become rails that this plasma blast travels up. It moves fast. When the plasma blast hits something solid it takes a second to cut through, almost like acid dissolving. We wanted to bring it back to believable physics rather than being able to magically blast through all of this steel."

Spider-Man strains himself as he tries to pull the Staten Island Ferry back together again. "That was tough," admits Lou Pecora. "We motion-captured Tom Holland pulling on ropes, his reactions, and facial expressions. Under the suit you'll see his face emoting underneath. You can tell when his mouth is open or his eyes are getting big. There's a cool thing that they did with the suit where the eyes are somewhat expressive but you can't have them stretching and warping. They worked like the thin metal blades of a camera aperture. They slide against each other to open and close which gave it a real world mechanical feel." Spider-Man utilizes his signature webbing to hold the damaged vessel together. "We looked at spun nylon and real spider webs, but what we ended up deciding on was to model the webs after polar bear fur, which is a bunch of microtubes. The tubular quality refracted light in a more interesting way than if it was just a solid core like a fibre-optic cable. It looked interesting right out of the gate."

"The suit for Spider-Man was satin-y but they didn't want it to have a cheap feel," states Lou Pecora. "They had done a lot of printing with a thermal ink that did a dot pattern on the top of the suit which added another dimension to it. The dots end up being slightly different so you end up with little sparkles that would catch light at odd angles now and then. There's a certain sheen to it that evolves further away. But yet you don't want it to look oiled up like body paint. It was a delicate balance of those two. Method Studios built the suit and textures for it but then we had to come up with our own shaders and look development so to match theirs." Iron Man makes an appearance. "Iron Man's suit is never easy. We did go back and forth a lot with Marvel's art department and the studio executives with subtle changes like, 'He has three different tones of metal. Not two different tones of metal with a red and a gold. We don't want gold this time. We want nickel.' Then you have to figure out how to make it open and close, and how a guy flies around in it. He's dynamic. There's no way that suit would allow movement so we are constantly having to go back and forth with animation and rigging in order to stop the plates from sliding around and make it look like football shoulder pads."

For the atmospherics such as smoke and fire there were some practical elements on-set. "There were some cool sparks where one spark would pop out and branch out," remarks Lou Pecora. "We ended up matching that. Getting behind smoke, and preserving what was there but getting rid of the green screen behind that, or getting rid of the set rigging. That's always a challenge because you have to go over the top of it. Atmospherics and smoke to match it, keeping track of all of the smoke levels is difficult." CG water needed to be integrated with plate photography. Water isn't the kindest element to try to rotoscope and get behind. We had to match, replace, and keep what we could of it. In the top-down angles we could keep a lot of the real water and augment with CG on top of it. The beauty of something like that is that you have the best reference in the world because you have exactly what you're trying to match."

"The most exciting thing is when Spider-Man does that whole stitch up," notes Lou Pecora. "He goes the length of the ferry, weaving in and out between pillars and through fireballs and sparks using his webs, splitter webs, and web grenades. There's even a POV of Spider-Man's hand going out in front of him. It was super cool because every little kid, when you say 'Spider-Man,' they do that with their hands. You sit in the audience and essentially get to do that. It would be cool to do VR for that. There's one shot where he's like skating on fire and all of these sparks and embers come off. It's an exciting moment. There were 6 to 10 shots in there. You're doing digital doubles for terrified passengers, smoke, and we had to build the ferry twice: intact and damaged."

Digital Domain got to recreate a pivotal piece of concept art. "There's a shot in the movie where you're wide as the ferry splits, Spider-Man is holding it shut, and the Statue of Liberty is behind him through a bunch of smoke plumes. I am told that's the piece of art that Tom Rothman at Sony saw and said, 'We're going to make this movie.' That shot is close to what the concept art looked like. There are big black plumes in the concept art, but we ended up with more different tones of smoke to give the shot more scale." Nothing ever happens easily. "There were the assets builds, environment builds, effects development, and simulations. Having a client that is so hellbent on having the end product the best thing that it can be makes all of these things tiny obstacles. We had power outages but overcame them because you know that the clients themselves are so dedicated to the project that you can't let them down. That spirit of trying to make everything better in the face of challenges was the most exciting part of working on Spider-Man: Homecoming."