Signs of the Times: Territory Studio talks about "Ghost in the Shell"

Territory Studio's Creative Director Andrew Popplestone and Head of 3D Peter Eszenyi discuss the philosophy and design behind "Ghost in the Shell"...

Territory Studio's Creative Director Andrew Popplestone and Head of 3D Peter Eszenyi discuss the philosophy and design behind "Ghost in the Shell"... 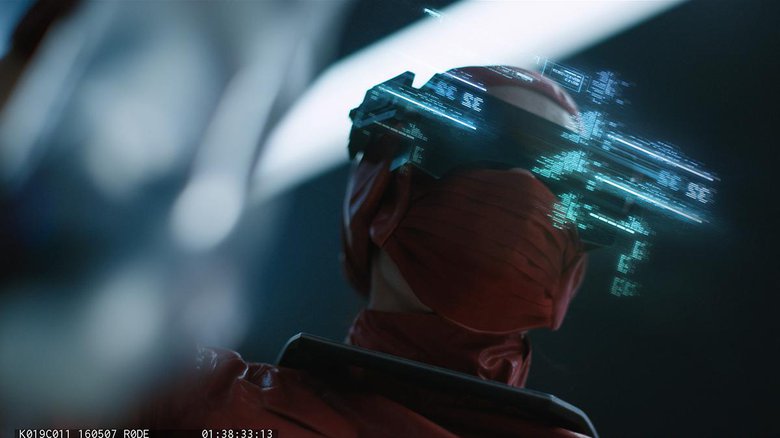 Producing holographic imagery is nothing new for Territory Studio but having to create 170 assets for Ghost in the Shell caused the boutique creative studio that specializes in motion, digital and graphic design to alter its pipeline and project management tools so to handle the volume of the work. Creative Director Andrew Popplestone and Head of 3D Peter Eszenyi provide insight into the creative and technical process required to make solograms, hologlobe, holo conference room, and street signage that fits into the cyberpunk future envisioned by filmmaker Rupert Sanders (Snow White and the Huntsman) in his live-action adaptation of the manga and anime classic. 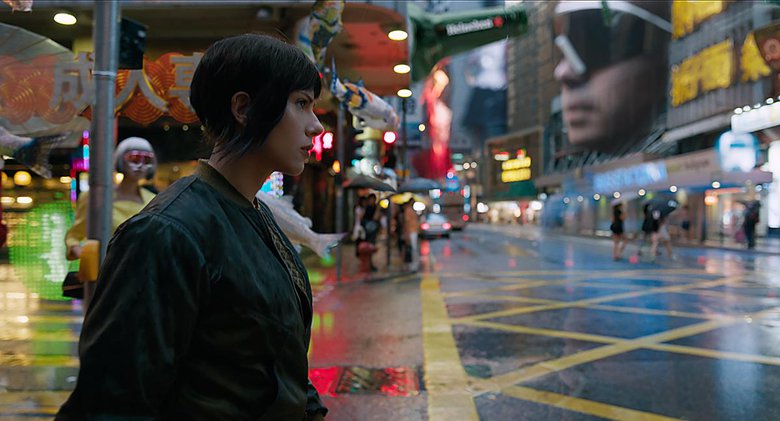 Tools for the future

"Ghost in the Shell was probably the biggest project that we've had to date,” states Territory Studio Creative Director Andrew Popplestone. "Most of our work in the past has been on-set graphics, and this was fully postproduction and visual effects.” Creatively there were no changes. "We are a design concept driven production studio so conceptually and design-wise we worked the same way. Nothing changed there. It was the pipeline process. Because we were working with MPC as well we had to work in tandem with their pipeline so we had to make some changes there.”

"The way I see it is the scale of the studio has worked to its advantage because we can fairly easily tailor the pipeline towards any other visual effects vendors that we work with,” observes Territory Studio Head of 3D Peter Eszenyi. "We traditionally use Cinema 4D as the basic element of our pipeline but because we were working with other visual vendors it was much easier for everybody to incorporate Maya into the mix. We ended up using Nuke, After Effects and Photoshop; the usual suspects. The main difference from what we did previously was to use Shotgun on this project. TD Matt Brealey created insane amounts of code that helped to gel these different software programs together.” 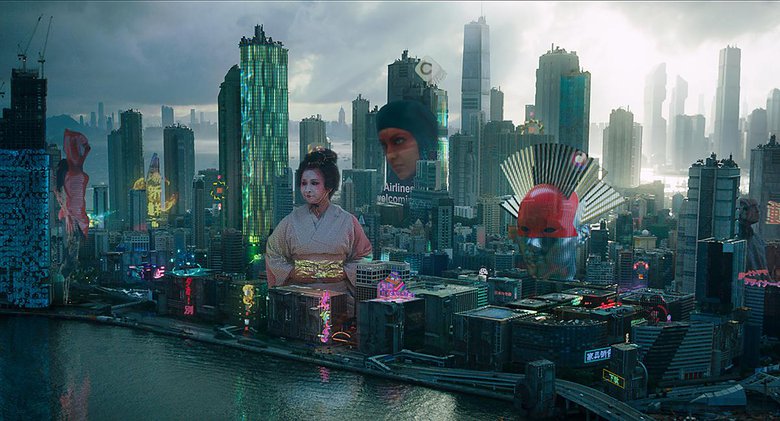 No flat screens exist in Ghost in the Shell as all of the computer graphics are viewed as 3D imagery. "Our main brief was to conceptualize technology and develop the holographic language within the film,” explains Andrew Popplestone. "The biggest portion of the 3D assets we needed to create were called solograms which are holograms that look real. The only way you would know that they're not real is for someone to walk through them. They're just made of light but look solid.” Territory Studio was responsible for producing 3D assets that worked in tandem with the ads that could be as big as skyscraper as well as advertisements and shop signs.

60 sologram adverts appear in Ghost in the Shell. "We had to come up with a whole bunch of brand names,” reveals Andrew Popplestone. "What's the reason? What's this thing we're selling? What is it doing? What is it communicating to the audience? How do we sell it? What's the tagline? Then create the whole asset based around that concept. We would sit down and brainstorm a bunch of ideas. The kinds of things we either want to sell or advertise or talk about or reference culturally or politically within the world. We would create concept sketches that were put in front of [Production VFX Supervisors] Guillaume Rocheron and John Dykstra to see how they landed and get those signed off. Then we would start to build them as full 3D assets.” 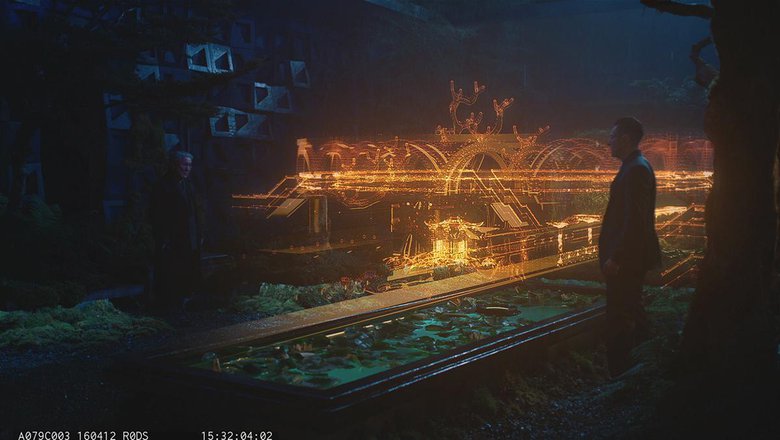 A range of visual research was conducted. "It's a unique universe that they're creating,” states Andrew Popplestone. "This juxtaposition of organic and technology. We looked at sculpture, jellyfish, sand, and all sorts of raw tangible elements that we could then base some of the technological ideas off of.” Pinterest boards were made and YouTube clips shared to make sure everyone in the studio had idea of what was being incorporated into the thought process. "When conceptualizing one of our ideas called digital sand, we asked ourselves, ‘How does this sand move? How physical is it? When shifting how fluid is it? What sorts of tangible attributes do we apply when creating the animation?'” 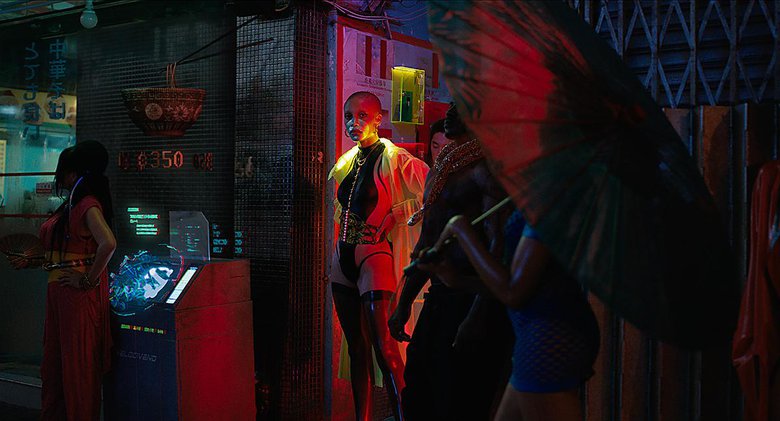 Intricate lighting was devised by cinematographer Jess Hall which involved a complex system of LED lights to emulate the colours found in the original anime. "We received some colour swatches from production which related to certain sets,” remarks Peter Eszenyi. "The on-set lighting and colours informed quite heavily what we were thinking about. Quite early on in the concept stage we had a mutual understanding of what sorts of colours the director wanted to use so we stuck to those established rules. We ventured away from those eventually in the case of the 3D assets we created because some of them were meant to be quite out there and over-the-top. Some parts of that futuristic city are quite seedy and some assets were meant to live in that world.”

Practical questions needed to be answered. "How and where were these solograms and holograms projected from was often a source of debate among us,” states Andrew Popplestone. "How do they sit within the environment? Are they lit by the environment? Do they light the environment themselves? There was a lot of back and forth within that. These things weren't just floating nowhere. They had to be part of the environment.” The construction of the 3D imagery required a different set of creative solutions. "We worked on quite a lot with Guillaume Rocheron and John Dykstra about coming up with a language that works with a 3D environment so we didn't rely on lines or dots or two dimensional traditional graphical elements,” notes Peter Eszenyi. "Everything was dimensionalized and had a volume.” 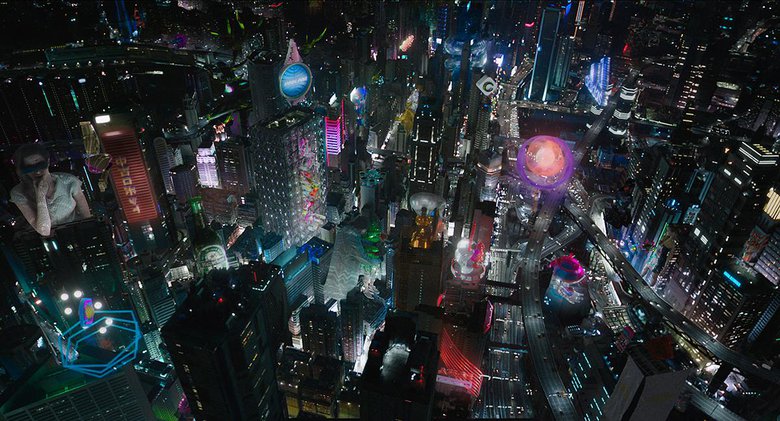 "What we do is part of a bigger picture which is the story,” explains Peter Eszenyi. "We always want to figure out what are the story beats that need to be hit. In the case of the medical lab we created a bunch of assets that could be used in any scenario and were bespoke to that certain scene. There's a sequence where some sort of voice analysing is going on and we had to create an animation that worked with that particular audio segment. In that case, it was making sure that we hit the right points in terms of the dialogue.” The holograms needed to interact with the gestures of the actors. "That's the type of thing we've been doing for years,” notes Andrew Popplestone. "The screen graphics are created working backwards from an actor's gestures and often to the narrative or a story beat.”

Even though MPC created the final version of the hologlobe, Territory Studio had a big role to play in the development of the technology. "It was probably last July or August when we had a couple of weeks to come up with ideas as to how the hologlobe could work,” states Peter Eszenyi. "We don't necessarily start the process designing the aesthetics or the visual representation of the hologlobe. We try to come up with some sensible idea of how this technology would work. We created three or four concepts and presented those to Guillaume and then we progressed with the digital concept. We iterated on it quite a lot.” Andrew Popplestone adds, "Fusing together a raw organic element with technology to create digital sand seemed to us to reflect the premise of the cybernetic background of the film. That's what Rupert and Guillaume loved.” 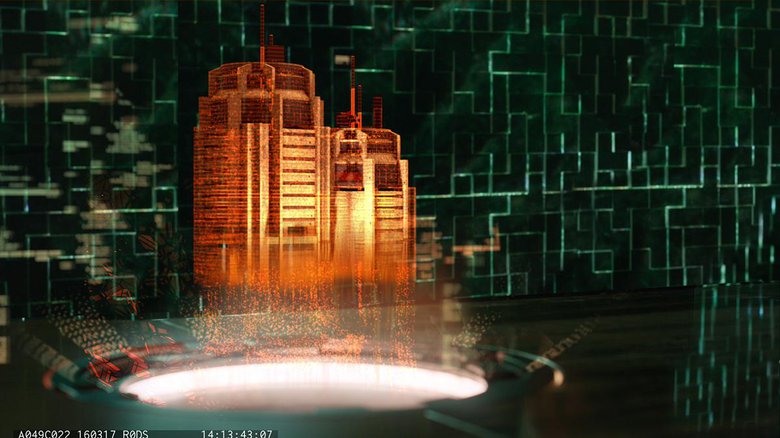 "As with the hologlobe we started thinking about what sorts of technology could be used and how the holo conference room works,” explains Peter Eszenyi. "Quite early on they established the volumetric grid that lives in that environment. Then we started to explore different ways of making sure that those holograms were visible, how they animate in and what sorts of graphical language lives around them. They wanted to show certain three dimensional elements from crime scenes, briefings and previous cases. We always had to keep that in mind that they wanted to use cyber scans or photogrammetry assets in these environments. It's a dark environment and looks quite different from the brightly lit cityscapes. That was part of the challenge. We always had to keep in mind that these different technologies come from the same source which is Hanka Robotics. The final asset was created by MPC but based on what we saw we weren't far off from the final look.”

"It was quite important that some of the elements from the original plate be kept so this new world within the Ghost in the Shell universe is not a complete erasure of previously existing things,” remarks Peter Eszenyi. "It's layered on top of those things and that was quite important to keep in mind when we were designing. Most of the civic stuff [such as directorial signage] that we did lives on top of things that already exist so it either augments those types of things or extends their functionality or adds another function.” There is also a quality issue. We quickly established that directorial and standard signage was much lower end,” explains Andrew Popplestone. "It's functional and that was it. Whereas the solograms were your high fashion brand where everything is perfect.” 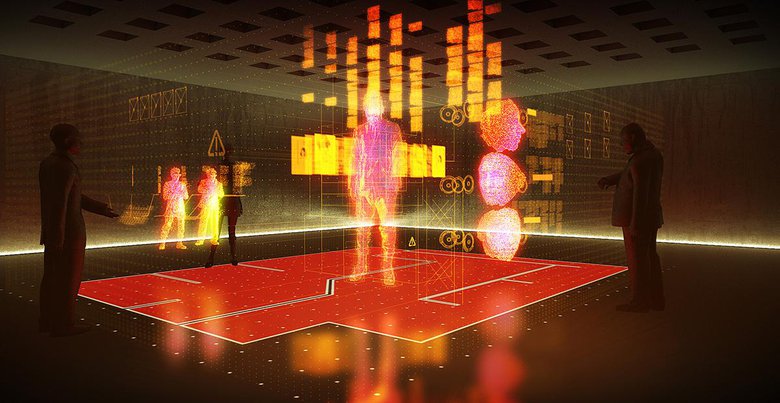 "The whole film is about, ‘Are we dealing with robots or humans?'” observes Peter Eszenyi. "That mixture of these quite different worlds influenced us in creating the hologlobe concept, for example, because as cyborg Major [Scarlett Johansson] could do everything within herself so she does not necessarily need a humanly readable form of data or a humanly readable method for searching through an insane amount of data. But if you show something that is more human or readable to the audience you convey that idea Major doesn't know herself if she is human or a robot. That is kept as a mystery.” The opening Ghost Cam sequence is proud moment for Andrew Popplestone. "You fly through the cityscape and environments; that's what I'm looking forward to seeing. Eszeyni agrees with his colleague. "Most of our assets live within that environment. I saw some shots where they're in broad daylight and others where they were like nighttime versions. I must say they seamlessly integrate into the Ghost in the Shell universe.”