This project pushed us fully into the visual effects territory, notes Territory Studio creative director/visual effects supervisor Peter Eszenyi. It was our biggest project to date for budget and scale, and we had to invest in a robust pipeline that could deliver to Dnegs specifications and requirements, and vast volume of throughput. We did this to make sure we are able to work with any other vendors if that was a requirement. While it was hard and intense work, it has been satisfying to know that we met the challenge and proved that our design led approach can contribute to the visual effects process. 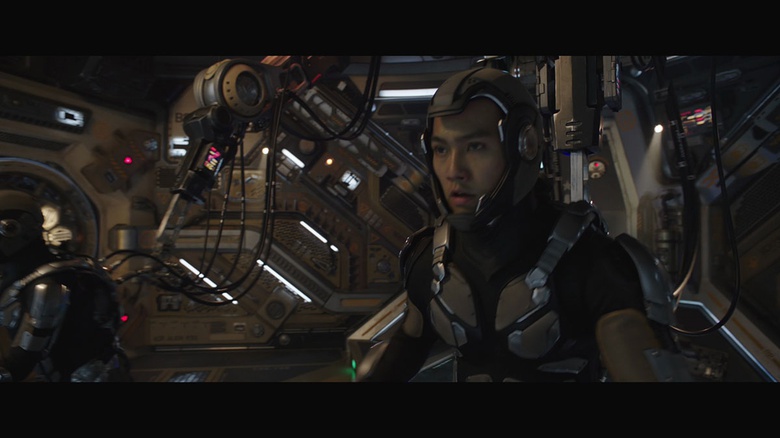 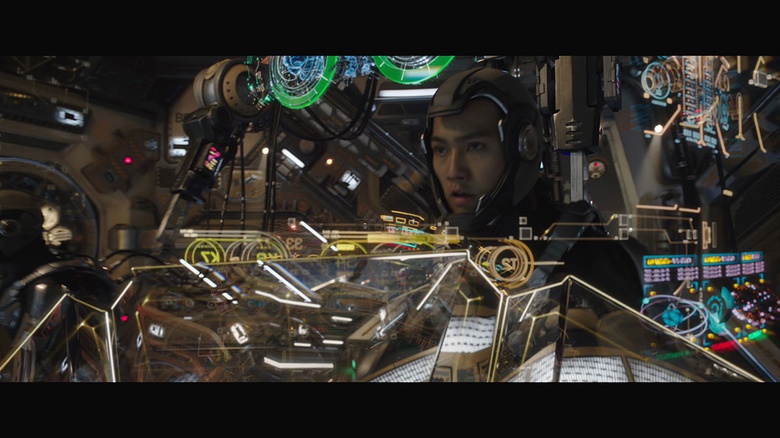 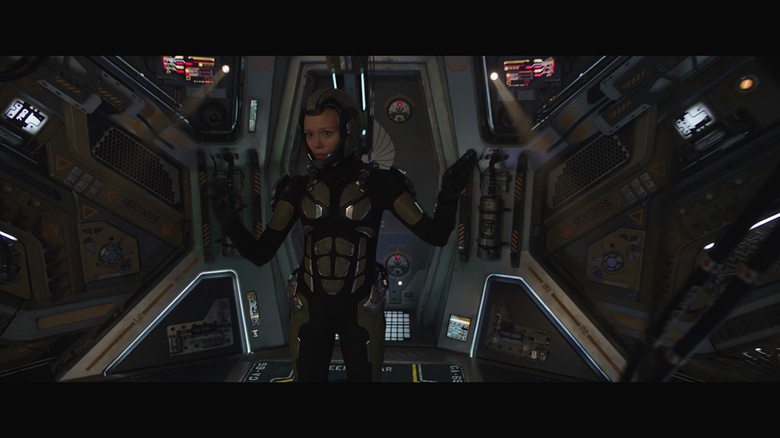 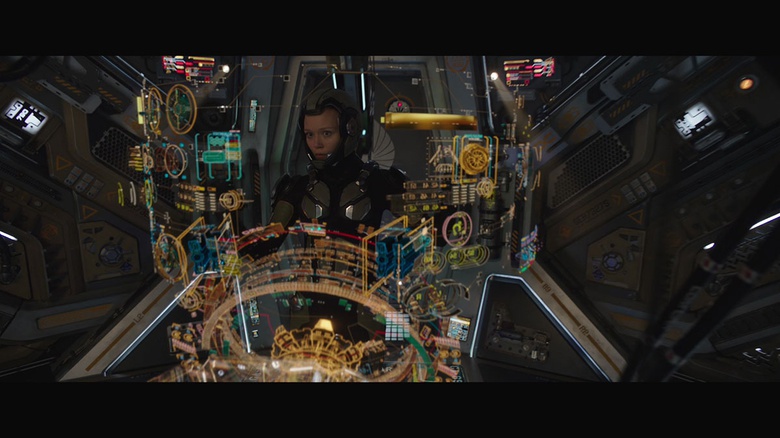 The entire project was handled by the London facility of Territory Studio. For the design concepts we had a lot of conversations with production visual effects supervisor Pete Chiang about the Jaeger controls and displays; he wanted more of a 3D approach with a layering of elements to achieve a volumetric quality. Pete Bebb [Dneg VFX supervisor] took us through the sequences and introduced us to the main narrative ideas and outlined the best approach to make sure we did not veer off track in the design phase.

Concept art and previz animation was provided by the production art department to explain the context of shots. We received some pre-vized shots within the Connpods, but they were generic, focusing on the narrative. Double Negative provided plates with the movements of the actors already baked in. Along with bodytracks and cameras, it was an interesting challenge to map our graphics to performance and environment. As the holograms were dynamic, always moving to suggest inherent intelligence that could pre-empt actions; this took a lot of imagination and attention to detail. We designed a system that could accommodate almost any move on behalf of the actors. 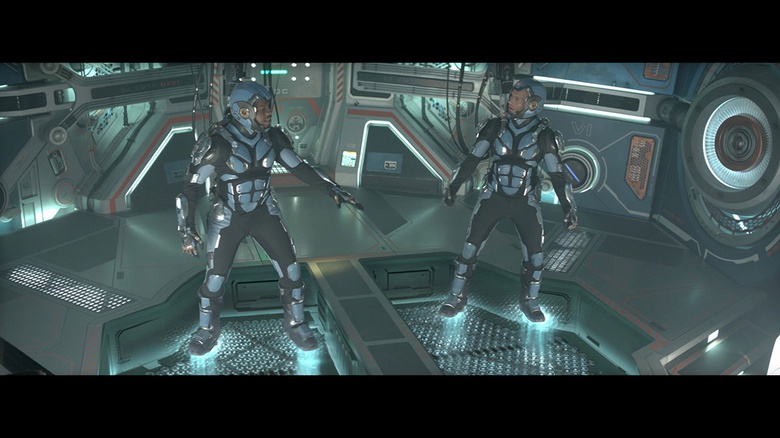 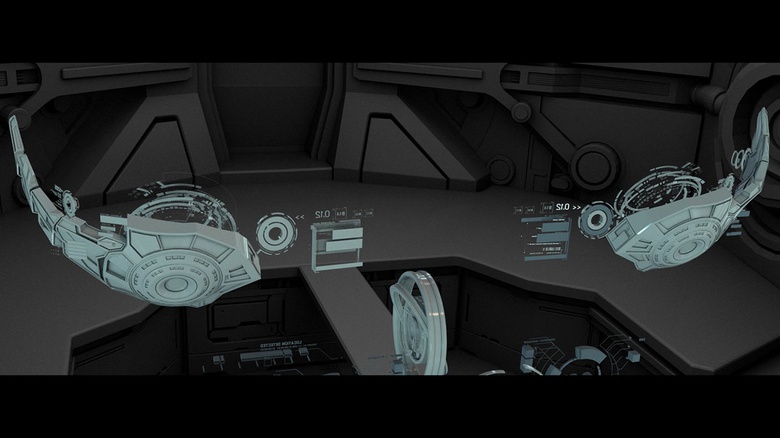 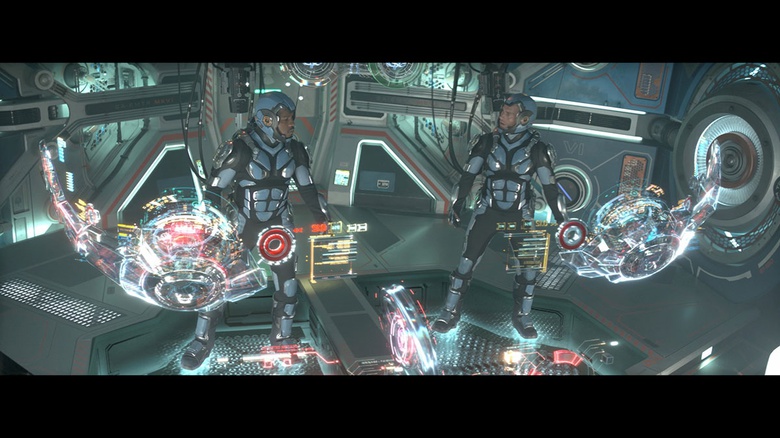 Concepts and layouts were created by utilizing Adobe CCS and C4D. We can iterate through ideas quickly and for shot creation used a mixture of DCC apps, Cinema 4D and Maya, remarks Eszenyi. Most of the renders were done with Arnold while Nuke was used for compositing. Ingest and export tools were custom built by our pipeline team to integrate with Shotgun. We brought on board Jason Halverson to supervise the comp side of things. Jason put a lot of effort into creating an efficient shot pipeline.

We delivered our shots as a package of EXRs, Nuke comps/scripts, so that Dneg could composite them into the main shot comp on their side. We had to adapt our pipeline and build new tools integrating Cinema 4D and Shotgun to allow us to export the finished files in strict adherence to Dneg naming conventions, and so that they could assemble final comps with our nuke scripts and rendered output files. 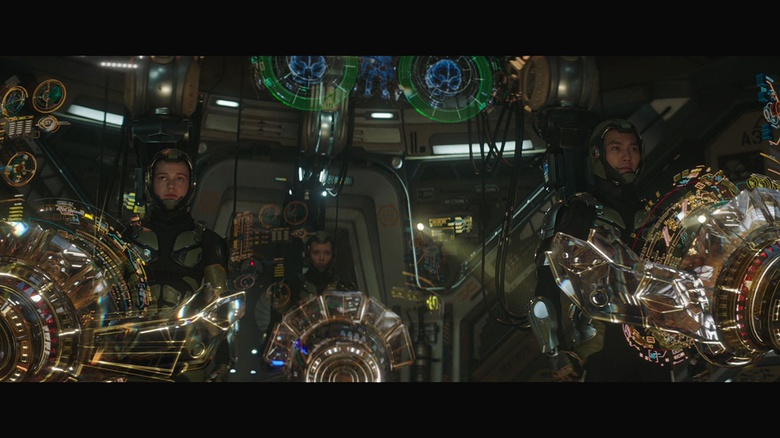 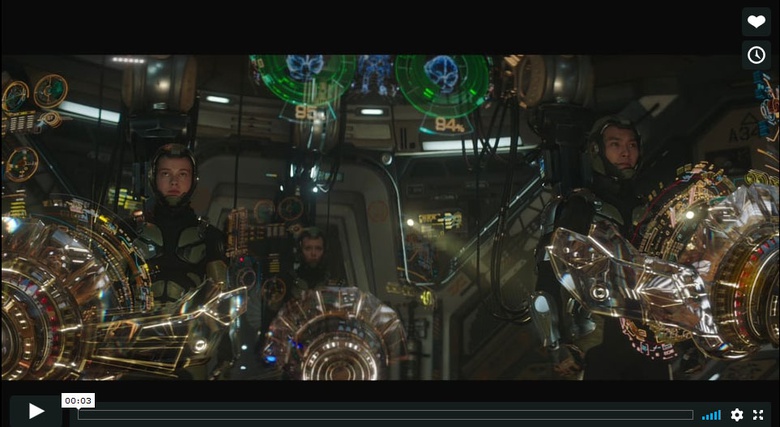 We had extensive conversations with Peter Chaing who wanted the holographic consoles to be sharp, sophisticated and dynamic interfaces to support the advanced technology of the evolved Jaegers, states Eszenyi. The complexity of the consoles as dynamic systems, always moving, led to some interesting discussions. Add to that the need to communicate key story points with a layer of visual drama and distinction to the Jaeger/pilot interaction, and we had our work cut out. We began by considering the dynamics of an intelligent system that could scale up and down as the pilot required.

We explored a number of routes. Once the visual mechanism of a cylindrical core to the console was established, we were able to work effectively to expand that into different display panels for each Jaeger. We also considered each console and display panel in ergonomic terms to establish rules about distance in relation to the pilot, his movements and interactions, and its environment. Rules were incredibly important. We defined and applied rules to how the modular consoles could scale up and down, shrink and expand, to get out of the pilots way during different its battle state for example, or display relevant systems to assess damage.

Add to that a distinct visual language and UI for each Jaeger, whose holographic control surfaces and displays provide the pilot with navigation controls, information, data streams, and feedback systems, continues Eszenyi. This brings in our narrative and design expertise from working on-set to support story, action and performance, which helped us to design and problem solve to achieve robust visual solutions that were in sync with each actors performance, their interaction, task and environment. 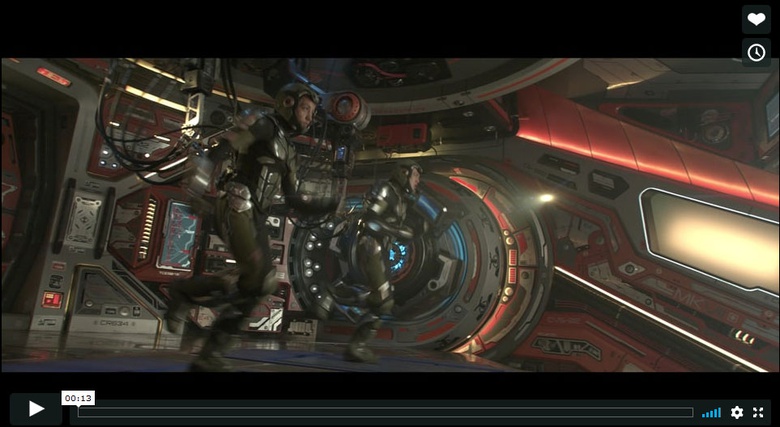 Communicating story beats in a moment was also quite challenging on this project at times because of the quick pace and complexity of how the Jaeger models, actors and action had to integrate with the holographic elements and displays. But again, we're used to working quickly and efficiently for onset delivery, where a director can ask for a change to be ready for the next take, so we applied the same approach this time working within the context of visual effects.

Relevant graphic screen information had to be produced along with appropriate motion, video noise, transparency and color pallets. We had a lot of conversations with the Dneg team to determine the best materials, and shaders for the interfaces, reveals Eszenyi. The consoles needed to look almost transparent from one aspect and almost solid from another. As for color palette it was clear that we needed to create different brands or personalities for each Jaeger. We had Bracer Phoenix (oldest), Guardian Bravo (Mark VI), Gypsy Avenger (Mark VI) and Saber Athena (Mark VII) to create different consoles for, so we drew on color palettes that reflected their exterior armor.

Along with the UI this helped to suggest evolution from one model to another and reflect their different levels of technological sophistication and also helped the audience to differentiate between them. Together with supporting narrative story beats, there were a lot of layers to the complexity of each shot and sequence, that involved shot by shot treatment, and it was an iterative process to get something that both teams felt were right for each one. 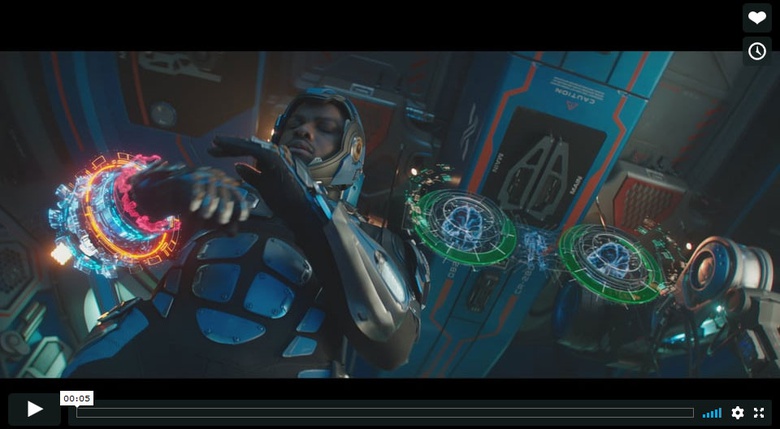 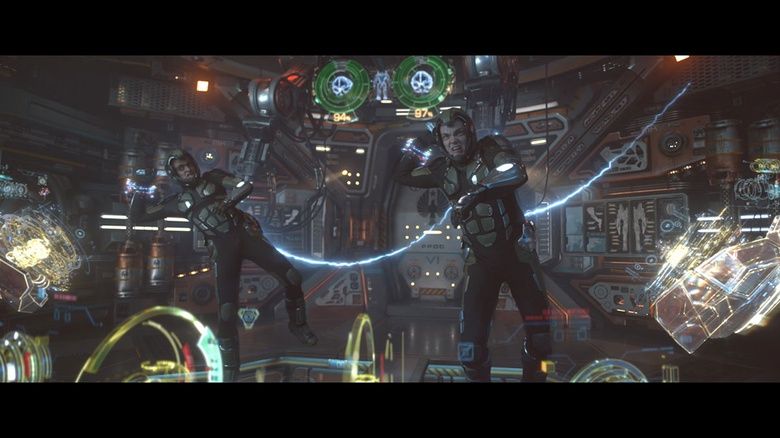 We were responsible for concepting, design, animation, texturing, lighting, and shot delivery of the complex holographic control surfaces and display systems for each of the four Jaegers, explains Eszenyi. For lighting and reflection, we referenced the HDRI spheres from the set, using those as the base, and had quite a few little lights floating around doing shot specific little accents. We then rendered out a full reflection pass that was layered into the comp; it could be tweaked in post to make sure the amount of reflection was the right one for the shot. Assets were shared with Double Negative. Visual effects isa collaborative process and it is expected to be flexible with the assets; you always have to keep in mind that at any point there will be a request to share them.

One of the Sidney shots was picked as a look development shot early on, and that was a long one, with a camera move that goes almost completely around the set, reveals Eszenyi. We did quite a few versions of that shot, establishing how the animation, light, the form language comes together to create something cohesive. It took a lot of experimentation and iteration to find the best solution but once that was established, it set a sort of a template for the rest that informed our approach. The final battle is intense and a favourite of Eszenyi. It was great to work with Peter Chiang and the helpful Dneg crew. The incredible team at Territory did an excellent job on this huge show. It was intense but I remember the excitement of the guys standing around a computer waiting for the first trailer to be online! Seeing the film, I felt proud that our work came together so well.