3dtotal chat to Paul Charisse and Alex Counsell about their work with University of Portsmouth students in creating a full length feature film: Stina & the Wolf

3dtotal chat to Paul Charisse and Alex Counsell about their work with University of Portsmouth students in creating a full length feature film: Stina & the Wolf

3dtotal: First, thanks for taking part in an interview with 3dtotal! Youve been working on a fantastic animated feature film called Stina & the Wolf. Could you tell us a little bit about the project?

Paul Charisse and Alex Counsell: We are making a feature length CGI movie in collaboration with staff, students and alumni at the University of Portsmouth. It offers the students a great learning experience and also allows us to make the kind of challenging, imaginative and original movie that is hard to fund in todays risk adverse movie making climate.

The project utilizes the latest production techniques to emulate the current industry workflows and pipelines. These range from established film making techniques, such as extensive production design and storyboarding, through to the latest techniques in pre-viz, performance capture and animation.

In combination with this, we are using state of the art VFX, rendering and compositing techniques to ensure that the quality is kept at a level that gives the students a realistic experience of the industry they plan to join, as well as making our film look fantastic of course! 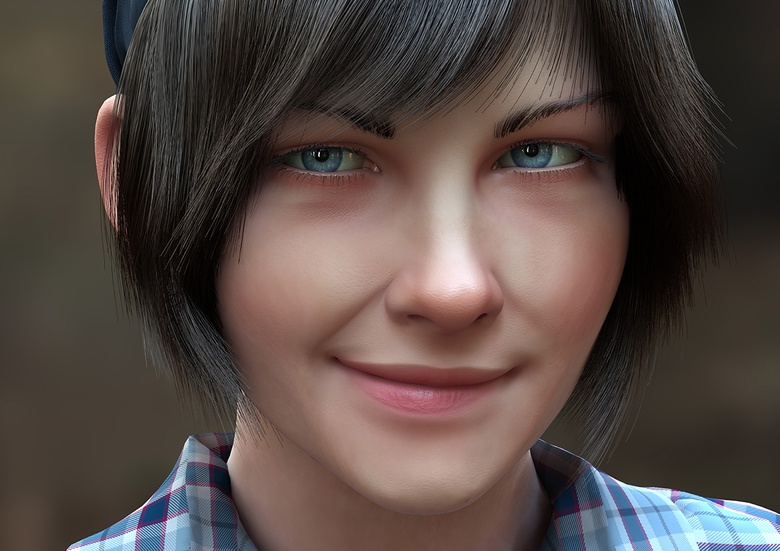 Stina is happy and thoughtful. But who or what is she smiling about?

Stina is lost in the snow. Where will the story take her now shes on her own?

The Pipe Catcher is in the forest hunting. But what has he caught today?

3dt: From the trailers on Kickstarter and the feature film site, we can see that its a fascinating story with great artwork; how did the idea for the production come about? And what, or who, were the inspirations for the story and artwork?

P&A;: The film was originally adapted from a 35 minute piece of narrative classical music that told a magical realist fable set in a mythical world of mountains and wolves. Originally it was going to be a short film, but we had so many ideas we thought a full length feature would do it more justice and allow the story more room to breathe. It also allowed us to really develop the themes of the story into something far more interesting.

From a narrative point of view, David Lynch has been a massive influence and the film draws on a few other classic films for cinematographic and production design influences: Nicholas Roegs Dont Look Now, Neil Jordans The Company of Wolves; Peter Weirs Picnic at Hanging Rock and Charles Laughtons classic 1955 magical realist film Night of the Hunter (which has also been a big influence on the music).

Although all these influences come through in the look and feel weve established in our production art and trailer (and our new short film sequence coming out later this summer) , we think the resulting mix has given us something quite special and definitely unique. 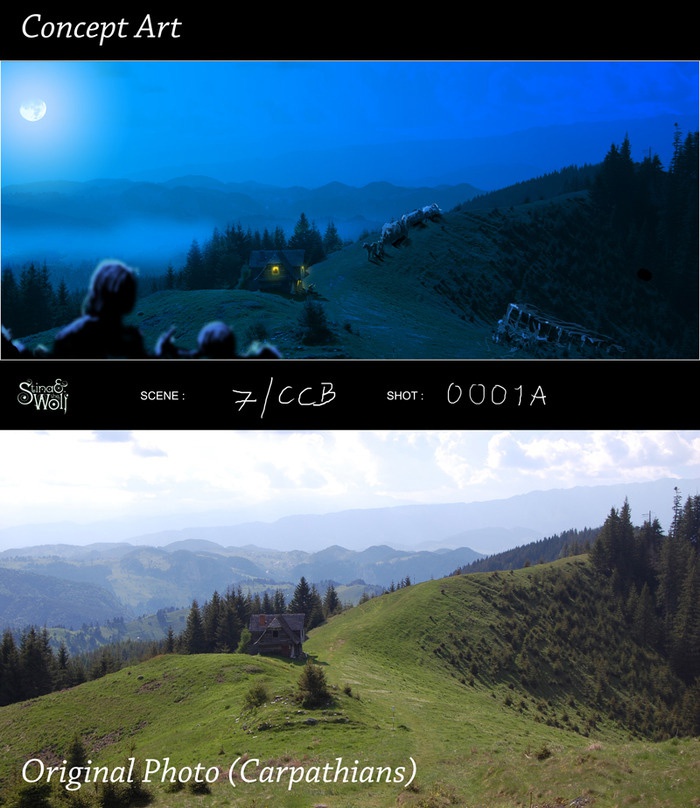 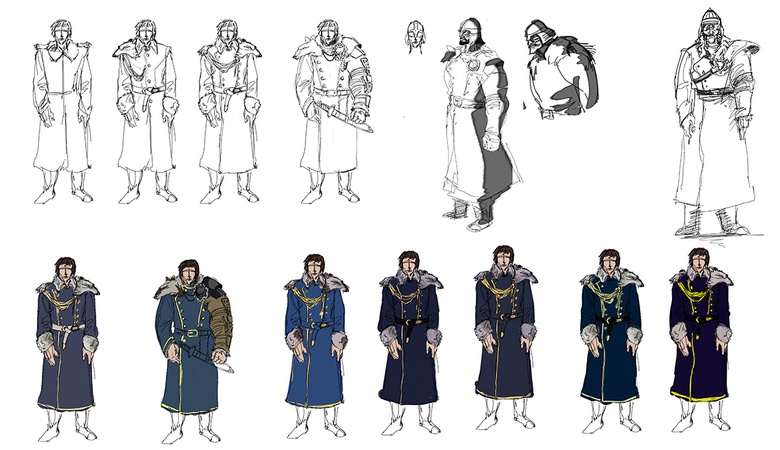 3dt: The film will be produced by university and secondary school students, how will this impact on the final film, or what will it bring to the perspective of the production?

P&A;: Part of the point of our project working in an educational environment is to give the students a realistic experience of full feature production.

As Im from that world Ive tried to keep things as close in terms of production pipeline and quality level as possible. This has meant that only the best student work is used, as it has to hit an industry level of quality to make it in to the movie. This means only the best students really get to show their work on the project, but I think this really pushes them to produce work of an extremely high quality. Which will obviously get them great jobs when they finally graduate (we hope!).

Stina surveys the gathering clouds as they start to form into a storm. (from our up and coming short film)

3dt: What will the students take away from the experience too? How would this experience be different from creating the usual final short as part of their course?

P&A;: Working in an environment where their work cannot be submitted until it has hit professional criteria is unusual for education and I think this pushes the work to a standard than can sometimes be harder to achieve with peer only projects.

Not to say individual student work cant be amazing, because it can and weve recently had students win the Bournemouth Animation festival prize for a group project they did on their own in a group of 4.

Also, working in a structure like the one we have set up with our in-house VFX facility FOAM Digital allows the student to learn from each other in the specific way you can only really experience in a high-end work environment; where a project is managed and delivered like a real product. It also allows them to test out the skills they learn in structured lessons on a project thats already in full swing. 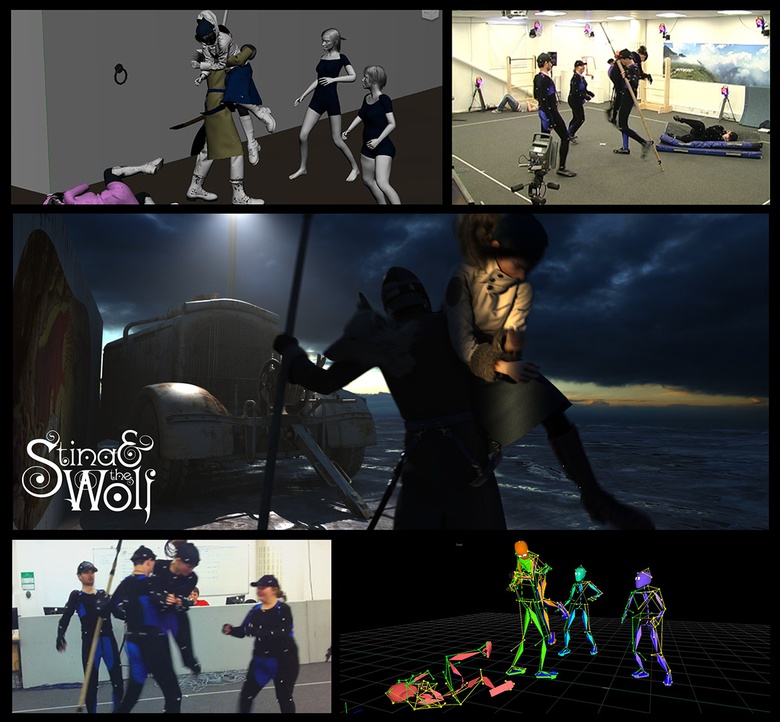 3dt: Your Kickstarter page shows all the work that will go into previz for the film; and its clearly a huge process! Can you give us a bit of an overview of the workflow for the previz part of production and where youre at, at the moment?

P&A;: Our previz is basically a 3D animated version of the storyboard. It allows us to position all of our cameras and blocked-out sets with the motion captured performances we did during our principle shoot, and edit the resulting shots together in a traditional way to make a rough cut of the whole film.

It also gives us a chance to plan out and budget every single shot, for the much more expensive and time-consuming stage of production: the high-detail animating, modelling, rendering and compositing of the ambitious environments and characters (An example of this final stage can be seen in our teaser trailer). As we motion captured the film a few years ago we are in the frustrating position of having all of the film rushes as data, but are not able to start blocking it all out until we begin the previz stage. 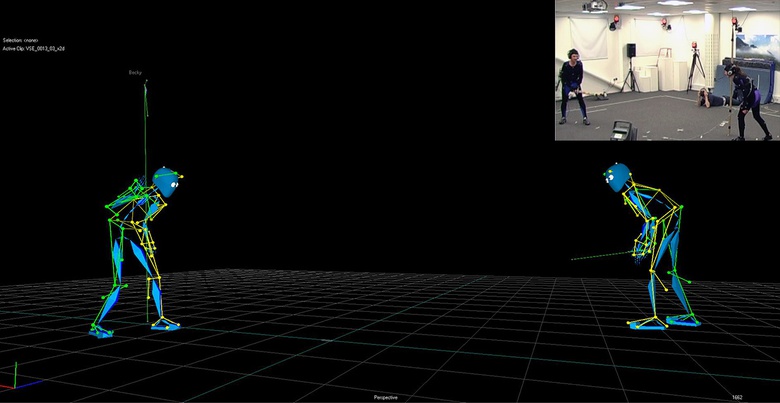 Some of the motion capture elements in the scene

3dt: What software would you say is crucial to the workflow? Are there any areas where youve had to adapt the software or process to get a certain effect?

P&A;: Our principle piece of 3D software is Autodesk Softimage. We have used it to model, rig and animate our characters. We have also been making extensive use the excellent ICE visual programming system that exists in Softimage to help us create procedural systems that range from automatically adding wetness to clothes in water, to creating huge fields of swaying grass that collide with our characters.

We are also planning to use the excellent Fabric Engine over the next year, as it's similar to ICE and will allow us to incorporate our character rigs and other VFX systems across to other software platforms. (The recent demise of Softimage has forced us to try and port our pipeline and assets to new packages; we are hoping Fabric Engine will make this transition easier!)

To render our film we have been using the amazing Arnold Renderer by Solid Angle. This works within Softimage and has been used to bring films such as Gravity and Elysium to the big screen and is perfect for the hyper-real look we are going for, as it allows us to use traditional cinematographic set ups (like bounce boards and adding studio lights to complement realist HDRI environments) For our body motion capture we have been using Blade to process all the data that we capture on our Vicon motion capture stage.

For Facial capture and animation, we use the excellent Faceware which lets us transfer the video footage of our actors onto their CG avatars.

For compositing we are using NUKE and for additional VFX such as water (as seen in the trailer), we have been using RealFlow.

For texture work, we have been using Photoshop and Mudbox.

And for render farm management, we use PipelineFXs Qube! 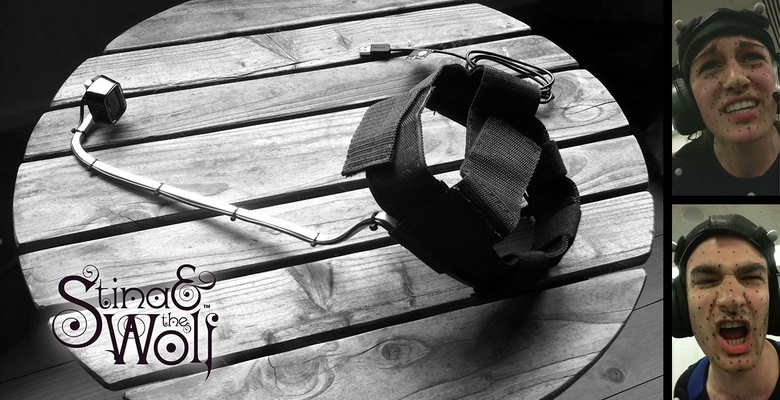 One of 4 face cameras built by the director in his shed from neck strengthening harnesses, aluminium tubing and web cameras 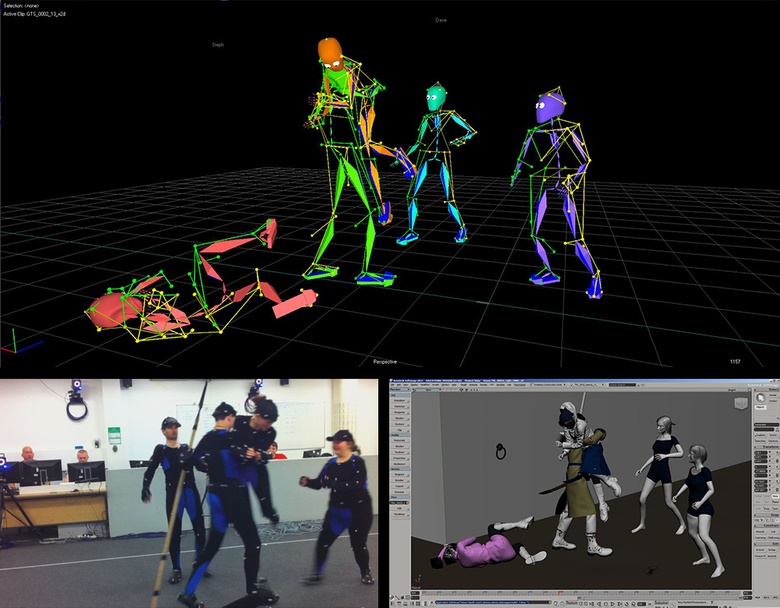 3dt: Have there been any particularly tough hurdles to overcome, if so, how did you get through them? Also, do you anticipate any difficult processes to come?

P&A;: Our biggest problems so far have inevitably been funding related. The university and sponsors have been very generous and we have come a very long way already having completed our principle shoot, a lot of the music, most of our storyboards and production design but we need to raise more money due to the volume of shots involved in feature length work.

A lot of times our Heath Robinson approach has been our saviour; for example making all of our head cameras for the shoot out of neck strengthening harness bought on the internet, bits of aluminium tubing and webcams. We are trying Kickstarter as our first serious attempt to raise funding outside the university. Its very new to us and we are closely monitoring our fortunes to see what we can learn for future attempts, as we will inevitably need to raise money quite a few times to complete the film!

3dt: And have there been any shining moments or experiences that students have really enjoyed and taken to during production so far?

P&A;: We have been doing some podcasts recently (available from our Stina Facebook page). And its been great to hear the students talk about work they have produced from their own perspective, as well as ridiculing me whenever they get an opportunity, obviously (I think that may be part of the fun!).

Its fantastic to hear the pride and excitement they have in seeing their first shot up on the big screen, or getting to put a particularly challenging piece of work on their reel. A lot of lasting friendships have also been forged in the heat of our Stina crunch time we have every year, where we try and get a short piece of finished quality work out. 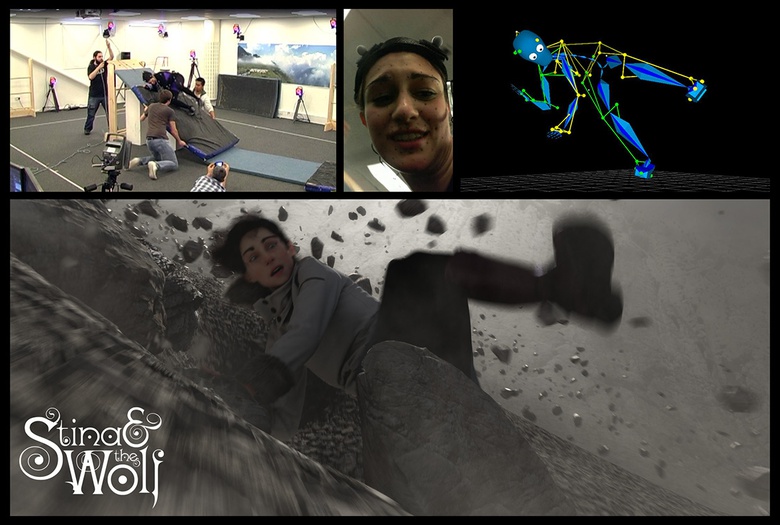 3dt: Finally, what comes after the previz for the student team? Are there any other areas of the CG industry, such as advertising and printed publications, that will come as part of the Stina and the Wolf project?

P&A;: We are open to all avenues at the moment. Only this week actually we have been thinking about developing a Stina & the Wolf graphic novel, as we have so much fantastic storyboard art from our recent graduate Chavdar Yordinov. It would be a shame not to use it! It would also allow people to experience our story and visual style in another medium first, which could really help promote the film. 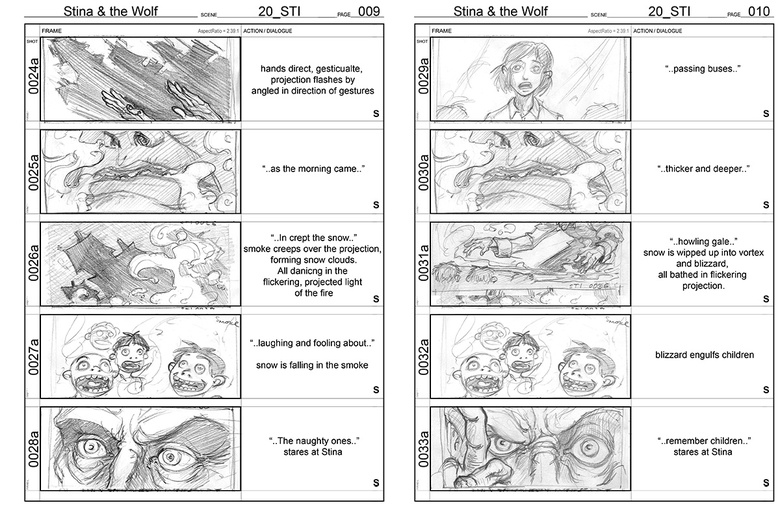 We are also planning to set up a full time studio that works in collaboration with the university over the next few years and will consider taking on other commercial projects to make this a viable venture. This could ideally help continue funding the film production. This is a little further down the line though and we are in talks with the university at the moment to see how this could work, but its exciting times ahead (even if they do progress very slowly!)

At present we are finishing off our Stina Short film entitled: /Uncle Griot/; we are very excited about it and we think it represents the first real example of how the finished film will feel.

3dt: Finally, thank you very much for taking time out of your busy schedule to take part in our interview, and very best of luck with the project!