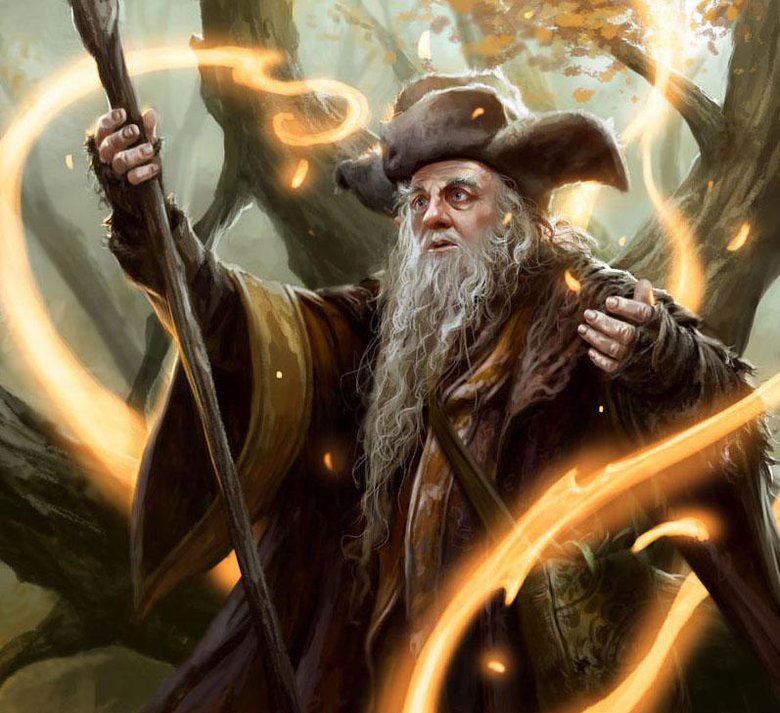 Mike 'Daarken' Lim already had a large and dedicated fan base when he started work on his book Elysium - The Art of Daarken with us here at 3DTotal. Since, its release in October 2012 the book has been a huge success and received nothing but praise and 5* reviews, increasing his fan base even further. We're catching up with Daarken to see what he has been up to since the release of the book and, of course, to find out what exciting projects he has coming up!

Hi Daarken! It's so good to catch up with you, especially since Elysium - The Art of Daarken has done so well across the globe. You must be pleased; did you expect to receive such a great response to your work?

Hi! Thanks for having me on here, I really appreciate it.

I am very pleased, and very surprised. I actually never anticipated the ratings to be so high. There were many times during the production of my book when I actually stopped and wondered if I should just cancel the project. I'm usually never happy with my work and I wasn't allowed to publish a huge part of my career either due to contractual agreements or some other legal issues. Those two things planted a seed of doubt in my mind as to whether or not the book would be a success.

I ended up sitting on Amazon hitting refresh every few minutes. If my book had bombed, I would probably be hiding in the corner of the room right now.

Art books can be notoriously hard to sell as they focus on an individual or group's work as opposed to various styles that may appeal to a reader. Have you been surprised by the number of new fans that you've now acquired?

Hah, well I don't know how many new fans I've acquired from my book. I would think new fans would account for only a small portion of the sales. I have received a few comments or messages from people who didn't know my art before, but I don't think I've seen a huge increase in the number of fans. 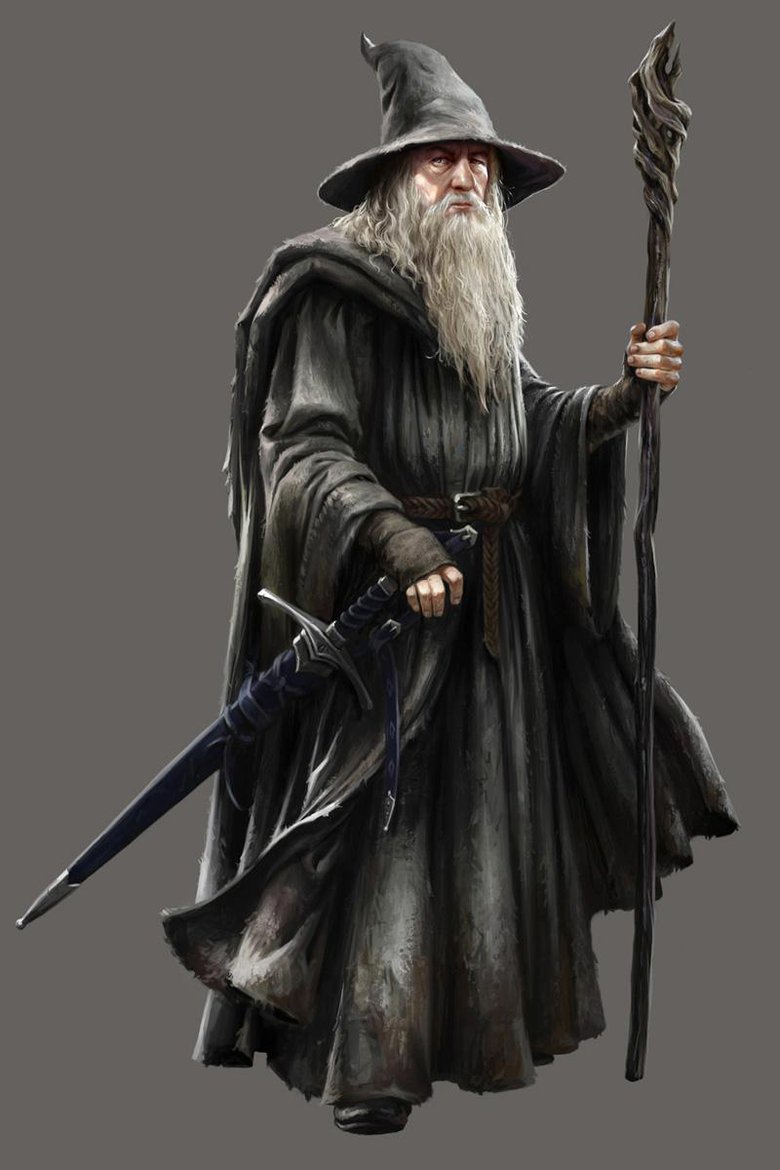 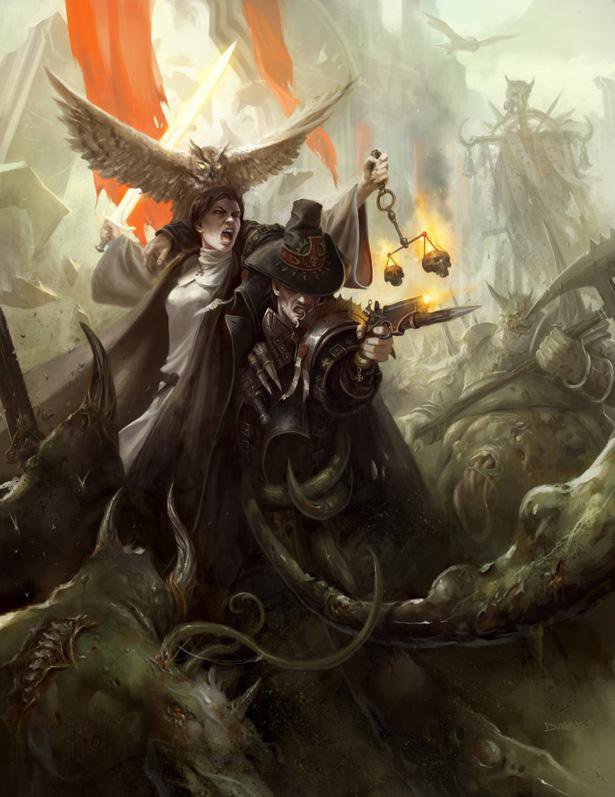 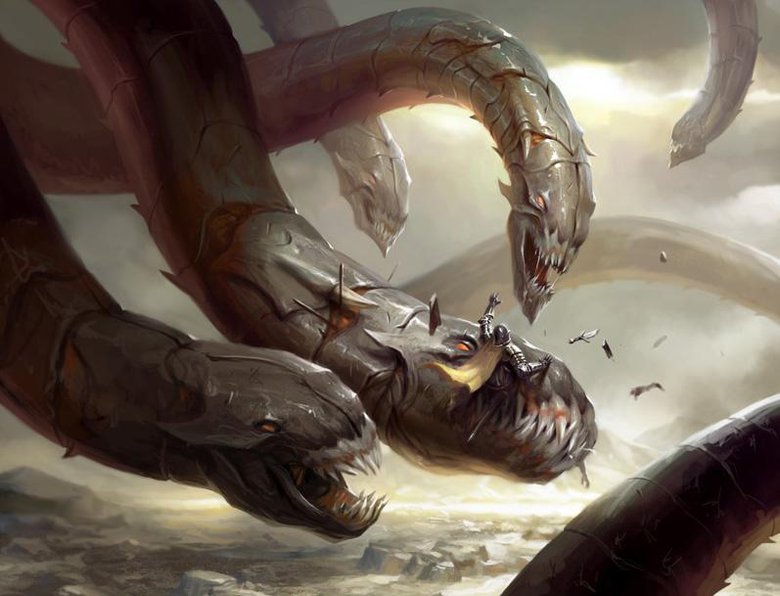 I think my book is also harder to sell, not just because it focuses on a single artist, but because my art isn't your typical art that sells well to the mass market. I don't really create art that you would hang on your wall, unless you like looking at evil creatures all day long.

It reminds me of my friend's mom who keeps telling me to let her know if I ever paint something "nice" so she can hang it on her wall (Laughs).

If people are reading this that haven't got your book and are maybe new to your work, how would you describe your style to them?

I've never considered myself to have a recognizable style, even though others say they can easily identify my work. I guess if I had to describe it I would tell them my art is dark and gritty fantasy with a twist of realism. I always try to inject some realism into my paintings, even if I am depicting something fantastical.

With many accomplished artists, it becomes quite easy to pick their work out once they have mastered their style. Do you think this limits the creativity of an artist in the future, when they maybe want to explore other styles of art?

I guess sometimes it can become a detriment. I have seen some artists who have such a unique and specific style that their work ends up looking the same. I've heard stories about some artists who got in trouble with clients because their work looked too similar to work they produced for other clients.


Some artists will find a style or subject matter that is very marketable, so they end up doing that over and over because it sells. Getting stuck in that rut can definitely stifle a person's creativity.

As for an artist trying to change their style, it can be hard. Usually artists are hired because of their style, so if a client hires you and you give them something that is totally out of left field, they probably won't be very happy. I think if you want to change your style, you have to do it with personal work and then try to reinvent your portfolio to reflect your new style. 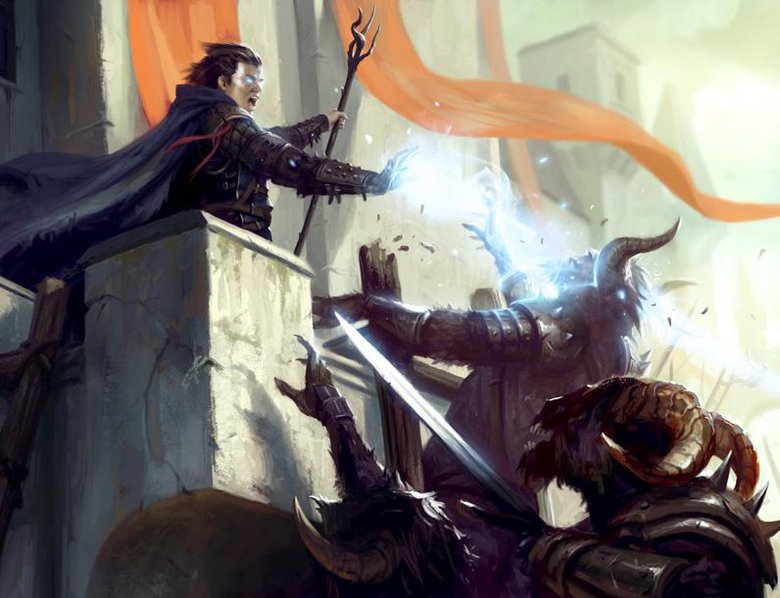 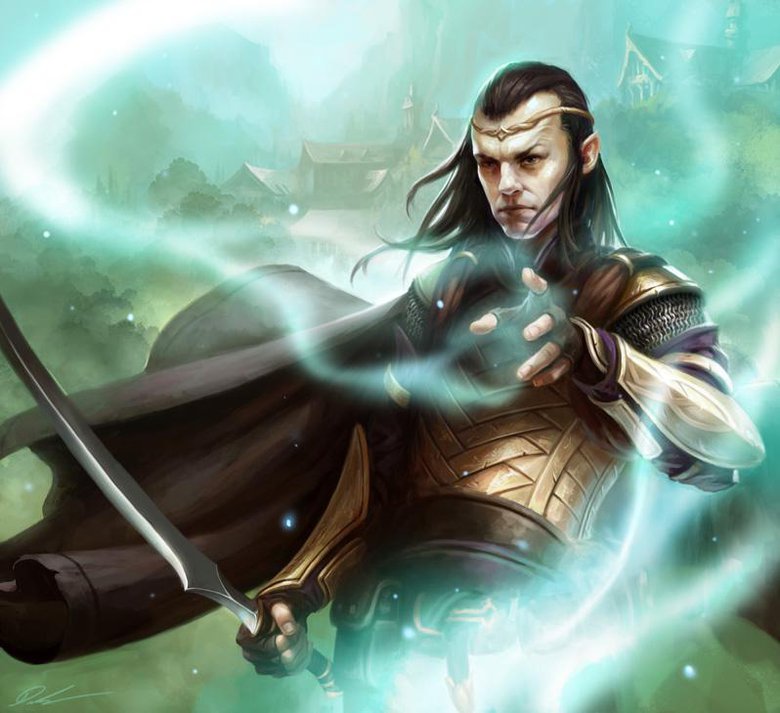 Many artists have a particular routine or process that gets them 'into the zone'. How do you approach your work and avoid the dreaded 'creative block'?

This always seems like such a lame answer, but as a professional artist you don't have time to deal with artist's block. You can't sit around and wait for inspiration to strike. You have a deadline that you are being paid to hit, so you have to do it. It doesn't matter if you are in the mood to paint or not, you have to get your work done. Period.

It is a little easier as a freelance artist. Staff artists are required to be creative and on the top of their game every single day from 9 to 5. As a freelancer, if I really don't feel like painting one day, I might be able to take the day off or wait until later on in the day to start. Although that typically means I have to cram in more hours somewhere down the road.

I guess if I'm really not feeling in the zone, I'll work outside of the house. Sometimes changing your surroundings can help you focus, especially since you won't have the typical household distractions, like video games.

You have worked on a whole host of amazing projects throughout your career, including Guardians of Middle-earth and The Hobbit games with Kabam and Warner Brothers, just to name a few! Can you tell us what you're working on at the moment and what you have planned for the future?

Well, unfortunately I can't talk about some of the projects I'm working on. Besides those, I'm still consistently working on Magic: The Gathering. I have also been working on several Japanese mobile games, like Reign of Dragons and Legend of the Cryptids.

Earlier this year I spent three weeks in Renton, WA working at WotC to help conceptualize one of the Magic: The Gathering sets that will come out next year. I was there along with Wayne Reynolds, Chase Stone, Sam Burley, and Tyler Jacobson.

Next weekend I'll be in Temecula, CA for the Dragon's Maze pre-release and I'll also be at the Portland Grand Prix in May and at the Las Vegas Grand Prix in June. I'm still hoping to go to a Grand Prix in the UK! 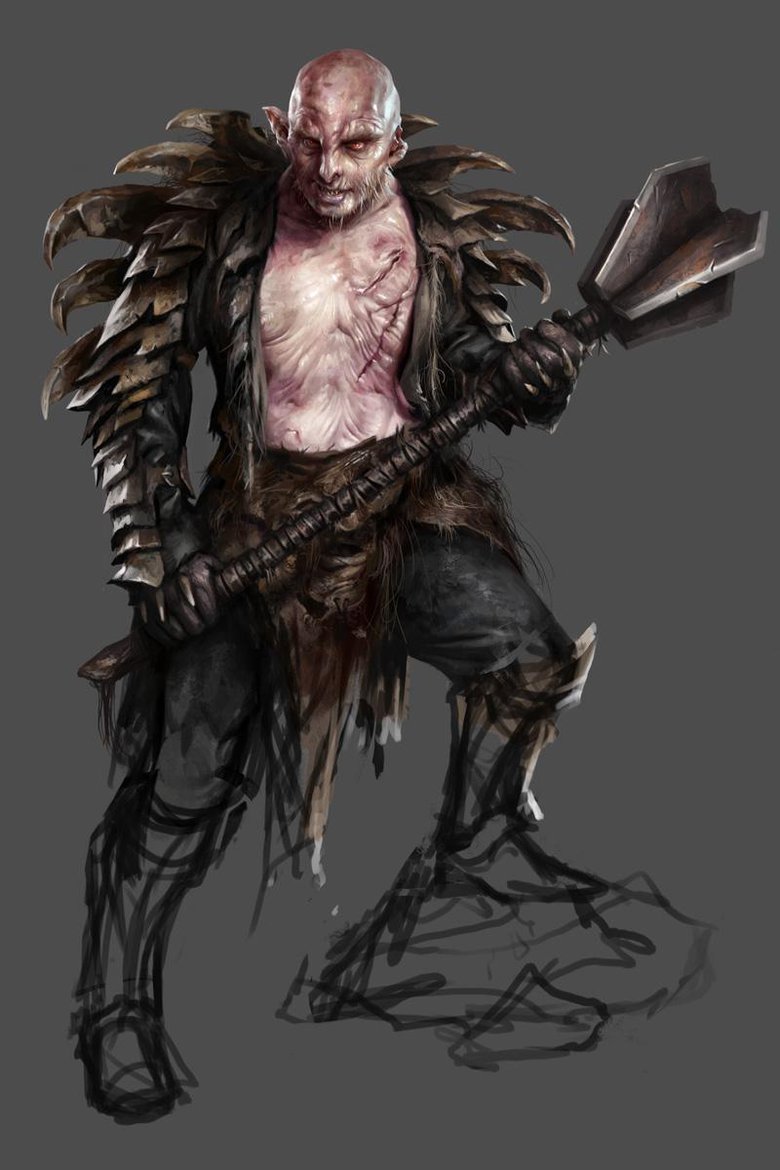 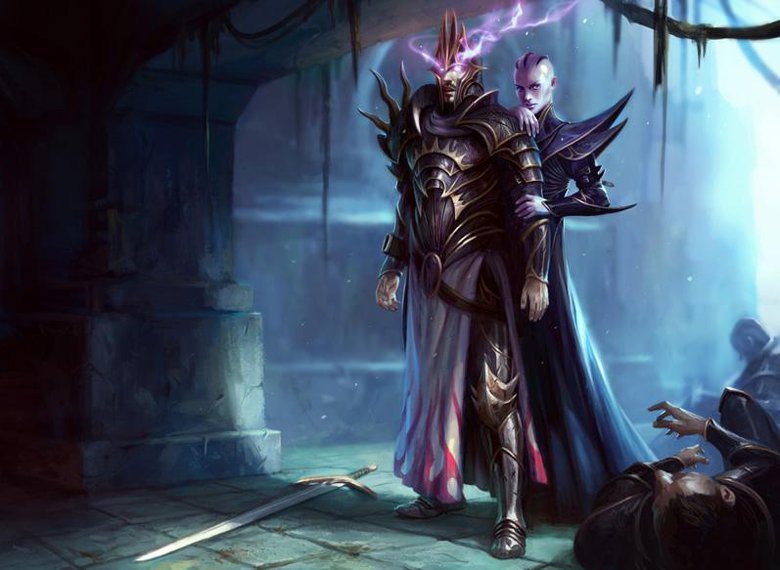 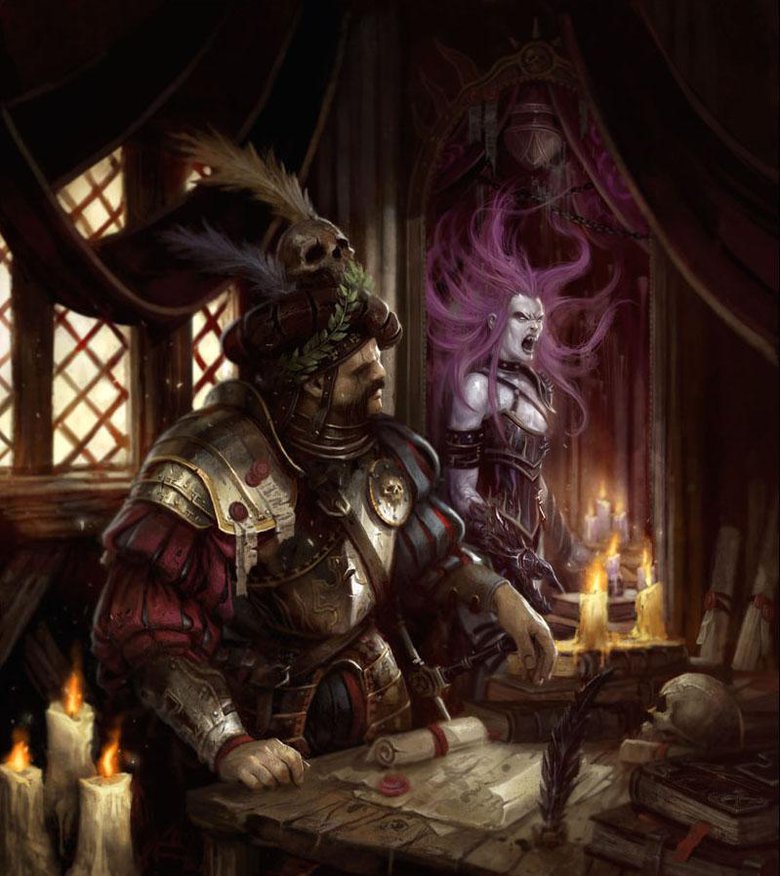 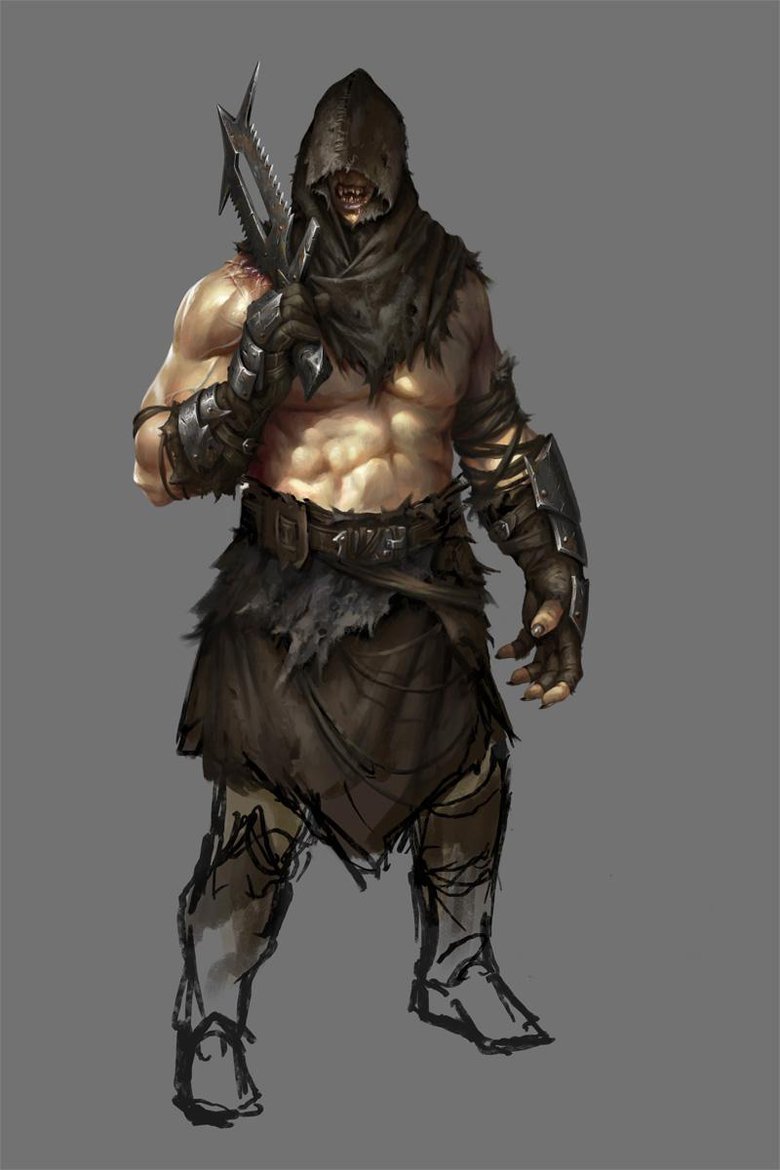 Other than that, I don't think I have any special plans for the future.

Finally, if you go back to when you first began your career and give yourself three pieces of advice, what would they be?

Hire an accountant, take more breaks, and have more patience.

Not only will an accountant save you a lot of time and stress, but they will also save you money.

I hardly ever took breaks earlier in my career, and working 80-120 hours/week didn't help either. I ended up developing carpal tunnel syndrome in both wrists and cubital tunnel syndrome in my left arm by my mid-twenties. It is a real problem with digital artists these days, so be sure to take care of yourself.

I wish I had more patience back when I was in school and during the first several years of my career. I didn't spend as much time on my paintings as I should have. I tended to spend a few hours on a painting and then say "I'm done!" Cue video game playing.

When art directors would ask me to spend more time on a painting, I always thought "but I'm done, I don't know what else to do with it." Which is actually funny because looking back at my old art, it was so loose and sloppy. I was lazy.

You can keep up to date with Daarken and his work by visiting the following link: 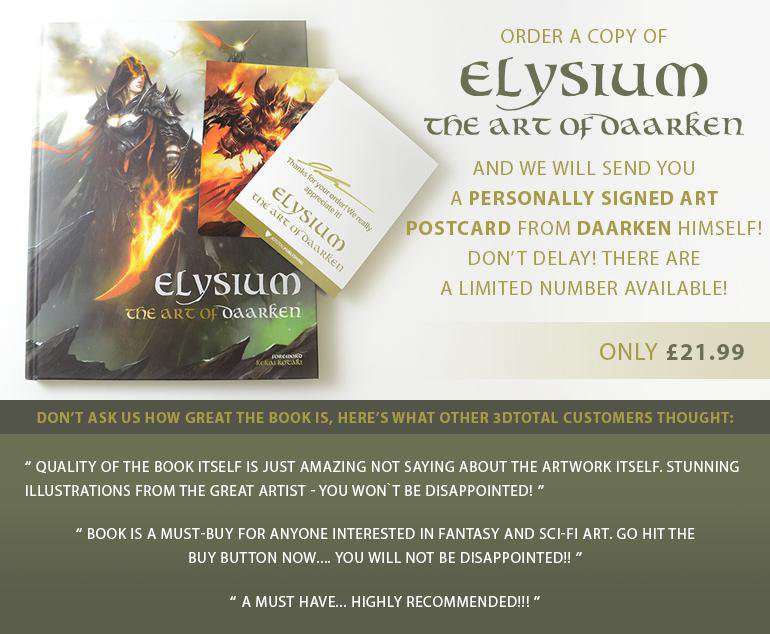