Freelance 3D illustrator, Cesc Grané, talks about his passion for Japanese culture and designing his characters

Freelance 3D illustrator, Cesc Grané, talks about his passion for Japanese culture and designing his characters

Cesc Grané is an illustrator whose collection of characters and iconography are inspired by "Japanese aesthetics and particularly art toys”. His imagination is filled with an abundant cast of characters through which he builds "ethereal worlds with oneiric and positive narratives”.

3dtotal: Hello Cesc, thank you for speaking to 3dtotal! Please could you introduce yourself to our readers with a bit about yourself and your career?
Cesc Grané: Hello and thanks to you for inviting me! I am a digital illustrator and character designer mainly working in 3D. I'm from Barcelona, where I first studied Technical Industrial Design Engineering and an Upper Graduate in Design, so I studied different design disciplines and finally focused in graphic design. I worked for some time in a communication agency as a graphic designer, and started developing 3D characters for fun. I made my first 3D character in 2006; it was a simple mountain inspired by the hills in Dr. Slump. Step by step, I studied 3D by myself, and kept on working on my own style until I got some commissions and decided to become a freelancer. 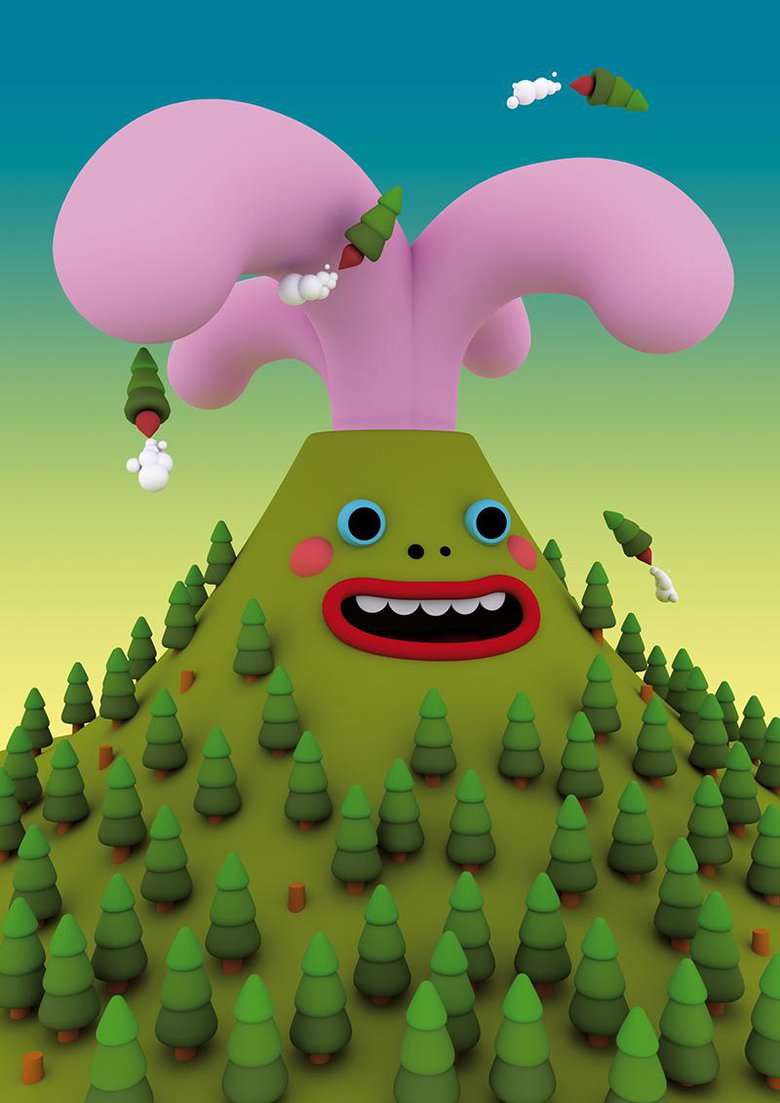 Fujiyama (2010)
An illustration inspired by Mount Fuji, the highest mountain in Japan

3dt: Who or what are your biggest inspirations as an artist?
CG: My references keep growing and changing in style, but I've always been keen on designer toys and Japanese culture. When I saw a designer toy for the first time, it was love at first sight: it was the perfect combination of product and graphic design, and reminded me of the action figures I used to play with. I made some research, discovered the Japanese characters, and the kawaii ("cute”) style, also artists such as Takashi Murakami, Yoshitomo Nara and DEVILROBOTS, and I've been following their work since then.

Recently I had a crush on artists like Makoto Aida and Shigeru Mizuki, and the characters of Bikkuriman, created by Toei Animation. None of their artwork is made in 3D, so maybe their influence is not recognizable in my work, but the concepts and feelings in the background are a true inspiration to me. 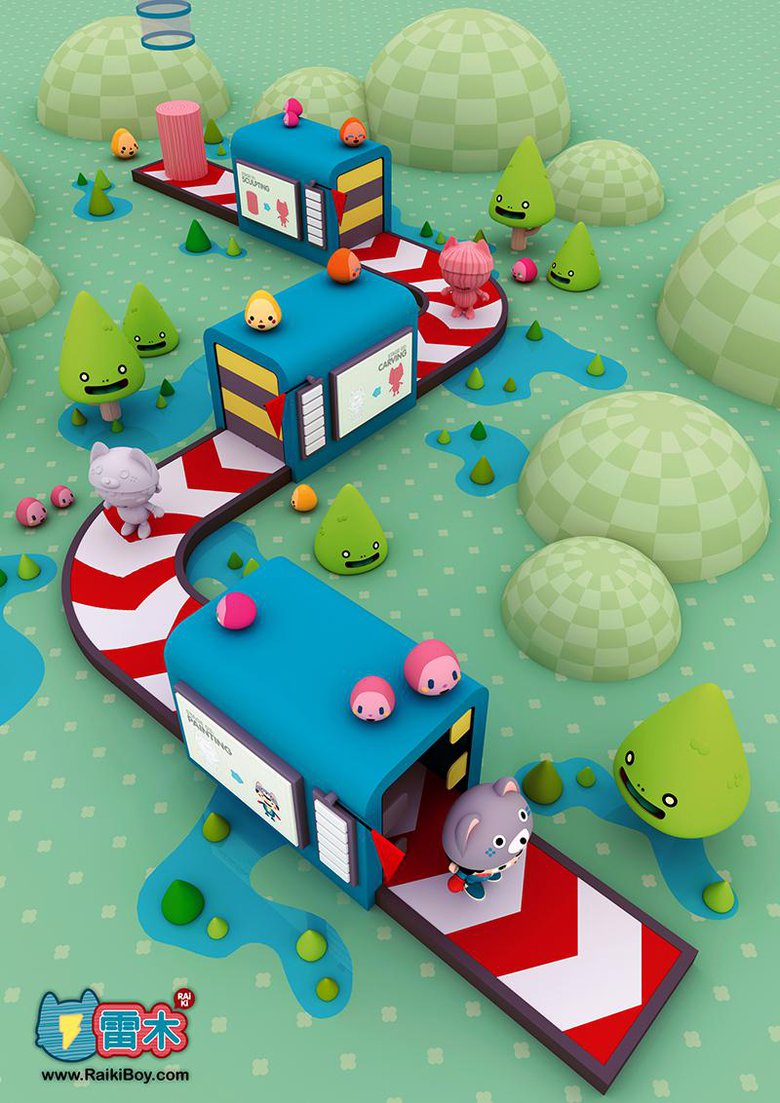 Raiki Boy – The Origin (2010)
Raiki is a magical boy made of wood, created by energy from lightning in the midst of a mysterious forest. Raiki Boy is a personal project, which you can learn more about at www.raikiboy.com

3dt: Did you always aspire to be a 3D artist? How did you come to work with 3D?
CG: I used 3D software for the first time when studying product design at college. It was Pro/ENGINEER (now PTC Creo Parametric), and it meant a whole new world of possibilities for me. I was then living with a classmate who used 3ds Max to make video game characters and environments, and he taught me the basics of modeling, mapping and rendering.

At that time there was a project based in Barcelona called Robot Magazine, in which anybody could upload an illustration every week for a whole year. If you didn't upload it one week, an obituary would appear with your name on it and you would be out for ever. I took part in it and although my 3D stuff was quite simple, it kept me working, and after a year I had a large portfolio with which I could promote myself. 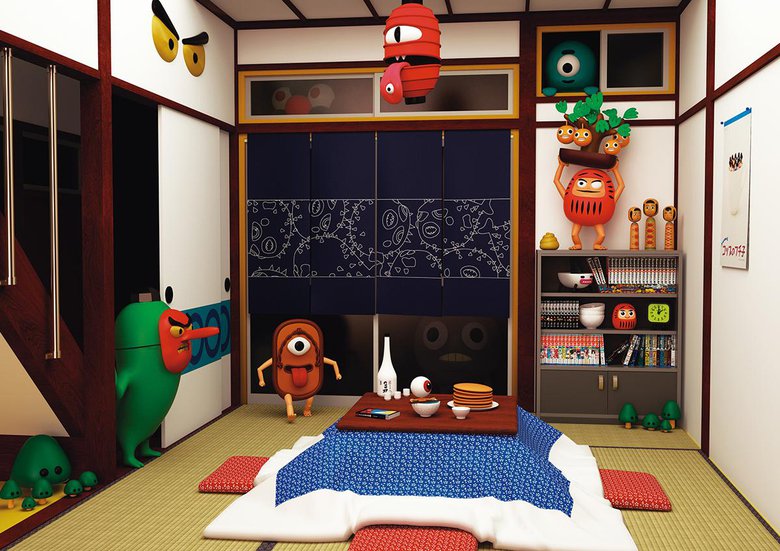 The Yokai of my house (2014)
While living in an old house in Tokyo for one year, the owner approached Cesc to tell him the house was considered haunted, inhabited by yokai. He never once saw them, so decided to make this illustration about how the characters could look in the living room at night

3dt: A lot of your work is inspired by Japanese culture. Could you tell us about your travels and how Japan captured your imagination?
CG: I've been interested in Japan since I was a child, when I watched the anime series Dr. Slump and Dragon Ball on TV, and later on, movies like Akira, Ghost in the Shell and the Studio Ghibli movies. Their characters and stories blew my mind and awakened my interest for that country.

I went on a holiday trip in 2007 and learnt about other Japanese stuff like the yokai, their mythological characters, and the ancient ukiyo-e paintings among many other cultural expressions. I dreamt about living there someday.

On a third trip, with no previous planning, that dream came true when a Japanese company offered me the chance to work for them. I settled down, and for a year and a half I had an amazing experience of the real Japanese way of life, which was nothing like anything I thought I knew.

Fugu (2011)
A shoal of blowfish. They contain lethal amounts of poison in their organs but have been eaten for the inhabitants of Japan for centuries

3dt: What is your process for designing characters? What makes a design fun for you?
CG: I always start with a simple sketch in my notebook to catch the idea in my mind. Then I develop the character in 3D and make the final decisions about their shape as the modeling process goes on. I always try not to repeat old features in new characters; I even check old designs to avoid repeating myself. I go for kawaii aesthetics and neutral expressions, which is a simplistic style and may seem basic, but has many possibilities. The fun side of character design is the story you can read behind each creature: where he comes from, what he thinks, how dark he is on the inside, and what would he talk about in real life. 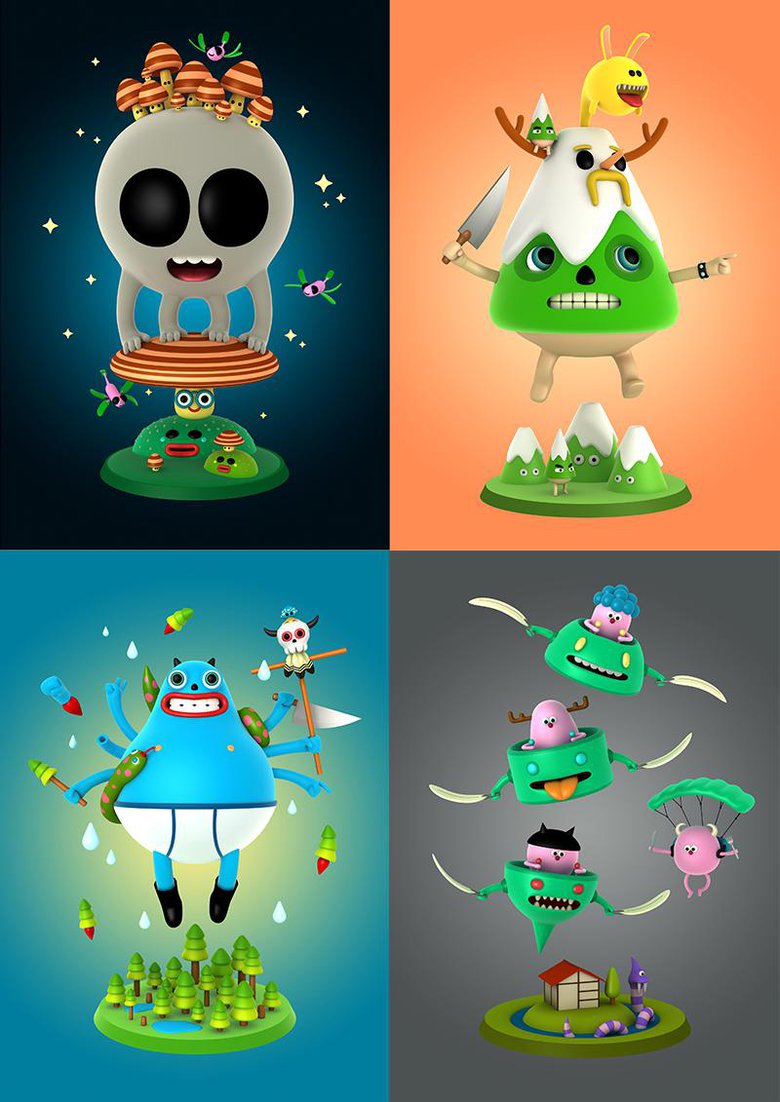 Artwork inspired by the yokai – literally

3dt: Which tools and software do you use, and why do you like to use them?
CG: I mainly use 3ds Max and V-Ray for the modeling and rendering, and Illustrator and Photoshop for the mapping and the final adjustments. I learnt 3ds Max myself and I feel comfortable using it, although I still have a lot to learn – which means I still have a lot to improve on, and I love the idea of keeping on learning and improving.

I took a V-Ray course some time ago, and it really made a change in the appearance of my renders. The quality of lighting and materials match better what's in my mind. 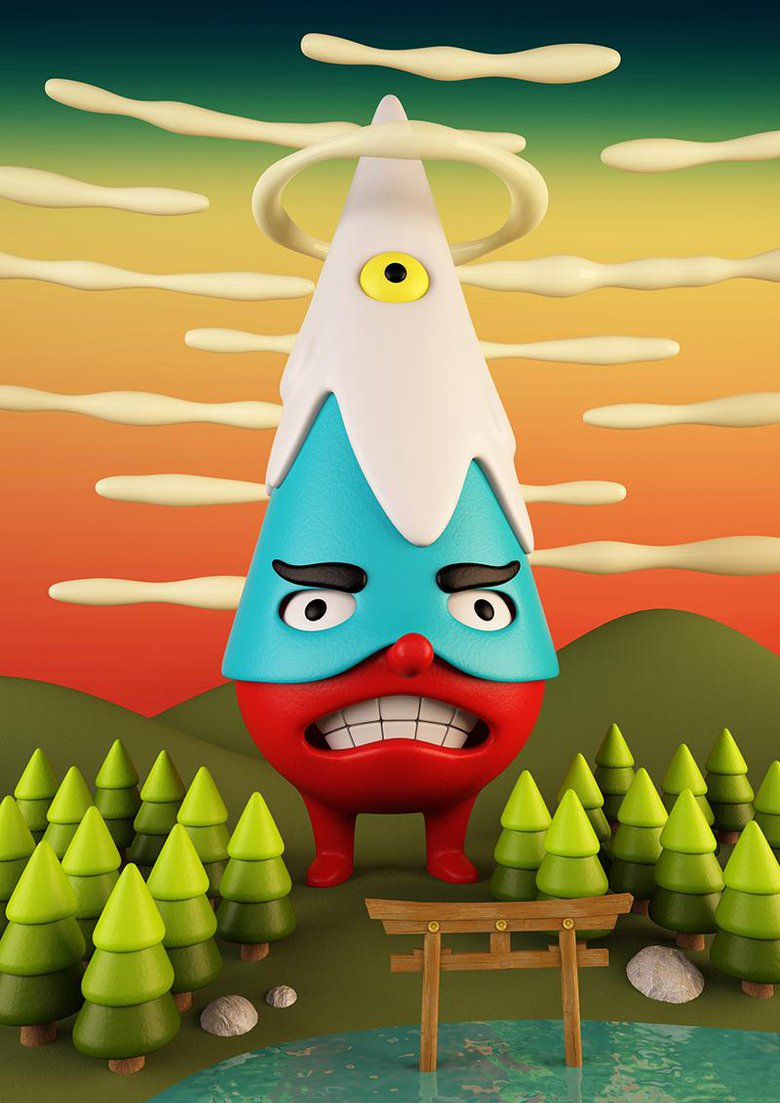 Fujigoo (2012)
After staying some time in Japan and soaking up its culture, Cesc created this character, inspired by Mount Fuji and Tengu, a Japanese mythological creature. He hopes to produce it in matryoshka toy form some day

3dt: Could you explain some of your typical 3D workflow, for anyone curious about your work process?
CG: I start creating the objects in the scene – both background and characters – with simple low-poly geometry, and I mold them to have a basic idea of how the scene will look. Then I apply a soft MeshSmooth to the objects while working on the details.

When I make the character I start with the legs/arms and then decide where to place the facial expression and how will it look. Next, I add the small details like horns, cheeks, teeth or accessories if needed. Once I have everything in the scene, I do the mapping and add materials to the objects. I add the lights and camera then render the scene in a low resolution to check the details, and then do any modification until everything looks good and I can make the final render.

JR Yamanote Line Station (2014)
The Yamanote-sen is the most popular metro line in Tokyo. Cesc developed The Yamanote Line Family with 12 mascots representing 12 of his favorite stations on the line

3dt: You often exhibit your projects, too. What are the advantages of taking part in exhibitions? How different does 3D work feel when presented in an exhibition space?
CG: The internet is pouring out a large amount of information. Every day we see hundreds of images that block our minds, and sometimes we don't have time to process all the stuff we are receiving. All kinds of images and content are consumed rapidly every day, and we forget that some of them deserve some time.

When visiting a physical gallery, you have the perfect context to take your time and appreciate the artwork at its best; having an exhibition is the perfect opportunity to show one's work. It's also a great opportunity to work deeply on personal projects and improve your skills. I really like seeing my works in a different format and environment, and reaching other audiences.

Freedom is the worst because you need to focus on what you want to do for real and sometimes it's difficult to find the way. Time organization, networking, creative processes or politics can be hard sometimes, and you have to learn to deal with them all as well. My advice would be to focus on your true goal and prepare to work hard for it. 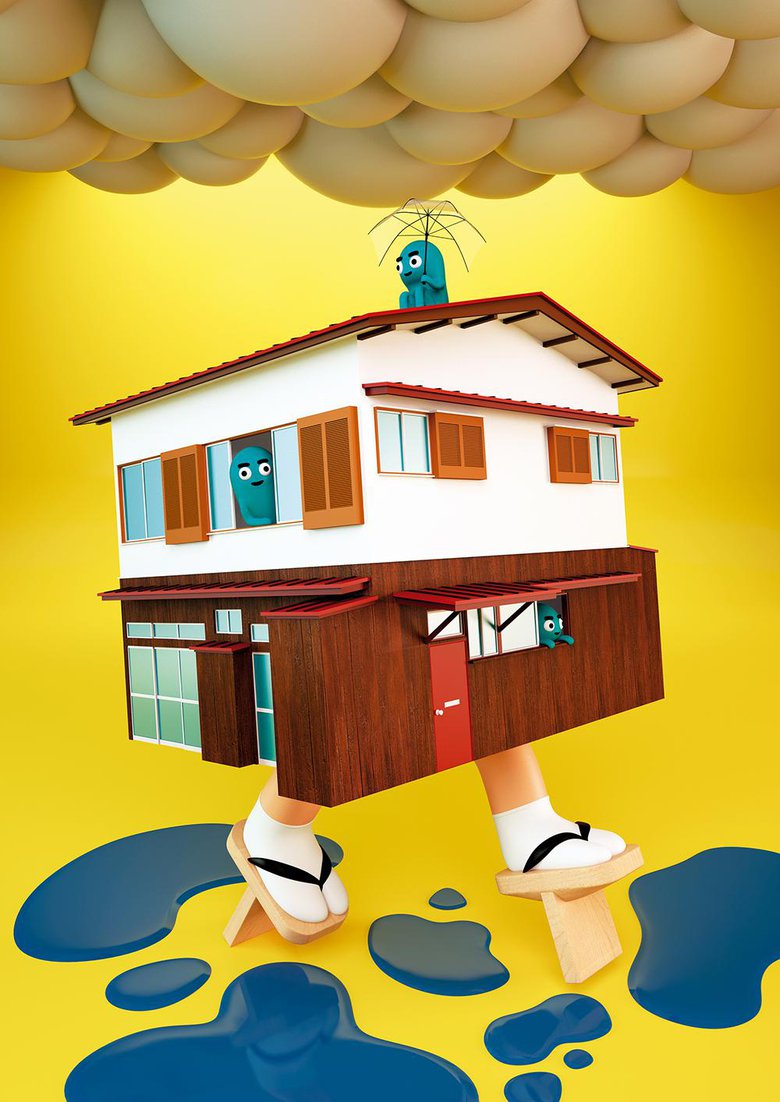 My house is escaping from the typhoon (2014)
The first week Cesc moved to this house, a strong typhoon came to Tokyo. He was very keen to see his house escape harm as the typhoon engulfed the whole city

3dt: Thank you very much for taking time out of your busy schedule to take part in our interview! We really appreciate it.
CG: My pleasure. Thanks! :)