Interview with Atomhawk Design: The Realm 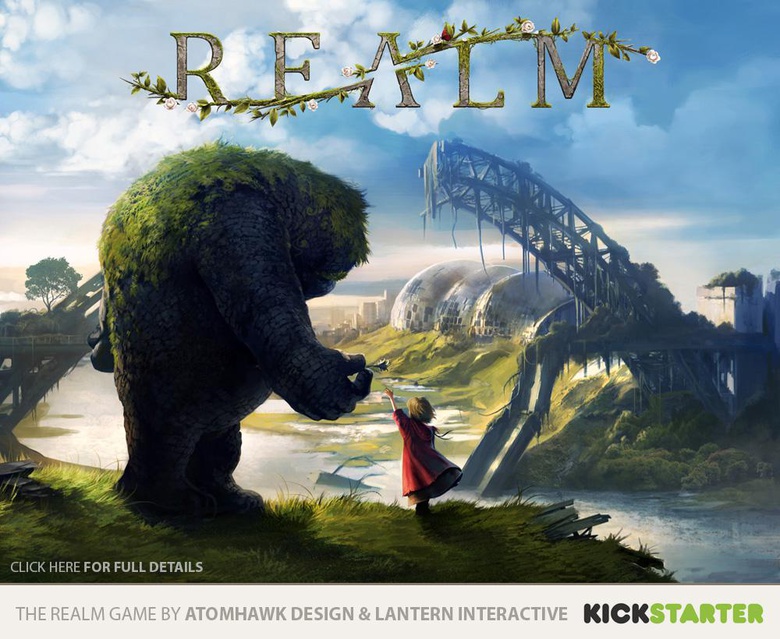 Our good friends over at Atomhawk Design have just launched their Kickstarter project The Realm, a point and click adventure game with some charming artwork. We catch up with Ron Ashtiani to see what it's really like to work at the design studio and get to know the game in a little more depth.

For anyone who is new to the world of digital art, or who is unaware of Atomhawk Design, could you tell us a little about who you are, the exciting projects you have worked on and what the future holds?

Atomhawk was founded by four artists from Midway Games back in 2009, with the vision of creating one of the world's best creative studios and creating the best art we could muster for games, films and digital projects. We had no idea at the time just how big some of the projects we might work on would be.

We've been in business for four years now and the team has expanded to 20 and includes some of the industry's best artists. We've worked on over 20 projects including games like Mortal Kombat, Driver, Dead Island, Devil May Cry and most recently Injustice for Warner Bros. We've also worked on J.K Rowling's online Harry Potter experience "Pottermore" and have provided concept art for a number of AAA Hollywood movies... that we can't talk about just yet (Laughs).

We have also been successfully designing outside of the traditional concept art work we're known for, providing user interface and user experience design for a number of devices and applications, especially for touchscreen devices.

As for the future? That is a tough one. I guess we just want to keep doing what we are doing as it seems to be working for us. I think key areas of expansion will be more movie work and UI/UX design, but concept and marketing art for games will always be core for us as it's where we all came from.

As many of our site users will know, 3DTotal created the fantastic book The Art of Atomhawk Design, 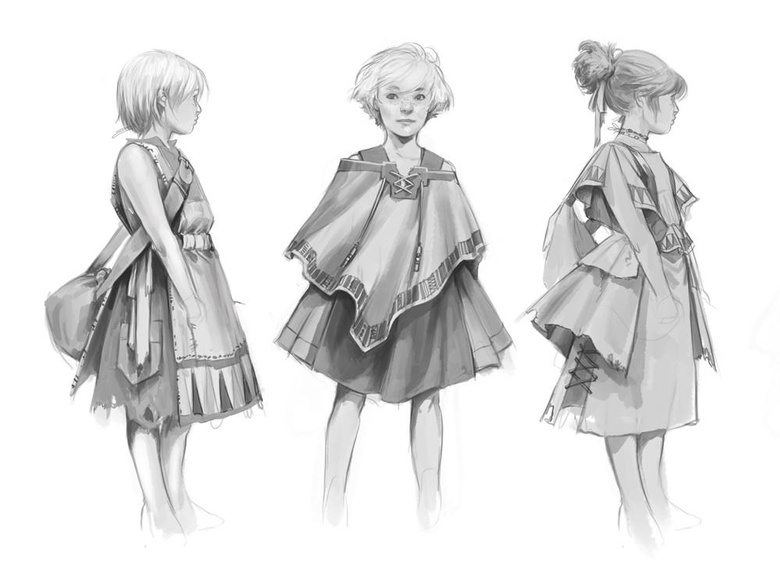 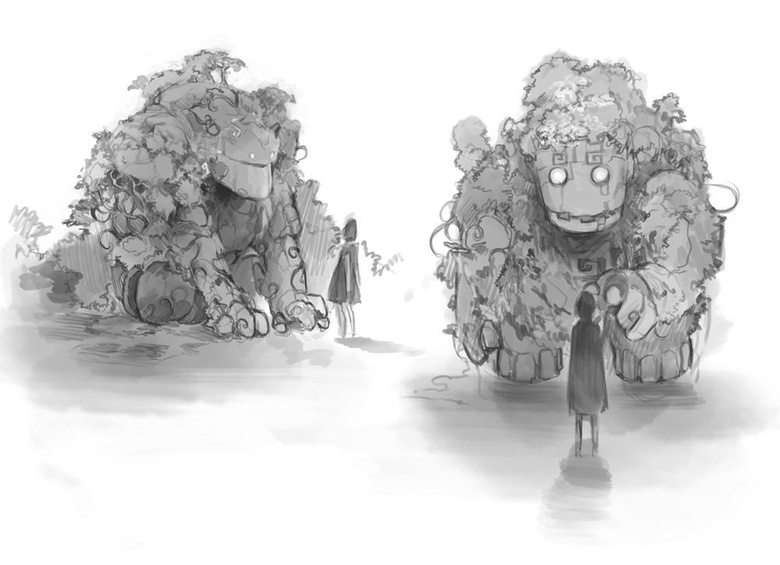 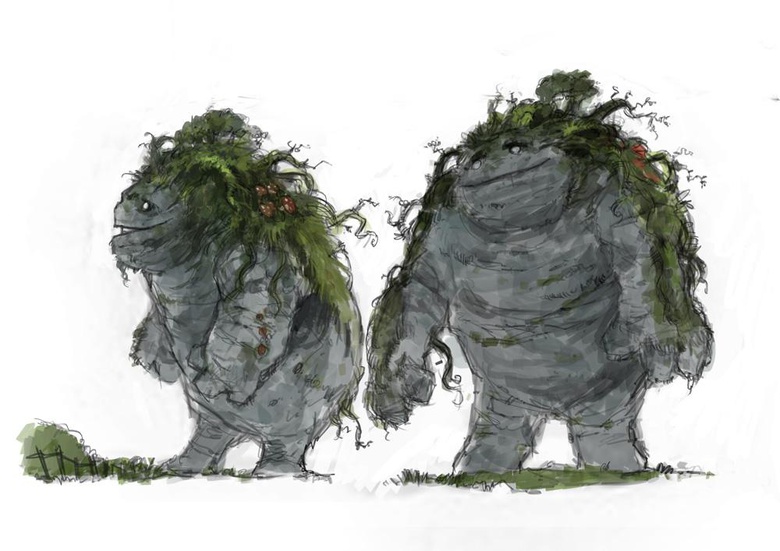 which is a tantalizing insight into how your creative minds work together on each project. What kind of artwork and unique design elements should we expect to see in the concepts for The Realm?

The Realm is a beautiful and enthralling adventure game. Its engrossing story explores the growing bond between the two central characters. We are huge fans of the great point and click adventure games of the past, and of the emotional storytelling seen in epic journeys like Ico.

The story follows a young girl called Sarina, who embarks on an epic quest to save her dying mother. On the way she befriends Toru, a giant stone golem, and the unlikely couple go on a treacherous adventure together, across wild and beautiful lands.

We developed an art style that combines the finish and quality of lighting that you see in western fantasy art, and then combined it with the color palette, unusual location and heartwarming character relationships, influenced by Japanese creators like Miyazaki.

The Realm is set in the far distant future, when the world has been reclaimed by nature. Once proud cities now lie abandoned; overgrown with strange plants and twisted vines. Magic and mysticism has returned to earth and there are strange creatures lurking in the forests.

We wanted to stay well away from dark and moody future dystopias, and try to focus more on nature and how it can be both beautiful and deadly - often both at the same time!

We've tried to capture an almost Disney-esque quality in the characters, so they can be

appreciated by both genders and a range of age groups. This is something that was a lot harder than we thought it would be when we started; there's a reason why Disney have stayed on top of their game for so long!

The world features our local city of Newcastle, but significantly altered. The people of this world are our distant descendant. They haven't reverted back to being cavemen; they have just returned to simpler ways like farming, hunting, etc., but have taken some of the modern building knowledge we have today and applied it to rustic materials (very evident in our village designs). 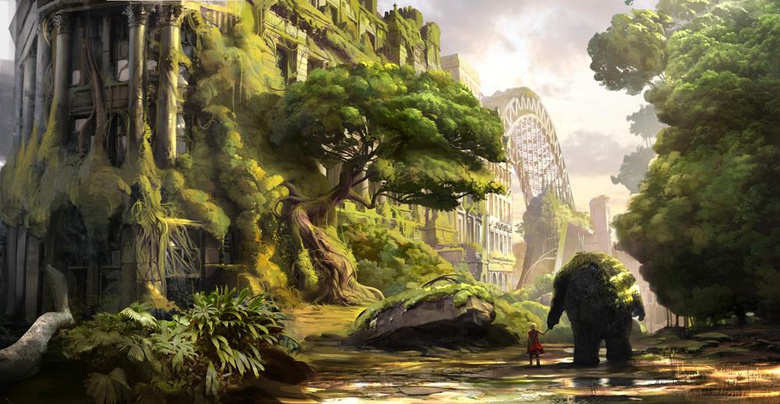 Most artists tell us that they begin a project by searching for references and looking for elements to create the base designs for their concepts. How did you start your project and what kind of references did you search for to influence your fantasy world?

At the beginning, everyone had a different idea as to what the project should be; we didn't even see it as a game at that point. It was an exercise in new universe creation and something to focus our talented group on to make an interesting studio portfolio piece.

After a few, quite heated, brain storming meetings, I persuaded everyone that trying to blend the key features of western and eastern art to create an epic adventure story that would appeal to all ages was the way to go. From there we started researching a ton of Japanese films like those of Miyazaki and studio Ghibli, as well as animation productions by Pixar and DreamWorks. These references mostly influenced us in terms of color palettes, atmosphere and character proportions, and the rest was derived from looking at nature, history and our local surroundings.

The hardest parts to design were the two main characters. Sarina, for example, is a young girl coming of age and so she can't be too grown up, but at the same time she can't be a little kid either as children always want to look up to inspirational people who are a little bit older than they are. We eventually settled on her being about 13-14 years old, but early designs depicted her as about 8 years old.

Toru the Giant was also tough in that we wanted him to be made of stone. but also have emotion and a softness towards Sarina. It was quite hard to get right in a giant rock monster! 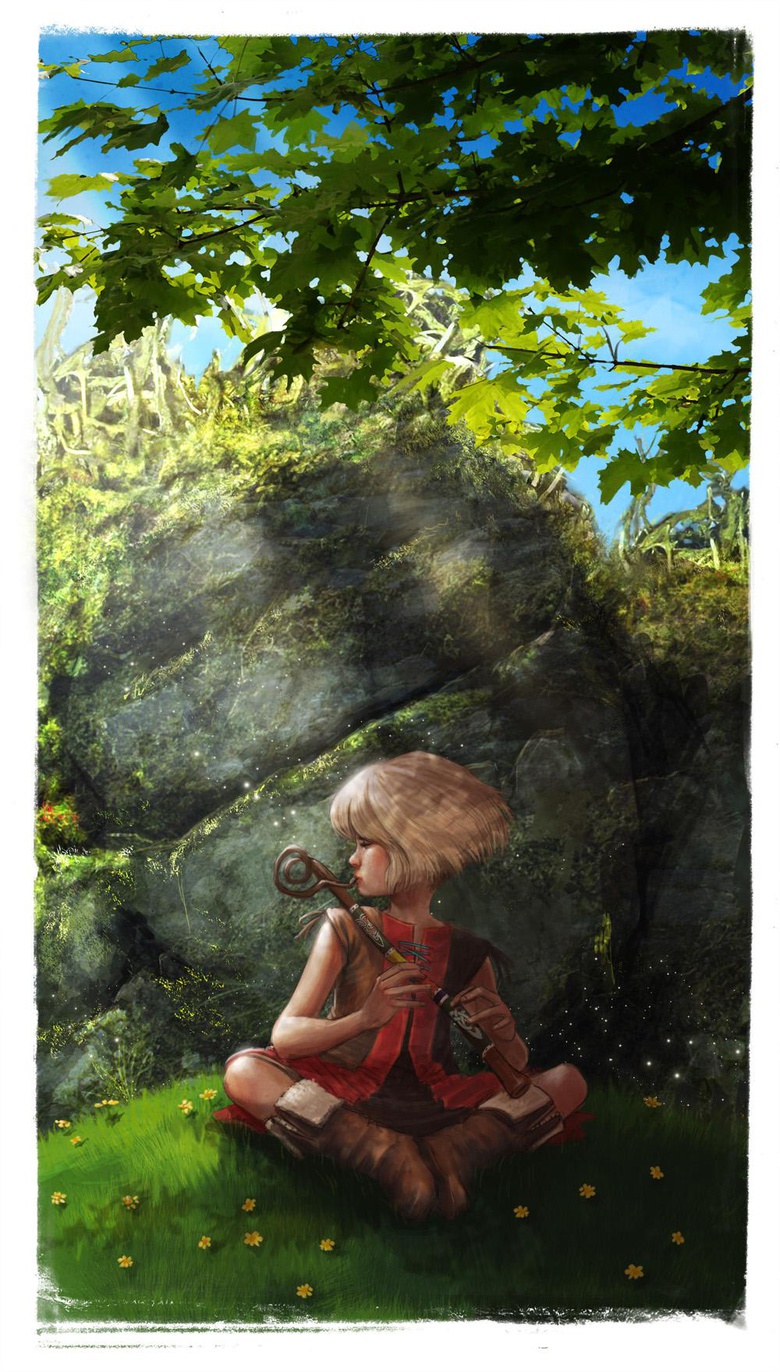 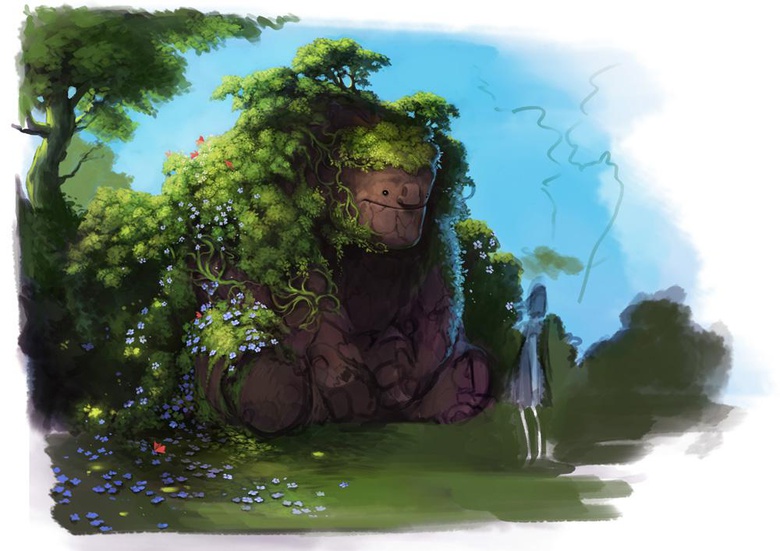 The story running throughout The Realm taps into recognisable human emotions, relationships and journeys. How important is it to give animated characters relatable human attributes and experiences when telling a story?

With the camera angle that The Realm will be played at, most of the emotion will be shown through body language and so we needed to be sure not to cover our main characters up too much with big clothes and bulky items. A lot of the emotion will come from how they interact with each other; for example, if Sarina is riding on Toru's back and then goes to climb down, he subtly takes her hand or puts an arm in a strategic place, ready to catch her if she falls.

The game's world also conveys the status of their journey - the weather and lighting play a key part in this. Sarina starts her journey hopeful and rebellious; it is a new dawn. Her journey then gets hard and so the levels become stormy and wet. When she meets Toru he saves her and they start to become friends; for this section of the game we go for warm, sunbathed, afternoon colors like those seen in The Lord of the Rings movies when Frodo is in the Shire. As their journey becomes perilous it is dusk/night and everything starts to take on a sinister edge.

The Realm environments contain many elements that look like they have been drawn from different genres of art, like futuristic, sci-fi buildings, fantasy woods and historical looking market places. What techniques and tricks do you use to tie these diverse elements together to create a cohesive world?

The key to tying different genres together is to use a consistent timeline in your universe. So by that I mean you can mix fantasy and sci-fi, but you have to establish them in a historical context.


In The Realm, the age of technology (our current time) has come to an end, through an event that we don't want to give away just yet. Just as before the technological age, mysticism and magic have returned and the sci-fi elements are relics and have their own mysteries which help tie them into the fantasy genre. I noticed that the guys at Bungie have also done a similar thing with their new game, Destiny.

Besides, who doesn't want to see a magical rock monster and robot mechs in the same universe? (Laughs).

You mention on your site that the game is being designed primarily for touchscreen devices. Is it possible to play using a desktop computer or laptop as well?

Yes of course! Basically point and click games were only on PC and so while PC is a core market for this game, the interesting part of the game design user experience was coming up with a way to make it also enjoyable on touchscreen. While we were at that, we also wanted to streamline some of the annoying aspects of point and click games, namely the endless clicking on the screen to see if you can interact with something and also the confusing inventory systems. It will play the same on all platforms due to our new innovations on the control system.

Many of our readers are students of some kind or another; are there any words of wisdom or top tips for those hoping to create something similar to The Realm in the future?

I know that this is quite a nebulous thing to say, but the main thing is to persevere - although to know when the opportunity is right will make it easier for you. For example, if you are 16 years old and have never had a professional job before, then while there is a chance you could create something viral that goes crazy, the odds are that you won't know enough yet to be able to focus your energy on the right things. When I was younger I had a million ideas but could never sit down long enough to develop them properly.

If you have some talent to begin with then the key thing is to train enough to start working as a pro and from there you will learn a lot about the different creative processes as different types of projects need different methods. You'll also learn how long it takes; we started working on The Realm in 2010.

From there you just need to start dreaming, and never be afraid to rethink your ideas. You see many artists and designers bullishly claim that they just had a vision and then created it. I'm afraid that it doesn't work like that; you have to iterate, throw ideas away, and be prepared to start again over and over. Challenge your ideas to be sure they are solid. Also focus-test them a lot, and show your friends and colleagues to see how they react - chances are if they give you a lukewarm response, the public won't be any kinder. We tested The Realm over and over and each time got some great advice from people.

You can check out The Realm on Kickstarter here: The Realm and read more about the game over at the website: www.therealmgame.com

If you like the look of their work, make sure you get a copy of their 3DTotal published book: The Art of Atomhawk Design: Volume 1 for the discounted price of £9.99!