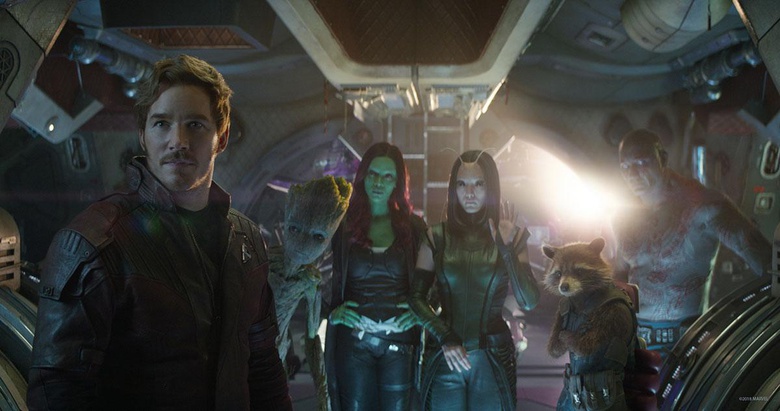 With Avengers: Infinity War dominating the box office, the San Francisco facility of Territory Studio led by Creative Director Marti Romances was responsible for providing 130 animated screens that included UI for the updated Milano piloted by the Guardians of the Galaxy, as well as the Avengers compound...

This film had many different aspects, starting with the fact that we were shooting in Atlanta instead of the UK, and that it was the first time that we see the Guardians of The Galaxy merge into the Avengers world, notes Romances. Due to the narrative, action scenes, and the sheer number of superheroes to fit in, there were more changes in the way the story evolved compared to other Marvel films we have worked on. The San Francisco operations did not share work with the other Territory Studio facilities located in London and New York City, but was provided with plenty of storyboards, concept art, and previz. Our desks in the art department were right next to the set decoration department, and most of the team we already knew from Age of Ultron, Guardians of the Galaxy or Captain America, so we knew who to go ask to get the right sort of inspiration. 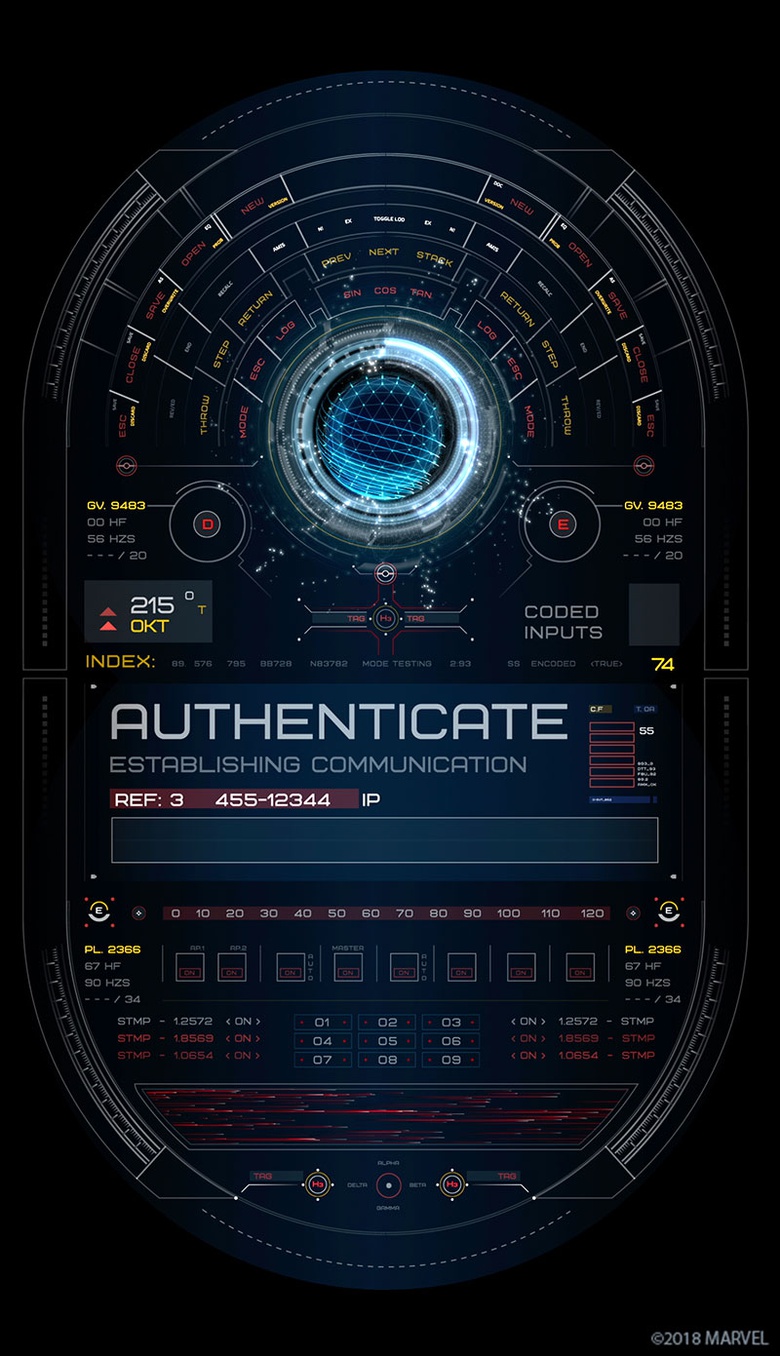 We designed most of the user interfaces in Illustrator and animated those 2D elements with After Effects, explains Romances. For the 3D parts we did all the work in Cinema4D, rendering with Arnold, and also using X-Particles for some simulations. The pipeline did not need to be modified. We were producing assets for the onset props so we did not have to adapt to any other vendor requirements. Even when we were sending some of our graphics to visual effects for the Escape Pod, for example, we still shared the same Illustrator files we created the graphics with. 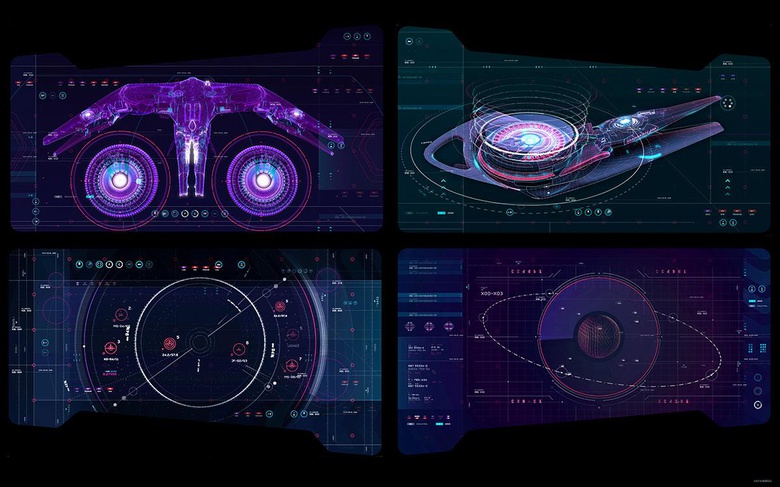 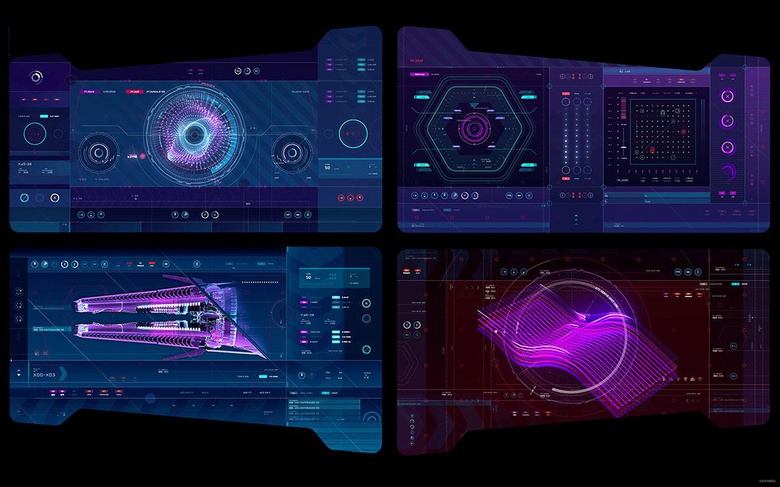 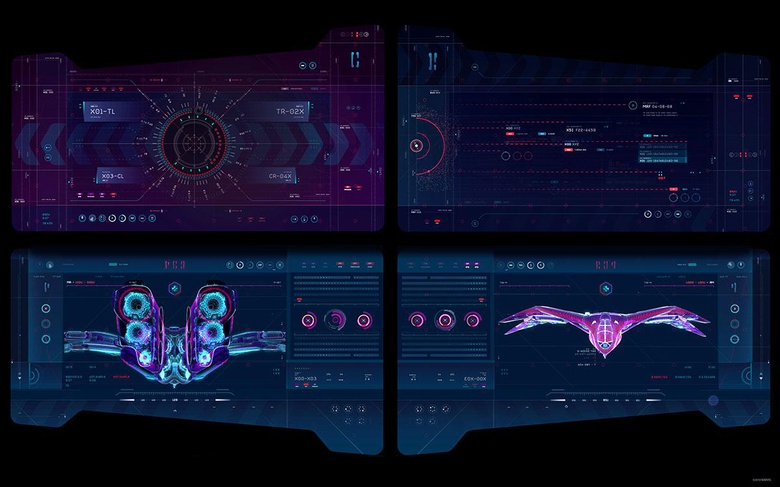 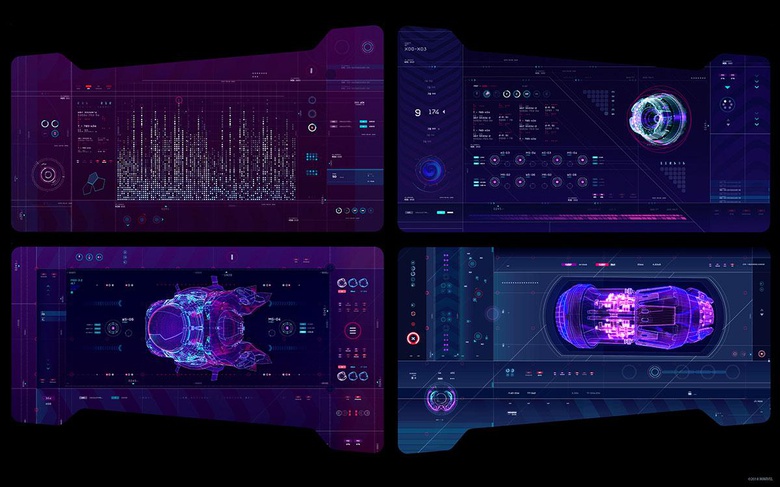 Maintaining consistency was paramount when dealing with the visual effects team headed by Dan DeLeeuw. Our concern was to maintain consistency between the detailed graphics we created for onset, and those which would need to be comped in post, so our conversations in Atlanta were about how to achieve that, notes Romances. We showed them what we were doing on-set in terms of the quality and detail, and made sure to leave a 'consistency request' for when the compositors applied our graphic elements in VFX.

Guiding the look development was production designer Charles Wood who wanted to avoid symmetrical designs. Charles was always clear about what he wanted, states Romances. In the case of the new Guardians spaceship, Charles wanted us to bring in abstract elements, with a diversified color palette that spanned cyans, blues, purples, and pinks, which is completely different to the look of the previous Milano. Every UI had a distinct appearance which spanned six consoles for the pilot, co-pilot, engineer 2, engineer 2, gunner 1, and gunner 2 that all featured a combination of two to six medium screens, plus secondary control panels. Each screen had different background tones within the range Charles defined with abstract and organic looking motion elements to reinforce the alien backstory of the Guardians and the ship. 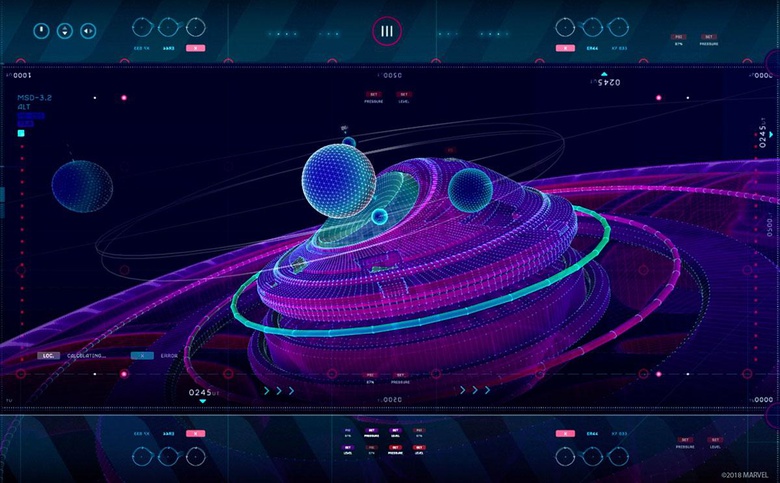 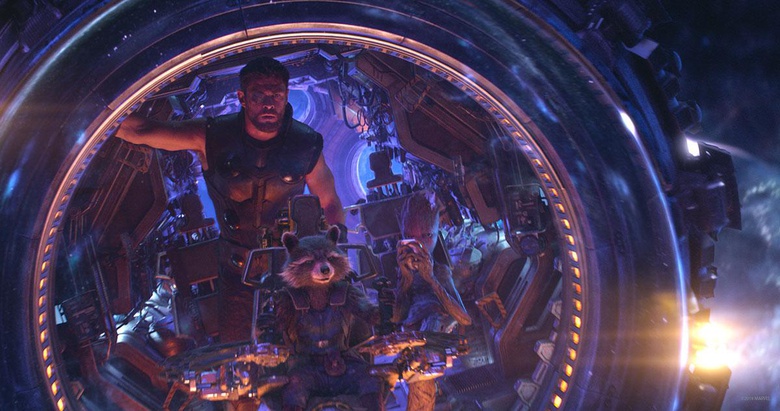 It was important to convey that the ship had seen action and had been hacked and jacked up by Quill and his team, reveals Romances. Therefore, we incorporated glitching and malfunctioning to give it some character. Onset playback assisted with lighting and character interaction. We believe our graphics helped the overall look of the set with the illumination they provided. Especially, the ones in the galley at the back of the spaceship, where it is darker and screens like the table or the background tubular screens were showing up nicely through the lens. Schematics and data screens were situated on each side with the table consisting of three landscape screens. Graphics were produced for the door airlock controls, along with the Escape Pod which involved a HUD design that enabled the visual effects team to overlay on top of the big curved glass at the front. 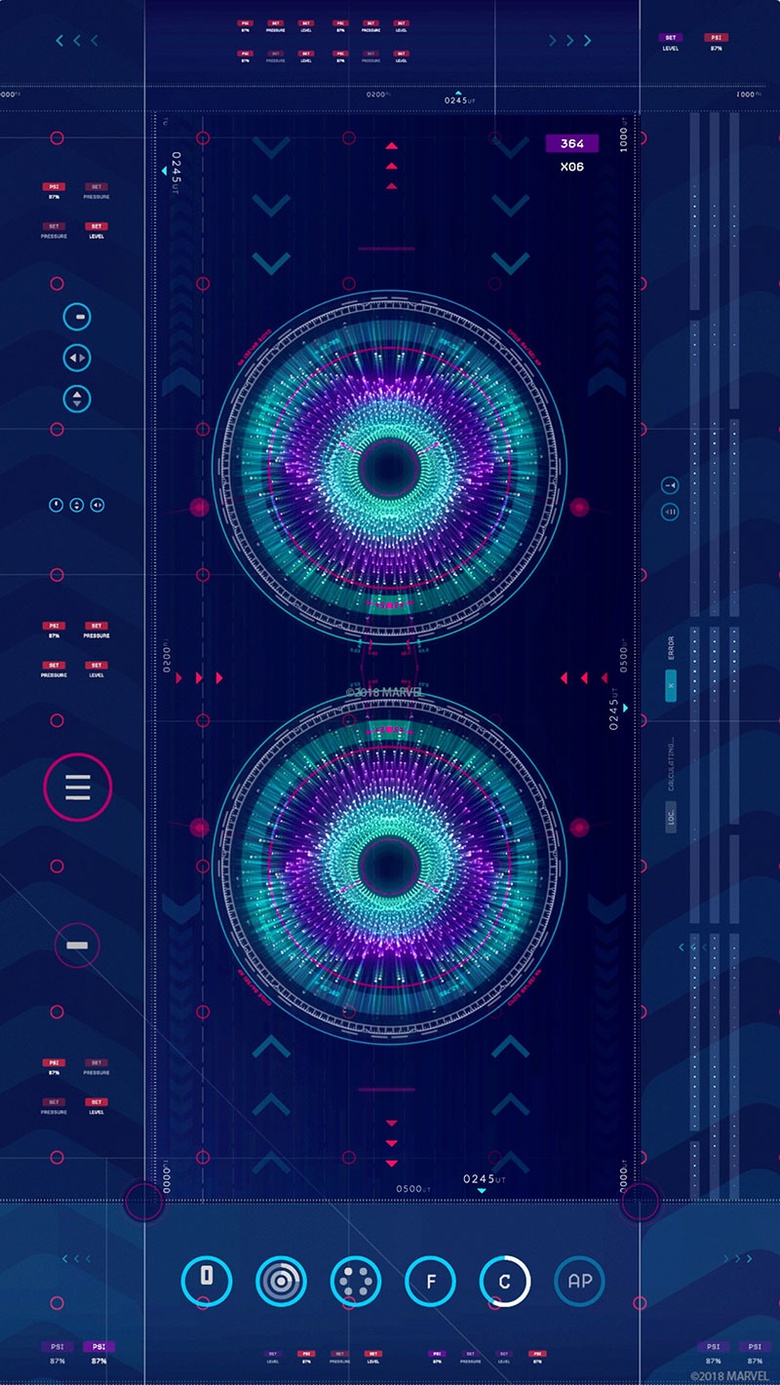 In the case of the Avengers Compound, we evolved the look and feel of our original UI from Age of Ultron to suggest upgraded systems, remarks Romances. Instead of narrative driven screens like in Ultron, we created more discreet utility elements, like power shacks, door controls, elevator screens, and whatnot. The style was influenced by previous graphics produced for Stark Industries with one of the screens being interactive as a fingerprint scan at a Guard Shack. The biggest challenge was to re-imagine the Guardians new spaceship and the creative freedom that Charles gave us was essential to achieving a strong new design direction. It helps that weve worked together on several other Marvel films so we have a good understanding of each others approach and expectations, and that has built a lot of trust.

Some of the UI contributions made by Territory Studio will have to wait until next year to be seen. Were excited to see how our screens look and play together as a whole in the Guardians new ship, but we also created some beautiful work for a number of other sets, so were really looking forward to seeing those in the future. 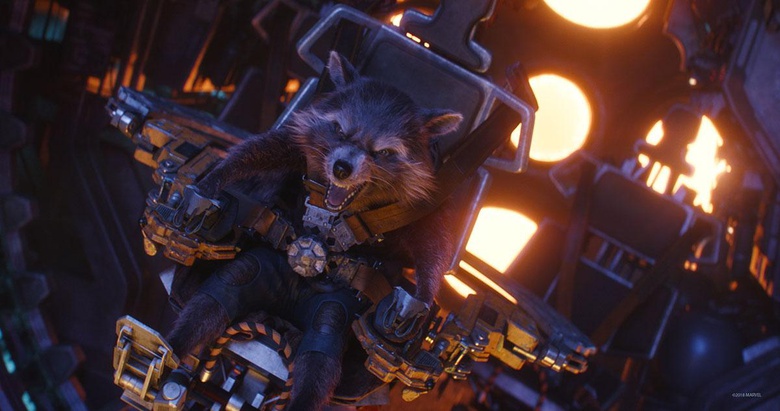 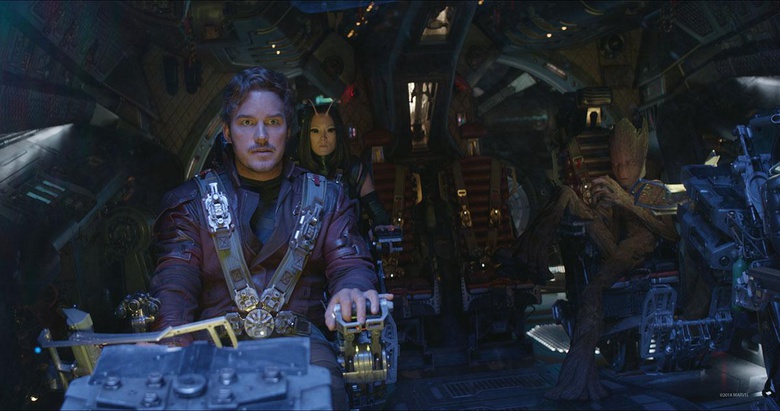