Game to Play: Territory Studio talks about Ready Player One

Immersing themselves in Ready Player One were Territory Studio Creative Director Andrew Popplestone, and Creative Lead Sam Munnings who collaborate with Digital Domain and ILM to produce graphics for the real and virtual reality worlds.

On this show, our pipeline proved itself as working with both DD and ILM was essentially working two shows simultaneously, notes Popplestone. Digital Domain gave us more of a loose brief with lots of room for creative freedom. Coming on board in post, we never worked directly with talent to support performance, instead we referenced concept art, storyboards, and the book itself, and DD supplied blank film shots with key geometry. ILM was more prescriptive and gave us pre-approved animated pre-viz sequences that guided our approach. The pipeline had to be setup differently to deliver and export formats to Digital Domain and ILM. Our work mirrored the full VFX pipeline, from laying out the graphics in a 3D scene, animating and lighting it to reflect the full CG environment, and rendering it to create slap comps for ILM to integrate in the final comp.

The priority for production designer Adam Stockhausen was to find the best route for the visor graphics, and thats what we came on board to do, states Popplestone. His conversations with Steven Spielberg were about finding a balance between super sophisticated tech and an 80s look and feel. While the original book is all about celebrating the pop culture of the 1980s, this film needed to make it relevant for todays kids too, so there was a balance to be struck in the design language.

There were different style and color guides for the graphics featured in the real world and the Oasis. In DDs real world, we were creating assets with physical props in mind, daylight and indoor light, and color tones. The CG environment of the Oasis was limitless. Thats the beauty of a virtual world and to that extent it doesnt need to conform to standards. Apart from the key colors of the five main characters, there were no strict guides.

We created graphic assets with narrative layers that tied into story beats, action, and performance, explains Munnings. In some cases, we were asked to find the best way to tell complex story beats using graphic devices. For example, in the Oasis shopping centre after Wade/Parzival [Tye Sheridan] wins the coin after finding the first key, he goes shopping. We needed an elegant device to convey the rags to riches story and implications now that he could buy the most advanced gear, including the haptic suit that was so out of his reach at the beginning of the film, with the commercial playing on a billboard behind him. The commercial was treated like a graphic asset. We applied our advertising experience and devised a 30-second treatment (storyboard, scripts, live-action, and CG), essentially a commercial pitch that included the tag line Feel Everything, including graphic and typographic treatment that references visor damage grid map.

The customization and character brands were our own suggestion to Adam and he loved it, reveals Popplestone. In some ways this created a lot of extra work for us, but it was gratifying to see how well it worked. These brands that were initially designed to badge the visors / HUD graphics but the marketing loved them so much that they have been applied across posters and artwork. A framework and visual language needed to be created for the generic visor HUDs worn by IOI (bad guys) and GSS (good guys) that also allowed room for customization. It involved balancing a more playful 80s vibe for GSS with a sense of super advanced tech, and military/corporate cues for IOI. The information in this basic framework includes location, ammunition, name, coins, and score. 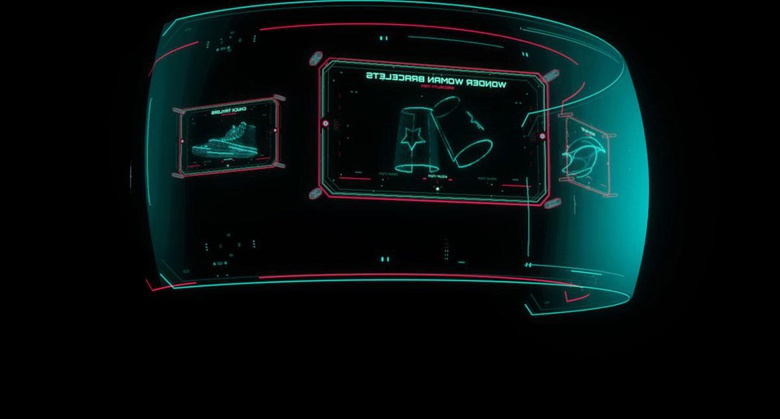 Each visor/HUD utilized by a main character had to reflect their VR character and preferences. We ended up adding five graphic layers to each character visor/HUD to make sure the content and 3D depth could be shown credibly, explains Munnings. This added visual interest, complexity, and Easter Eggs for the audience/fans and helps the audience quickly distinguish between the characters. 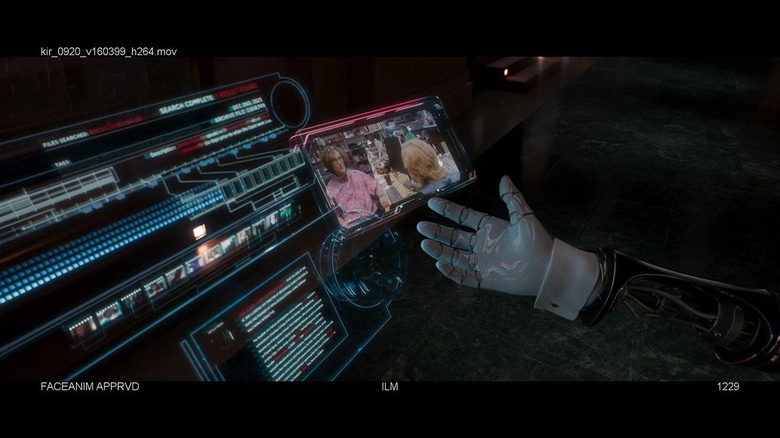 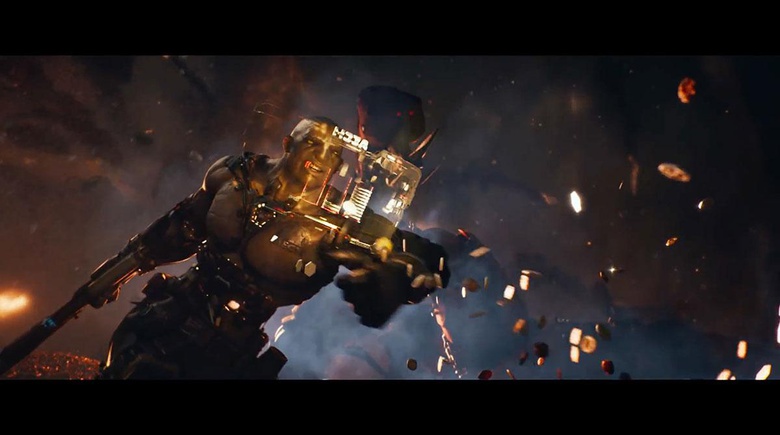 Vehicle HUDs were created for the DeLorian and monster truck. Both HUDs were customized to reflect Parzival/DeLorian and Aech/Monster Truck colorways and the nature of those vehicles. The UI for the DeLorian took a strong steer from the rear brake lights of a real DeLorian (Back to the Future). The Big Foot HUD inherited this rugged structured UI that even featured bumps and scratches. There were a few hero shots that we rendered to camera and then we were sent the vehicles 3D models which informed the design and display layout. 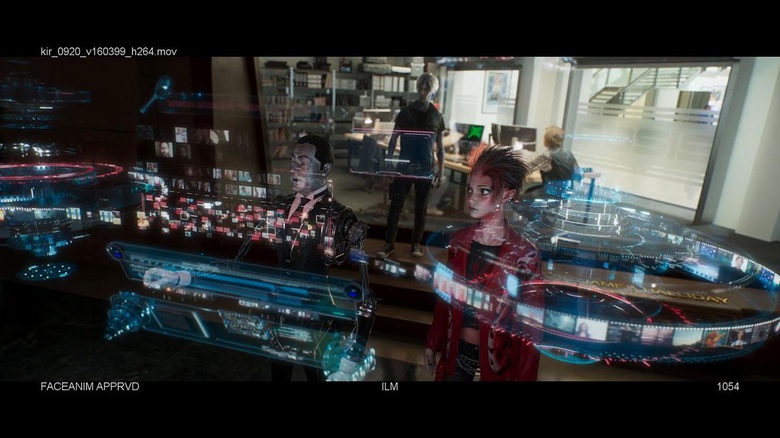 HUDs were produced for the Holographic Curator. We wanted to create a visual device that could convey a lot of content at a glance, and a holographic tape deck seemed the perfect visual metaphor to search through a decade of TV, movie, and comic content, reveals Popplestone. The physicality of the deck harked back to the 80s vibe and analogue systems; it ended up being quite a complex, with a lot of content and moving parts that required a physical twisting action to scrub through content. That interactivity alongside the glossy texture sat really well within ILMs CG world.

3D environmental graphics and devices needed to be designed such as the superhigh tech customized VR rig used by Sorrento (Ben Mendelsohn). We called it the hamster ball because once inside and activated, it formed a bubble HUD of information. We needed an OS that suggested it was a powerful computer as well as an Oasis interface. We layered up the graphic geometry like layers of an onion and designed and choreographed that sequence to work with the shot.

For IOI, the biggest challenge was to generate UI that really conveyed the power, resources and technology of IOI, corporate, militaristic, yet clean and super sophisticated, remarks Munnings. For the Oology lab screens, we devised an OS for the archive/database that could illustrate the body of work that was constantly being sifted and cross referenced for clues. We referenced the book for content (TV shows, movies, bands, and games). For the screen graphics applied to glass screens displays/ tablets/wall screens, we adapted the design language and mapped out a schematic of the Sixers setup on the floor to convey IOIs highly organized and militaristic approach.

Executing the 3D planet signage was a fun project. Most of the planet signage was there to advertise in-game locations and badge the game itself. We were given a list of what was wanted, from Planet Doom to casino to brothels to golf to hang-gliding. It works really well in the film and helps to signpost the scale and imagination of the Oasis for audience and characters.

A Rubiks Cube map of the Oasis makes an appearance. Parzival uses this holographic sector map to find Aech when he first arrives on Insipio (the landing portal when you enter the Oais), remarks Popplestone. It serves as a narrative device to reflect the scale and structure of the Oasis. The cool thing is that it directly transitions from our UI into an ILM shot, which zooms down to Planet Doom. Drone and CCTV feeds also needed to be incorporated. The challenge was to tie content in with story beats in a complex action sequence that is all about the search for Wade/Parzival, and pull all those feeds together in the surveillance van. We used reference shots from editorial (Amblin/WB) that showed an approved framework. Then we had to decipher this and create graphics that supported narrative in a three second window. We based the look on the Sixers graphic language and its a great shot for us because our graphics, mapping, drone, and CCTV footage really tell the story.

A critical mandate was to make sure that the eyes of the actors always remained visible. This was more of a consideration for the glass screens in the real world and we just subtly created space for eyes to show, notes Munnings. The information in HUDs should never obscure the users field of view anyway, so it wasnt so much of an issue. Easter Eggs are found throughout Ready Player One. We added Easter Eggs to each characters HUD inventory. When Art3mis (Olivia Cooke) is looking for her Clark Kent glasses, we also included Wonder Woman cuffs. Clips from movies appear such as Escape from New York and Back to the Future. We also put some of our own gamer tags into some of the UI scattered around the film and made up Twitter handles.

One element that needed to be carefully thought about was making sure that the graphics felt credible and authentic to the POV at all times. Our initial concepts were all designed in first-person, but we had to move away from first to third-person to reflect the real world third-person POV, states Popplestone. We separated out layers to achieve the best mechanism to suggest the depth of a 3D world in the visors/HUDs, throughout all the moving/animated sequences. Knowing how critical credibility was we refined the graphics, often on a shot per shot basis to add narrative layers that tied into the story beat and script. Its a great example of whats happening in the cross over between the two worlds, in which we are the visual bridge between the two worlds that are being created by different VFX leads.

Overall what was really nice to see during the final battle when a lot of the characters started running out of their ammunition and need to pull up their HUDs to select alternative weapons; that created a series of back to back shots that came together really well, observes Munnings. When you work on and deliver individual shots you sometimes wonder how it will all come together and we felt this sequence fit together well. Popplestone adds, It was a privilege to work with such talented and supportive teams at both Digital Domain and ILM; they turned a daunting project into a great experience that we were able to contribute to and learn a lot from.