Looking to increase quality, efficiency and the creative life of its animators, DreamWorks explores the outer limits of animated features with its new animation software, Apollo

Looking to increase quality, efficiency and the creative life of its animators, DreamWorks explores the outer limits of animated features with its new animation software, Apollo 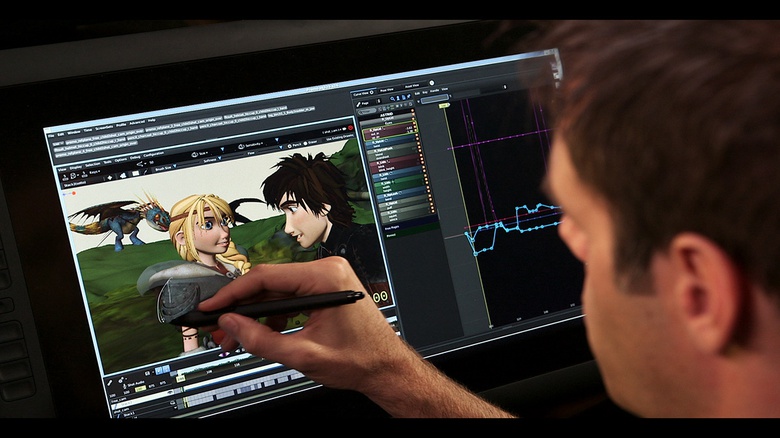 Apollos main components are Premo for animation and Torch for lighting

Sometimes, California couldnt be any more California if it donned a pink bikini and sipped on an appletini frozen yogurt smoothie under the shade of a non-native palm tree.

Case in point: Arriving at the DreamWorks campus on a sunny day in Los Angeles, the first thing we see is a health fair. Dozens of young, fresh-faced fitness purveyors, representing active lifestyle options ranging from yoga to cross-fit to spinning studios, lined up in an area that amounts to DreamWorks massive front lawn. DreamWorks employees mill about, browsing the literature and chatting among themselves, imagining the ways that they, too, can get even fitter. 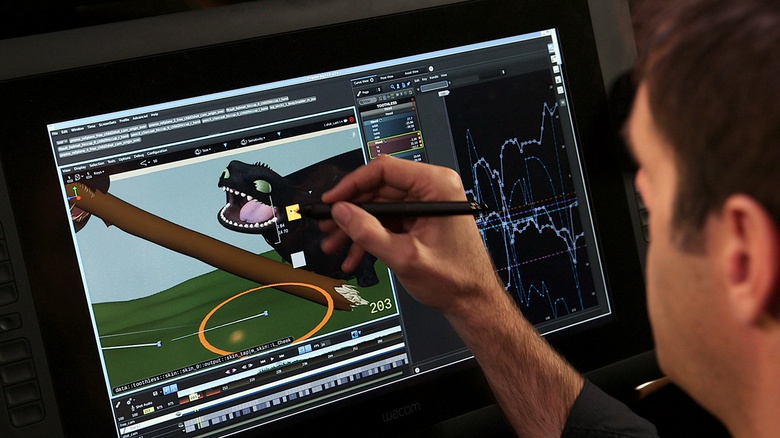 As tempting as they are, however, were not here for the fitness opportunities. Rather, were here to see how DreamWorks got its workflow in shape - namely, its development and integration of Apollo, its next-gen animation software.

Apollo was created in collaboration with Intel, over the course of roughly 5 years. The resulting software takes advantage of Intels multi-core technology, along with its hybrid cloud computing resources; essentially, DreamWorks has come up with a head-to-toe platform for visual computing, making the most of the many, many CPUs DreamWorks has both on premises and off. Its artist-friendly, fully scalable software, and helps the animation giant with nearly every aspect of making its animated films.

Essentially, Apollos main components are Premo for animation and Torch for lighting. For its part, Premo lets artists pose their characters using an intuitive tablet-based interface, and implement changes to high-res character models almost instantly. What used to take up to 20 minutes now happens in a matter of milliseconds, thanks to a more efficient code base and the softwares ability to make use of the multiple cores inside each of the animators PCs (the animators near constant rendering ping pong breaks - that is to say, actual games of ping pong between changes - are a thing of the past, for better or worse). 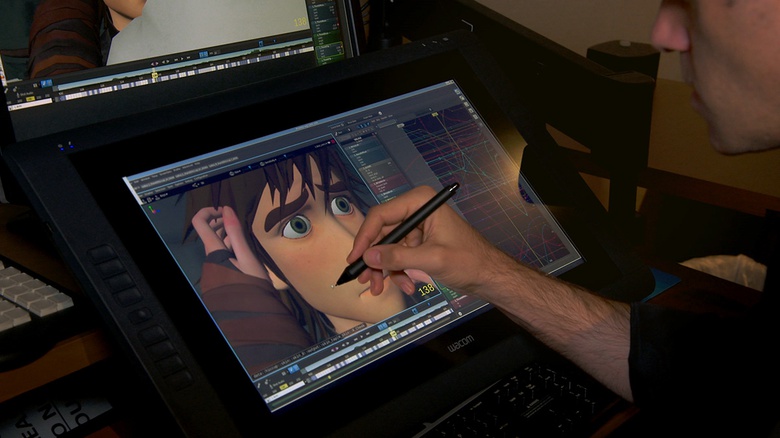 What used to take up to 20 minutes now happens in a matter of milliseconds, thanks to Apollo by DreamWorks

Premo allows artists to manipulate the skin, muscle and facial expressions of their characters in real time, which helps immensely with the creative process; its significantly more artist-friendly than Emo, which required a great deal of data entry.

We watch as Senior Animator Lief Jeffers works with multiple high-resolution characters onscreen at once, making various adjustments to each of them on-the-fly. This makes creating physically and emotionally complex interactions between characters massively more functional; for its part, Emo could only handle changes to one character at a time, often creating a disconnect for the artist when working on a scene. Its very fast in action: grabbing one of the characters upper lips with his stylus, Jeffers is able to transform it in real time without the slightest hitch, causing the corresponding muscles around the mouth contort realistically.

As an animator, when I want to interact with characters inside of a scene, the goal is always to focus on the artistry, and not be hindered by the technical limitations of the software, says Senior Animator Leif Jeffers. Having the freedom to pose a high-resolution character in real time allows me, for the first time, to focus fully on the artistry without ever having to wait for the software to catch up to what I'm thinking. 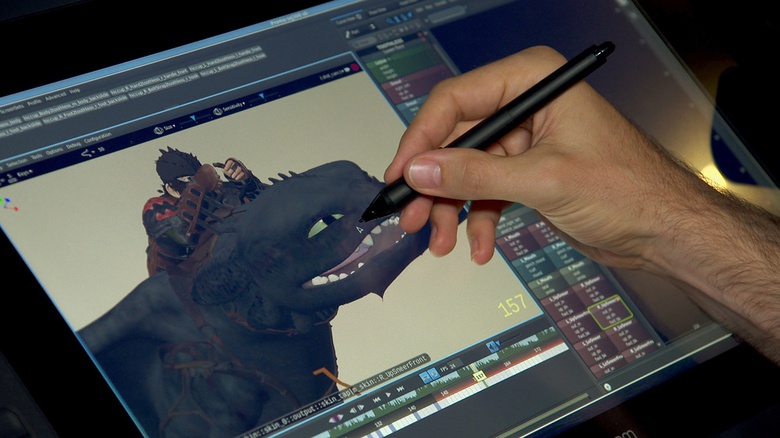 Premo allows DreamWorks artists to manipulate the skin, muscle and facial expressions of their characters in real time

Indeed, when Emo was first created, spreadsheets were the only way to animate. With the switch to Premo, Dreamworks decided to remove spreadsheets altogether and institute new methods to control animation. The graph editor allows animators to visualize every control's timing and intensity in graph form. The second method is more artistically driven through the direct manipulation of character with a Cintiq and digital pen.

With Emo, the more characters I loaded, the slower the software became, Jeffers continues. Even using low-resolution proxies didn't help with interactivity. For this reason, we would only turn on the bare essentials. This became problematic when you were trying to work out a strong composition for the shot, or animate an important interaction between two or more characters. Turning characters on and off, or switching between a low-resolution proxy to the high resolution model, was both cumbersome and time consuming. Using Premo, I can display all of the characters in a scene at their highest resolution, and interact with them in real time. This allows me to focus on artistic choices, without any slowdown from the software.

The aforementioned Torch, meanwhile, is used to design the look of a project and its environments. The production team hired a number of cinematographers, including 11-time Academy Award-nominated Director of Photography Roger Deakins, to help the lighting understand his visual approach, and how it could be applied to their digital process. An animated feature has roughly half a billion digital files, many of which include shape, color data, and texture maps, all of which are being continuously revised over the course of development; the Torch Project browser manages these assets in a more future-forward, visual approach. 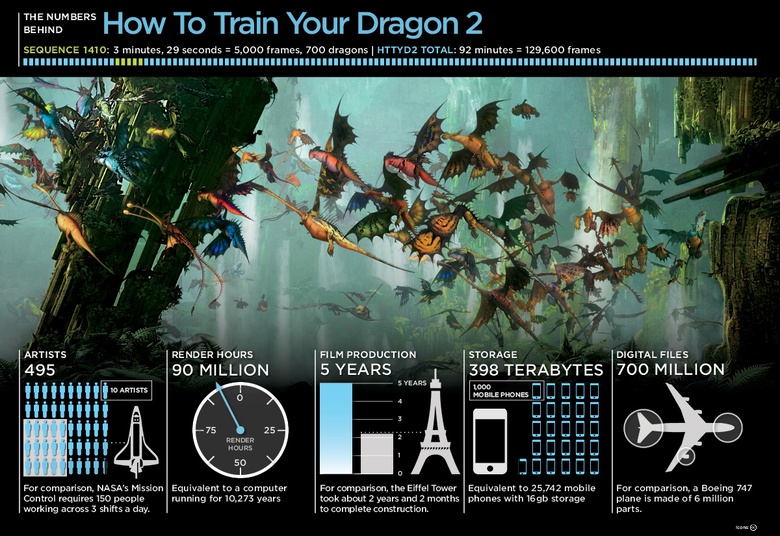 To bring to life its last feature, How to Train Your Dragon 2, the team at DreamWorks created more than 100,000 storyboards for the 90-minute film. It took more than 18 months to complete, and the animators then created more than 500 million digital files, stored across 398 terabytes. It took a fleet of cloud computers in data centers more than 90 million render hours to render the 129,600 frames in the final film. But DreamWorks had so much computing power on hand that it could render those frames inside of a week or so for the last cut. Dreamworks also shares three data centers based in their respective studios in Los Angeles, northern California and Bangalore. Each center houses HPs Generation 8 servers that are 40% faster, and like most technology these days, now also use 40-percent less power.

One of the more exciting new pieces of DreamWorks arsenal is its new video capture studio, where the director can visualize a scene before the animators draw it. Manny Francisco, DreamWorks Director of Technology for Performance Animation, shows us around the tools: 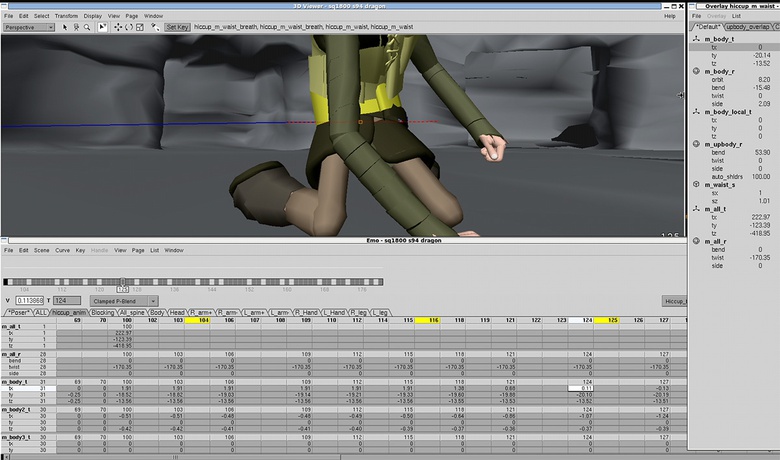 Essentially, a shoulder-mounted camera is operated in front of a giant green-screen, where the films animated characters are effectively physicalized in 3D space. This means that the camera operator can choreograph shots using traditional means - that is to say, using their hands and feet - rather than faffing aboutwith virtual cameras and the like.

We were able to try this for ourselves, and the effect is very impressive: its like shooting a live-action film with animated characters, the camera reacting without missing a beat as you pan and rotate around them. Its a fantastically intuitive way of defining the timing, blocking and cadence of individual scenes, and its become an essential part of the studios workflow. 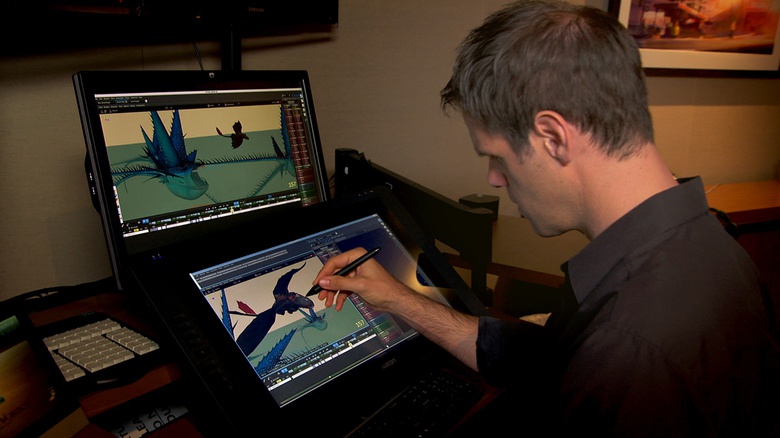 Using Premo, DreamWorks artists can display all of the characters in a scene at their highest resolution, and interact with them - all in real time

When working with film directors, the focus is about creativity and their need to convey the idea they have in their head, says Director of Technology for Performance Animation Manny Francisco. This requires a workflow design where the technology is transparent and the tools are tuned to how they want to work. The motion capture stage is successful in this because we created a method for them to use a camera in a virtual world like they would for a live action workflow. This familiarity enables them to immediately begin working without having to learn a new process.

The technology is used to solve creative problems when setting camera movements for a shot. Having a virtual world and using a virtual camera helps the filmmakers to explore the right angles and performances that help to tell the story. The data is then used by the artists as reference for what they create on the computer, thanks to the fact that the motion capture system is fully integrated into the production pipeline. The camera data is recorded in parallel with the actor performance, and digitally handed off to the respective department making the data instantly available. 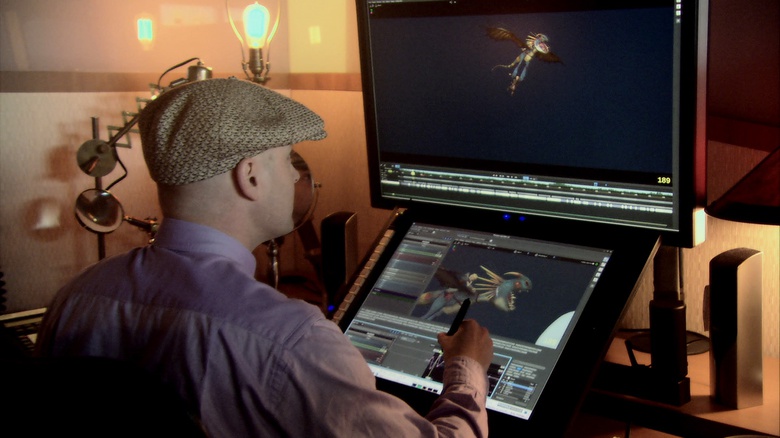 With Emo, the emphasis was on spreadsheets with names and lists of controls. With Apollo, the idea was to combine the intuitiveness and immediacy of hand-drawn animation on paper, with the tangible aspect of stop motion, where the artist can touch the character and move elements around, getting immediate feedback. Of course, Apollo brings to this recipe the many advantages of the computer, where the artist can then edit to their hearts content (or their schedules allowance, anyway).

Torch simplifies data management by showing the data in a visual graph, making the work of maintaining the correct assets for a scene easier, says Shadi Almassizadeh, workflow director and product designer for Torch. Torch also enhances shot lighting with visualization tools such as preview lighting and asset visualization in a 3D Viewer.
Almassizadehs experience as a stage lighter and visual effects artist for live-action movies provided the engineering team with a great amount of information to develop the types of tools and features that would make his workflow more intuitive and less technical. Torch enables him to light his scenes the way he expects real light to work, such as light bouncing off objects, providing a full range of options to set the mood of a scene.

There are two elements to Torch that empower my creativity, says Almassizadeh. The first is dealing with the complexity of a CG-animated movie. Our scene files have millions of objects and attributes to deal with. Using Torch, we were able to consolidate the information needed for artistry, while hiding many elements to reduce complexity. Using the data project and version control system, I also have the highest level of collaboration with my team. All the artists on the movie can do their work in parallel, and I dont have to be concerned with missing critical changes that are sent to me. 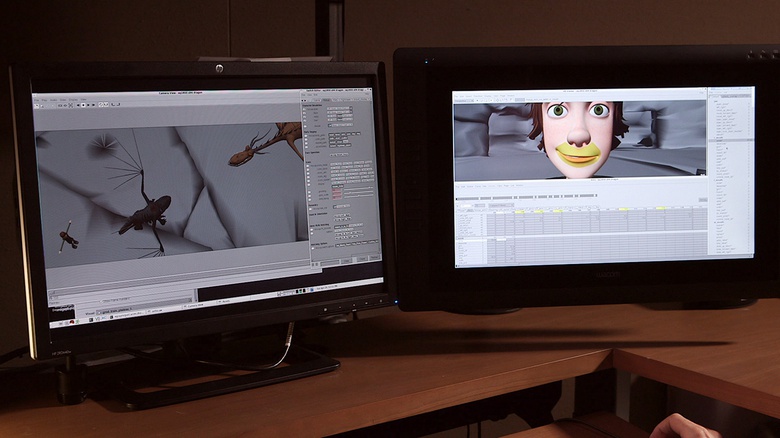 The idea for Apollo was to combine the intuitiveness of hand-drawn animation with the tangible aspect of stop motion, where artists can touch the character and get immediate feedback

DreamWorks is continuing to make rapid technological innovations for the upcoming film /Home/, slated for release next year. Itegrating Apollo is said to not only improve quality and workflow, but also reduce the budgets of the studios films to the tune of 10s of millions of dollars.

Oh, and the productivity gains are said to be enormous: Rather than releasing one film every 18 months, DreamWorks believes its now capable of releasing three movies each calendar year. Thats a mighty big leap, and what industry types like to call a competitive advantage - which is to say, the studio has no plans to license the software anytime soon.